The Help Britain Needed
to Clean the Corners of the World

At the outset, the editor acknowledges the interests of our readers are postcards and history. This article is not offensive for it simply tells the story of a family, the enterprise the patriarch created and the society in which it became popular and profitable. Please acknowledge the political incorrectness of the advertising that was so systemic nearly 100 years ago. 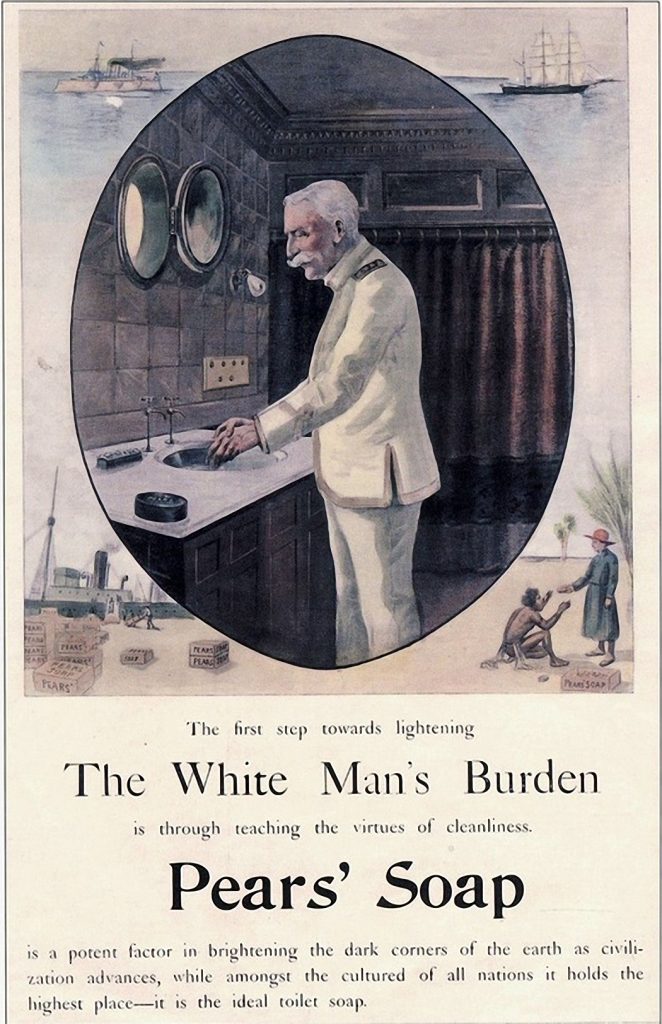 Soap! So much has been said about it. More than a century ago, Mark Twain once quipped, “Soap and education are not as sudden as a massacre, but they are more deadly in the long run.

Eoin Colfer, an Irish literary genius, wrote in his 2008 book, Airman, “All we can hope for is that he will fall into the ocean with a bar of soap in his pocket.”

I plead guilty, both quotes are taken out of context. Nevertheless, when the time between the two quotes is considered, the two together illustrate that soap is, and has been for a long time, on the minds of the civilized. Soap in the eyes of many is thought to be the solitary cure for one of the world’s most offensive conditions – foul smelling people.

A very well intended individual whose life was crafted to solve the “odor-problem” was Andrew Pears. He was the son of an English farmer, born about 1770, who moved to London around 1787. He completed his apprenticeship in 1789 and established a barber shop in Soho where he began production of several cosmetic products for both men and women.

Pears’ Soap was his first branded product and sales began in 1807. In 1835 when his grandson, Francis Pears, joined the business the firm was renamed A & F Pears, but after just three years Andrew retired leaving Francis in charge.

At the Great Exhibition of 1851, A & F Pears was awarded the prize medal for soap and the business flourished and expanded anew. In 1864, 23-year-old Thomas J. Barratt, sometimes referred to as the father of modern advertising, was appointed Pears’ bookkeeper.

Barratt didn’t last long as a bookkeeper for it was his good fortune that Mary Pears, the eldest daughter took a serious fancy to him. A native Londoner, TJ married Mary and within a year he entered the firm and became his father-in-law’s partner. 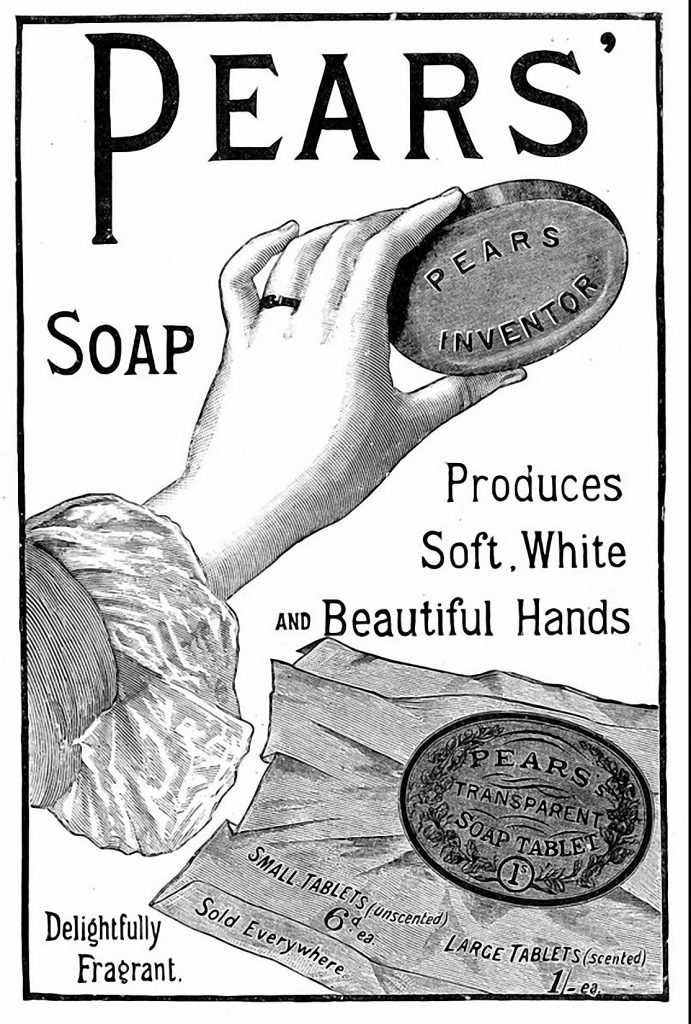 Under Barratt’s leadership, the company instituted a method of advertising that was later dubbed “brand identity,” that used easily recognized logos, memorable images, and slogans. The first one on the block came in 1866 when he coined the question, “Good morning. Have you used Pears’ soap today?” 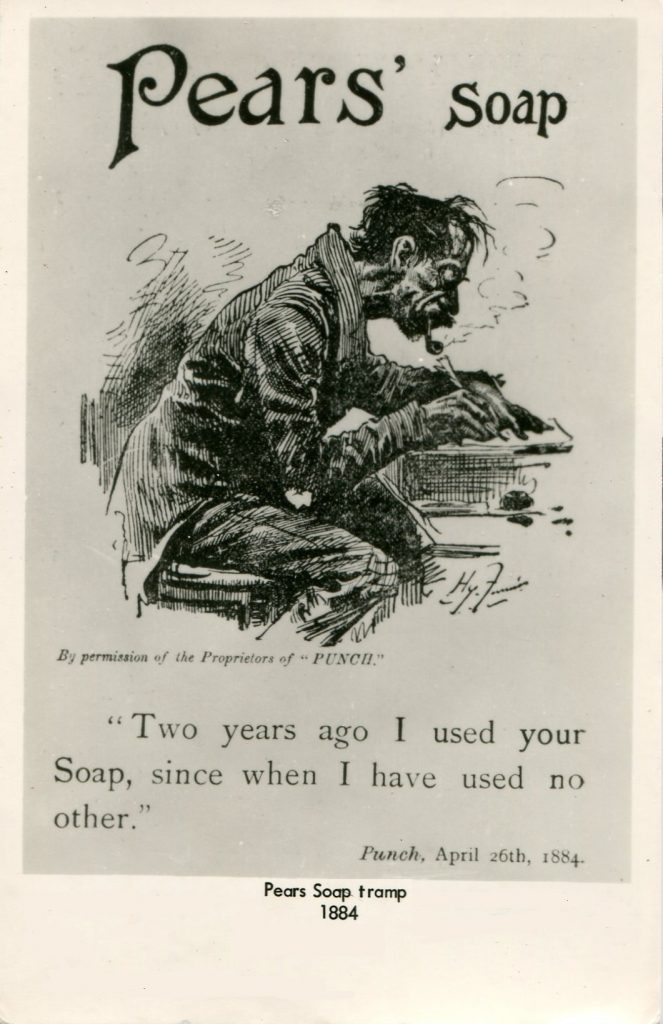 The now famous soap was the world’s first translucent soap mass-marketed under Barratt’s stewardship. Because of Barratt, A. & F. Pears initiated many new sales and marketing concepts. One famous arrangement was the use of a celebrity endorsement of their soap by Lillie Langtry, the world famous Isle of Jersey actress. Her fee was allied to her weight so she was paid ‘pound for pound’. 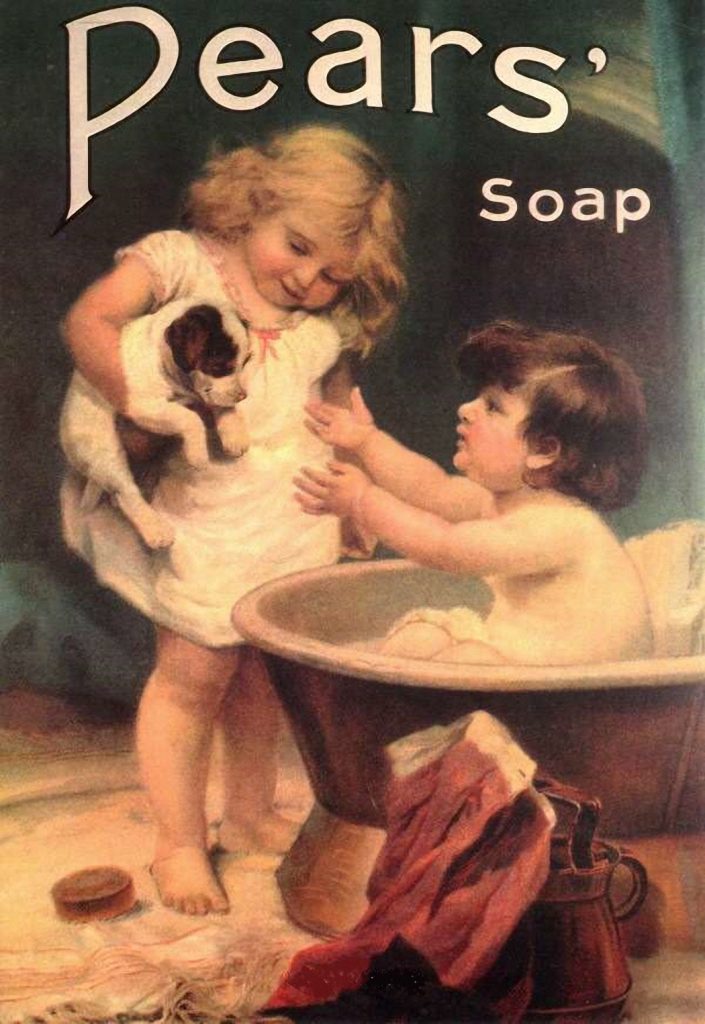 Between 1891 and 1925 Pears issued their now famous annuals, catalogs or yearbooks of available products. From the early 20th century the Pears annual “Miss Pears” competition was most notable. The contest was designed for parents to enter their children into a high-profile hunt for young brand ambassadors who would be used on packaging, which often included advertising postcards.

Above you can see four of the most famous and most collectible of the soap postcards.

The card featuring “The White Man’s Burden” is a fascinating snapshot of history, as is the Kipling poem whose title it quotes.

An advertisement for Pears Soap appears on this circa 1904 postcard of the Brooklyn Bridge in New York City. 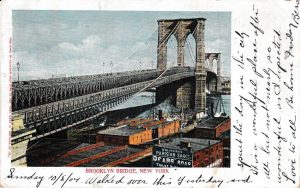 Thank you for posting this image. Aren’t we all amazed by how far advertising reaches into the world around us?