The combined Spanish Army and Navy is one of the oldest, continuously active military forces in the world. Its oldest unit is Regimiento De Infanteria Inmemorial Del Rey Nº 1 “The King’s Immortal Infantry Regiment, Number 1”. According t 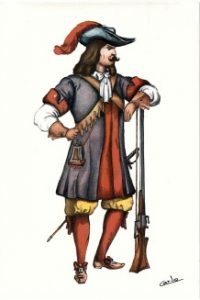 o tradition, it originated during the reign of King Fernando III. In 1248 this regiment participated in the victory over the Moors at the conquest of Seville. As of 2020 this Regiment has been in existence for 772 years. However, when the aforementioned conquest took place Spain was not yet a nation and as such, the Spanish Army did not come into being until the late 15th century during the unification of Spain under the reign of Ferdinand of Aragon and Isabella of Castile.

The Spanish Navy (Armada Española) is the maritime branch of the Spanish Armed Forces and one of the oldest active naval forces in the world. The roots of the modern Spanish navy date back to the 12th century well before the unification of Spain.

Spain also has the oldest Marine Corps in the world. (Infantería de Armada). This naval Infantry was created by Charles V in 1537. The most famous Spanish Marine is without a doubt Miguel de Cervantes, author of the novel Don Quixote [The Ingenious Gentleman Don Quixote of La Mancha], who was wounded in the Battle of Lepanto in 1571.

Throughout the 16th, 17th, and 18th centuries, the army and navy were well organized and disciplined forces with the most technologically advanced weapons and ships of all the forces in Europe. They were colorful, feared, and respected. Military careers had status, and they were sought by the aristocracy and by the most ambitious of the commoners. However, beginning in the early 19th century, the Spanish armed forces became undone by an inflated officer corps that was overly preoccupied with its status and its privileges. Promotions were slow and based on seniority and royal or civilian upper-class origins of its ranking members rather than on merit. Fighting units were starved of modern equipment because of heavy personnel costs. In addition, Spain’s military had established a tradition of frequent interventions to alter the course of internal politics in what it perceived to be the higher interests of the nation.

Uniforms and military accoutrements have been part of armed conflict everywhere in the world since humanity invented war. The very carrying of arms, both offensive and defensive like spears, clubs, shields, and helmets gave the warrior a different appearance from someone engaged in more pacific tasks. However, the idea of a military uniform, clothing all members of a unit in similar dress, is a relatively late development in the long history of human conflict. True military uniforms came into use with social and political developments in Europe.

At its most basic level, the purpose of distinctive military clothing enables soldiers to distinguish friend from foe in combat and other related confrontational situations. This led to a spread of uniformity of dress beyond the battalion level to that of most of the military forces of a kingdom or state. As permanent military establishments were developed in Europe, the practicality of uniform regulation for all troops in the service of the state became recognized by all of Europe’s nations including Spain. Additionally, the “peacock” factor brought about by attractive or distinctive uniforms could make a military career desirable to young men. Spain’s Army found that regiments with particularly striking off-duty or parade ground uniforms made it easier to attract recruits.

The first major use of Spanish Military postcards occurred during the Spanish-American War in 1898 and their employment increased in other conflicts that followed. The postcards were commissioned by the Spanish military establishment who appointed native-born photographers, illustrators, artists, and printers to produce the, “Tarjeta Postal de Campaña”- literally military campaign postcards. These were intended to enable their troops based in Spain’s overseas colonies in the Americas, the Pacific and Northern Africa to communicate with their loved ones and friends in Spain and these related civilians could in turn use them to respond to the troops in the field. In either case versa free of postage. Interestingly, the US Army also provided franking privileges to its troops during the Spanish-American war that were endorsed with the words, “Soldiers Mail.”

The Rif War of 1911 to 1927 between Spain and the Berber tribes of the Rif mountains region of Morocco saw an even greater use of the military postcard system. This one depicts the capture of two Moorish tribesmen after a firefight. 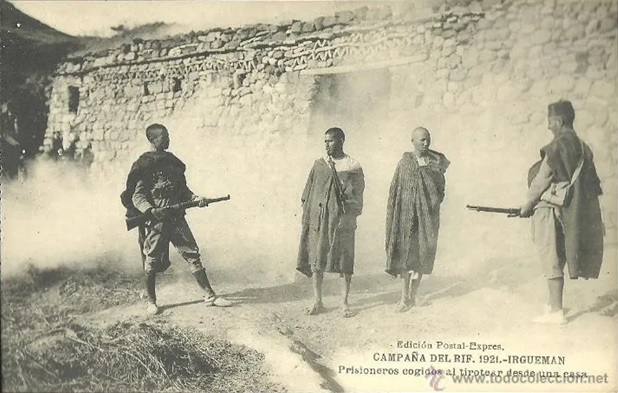 Image from the Rif War

Later in the Spanish Civil war of 1936-1939, the authoritarian government of Generalissimo Francisco Franco revived the campaign postcard for the use of those Spanish who were loyal to him. In addition, illustrated posters, postcards, pamphlets as well as leaflets dropped by air became a major form of propaganda by both Republican and Nationalist forces. Throughout the duration of the conflict, both factions employed artists and others to rally support. The headline on this leaflet states, Spain for the Spanish! And the text below asks, how much Spanish blood has been spilt and for whom, as Fascists Hitler and Mussolini have a celebratory glass of wine over the skeletons of Spanish dead. 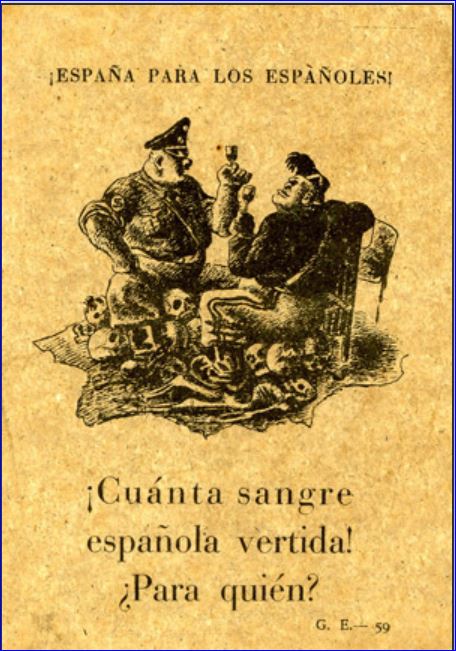 The Spanish Armed forces reintroduced its campaign postcards during the Ifni War, sometimes called the Forgotten War in Spain (la Guerra Olvidada) a series of armed incursions into Spanish West Africa by Moroccan insurgents that began on October 23, 1957 and culminated in June 1958 with the abortive siege of Sidi Ifni. The combatants were Spanish land, air and naval forces and elements of the Moroccan Army of Liberation which, no longer tied down in conflicts with the French, committed a significant portion of its resources and manpower to the capture of Spanish possessions in Morocco. Here is a sample of an unused one that features a sketch of a member of the Spain’s elite Legion Española. The Legion was created in the 1920s and is modeled after the French Foreign Legion. 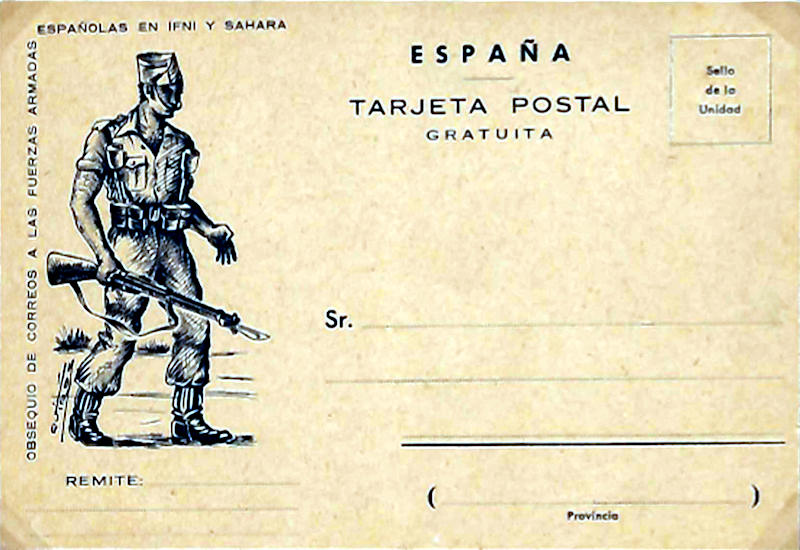 Postcard from the Ifni War

During the early 1970s the Joint Army Staff Command (Estado Mayor Conjunto del Ejército de España) published a series of post cards of Spanish officers and soldiers, sailors, marines, and airmen of other ranks in formal dress and utilitarian uniforms through the ages. Here is a sampling of those 176 Spanish military uniformed themed postcards that I have collected over the years. 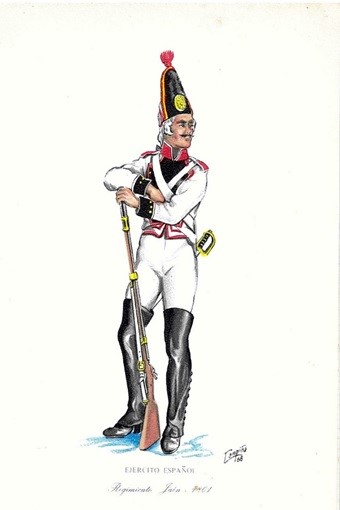 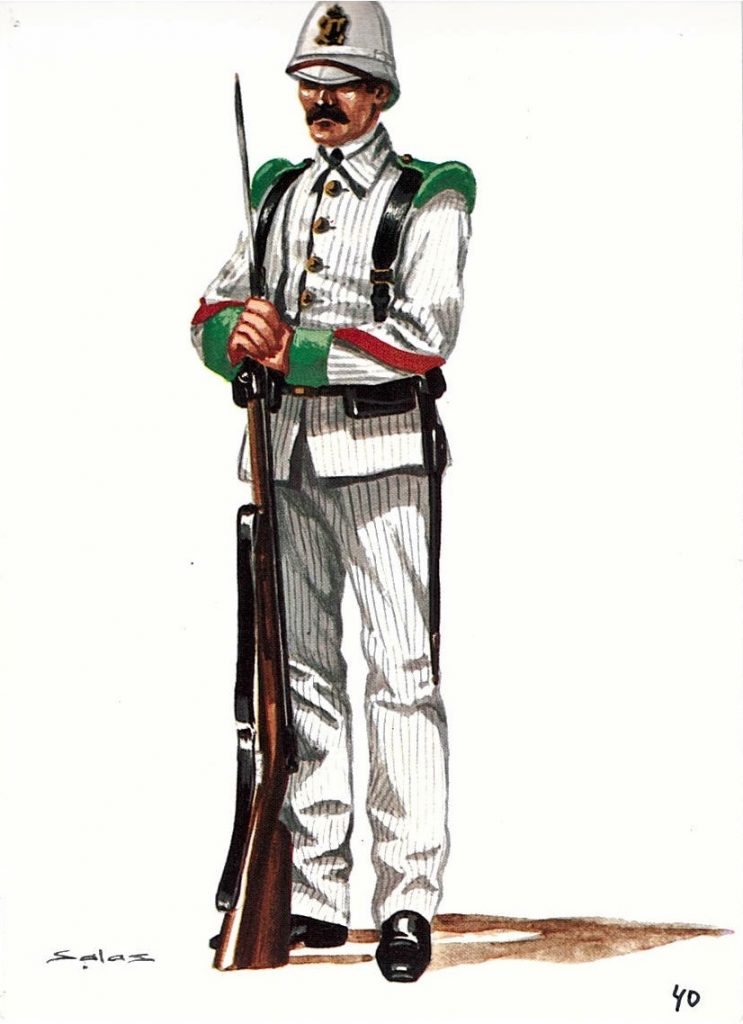 Captain, Corps of Military Chaplains of the Infantry
1853 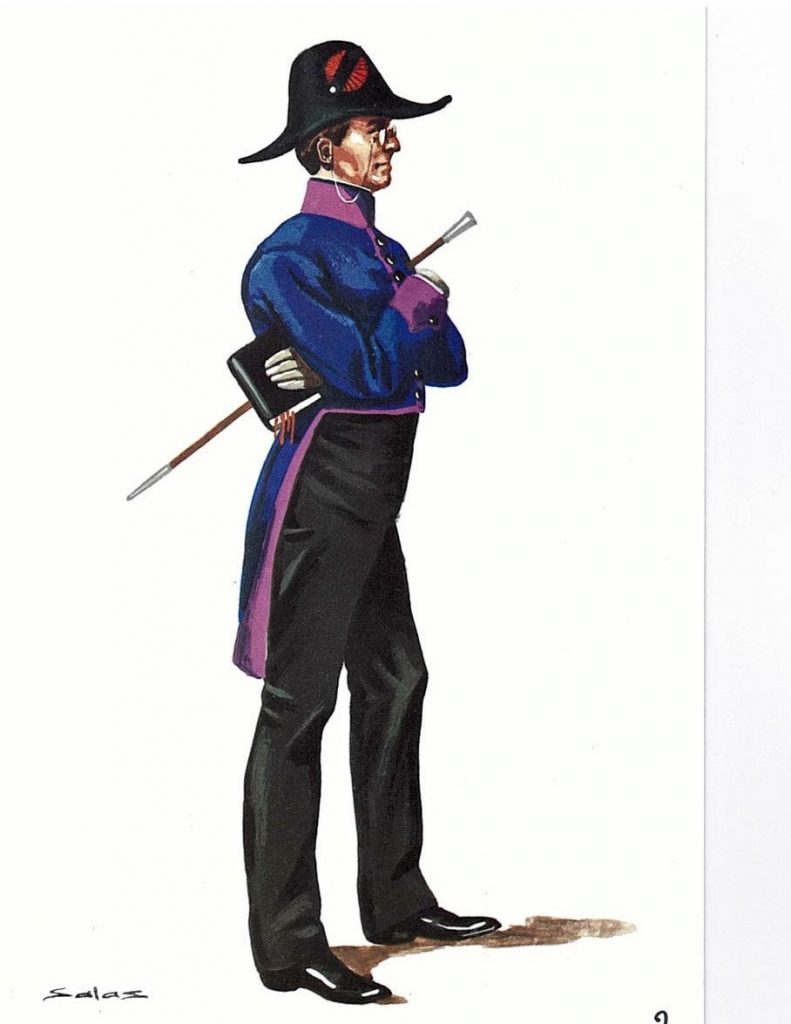 Finally, this photocard is from the Teniente Batallón No. 14. “Tiradores de las Alturas”. (Sharpshooters of the Highlands). The man is Don José Delgado León. (1861-1898) He is my maternal great-grandfather. 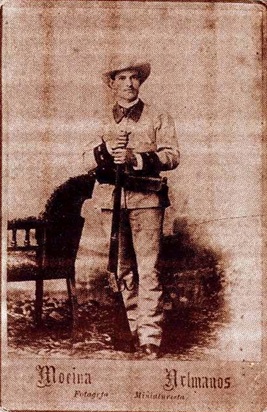 Miguel Hernández is an independent historian who specializes in teaching history beyond the walls of the traditional classroom. He organizes walking tours of historic sites in New York. He has served as a professor, board member and author. He is retired from the U.S. Justice Department and once served as the mayor of Ossining, New York.
PrevPreviousKnow-It-All Quiz 5
NextDavidson College, North CarolinaNext
2 Comments
Oldest
Newest Most Voted
Inline Feedbacks
View all comments
Bob Kozak

My years of studying Spanish in school helped me in reading some of the text printed on the cards depicted in this interesting article.

Very interesting. Thanks very much.