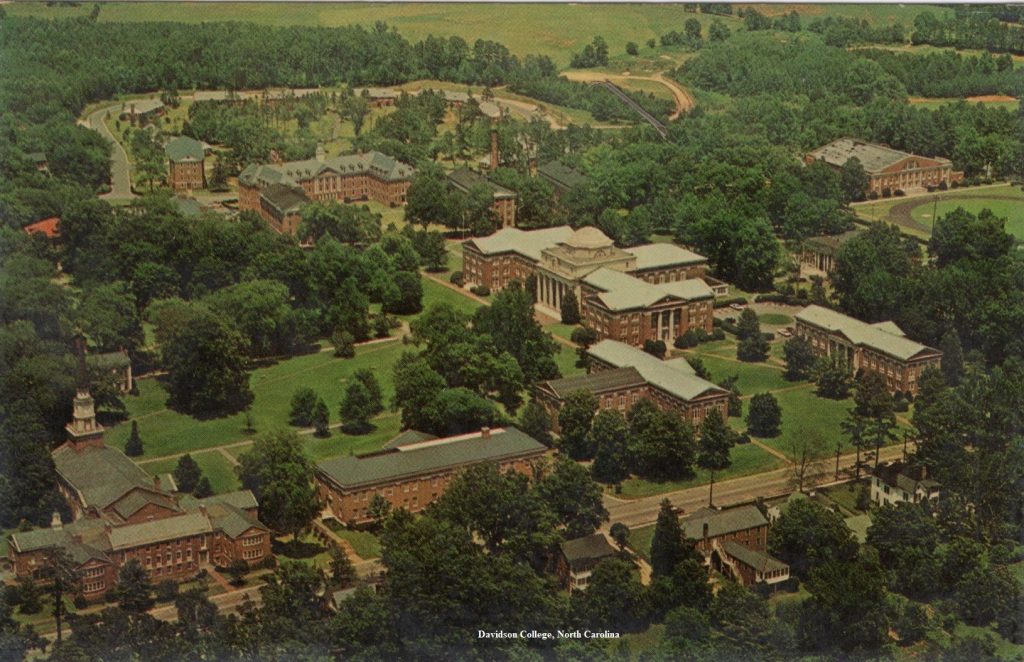 A committee of eight men from the Concord Presbytery convened on March 13, 1835. They were given the charge of finding a location for a new school for boys in western North Carolina. To ensure greater accessibility, the committee was instructed to choose a location on the eastern side of the Catawba River within 15 miles of Beatties Ford. A site equidistant from Charlotte, Statesville, Concord and Salisbury was secured.

Two tracts of land totaling 469 acres were purchased from the Davidson family on January 1, 1836. The school was named for General William Lee Davidson, a revolutionary war general who was shot and killed by Cornwallis in the battle at Cowan’s Ford (NC) on February 1, 1781.

A month after the meeting, in April 1835, the cornerstone was laid for the school’s first building. Rev. Robert Hall Morrison, Pastor of Sugaw Creek Presbyterian Church, was appointed president.

The decision was made to open the school in March 1837. Teaching began with 65 students on March 12.  Three dormitory buildings of four rooms each were ready. Four men occupied each room and when these filled, students were allowed to build shacks for their individual use with the privilege of selling them at the end of their courses.

The school opened as a manual labor school designed to teach boys farming as well as religion, and book studies. The students were not disciplined, and the manual labor aspect failed. The school lost money in its attempt to raise food. A typical wagon ride to bring firewood in from the woods would result in more firewood being left along the roadside because of reckless driving than would arrive on campus. It wasn’t long before there were more tools stuffed under buildings out of site than could be found in the tool sheds. 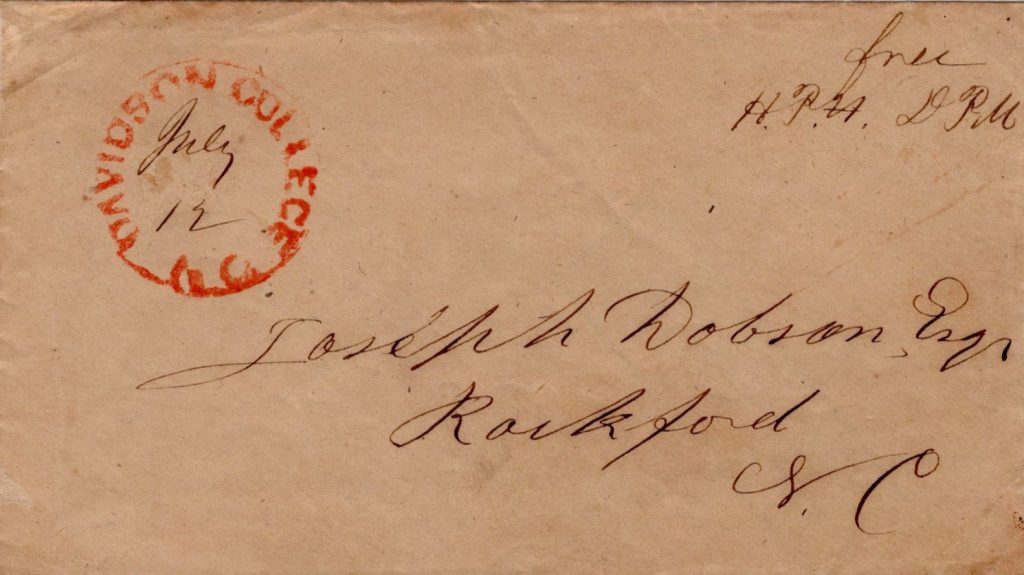 The first post office in Davidson College opened in 1837.

A turning point at the school came in 1854, the year that Hanson Helper received the post office’s first handstamp and also the year Major D. H. Hill, after six years of service at Washington and Lee University, came to Davidson as a math professor. Hill graduated from West Point, entered the army, and fought in the Mexican war with General Joseph E. Johnston. Johnston noted that “D. H. Hill was the bravest man in the army in Mexico.” From then until 1859, when he left to start the Charlotte Military Institute, Hill provided the guidance and maintained the order at the school. Davidson adopted many of the policies that existed in other military schools.

The college struggled with financials until 1856. Stability came when a Salisbury cotton planter, Maxwell Chambers stipulated in his will that $250,000 would go to Davidson. The gift made Davidson the most heavily endowed institution south of Princeton. In 1857, the $90,000 Chambers building, designed by Andrew Jackson Davis of New York, was erected; Chambers also endowed chairs in science and philosophy. 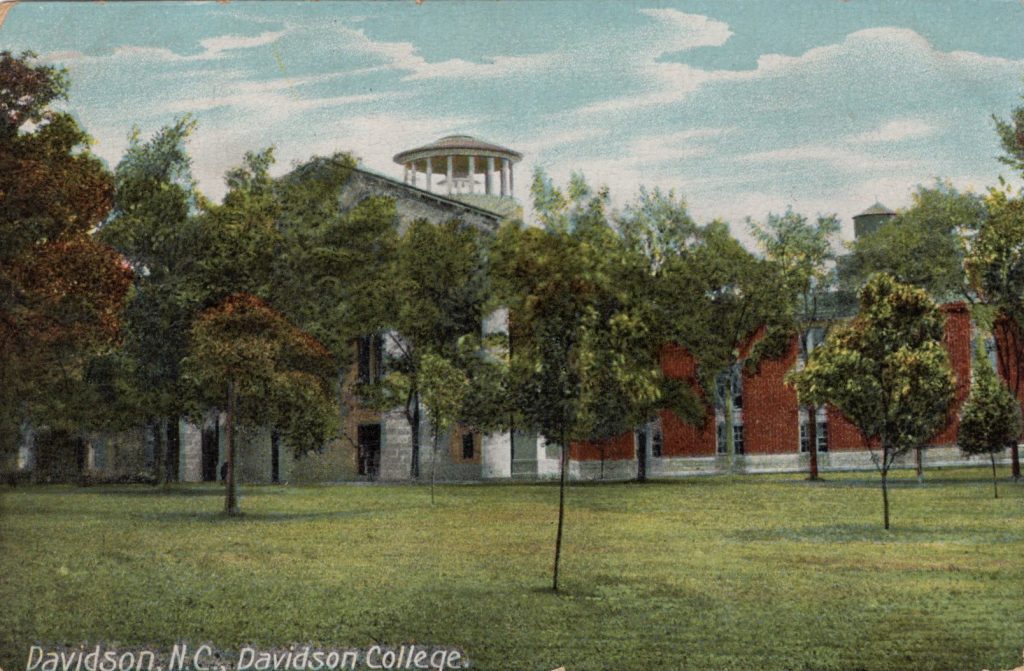 As a result of Chamber’s gifts, Davidson’s future was secured. It was one of two schools in North Carolina to remain open during the Civil War in part because of efforts of President John Lycan Kirkpatrick. He integrated a preparatory course into the curriculum; still, when the conflict ended, Davidson enrolled only 24 students, but academic progress continued.

Shortly after the war, Davidson obtained one of its most famous students. In 1873 at age  17, Thomas Woodrow Wilson entered the school. His father was a pastor of the Presbyterian Church in Wilmington, North Carolina. Wilson remained at school through the examinations that year and had a 91.5 average, however, due to illness, he went home before commencement exercises and spent the following year in study at home.

While Woodrow Wilson was President, he visited Charlotte to make a speech in 1915 in celebration of May 20 — Mecklenburg Declaration Day.  After his speech, he asked to be excused and quietly slipped away to visit his old alma mater. At 5:00 p.m. he and Mrs. Wilson motored up to the college expecting to find a quiet campus with most everyone in Charlotte. The Wilsons were surprised when they arrived. They found the campus swarming with well-wishers.

During the 1920s, the college expanded its curriculum to include both classical and modern languages as well as Bachelor of Science degrees. In 1921, the Chambers Building burned, but was replaced with a new $600,000 edifice, thanks to the Rockefellers. 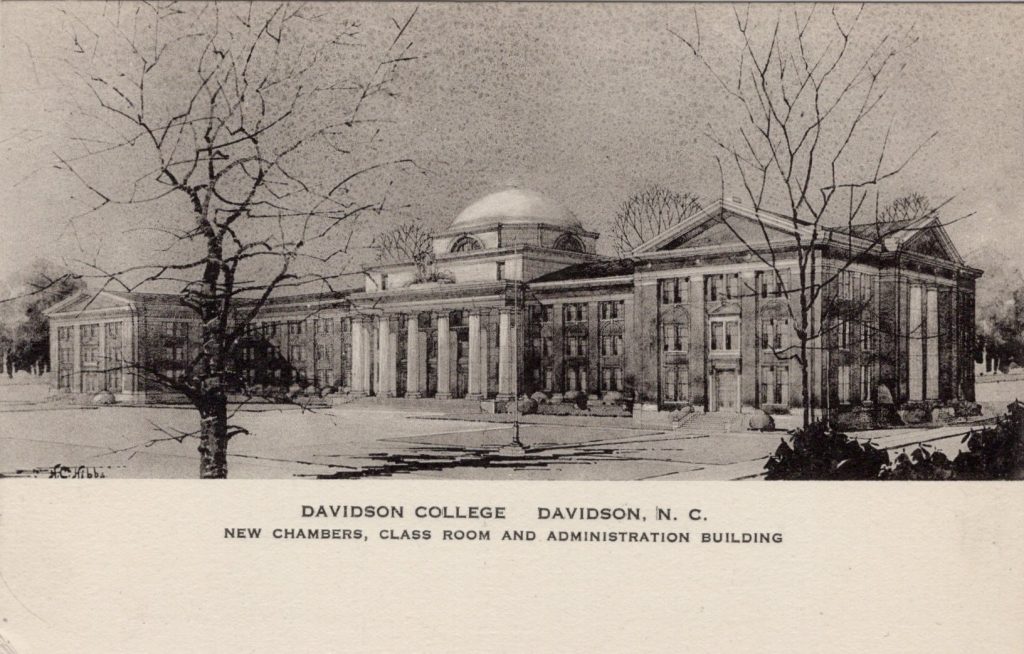 Even though Davidson College was not a medical school, a great advancement in medicine had its beginning on campus. Though Dartmouth College is given credit for taking the first x-ray picture around January 24, 1896, evidence indicates that Osmond L. Barringer of Charlotte made an x-ray picture of a cadaver’s hand on January 12, 1896 – 12 days before the work done at Dartmouth. 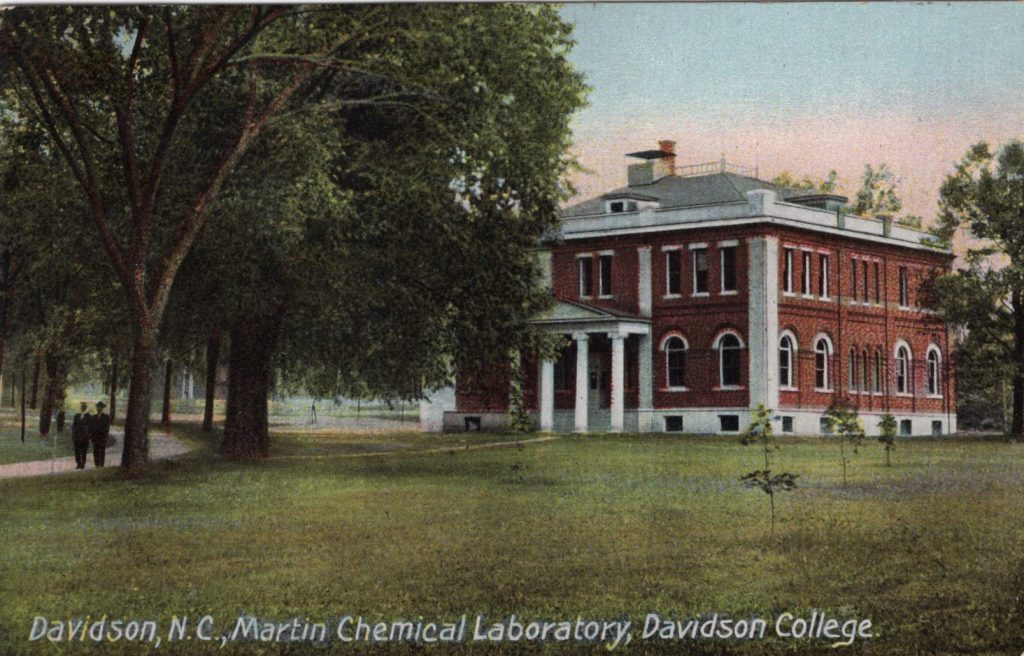 Several weeks later Dr. H. L. Smith published the first x-ray photo in the Charlotte Observer and used the x-ray to determine the location of a thimble stuck in a child’s throat which was later removed by three Charlotte surgeons – one of the first such operations ever performed.

Without a doubt the impact of Davidson upon the region and the nation has been unbelievably greater than indicated by its modest enrollment. The 1960s witnessed the introduction of the flexible Blue Sky Curriculum, and in 1972, Davidson began admitting women. The 1980s saw the construction of six residence facilities and a new sports complex, as well as a visual arts building in 1993.

Thomas W. Wilson, as he was known at Davidson, became President of the United States, yet other alumni included U. S. Secretary of State Dean Rusk and North Carolina governors Robert Glenn, James Holshouser, and James Martin.

Today, the school has 1,843 students enrolled, a faculty of 201 and offers more than 850 courses each year.

Tony Crumbley has been a collector of stamps and postal history since childhood. He has authored numerous articles over his career as a philatelist. He is the current Co-Editor of the North Carolina Postal History Journal, a job he has had for over 25 years. He is a General in the Civil War Philatelic Society where he served as president. He lives with his wife, Renea, in Charlotte, North Carolina, and is the retired Vice President of Research for the Charlotte Chamber of Commerce.
PrevPreviousSpanish Military Postcards
NextWładysław T. BendaNext
3 Comments
Oldest
Newest Most Voted
Inline Feedbacks
View all comments
Bob Kozak

An interesting article with plenty of information about a school I knew about primarily from my years of following college sports.

Nice article about Davidson… They were a college basketball power house in the late ’60’s.