A colleague for many years retired the same day I did. Instead of moving to the sunny south, Sydney and Dean decided their retirement would be spent in the icy north. They sold their home in two days and later that month bought an over-sized rancher along the shore of an ocean inlet only a few miles from Acadia National Park. The house faced south-west and the picture windows provided views of approaching icy storms in the winter and watercolor vistas filled with sloop-sails in summer.

We visited the first year they lived there – that was 22 years ago. We haven’t seen them since. But, we have a very vivid memory of a dinner we had during that visit. Remember Sydney and Dean had only been in Maine about six months and we were first-time visitors.

The waitress greeted us and with a perky smile she asked if we cared for cocktails. Two gins and tonic, a Bloody Mary, and a Brandy Alexander were ordered. Her waitress smile broadened when she said, “You guys sound funny, are you from Away?”

Our friends had been in Maine long enough to understand, but we were mystified by the question.

Away? Where’s Away? The question was asked as if, Away was a real place.

Dean answered her question with the explanation that they had retired to the village along the inlet and that we were old friends from Away. Sydney chimed in and told the young miss that in our case, Away was New Jersey.

To this day, my wife and I call the state of Maine, Away. It seems that anyplace that isn’t home is Away.

Let’s go away, to Away. Humor is funnier there.

When they met the first time, a down-easter asked a transplant from Pennsylvania if he was a native Mainer. The recently arrived replied, “No sir, but my daughter is, she was born right after we moved here.

The down-easter studied the man for a minute, leaned forward and said, “My cat had kittens in the oven once. That didn’t make them kittens muffins.” 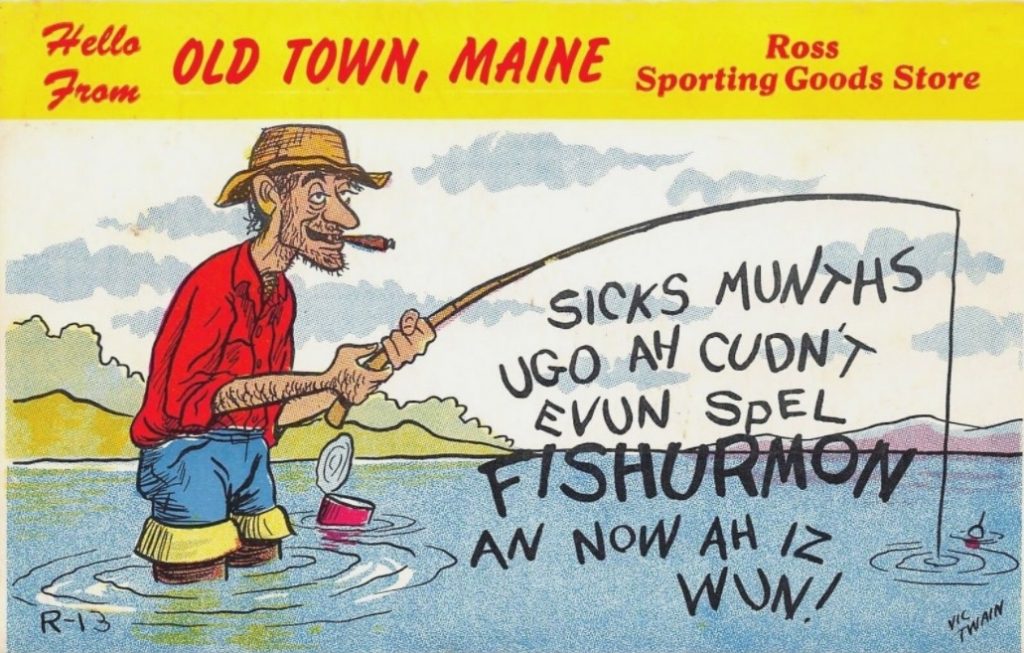 He continues, “The reason why we Mainers have so many snappy answers is simple. It’s because we are asked a lot of numb questions!”

A perfect example of a numb question and the terse response it deserves is captured by the following:
“Lived here all your life?”
“Not yet.”

Such reluctant repartee between locals and tourists is normal. The tourist needs to state his intent:
“I’ve come to Maine to see your beautiful state.”
“Good luck, finding it.”

The facts as we know them are, we have listened to Maine humor for decades and never recognized it. Characters like Jessica Fletcher played by Angela Lansbury in Murder, She Wrote, and Dr. Benjamin Franklin “Hawkeye” Pierce played by Alan Alda in M*A*S*H have made us laugh at ourselves and helped us recognize what is funny when the times seem out of sync with the tick-tock of the times. 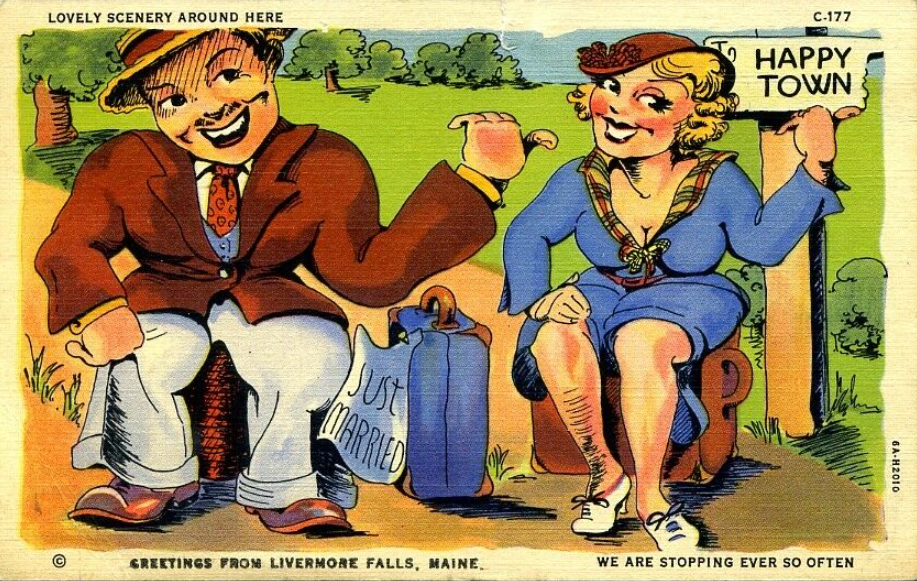 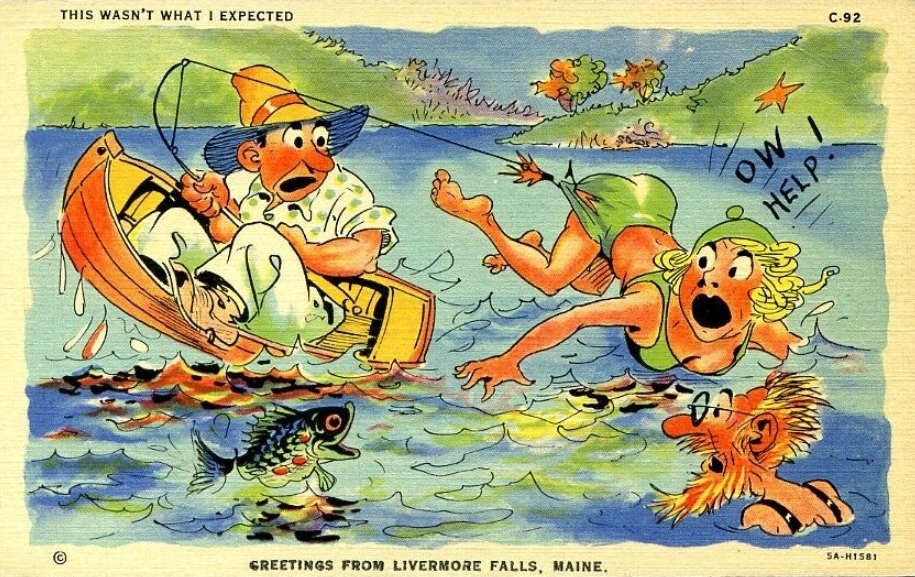 In his treatises on Maine humor, Tim Sample summarizes with, “People in rural Maine don’t want to be the Noble Savage, they’re not even elevating the work ethic. Most have never been more than 50 miles from home, but in a certain kind of way, they’ve seen it all. Seeing is one thing, understanding is much more and realizing the deal is cruel when life has to forge agreements with things like babies, world wars, tourists from away, and that great Maine philosopher Immanuel Kant. 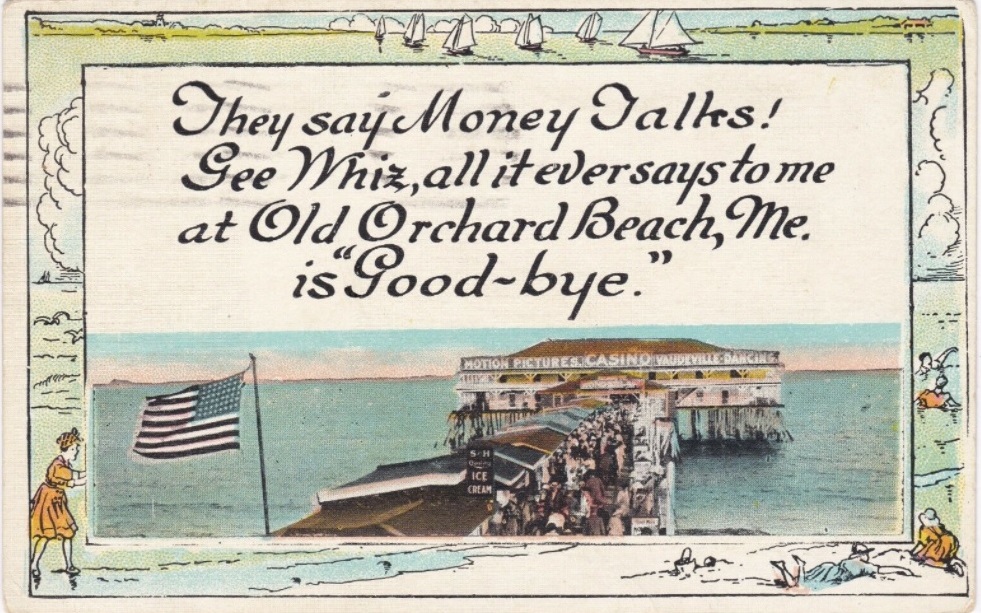 There is much to laugh about, everywhere! It’s just funnier when you’re Away!

Ray Hahn is a retired educator, but he has never stopped teaching. His decades of researching, writing and editing a newsletter for the South Jersey Postcard Club has been a world-class education in trivia. In addition to postcard collecting, Ray’s other interests include history, genealogy, and touring the world with his wife Marie. Ray often advises his readers to "Join me as we explore the world one postcard at a time." Ray and Marie live in New Jersey.
PrevPreviousHelp Us Solve the Mystery of this Card
NextLittle People PostcardsNext
3 Comments
Oldest
Newest Most Voted
Inline Feedbacks
View all comments
Irene

I’ve been to Maine once and all I remember is how cold it was! In summer!

Having seen similar cards from places several states distant from Maine, it’s obvious that some of the “Down East” humor is more or less universal.

Love the article, as does my brother who moved to Maine a few years ago!