Postcard collectors frequently generate interest in the topic of “freak show” performers, people who appeared in circuses and carnivals. The cards that are most popular are those of little people. 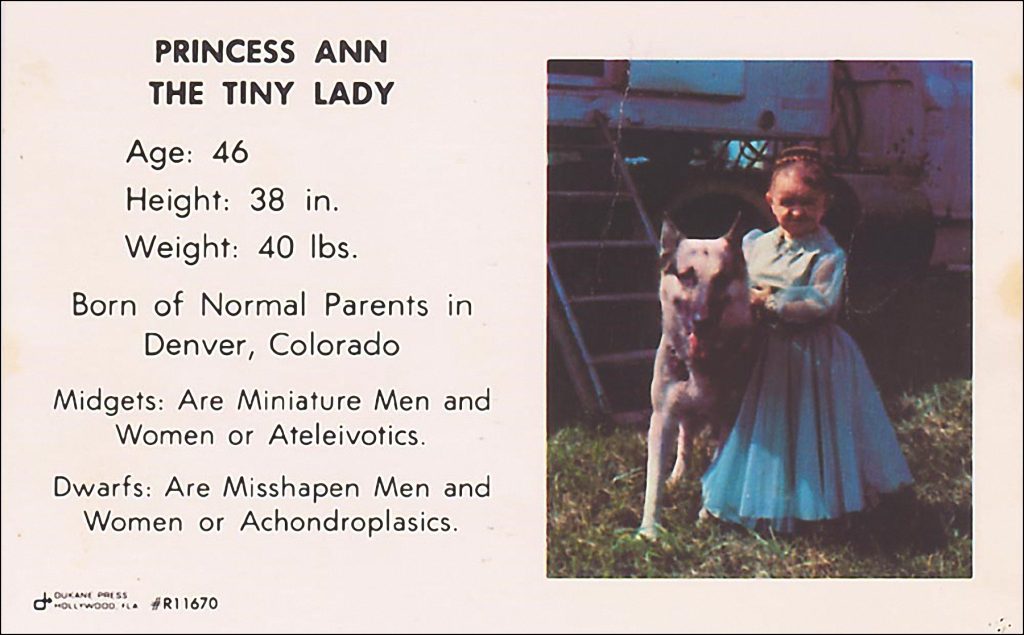 Tiny people, whose proportions are just like ours, have always been a topic of interest. Circus impresario P.T. Barnum coined the term “midget” when General Tom Thumb joined his circus; that term is now considered derogatory.

Dwarf, on the other hand, was a term that referred to very short people who had disproportionate short arms, legs, or heads, and some facial features in common. Today, the more appropriate term is “little people,” referring to adults standing less than 4-feet, 10-inches tall.

Because jobs for little people have always been hard to come by, many have traditionally turned to show business in one form or another. That involves everything from exhibiting themselves in fairs, carnivals, dime museums, and circuses to appearing in movies (like “The Wizard of Oz” and its spoof, “Somewhere Under the Rainbow”) or on television (as in “Fantasy Island” or the more contemporary reality show “Little People, Big World”).

Midgets posed with giants are popular postcard subjects, as are performing midget troupes of singers and dancers, little families, and midget weddings.

Herve Villechaize made the phrase “De plane! De plane!” part of American culture in his role as Tattoo in the hit TV series “Fantasy Island” (1977-84). As Mr. Roarke’s (Ricardo Mantalban) sidekick, Tattoo would thus announce the arrival of the week’s guests to the island, before crazily driving his pint-sized go-kart to see the newcomers.

Born in Paris, France in 1943 to average-sized parents, Herve enrolled in art school at 16 and is the youngest artist with a painting in the Museum of Paris. His father was a surgeon and his three brothers were a banker, a politician, and an actor-director. His adult height was 3-feet, 11 inches. Changing careers from painting to acting, Herve played the evil Nick Nack in the James Bond movie “The Man with the Golden Gun.” He married Camille Hagen — the willowy 5-foot, 8-inch stand-in for Kate Jackson on “Charlie’s Angels” — in 1980, winning her heart when he painted her portrait, though the marriage didn’t last. 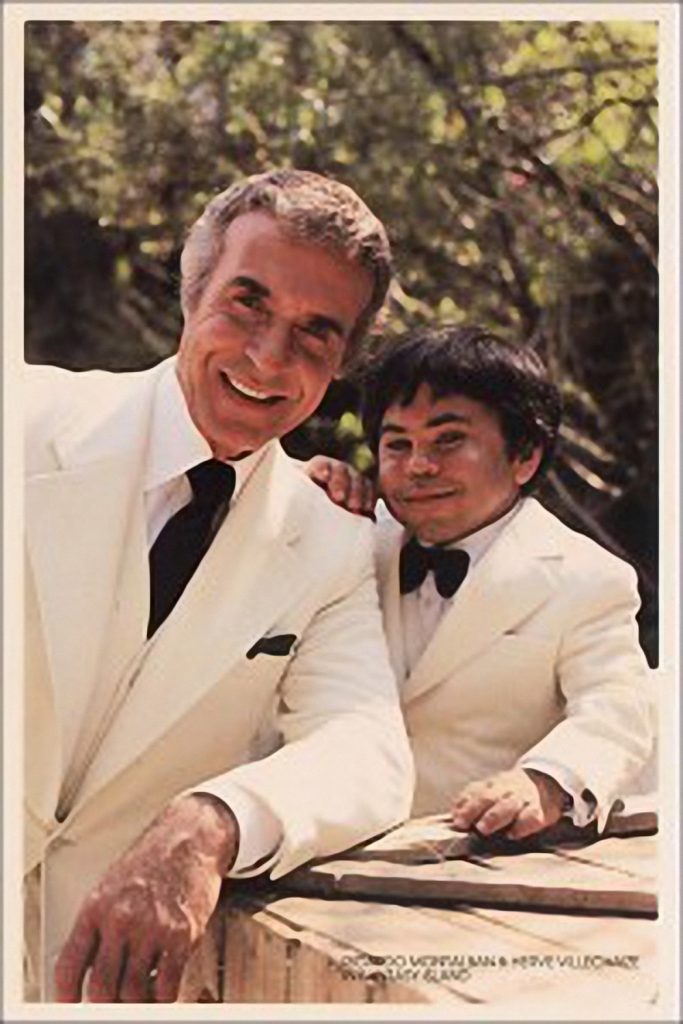 In his later years, Herve became part owner of a restaurant and ultimately retired to his 1½-acre San Fernando Valley ranch. He became a volunteer, helping abused children and sick animals. As a result of depression due to health problems, he committed suicide in 1993 at the age of 50.

Villechaize — the first little person to get star billing as a regular in a TV series — always insisted on being called a midget and unfailingly rejected any parts where he was treated as a child or put on display. 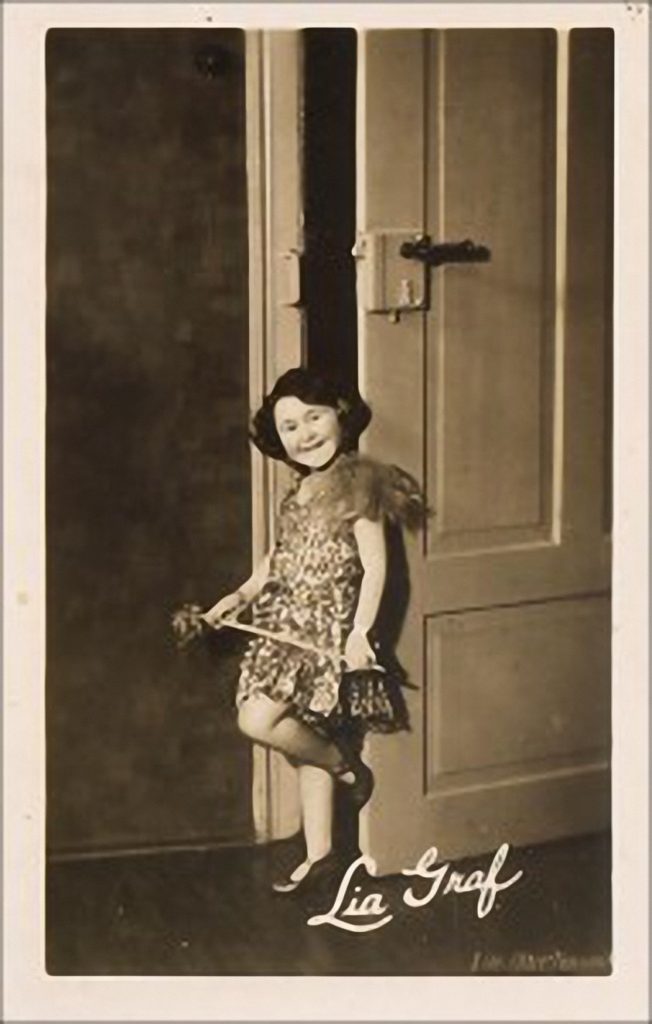 Lya Graf got her 15 minutes of American fame in 1933, when she was photographed sitting in the lap of financier J.P. Morgan in the Senate Caucus Room. This was a publicity stunt by her quick-thinking press agent Charles Leef.

“Gangway!” he cried. “The smallest lady in the world wants to meet the richest man in the world!” and he plunked Lya into Morgan’s lap. Morgan benefited too — after the famous photo and his conversation with the smiling 22-inch-tall lady, his public image changed from that of a greedy, ruthless political enemy of President Roosevelt to a benign old man.

Born Margaret Furthmann into a Jewish family in 1913, Lya Graf worked in circuses and sideshows in her native Germany before moving to America to travel with circuses during the 1920s and 1930s. In spite of her shy, sensitive nature, she became a popular Ringling Brothers Barnum & Bailey Circus attraction and loved going sightseeing as she traveled the country.

After her “meeting” with Morgan, she worked at Coney Island, charging visitors a quarter to hear her tell of her adventure in Washington. In 1935, her family returned to their native country — but it had changed. The Nuremburg laws had taken German citizenship away from the Jews and in 1937 Lya was arrested as a “useless person.”

In 1941 she and her family were taken to the concentration camp at Auschwitz. They were never heard from again.

The Doll Family, also known as the Earles, was a group of three sisters and their brother who performed in sideshows and circuses in the United States from the 1920s to the 1950s, when they retired to Sarasota, Florida.

Natives of Stolpen, Germany, the Dolls had three average-sized siblings and average-sized parents. Sometime after Harry and Grace became “Hans and Gretel” and started performing in sideshows, they were “discovered” by Bert Earles, who brought them to the United States to tour with the “101 Ranch Wild West Show” in 1914. 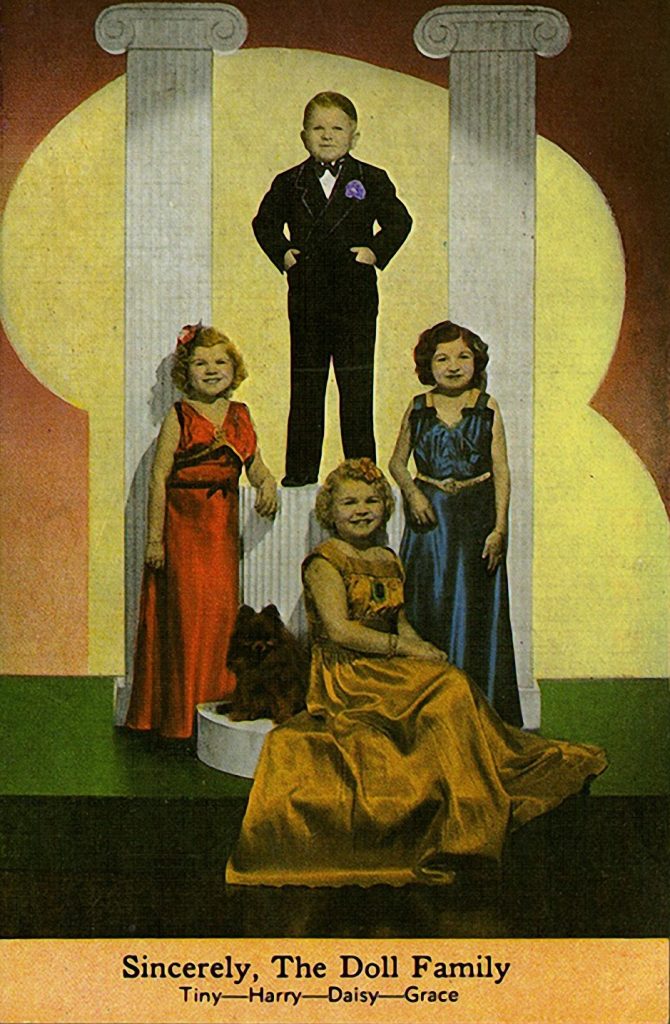 Grace and Harry lived with the Earle family in California and, during the 1920s, Tiny and Daisy joined them. In the 1930s they joined the Ringling Brothers and Barnum & Bailey circus where they rode horses, sang, and danced. They also appeared in movies, acting in comedies with Laurel & Hardy, appearing in Tod Browning’s “Freaks” and became Munchkins in “The Wizard of Oz.” (Harry was featured as a member of the Lollipop Guild.)

Daisy was married briefly in 1942 to a normal-sized man, but the marriage lasted only a year. Otherwise, the siblings always lived and worked together, appearing in traveling sideshows until their retirement in 1958. Their new modular home in a gated community, called the Doll’s House, was completely furnished with small furniture, and the entire family lived there until their deaths. 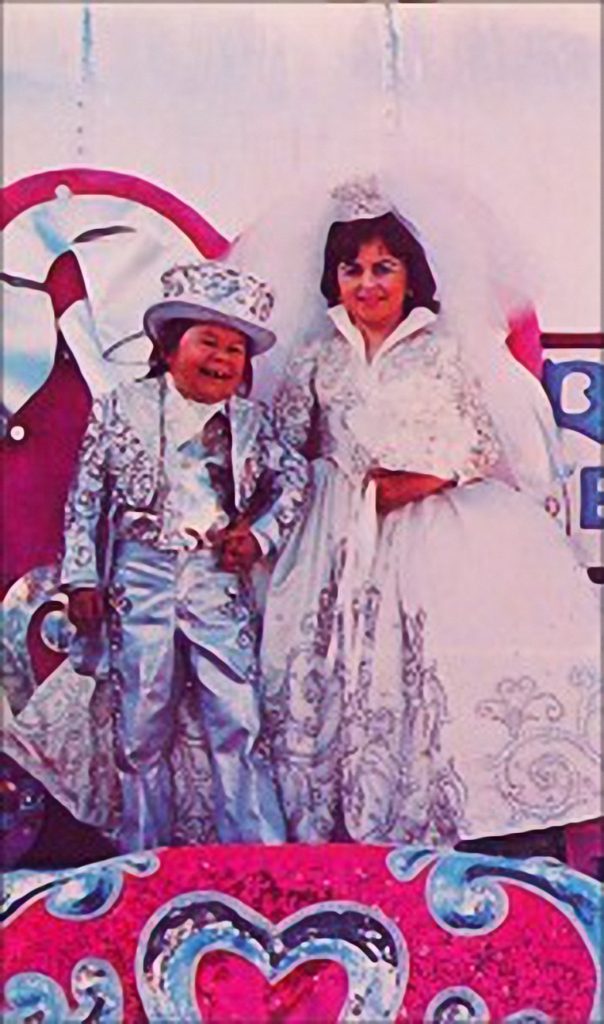 Michu was born Mihaly Meszaros in Budapest, Hungary. You may remember him as the alien Alf in the popular 1986-1990 television show of the same name. At 2-feet 9 inches, he wore a furry body costume whenever a full-length shot of Alf was shown.

Among his other show business appearances were roles in “H.R. Puf’nstuff” and “Look Who’s Talking.” Michu played Hans, the butler in the horror film “Waxworks and the cult film “Freaked” when he played George Ramirez, the mutant. He also appeared as circus midgets in “Big Top Pee-Wee” and “Warlock.”

He is shown here, before his television and movie career, at the Ringling Brothers Barnum & Bailey Circus, where he performed in countless weddings with his “wife” Juliana during the 1970s.

In a show of dubious honor, Hawthorne, California, named its shortest street “Michu Lane” in the 1980s. Last known to live in Beverly Hills, Michu’s hobbies included smoking giant cigars. He is rumored to have died in 2006.

Postcards of little people are generally moderately priced (for contemporary performers), but pre-1920 cards of lesser-known people can be expensive. Offshoot collections include cartes de visite and cabinet photos from the 1800s, which are generally more expensive. 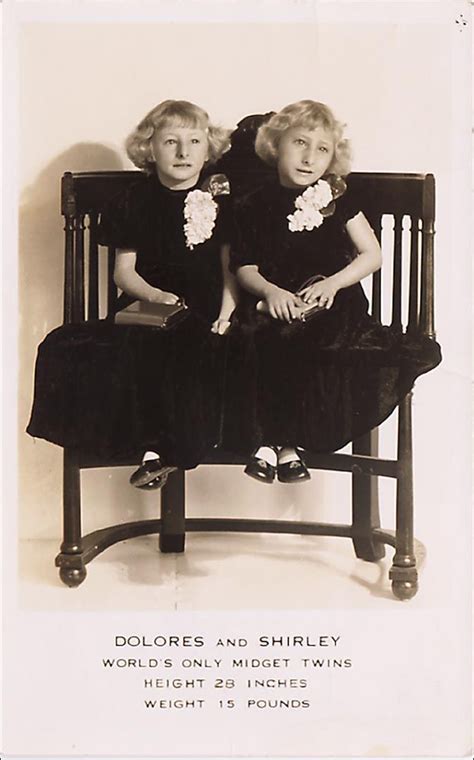 Occasionally, a vigilant collector can even find tiny twins, such as  Dolores & Shirley. 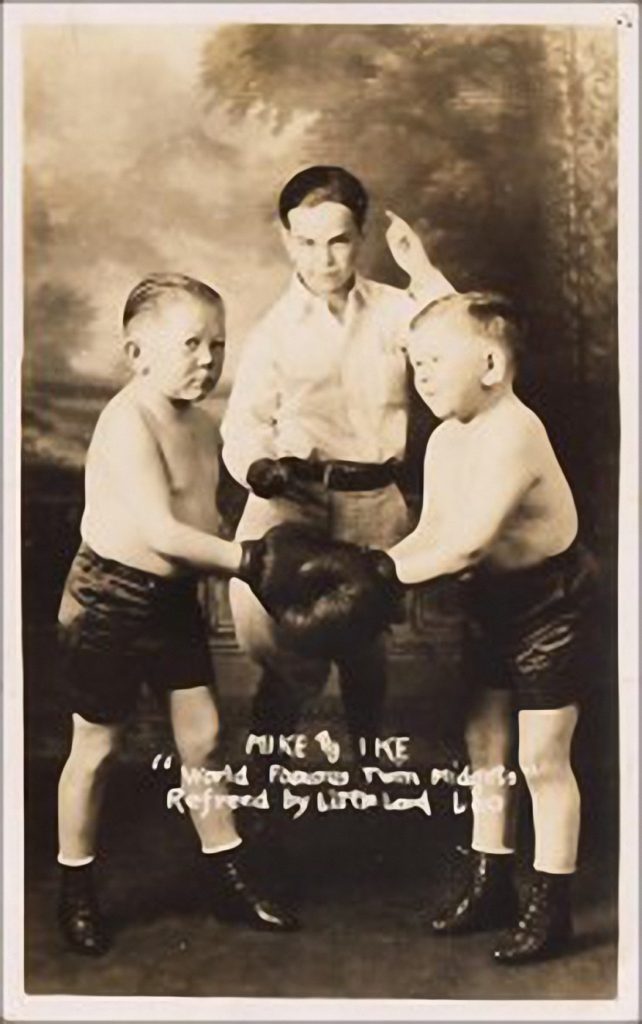 These unusual real photo postcards are worth more than most little people cards.

Condition is less critical than with other postcards, since collectors often seek midgets and dwarfs that are new to their collections or want to collect every single postcard available of a particular person or family. More important is that the card is identified, showing the name (preferably the full name) and some personal history, since many little people used stage names. 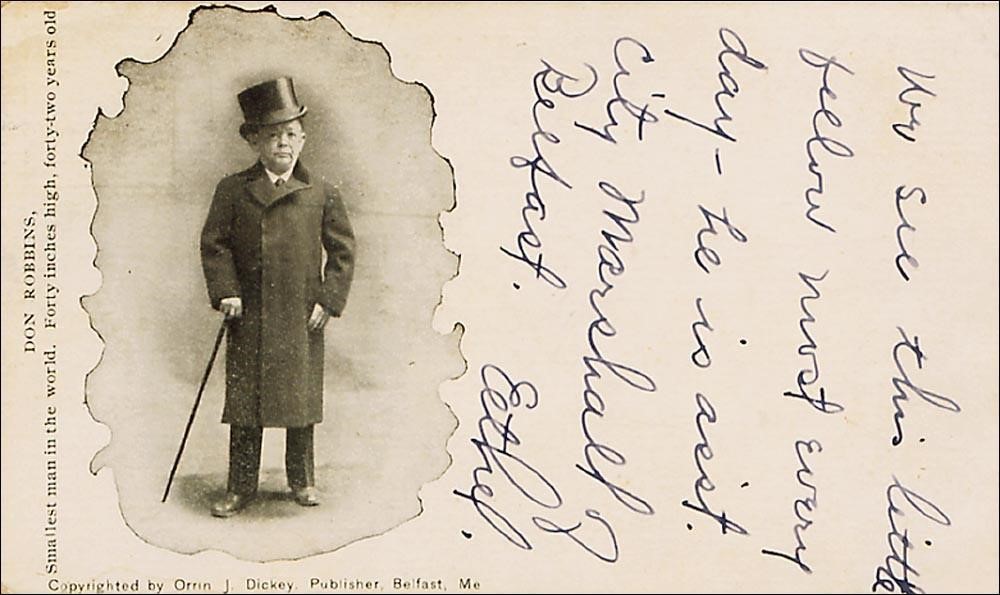 Don Robbins, 40 inches tall. The hand-written message reads
“We see this little fellow most every day – he is ass’t City Marshall of Belfast,”
which makes this postcard a treasure. Postmarked 1911.

Bonnie Wilpon is the author of Postcard History of Sarasota and Bradenton, Florida and Postcard History of Hollywood, Florida (published by Arcadia Books) and is a postcard dealer and collector in Tampa, Florida. She is Membership Chair of the Sunshine Post Card Club and a Contributing Editor for Postcard History. Bonnie can be contacted at: bonnpon@att.net.
PrevPreviousHumor from Away
NextThe Unforgettable VoiceNext
7 Comments
Oldest
Newest Most Voted
Inline Feedbacks
View all comments
Bob Kozak

I was familiar with Villechaize and Michu, but the other names were new to me. Since I’m about 5’10”, it’s not my place to prescribe, but I feel that “midget” confers more dignity than “little person” does.

What a group of people is called is always a challenge. Back in the day, “midget” was commonly used to describe a perfectly proportioned little person, while “dwarf” was the common label for a mis-proportioned little person. I used the “Little People” appellation because the Little People Of America, the large non-profit founded by Billy Barty, uses that term. Glad I could introduce you to some new famous people!

In the early 1980s I bought a trio of similar reprint cards in San Francisco. All look like side show acts. Two explicitly reference the 1939-40 Golden Gate International Exposition (S.F.’s Treasure island). The third, also shown in this article, lacks any legend besides “The Doll Family.” I have always assumed that this card too was sold at the GGIE. Here is one of the other GGIE cards. 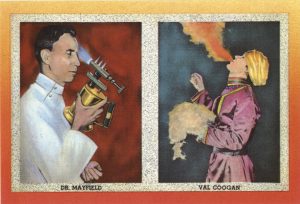 Thanks for the great illustrations! There are many reproductions around, since the vintage images can be scarce and pricey. There were many sideshow acts at World’s Fairs and Expos since they always attracted lots of attention. Some of the repros have comic captions; some that were originally black and white have been colorized. All are fun to collect!

Here is the other GGIE card. I don’t think I have any others. I did come across a period (1940s) plastic lenticular (not a postcard) of a scantily dressed animated dancing woman. It likely came from a fair.

There used to be two postcard stores in San Francisco that sold new, old, and reproduction cards including some promoting themselves. I have not been there in many years. One (Quantity postcards) still has a web presence. 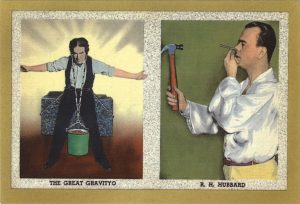 Thank you for a fascinating article. I enjoyed learning about The Little People.

I have a postcard showing a little lady called Anni Graf. She is dressed in a long white dress and carries a bouquet. I wonder if the name is wrong or whether Lya Graf had a sister similar to herself?