The word ephemera is defined as, “things that exist or are used or enjoyed for only a short time such as items of collectible memorabilia, typically written or printed items, that were originally expected to have only short-term usefulness or popularity.”  That definition is a mouthful and far different from the colloquial term that defines ephemera as something with no lasting significance. In today’s digital world, less is printed and as a result, photos and postcards of present are sent in the form of texts and emails. Gone are the days of the abundant tangible letter, the tattered photo in a wallet, the shopping list tucked in a purse or a postcard pinned to the refrigerator. Rather, these memories exist on cell phones and laptops and in a blink of an eye, these cherished memories, far too often, disappear from the record of the past, never to make history. What was once a form of communication, today ephemera has become artifact – especially postcards.

Postcard collecting is a big industry and sales can skyrocket with the right combination of factors, which include the artist or photographer, the subject, and the media. Years ago, I stumbled across a shoebox of postcards, which from sales on the internet, paid my rent for three months. Over a decade has passed since I became a personal property appraiser and liquidator. That shoebox was my first insight, not only into the monetary value of postcards, but more importantly, their historical significance.

As an estate liquidator, I come across many interesting estates, but not always as colorful as our recent discovery of a little-known artist named L. H. “Dude” Larsen. Larsen was a well-known businessman, Utah state senator, and distributor of postcards across the United States.

Although Larsen was a successful producer of postcards in the mid-20th century, the public was unaware that his cards were based on original artwork. So, it was refreshing to research an estate and uncover so much history just sitting in a closet.

The process of liquidating an estate can become personal as the research opens a private window into a life and its time. While sales and history of Larsen’s postcards can be found, there are no public records of auction prices for his original art. When work like this comes along, it is an obligation and duty to introduce it for others to enjoy. In this instance, shedding light on the lesser known part of this postcard mogul’s humble beginnings and his endeavor to carve out a piece of history.

Larsen had been painting since he was a teen and often wrote poetry to accompany his art, such as Sunset, painted in 1943. 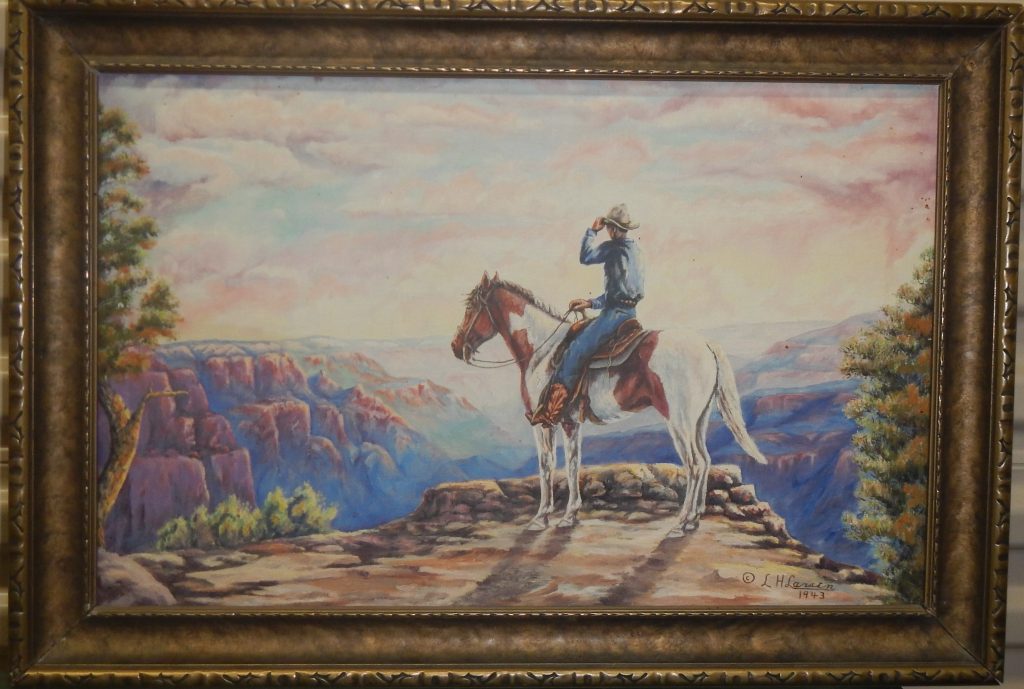 “With a glow of Admiration
The master artist of them all
Paints the Western skies at sunset
To bring His love, to our recall.”

During the Depression, the young Larsen took a break from his ranch life in Utah by spending several months in Washington, DC, painting murals in government buildings. The wage did not pay enough to live in Washington, and upon suggestions from others he returned home and established a postcard business based on his art. That brief respite had a powerful impact as he turned his love of painting the Western landscape into a very successful business.

Along with his wife Dot, a shop was set up and in 1938, his first postcard order was produced by E.G.B. Co. ​Travelling through the U.S. taking orders personally, his paintings and humor would play out on postcards for years and become part of the western Americana collected today.

As the popularity of western frontier eased, Larsen’s art that had been captured on postcards seemed to be a way of life lost. While postcard collecting is still very active, collecting original artwork is a different market. One example of the vast difference from art to postcard is Larsen’s Battle Mountain. This painting is a large oil on canvas, painted in 1947, and is encased in a museum-quality frame measuring 46 x 65 inches – pretty intimidating next to postcard No. 52. 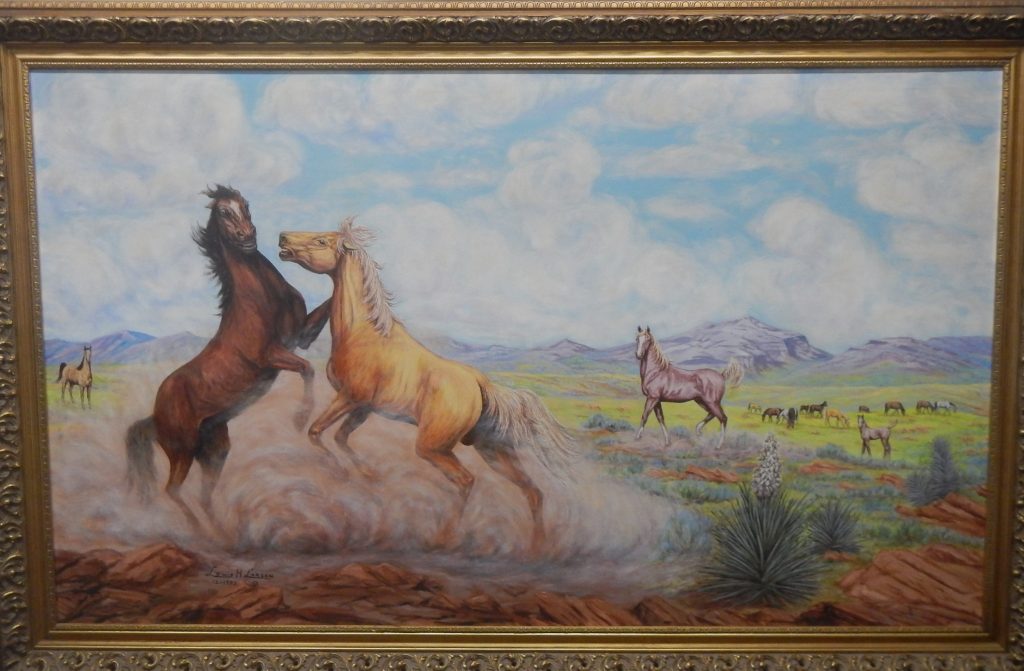 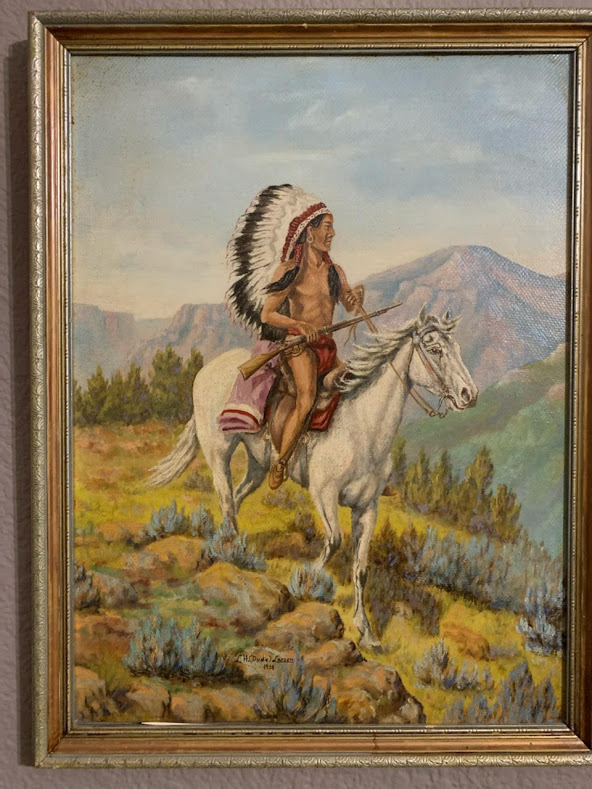 There were 14 original works by Dude and Dot Larsen uncovered on this estate in the little town of Woodland, California. The paintings were part of an estate belonging to Larsen’s son and daughter-in-law who preserved the paintings since L. H. Larsen passed in 1997. In addition to the art, the estate has over a thousand postcards, including a collection of black and white cards and large hand drawn storyboards illustrating the work of Hoke Denetsosie, a Navajo artist- illustrator. Also, in the collection are several etched copper stamps used for hand printing postcards.

To sell paintings without auction prices seems a formidable task for those up to the challenge, but a task that could prove futile without established auction values. Upon consultation with a few art dealers, I established a value for the paintings and proceeded, but with reserve prices. One of the paintings that sold from the estate was The Chief, painted in 1938, by Dot Larsen.

Another painting showcasing Larsen’s masterful ability to capture the mood was The New Range Ahead, completed in 1939. One of his earlier oils on board, the painting has an eerie quality of transporting the viewer right into the landscape, as if you were painted-in right across from the forlorn cowboy. Larsen’s art seems to catch viewers off guard, bringing them in and revealing so much, but they are not saddened by the cowboy, rather right along with him. 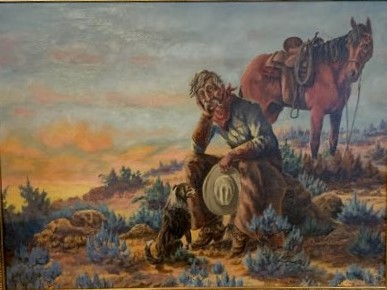 The New Range Ahead

Currently, the sales of these paintings have been reported and will make it into the various venues that record an artist’s sold work. 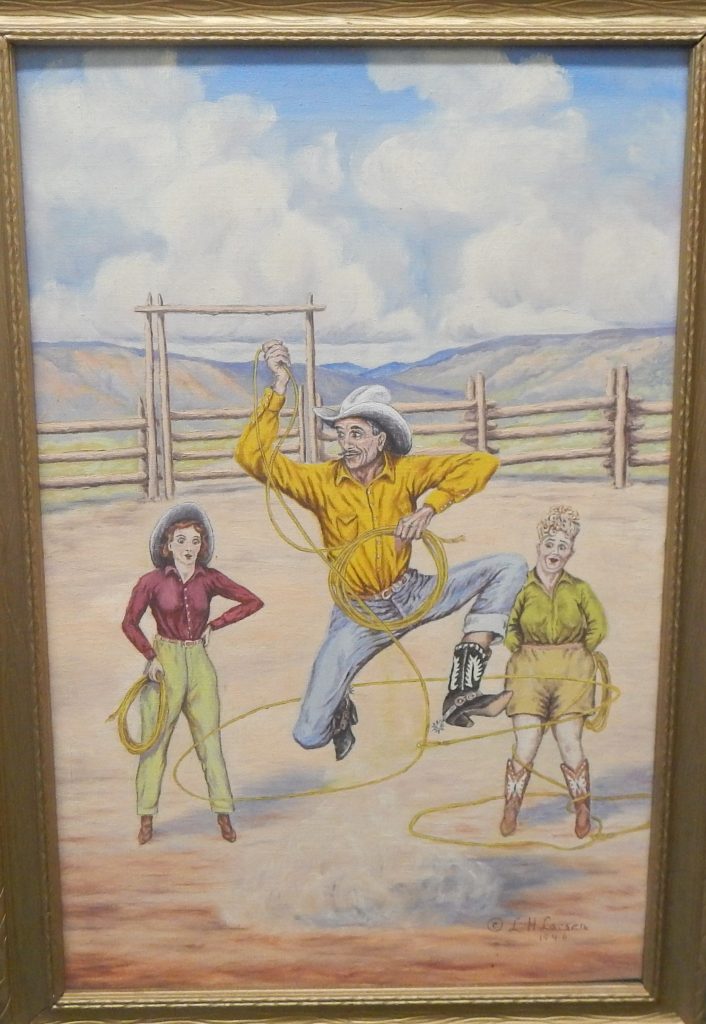 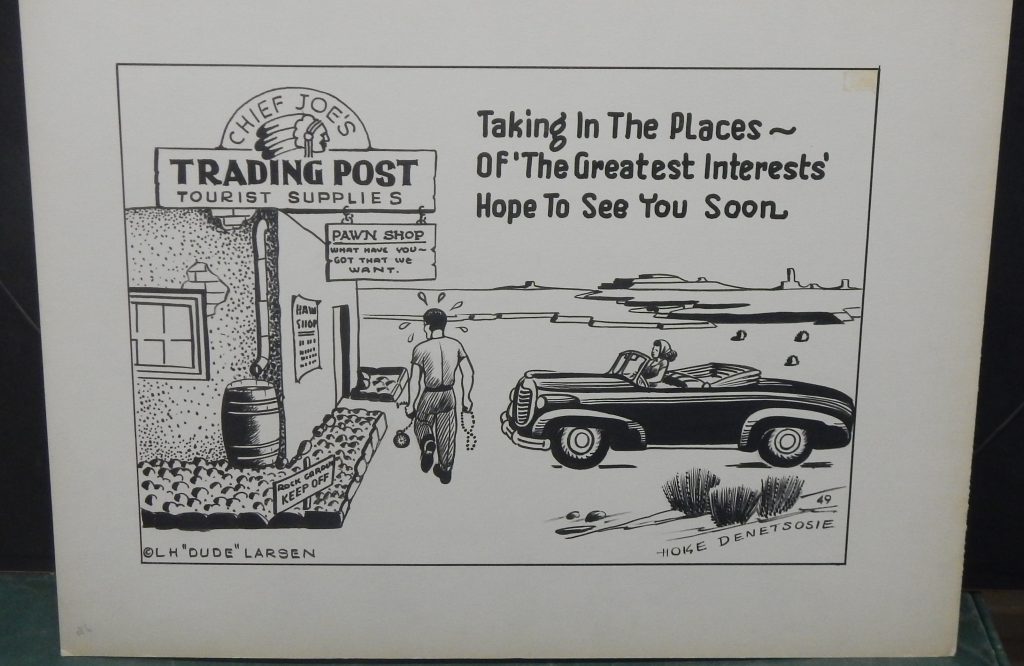 Larsen ran for senator in 1949. He served one term, but politics rarely appeared in his art; he was a sentimentalist and a humorist. The latter of the two can be seen in many of Larsen’s printed cards showcasing the silly and risqué culture he knew so well.

As a liquidator, the ability to find the right audience for items with risqué chauvinistic references can be challenging, but there is always an audience for postcards as they are tiny portals into the past.

The Roundup a western working scene included in the collection, represents a fall round-up the Larsens did with their cousins who homesteaded along Westwater Creek, Utah. Painted in 1940, the canvas features several cowboys finishing a long day’s work and gathering for an open fire meal. Complete with a chuck wagon in the background, this early 1900s scene represents the work and drive of cattle to the Colorado, Denver, and Kansas markets. 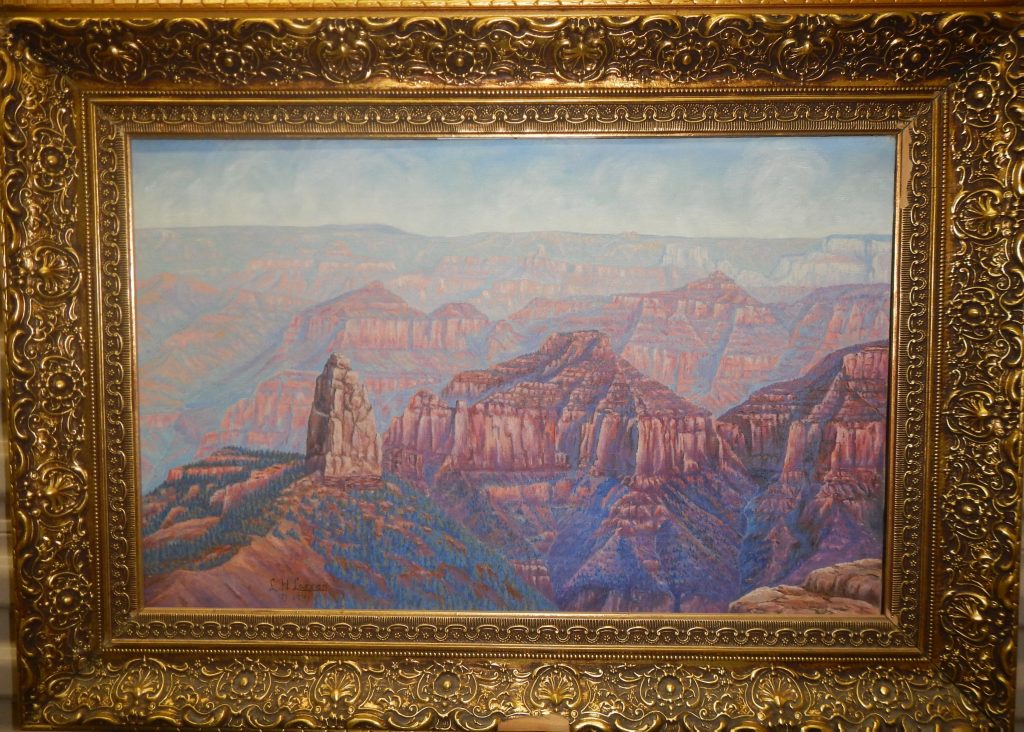 As we prepare these amazing and rare pieces of art for final auction, we feel privileged to have stumbled upon this estate and learn so much about this little part of American culture and history. The sale of these paintings will also include paintings by Dot Larsen. One of her paintings, The Scout, painted in 1946, illustrates the early history of southeastern Utah. The Scout gained popularity when it was featured in a 1998 documentary highlighting the Red Rock desert. It should be noted the postcard No.45 was mistakenly credited to Dude Larsen. 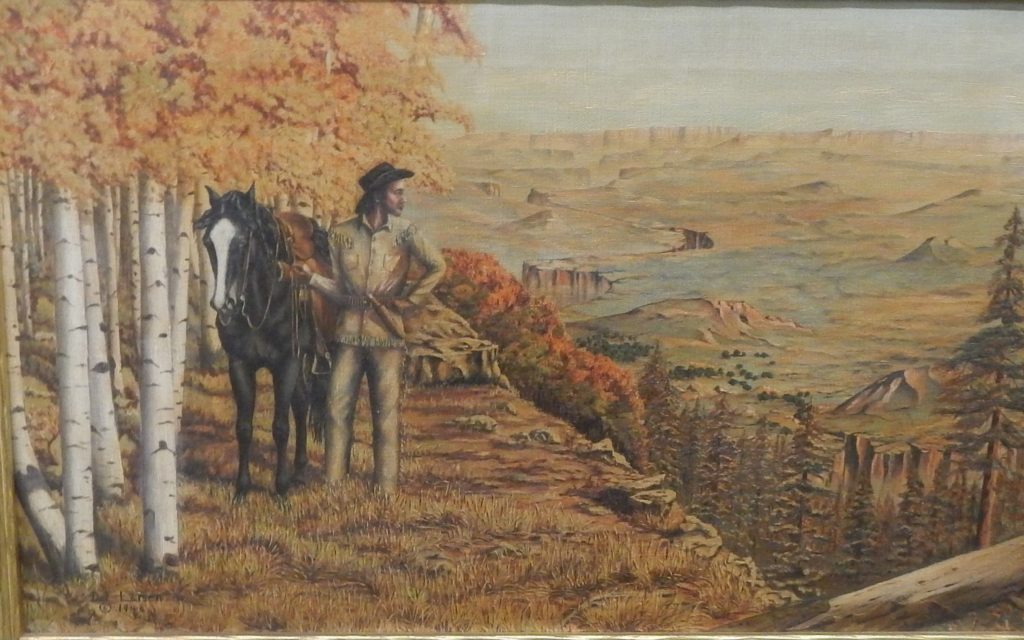 The liquidation industry has many levels and processes with varied degrees of involvement. With most estates the process is a straightforward sale with no personal involvement. Each time an estate like this comes along, it should be treated as historical reference and curated as such. We are proud to represent L. H. “Dude” Larsen’s artwork and have enjoyed the adventure of revealing this artist’s original work. We hope you will have an opportunity to view the Larsen’s art and enjoy a piece of history.

An auction of these paintings, storyboards and cards will be going up for sale October 25, 2020, on EstateSales.org, and more information can be found on Levy Estate Services’ website. Levy Estate Services is poised to bring a selection of the Dude’s little-known hobby to light. Titled, “The Cowboy Artist,” the sale will feature seven of Larsen’s paintings, eight storyboards – one by Larsen and the rest by Hoke Denetsosie. Additionally, there are multiple lots of over 1500 cards. Contact Levy Estate Services by phone at (918) 286-9698 for more information about their professional estate liquidation services, including inventory and valuation services, or to schedule a consultation. 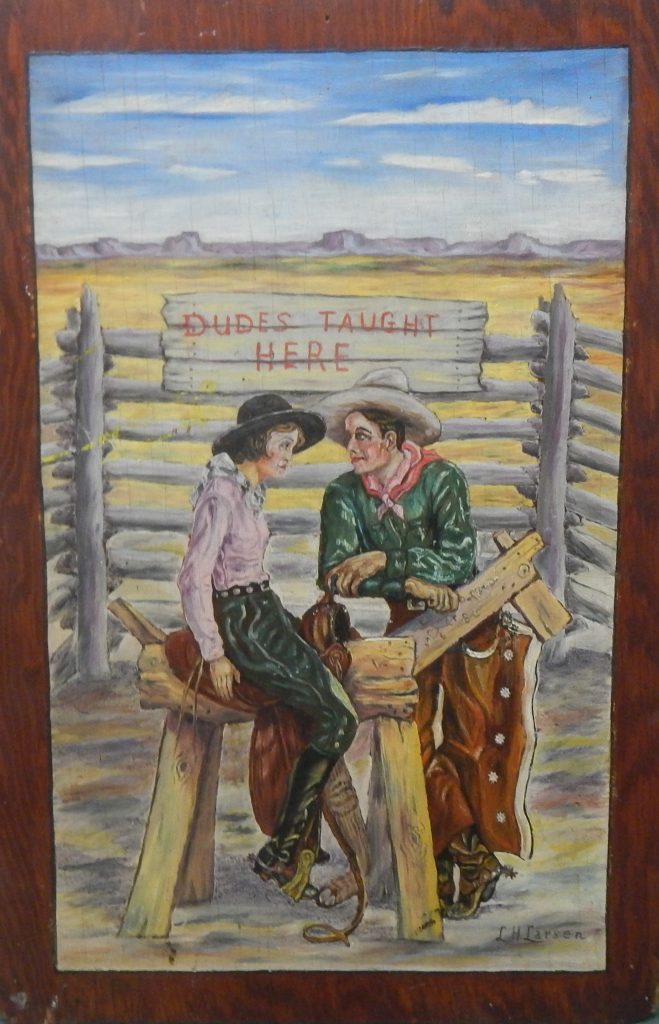 Dude and Dot Larsen must have been interesting people to know!

Thanks for this! He is my favorite.