A successful way to make new friends in a foreign country is to attend a sporting event. It does not matter what kind of sport. Our cousins in Europe are much like us, they cheer their home team, and as often as we do, they boo the opponent.

Most Europeans are enamored with sports that Americans have no experience with. To name a few, there are ground or team games like cricket, handball, and rugby. There are lawn games (most of which are unique to specific countries) like “ruzzola” in Italy, “hammerschlagen” in Germany, and “myrarbolti” in Iceland. And, there are water sports such as polo, body-surfing, and river jousting.

As a traveler, not a tourist (a tourist is someone who follows a guide) you may find yourself on a country road and without warning you come upon dozens of cars parked along the roadside and hundreds of people gathered at a make-shift stadium or an arena. There is a good chance that these two circumstances will find you at a sporting event. The two most frequent gatherings in Europe are bocce games and river jousting. 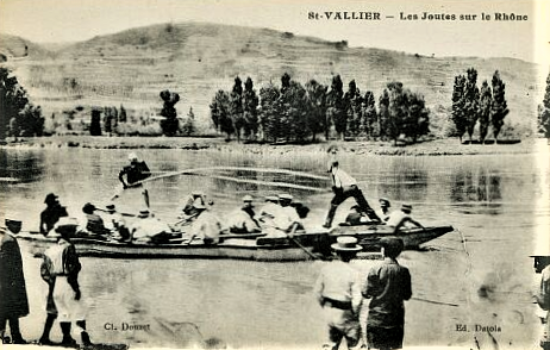 The caption on the card reads: St.-Vallier – The Jousts on the Rhöne.

Today my French is good enough to order a meal in a restaurant or buy a ticket at a train station, so it is difficult to translate the websites devoted to River Jousting, but there is still a lot of history to learn.

The first recorded history of river jousting is found in Egypt – 4,400 years ago, when the Egyptians and Romans would battle from small boats on the Nile. By the sixth century, the concept made its way across the Mediterranean to Venice and by 850 AD, teams in Germany, Denmark and other Viking countries were jousting.

The first organized teams in France were formed in 1507 to honor and entertain King Henry II and Catherine de Medici. Today river jousting is played mainly in Europe and mostly in France during a five month (May to September) season. Currently there are approximately 100 teams from six countries who participate in annual competitions.

The concept of river jousting is quite simple. Teams (sometimes two-man, sometimes as many as seven) arrange themselves in flat-bottom boats, not unlike the Venetian gondola. The rowers propel the craft toward their opponents with the intent

of passing on the right. From a platform called the block, affixed to the stern, the jouster, protected with a shield that is the basic target, is armed with a wooden lance that is 10½ feet long. He braces himself with foot-blocks and aims the lance at the target affixed to the left-forearm of his equal in the other boat. An old French postage stamp provides a perfect illustration.

Old photographs show combatants dressed in trousers, shirts, and up until recently, hats. Swim wear was simply inappropriate. The mind-set has always been, “no member of our team would ever need to swin to shore.” Getting wet was simply not part of the game-plan. 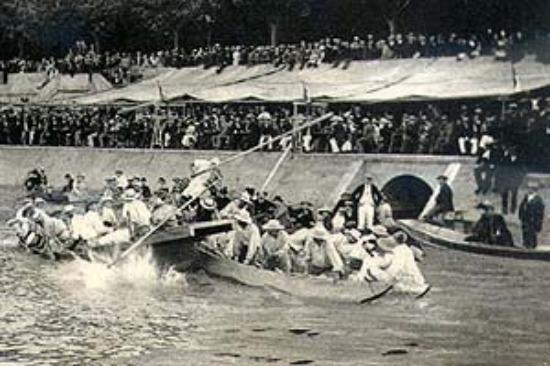 One day in the summer of 2003, this happened to me. Our plane landed in Barcelona and once the papers were signed, we headed north in a rental car for the French city of Carcassonne. I know you won’t believe me but we were going there for crêpes. We had a delightful drive over the Pyrenees and when the road flattened in the south of France, just a bit north of the Principality of Andorra (the French microstate that harbors itself in the mountains along the border of France and Spain) our journey came to a halt because of a road blocked by hundreds of people watching a river joust on the Ariege River.

I never learned which teams were involved, but I experienced what could be described as immediate fascination. It was one of the many highlights of that trip and being an obsessive postcard collector, I decided to add “River Jousting” as a new topic to collect.

Shopping on eBay is a good way to start any new topic and the first card I found was the one you see here. A bid was placed, and I won the bid. I wanted this card for two reasons: primarily because of the topic, but also because Saint Vallier is a place I have visited. Well not really – we drove through there once. 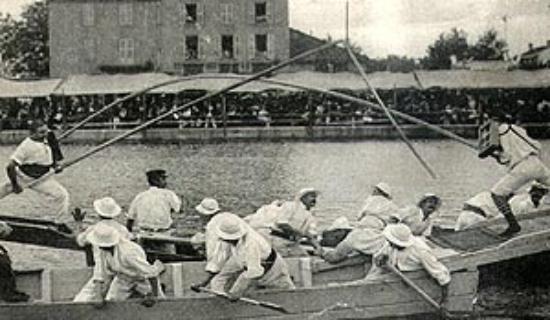 Obviously, the spectator groups are quite large and totally devoted to the sport. Teams contesting the “Joutes Nautiques” championship cups are generations old. Men (and lately, some women too) of different generations participate on the same teams. And they are proud to say that river jousting is a very democratic sport. The most amazing aspect of river jousting is that each member of the team has an equal opportunity to be a jouster, rower, captain, and judge.

The objective is to knock the opponent into the water??