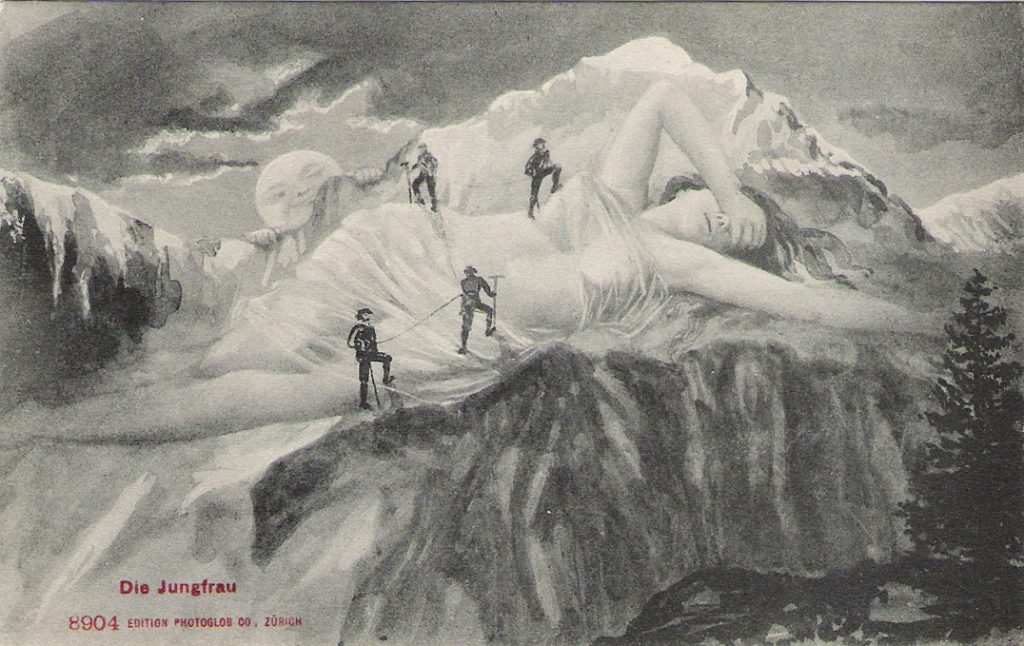 A friend recently mailed me a card and it came to mind that the image has appeared in many editions over the years. Above, this circa 1906 edition from Photoglob Company (Zurich, Switzerland) is most likely the first and certainly the most common. William Ouellette included it in his 1975 book, Fantasy Postcards where he described it as follows:

Man, with his instinct for creating metaphors, has always enjoyed finding human and animal images in nature: a bull in the stars, a face in a cloud, and in this instance, a beautiful young woman on a mountain. One cannot know for certain how long some of the Alps have had their names, but surely the Jungfrau has been a virgin for centuries and the subject of many tales. An anonymous Swiss artist with knowledge of his folklore and a keen imagination has invented this remarkable image which poses many intersting questions … The feeling of night with its heavy sky, the sense of sleep, and the abandon of dreams is pervasive. The moon spies on the scene and sheds light, but not enough to answer our questions. Is this image the virgin’s dream, the mountain climbers’ fantasy, or a dream-fantasy of our own? Should we be voyeurs, like the moon, or dream our own dream?

The theme was successful and other publishers soon presented their imitations.

Below is a color rendition nearly the same as the original. 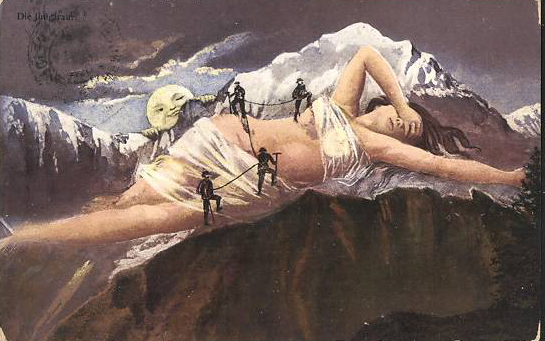 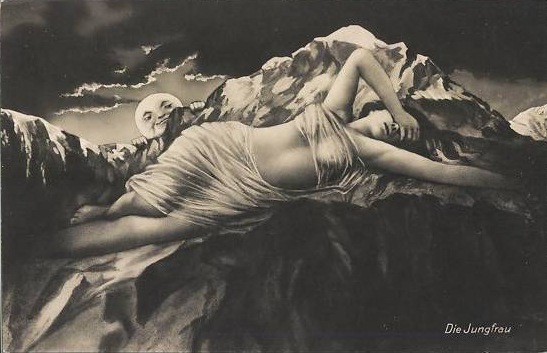 Gray-tone version
(without the mountain climbers) 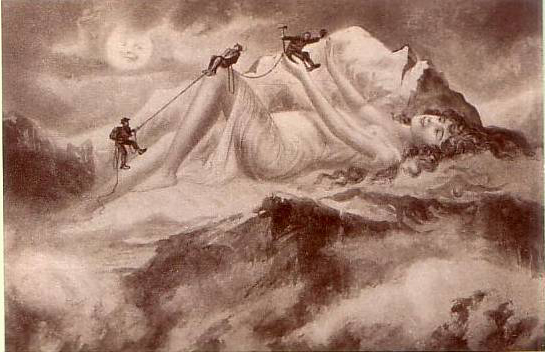 Sepia edition
(with only three climbers)

The artist whose work appears on the first card is unknown, but over the years the mountain, which is in the Berne Highlands, has been painted by three very noteworthy artists: John Martin (1837), F. Madox Brown (1842) and most recently by Ferdinand Hodler.

This map of Switzerland, courtesy of Wikipedia.com,
shows the approximate location of the Alp Jungfrau.

The most familiar use of the word,  jungfrau outside of German, references an Alp of more than 13 thousand feet located north of the Swiss capital, Bern. Even the most jaded traveler is amazed at the beauty of this mountain, especially in Spring as the snow melts from the upper reaches. Waterfalls abound and pilgrims from around the world flock to Bern for Easter festivities.

Climbing of the Jungfrau is a popular sport, but became so only after 1811. Before hand it was common lore that the summit was unattainable. The Meyer brothers from the village of Aarau (in northern Switzerland) were first to reach the summit on August 3, 1811. The effort expended by the Meyers were compounded by glaciers and the need to cross high mountain passes, but in 1865 a more direct route was discovered on the north side of the mountain.

Among the serious mountain climbers today, the Jungfrau is a lesser challenge, but still a required climb before certain recognitions can be granted.

The Jungfrau Railroad, a rack-style operation was constructed between 1896 and 1921 brought even more visitors to the area and because of its popularity the Jungfrau was declared a World Heritage site in 2001.

When a postcard is included in a book, it creates a strange circumstance among collectors, and Ouellette’s inclusion of this card in his book was no different. Once, these Jungfrau cards were highly collectable, but today they are nearly forgotten. Most dealers will have a few and any collector will be able to find them easily.

This article makes me wonder who, if anyone, was the model for the young woman depicted.