In the television program M*A*S*H (season 8 – episode 4, aired October 8, 1979) entitled Goodbye, Radar, the camp’s generator fails while Col. Sherman Potter and his surgical crew are busy in the operating room. In the background Arthur Godfrey can be heard singing along to a tune he is playing on his ukulele.

As the lights go out, Col. Potter is making a comment about the advances of technology – being able to hear a radio program broadcast from America while in Korea. Without missing a beat B. J. Hunnicutt laments the fact that no one from Mill Valley (his hometown in California) ever won the Arthur Godfrey Freckle Counting Contest which was held every Tuesday night at 9 p.m. as Arthur Godfrey’s Talent Scouts was broadcast on CBS.

Arthur Godfrey was still active as a television and radio entertainer in 1979, but his radio show referenced in the M*A*S*H program had ended in 1972. [Editor’s note:  It is possible to experience the Talent Scouts program at the Museum of Television & Radio in Manhattan; although it has been renamed the Paley Center for Media at 25 W. 52nd Street, New York City. It is a remarkable place, but a visit is very time consuming since the entire museum is dedicated to audio-visual artifacts with a collection of over 50,000 TV and radio shows. Pick your favorite from the library then make yourself comfortable and watch your selection at a video console.] 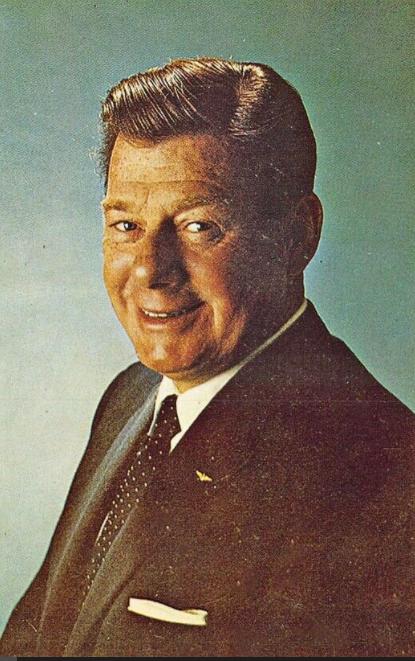 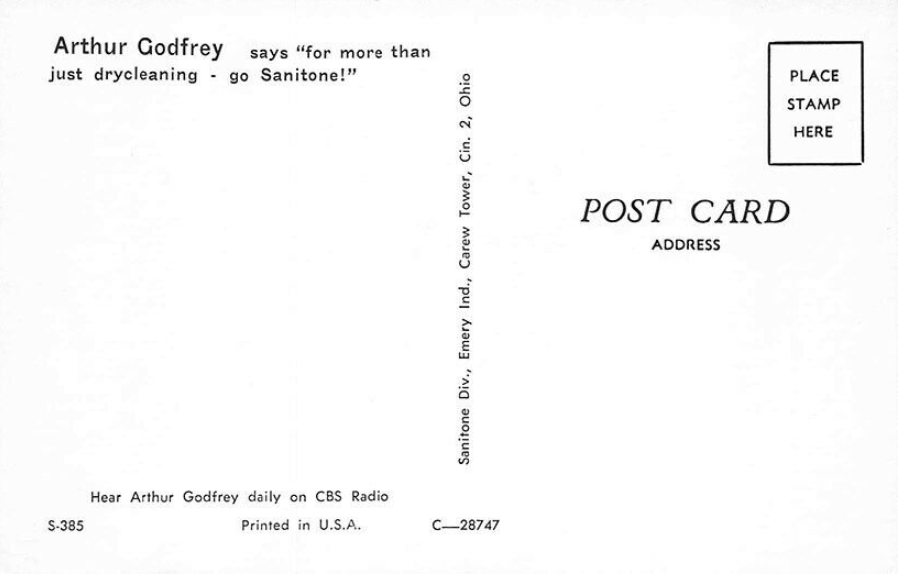 Arthur Morton Godfrey was much more than an entertainer. Born in 1903, his childhood was normal but by his mid-teen years somewhat troublesome. His mother, Kathryn was a New York socialite; his father an Englishman with strong ties to late 19th century transportation concerns. The invention of the automobile literally ruined the Godfrey family’s finances. Arthur’s father did his best to care for the family by working as a newspaper sports reporter, but his success was limited. Mrs. Godfrey supplemented the family by playing the piano in silent-movie theaters. 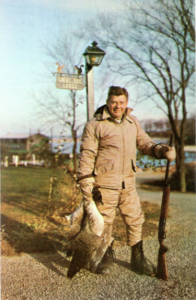 Hasbrouck Heights, New Jersey was their destination in 1915 whe 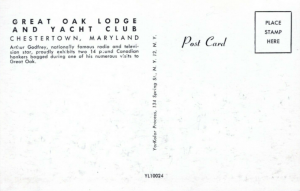 n the family was forced to leave New York for financial reasons. Arthur attended the local high school but left at age 15 to ease the financial burden. He worked first as a civilian typist at Camp Merritt, New Jersey, and later mined coal, cooked in roadside diners and sold cemetery plots. At 17 (he lied about his age) he enlisted in the Navy. Arthur was the oldest of five children – he had two brothers, Robert and Charles, and two sisters, Katherine and Dorothy.

Arthur acquired his first radio job in October 1929 at WFBR (Baltimore). He and CBS through mutual agreement decided to end his association with the network in April 1972. That ended his 42 year career during which he had as many rough spots as he had smooth sailings.

Arthur Godfrey enjoyed unparalleled popularity; his association with President Eisenhower was noteworthy. He was well known as a pilot (his favorite means of transportation was is own Douglas DC-3). Godfrey was also an active civil rights advocate; his public feud with Georgia governor Eugene Talmadge was the stuff legends are made of.

One common expression among postcard collectors in effect says, “… there’s a postcard for everything.” We would like this to be true, but in the case of Arthur Godfrey there are postcards,

but there are very few. When I last counted (about six seconds ago) there are five; four of them are seen here. I know there is another, showing Godfrey sitting at his broadcast desk smoking (allegedly) a Chesterfield cigarette.

This modern card was once available at the gift shop of the Paley Center. It shows Arthur Godfrey as a man with a temper. There are many accounts of behind-the-scenes antics, but I’ll trust you to search them out depending on your interest.

Godfrey was always a showman, but he was also an ad-man. He frequently allowed his name to be used in advertising for Chesterfield cigarettes, laundry detergent, toothpaste, and even bagels. 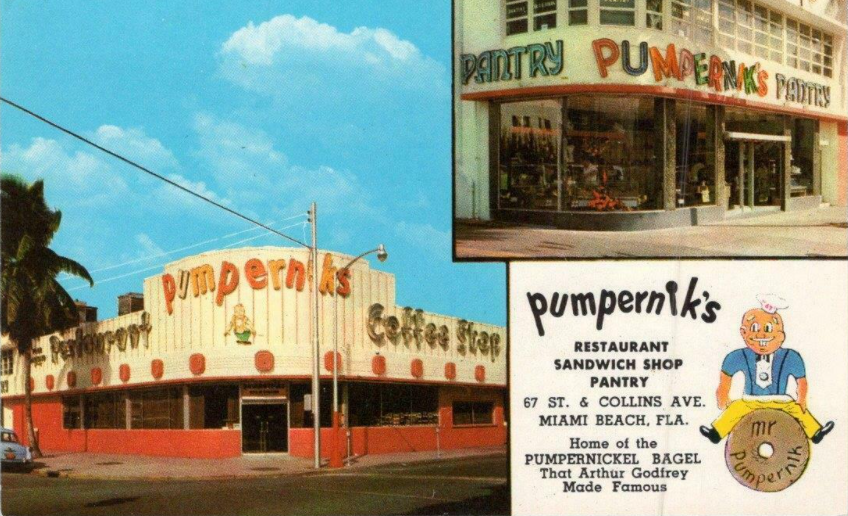 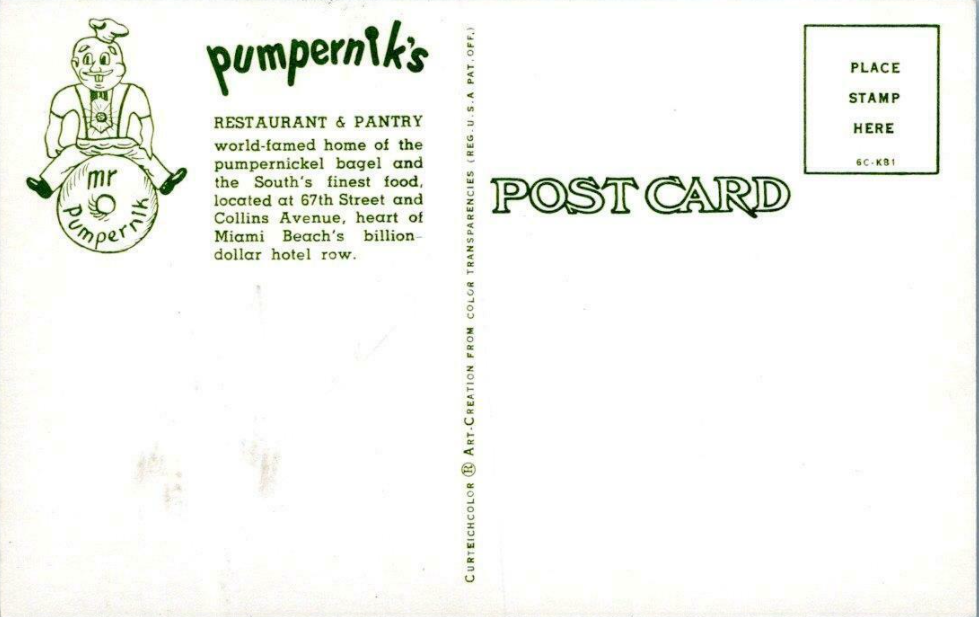 As I recall, Godfrey was also an anti Semite. I believe the hotel he owned in Florida had a sign saying “No Jews or dogs” My mother hated him.

The sign predated Godfrey’s ownership of the hotel, and he allowed members of his cast and band to stay there. However, many Miami-area residents who remember him agree with your mother. Hard to imagine someone who liked bagels could totally hate Jews, but this article expands on the controversy: https://www.miamiherald.com/news/local/community/miami-dade/miami-beach/article1977826.html

Hogwash. Some people were jealous of his success, Arthur Godfrey is still being slandered, even though he’s been dead since 1983.

Thanks for the bio!