a look at some odd cards

Serious students of the calendar could amuse most of us with a long list of events, the facts of which would fall into a bin where the world keeps all its worthless information. However here at Postcard History in 2021 we are going to celebrate that trivia by taking closer looks at some postcards that are just as unusual as fifth Sundays. We hope you enjoy the party.

Postcard collectors who have been at it for a few years will admit to having cards that qualify as space-wasters. Let’s define the term as, a card that you do not remember buying and a card that has no relation to any topic you seriously collect, but it is too good to give away, throw away, or even use as a fire-starter.

Here are three such cards from my collection. They represent places on earth that are hemispheres apart, as well as unrelated by date or topic. Cards whose history is so short it is hardly worth telling. Come along as we dig some of that worthless trivia from the bottom of the bin. 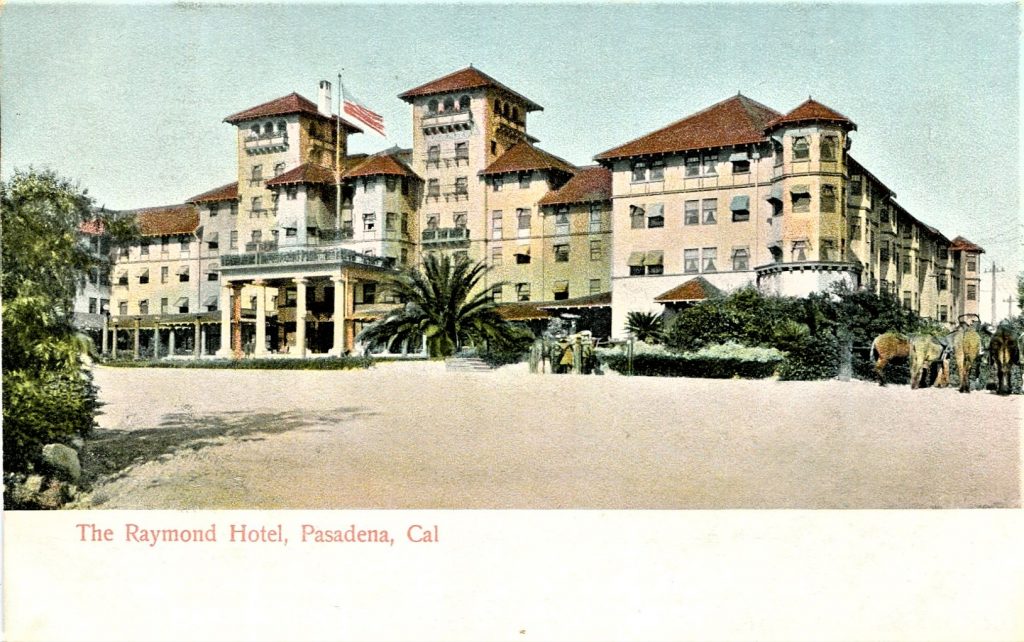 This postcard of the second Raymond Hotel has an undivided back published
circa 1900 by M. Rieder, Los Angeles and Leipzig, stock number 3373

The story of the Raymond Hotel in Pasadena, California, can be told in a few short sentences: They built it. Lots of rich people stayed there in the winter months. It burned down. The rich people were sad. They rebuilt it. The rich people returned. The Depression happened. They demolished the hotel.

It was built in 1886. Rich people stayed for the winters from 1887 to 1894. It only took 40 minutes to burn to the ground in 1895. It took $400,000 to rebuild it. It took five years. No body knows where the rich people spent their winters. The second Raymond Hotel (the one on the postcard) opened in 1901. The rich people came back until the Depression, then they weren’t as rich. Tough times came and someone demolished the hotel in 1934. 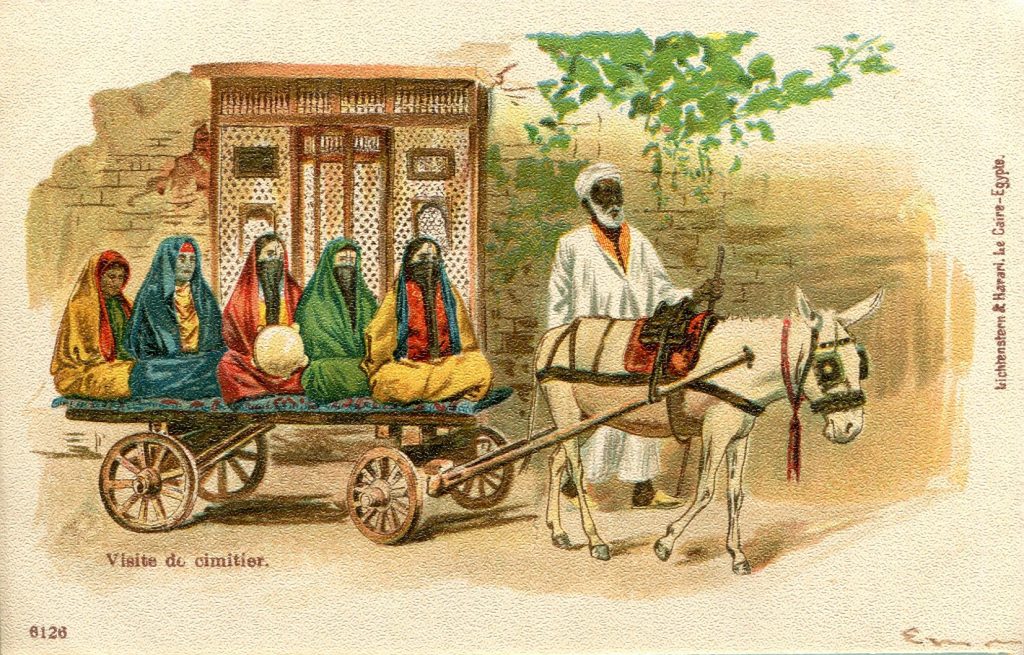 This artistic view shows an assembled team of professional mourners preparing to participate in an Egyptian funeral. Published by the largest of the Cairo postcard manufacturers, Kichtenstern and Harari, it is dated January 1904. Signed in Cairo, by E. M. North.

Careers in moirology developed centuries ago in near-eastern, Mediterranean, Chinese, and other societies. Those who practice this strange profession are paid to lament those who have left the living. Their employment is usually by families too small, uncaring, or unable to present a satisfactory funeral procession. The moirologists are expected to create a drama that suggests that the world will be a much sadder place without the departed.

The first hard evidence of paid mourners comes out of ancient Egypt, where Egyptian mourners set the standard. Among some of their antics were flamboyant screams of grief and acting in grief pageants which included loud wailing, whipping and beating of their exposed breasts, splattering of their bodies with dirt and animal blood and the always popular dishevelment of hair, tearing of clothing and other unsightly displays of apparent and uncontrollable sorrow.

In many ways the profession was among the first to be aligned with the sexes and religion. It was imperative that female moirologists impersonated the death gods, Nephthys and Isis. 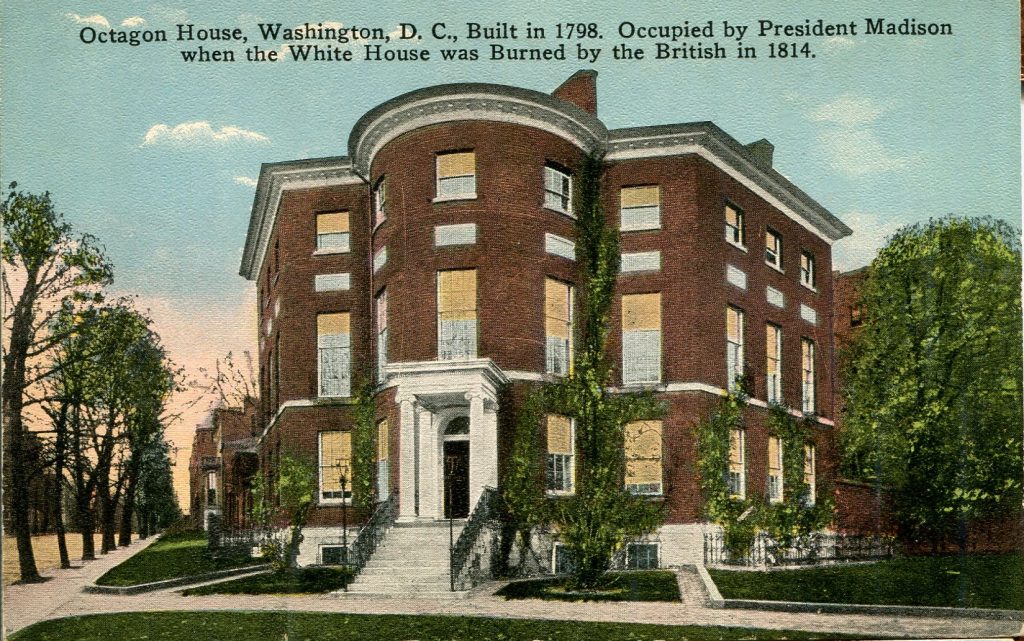 Colonel John Tayloe III, a Virginia plantation owner, politician and social gadfly was probably the richest man in America throughout the first quarter of the 19th century. He was known as a thoroughbred horse breeder, a military officer, and a member of the Virginia House of Delegates.

John was born in 1770, one of nine children. He was sent to England for a proper education, and upon his returned to America in 1790 he found himself to be the sole surviving heir to his father’s massive fortunes. When his father died in 1799 and the estate was distributed the annual income from all properties bordered on $60,000 – $75,000 annually. A 1930s research project at the University of Missouri determined the average annual salary for a skilled craftsman in 1799 was $160 – $200.

Just prior to his passing, John’s father wanted to build a “new and remarkable” home within the confines of America’s Federal District, Washington – he chose the corner of New York Avenue and 18th Street. The Octagon House was the result.

As we know, America fought a second war with the British in 1812. Primarily it was about commercial interests and in truth its causes were so complex that it is the most misunderstood era in American history. The many conflicts of that war were contested in three geographically different theaters: in the Great Lakes, along the Atlantic coast, and in the South around New Orleans. Washington, DC, was a primary target and it was there that the British inflicted the most damage. They managed to set fire to the White House in the evening of August 24, 1814.

You have certainly heard the story of how on that night in history, Dolley Madison insisted on having the portrait of George Washington removed from the State Dining Room. Following Mrs. Madison’s instructions, a White House servant and the White House gardener, broke the frame away from the wall and the canvas was rolled and secured as it is told with, “the flames licking at their heels.”

The portrait was put in the care of two New Yorkers. Since the Madisons could no longer live at the White House. They moved, at the invitation of John Tayloe, to the rather remarkable Octagon House.

Many historical footnotes romance the lavish parties that Dolley Madison hosted. I wonder if she hosted an event at which John and Anne Tayloe were the guests-of-honor?

Hope you enjoyed this foray into postcard trivia, I’ll be back on the next Fifth Sunday.

Ray Hahn is a retired educator, but he has never stopped teaching. His decades of researching, writing and editing a newsletter for the South Jersey Postcard Club has been a world-class education in trivia. In addition to postcard collecting, Ray’s other interests include history, genealogy, and touring the world with his wife Marie. Ray often advises his readers to "Join me as we explore the world one postcard at a time." Ray and Marie live in New Jersey.
PrevPreviousOn the Line: The Canada-U.S. Boundary in Postcards
Next2021 Know-it-All Quiz WinnersNext
6 Comments
Oldest
Newest Most Voted
Inline Feedbacks
View all comments
Dorothy Wincey

Thanks so much for sharing all the tidbits and oddities…I learn so much every time I get your email. You have made the pandemic lockdown a little more interesting!

Thanks, I like this and look forward to the next 5th Sunday.
I never thought of using postcards as fire-starter before. 😉

I remember being introduced to the concept of professional mourners through an episode of the ’70’s sitcom “The Jeffersons”. I wonder how John Tayloe is related to Nellie Tayloe Ross, the woman who governed Wyoming from 1925 to ’27 and later served as director of the U.S. Mint.

I never knew that they had paid mourners. I learn something every week on Postcard History.

Here’s a campaign card (alas, not a postcard, but still interesting) of Nellie Tayloe Ross. 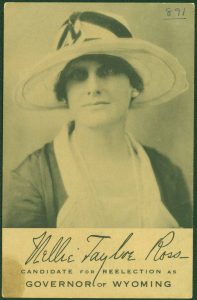