The Canada-U.S. Boundary in Postcards

In the early years of the twentieth century, the border between the United States of America and Canada was still, for the most part, only a minor hindrance to movement between the two countries. In those days, people crossed the frontier regularly, both as visitors and in search of employment, homes, and farms. Because that same period was also the “Golden Age” of the postcard, it is not surprising that “border” themes are found on old postcards.

To illustrate this, we can begin with one of the best-known sets of postcards featuring U.S.-Canada themes – the “King’s Printer” series of 12 cards promoting immigration. These cards were issued by the Government of Canada, likely in the spring of 1906, using illustrations that had already been appearing on other government promotional materials for several years. 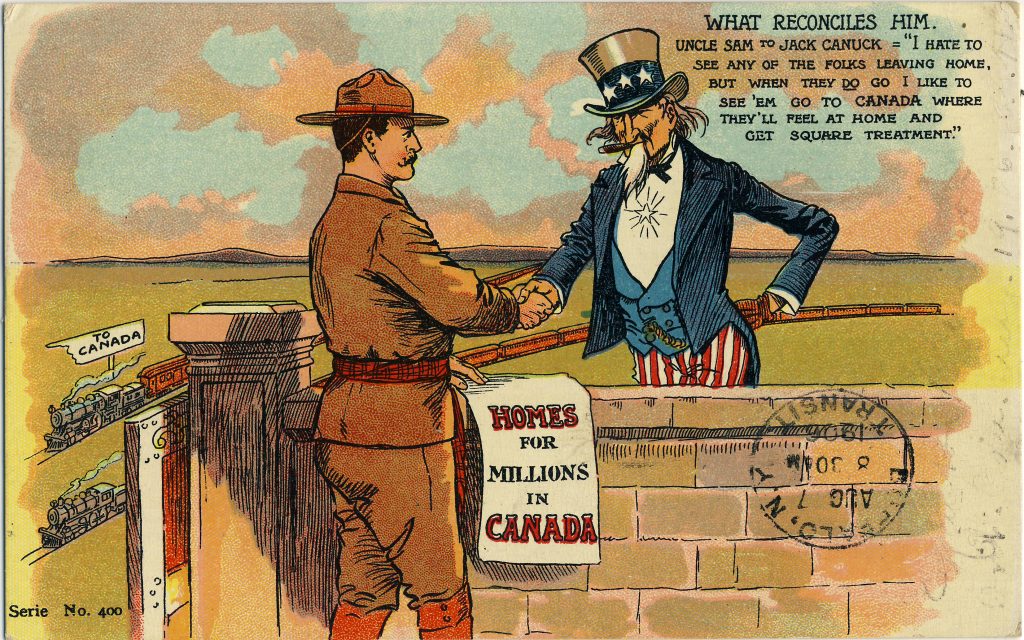 In the first of the two examples that I have selected, Jack Canuck (Canada) and Uncle Sam (U.S.A.) are depicted chatting amicably across a fence (representing the border) as two passenger trains speed northward in the background. The meaning of the trains would not have been lost on anyone receiving the card: they represented the American farm families who, in the early 1900s, were relocating in large numbers from the Midwest to the Canadian provinces of Saskatchewan and Alberta, responding to advertisements (as also seen on the card) promising “Homes for millions in Canada”. While almost forgotten today, this U.S.-to-Canada exodus occasioned much soul-searching south of the border.

The second King’s Printer card takes up the theme: Uncle Sam watches his countrymen “on the march to Western Canada,” observing “Where there is money to be made you’ll find a Yankee.” The old gent seems to be saying – as if to save face – that the settlement of the Canadian Prairie by American emigrants is just another manifestation of their American-ness and that they will still be “Yankees” through and through even when living across the border. 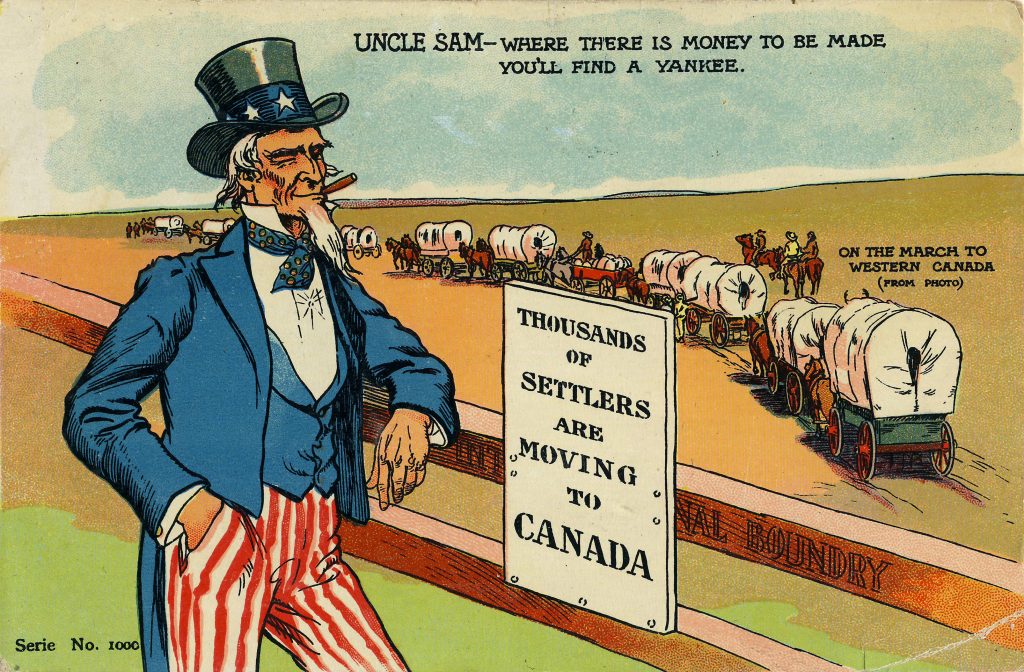 Postcards also tell us about the history of the Canada-U.S. boundary, all the way back to the division of northern North America between “rebels” and “loyalists” in the 1770s. This postcard shows the grave of Barbara Heck (1734-1804), known historically as the “Mother of American Methodism.” When the American Revolution began, Heck and her family relocated from central New York state to the Glens Falls area near the present Quebec border – a region that had remained loyal to King George III. When the revolutionary fervor eventually reached that area, the family fled to safety in Augusta Township, Upper Canada (Ontario), on the north side of the St. Lawrence River. 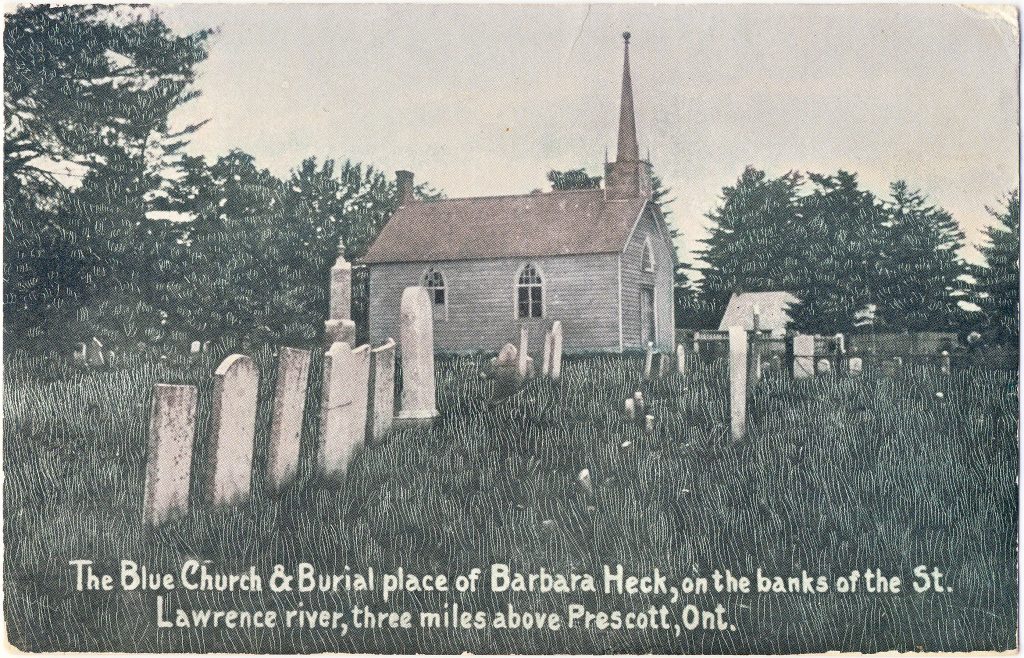 In 1910, the Historical Calendar Advertising Company of New York published a series of postcards commemorating the dates of historical events. This example commemorates the Treaty of 1818, an important milestone in the history of the Canada-U.S. boundary. Signed on October 20 of that year, the Treaty established the 49th parallel as the official frontier all the way from present-day Vancouver to the Northwest Angle of Minnesota. 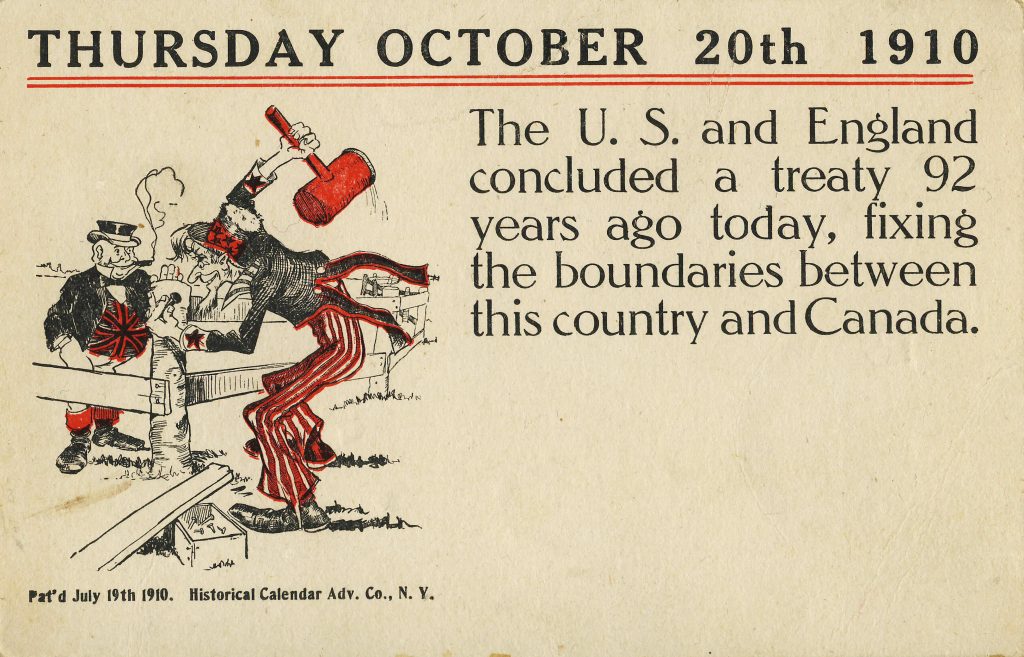 The Treaty of 1818 was followed by the Webster-Ashburton Treaty (Treaty of Washington) of 1842, which decided the highly contentious issue of the boundary between British North America and the U.S. in the area that is now comprised of Maine, New Brunswick, and eastern Quebec. The treaty largely favored the U.S. claim over that of the United Kingdom. This postcard, likely the product of a U.S. publisher, shows a boundary marker. 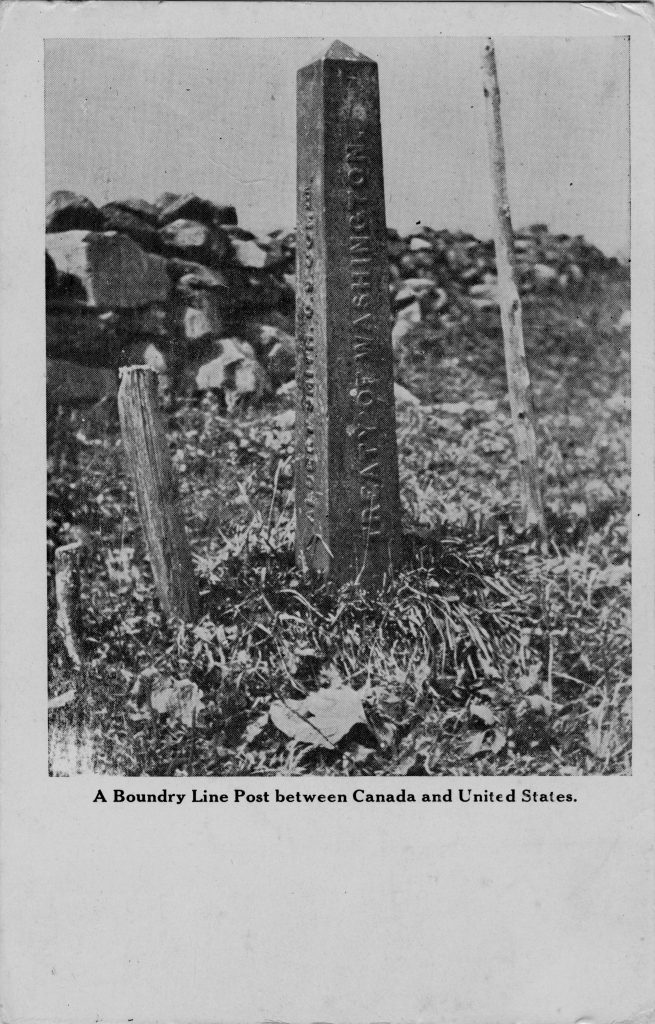 While the Webster-Ashburton Treaty disappointed the territorial ambitions of many New Brunswickers, it did leave picturesque Campobello Island with New Brunswick even though it lies much closer to the U.S. mainland. Campobello did nevertheless serve as a summer home to many Americans, most famously Franklin Delano Roosevelt, whose residence is pictured on an Artvue postcard. A second card shows how close Campobello is to Lubec, Maine. The only bridge to Campobello links it to Lubec, with direct connections to the rest of New Brunswick being by ferry only. This card was published by the Hugh C. Leighton Co. of Portland, Maine – a  prolific American postcard house. 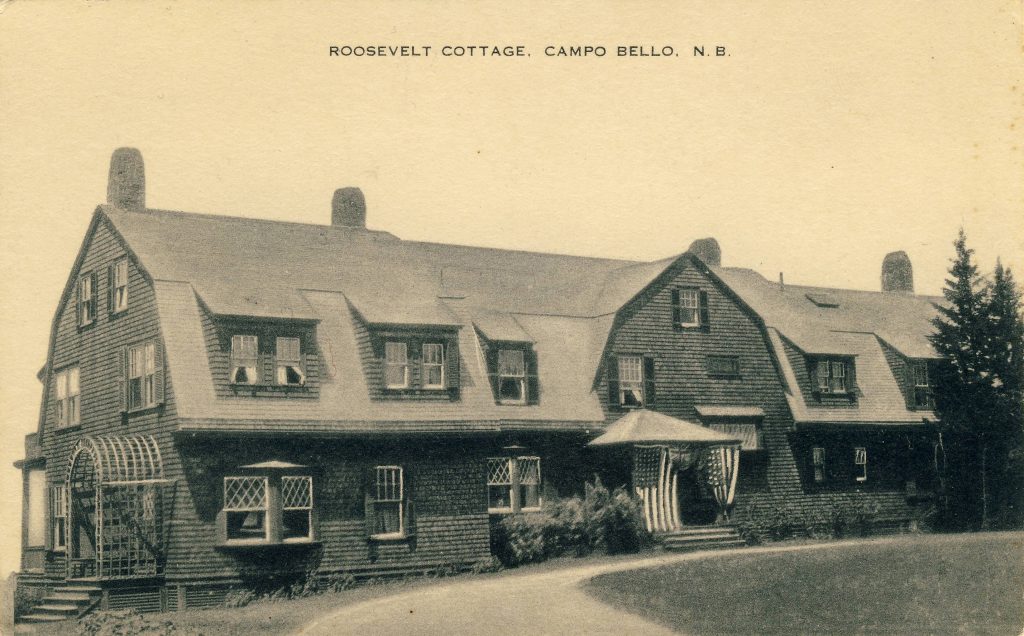 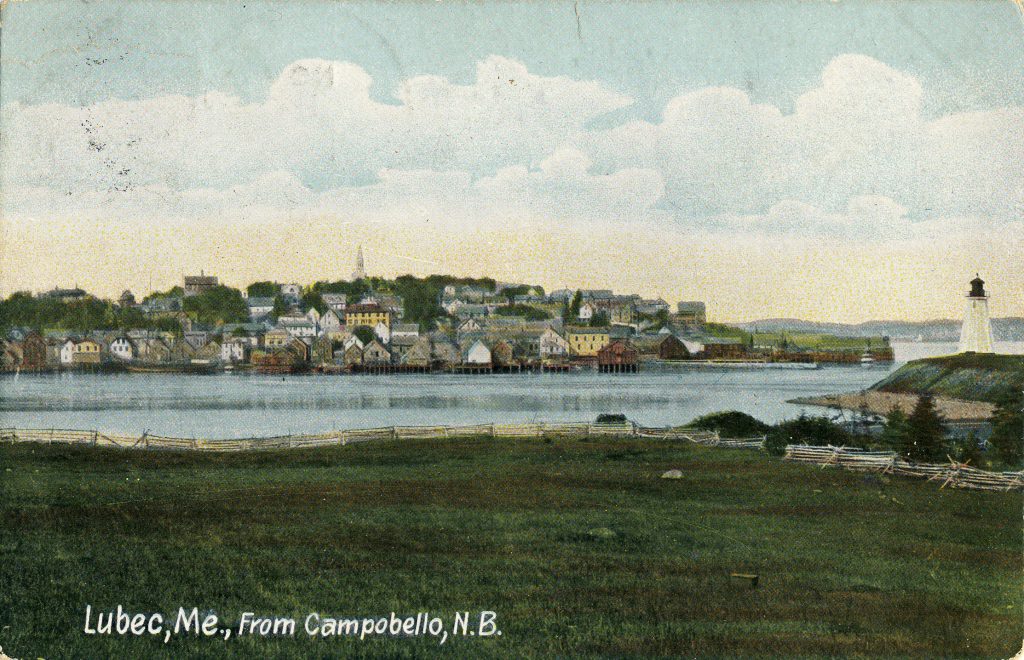 Canada-U.S. relations have had their ups and downs of course, with one especially low point being the Fenian Raids in the aftermath of the U.S. Civil War. On Dominion Day 1902, the monument depicted in this postcard was erected to commemorate the Battle of Eccles’ Hill. On May 25, 1870, the Fenians had begun a planned assault on Montreal from their base in Vermont. Thanks to an English master spy named Thomas Miller Beach, the raid was anticipated and thwarted almost immediately, at Eccles’ Hill in the Quebec county of Missisquoi. 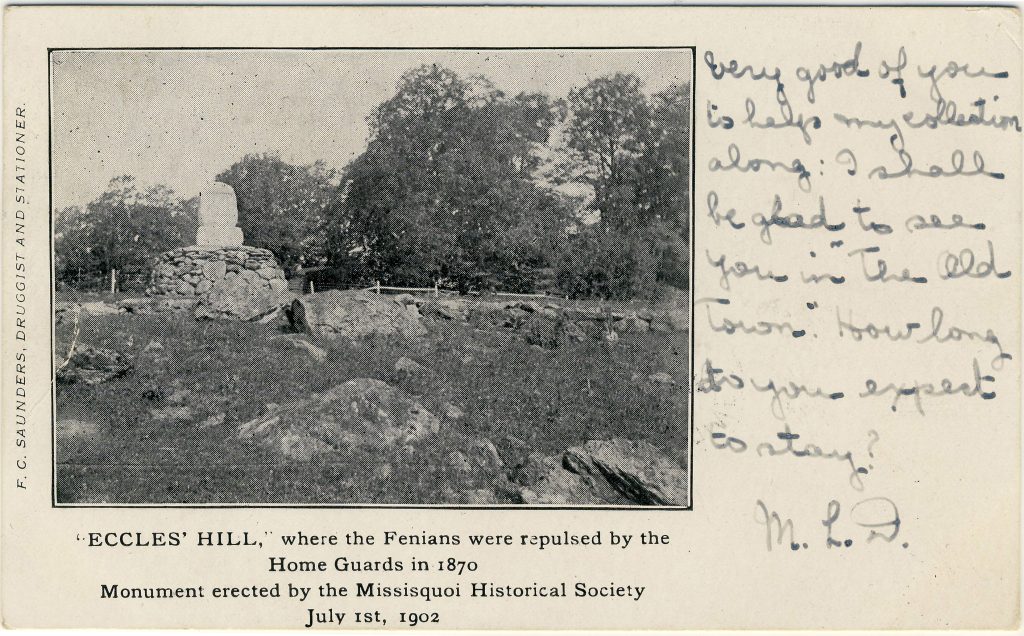 A straight-line border that takes no notice of topography can have quirky results. Around 1871, just a year after Eccles’ Hill (and only a few miles away), a gentleman named Morse built a store straddling the U.S.-Canada border. Half of the store at what became known as “Morse’s Line” (near Franklin, Vermont) lay in Quebec and half in the U.S. It even housed twin post offices: one for each country. By the time of the postcard below (about 1908), the Morse’s Line store had been taken over by one Jimmy Hill. Later, during Prohibition, border-straddling buildings such as this one functioned as conduits for liquor from Canada into the U.S. Gradually, as the border “hardened,” the little bi-national community at Morse’s Line disappeared. Most of the remaining structures, including the Hill store, were demolished by the Government of Canada in 1952. 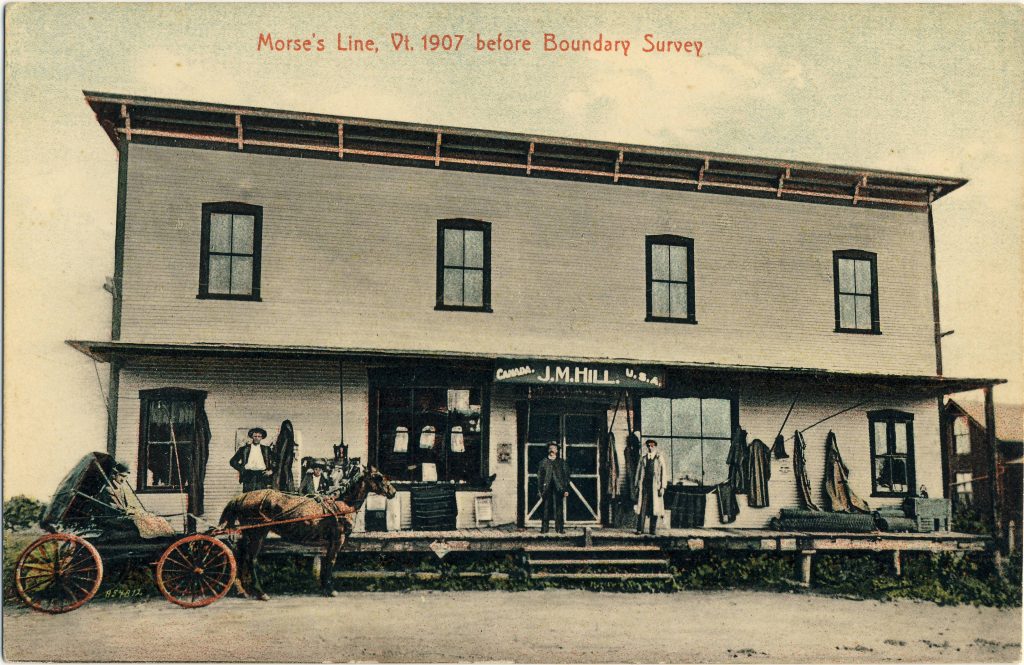 On this card, the boundary even makes an appearance deep underground. Here we see it marked in the Detroit-Windsor Tunnel beneath the midpoint of the Detroit River. The tunnel was opened in 1930 by President Hoover and has remained the sole alternative to the Ambassador Bridge ever since, at least until the massive new Gordie Howe International Bridge is completed in a few years. 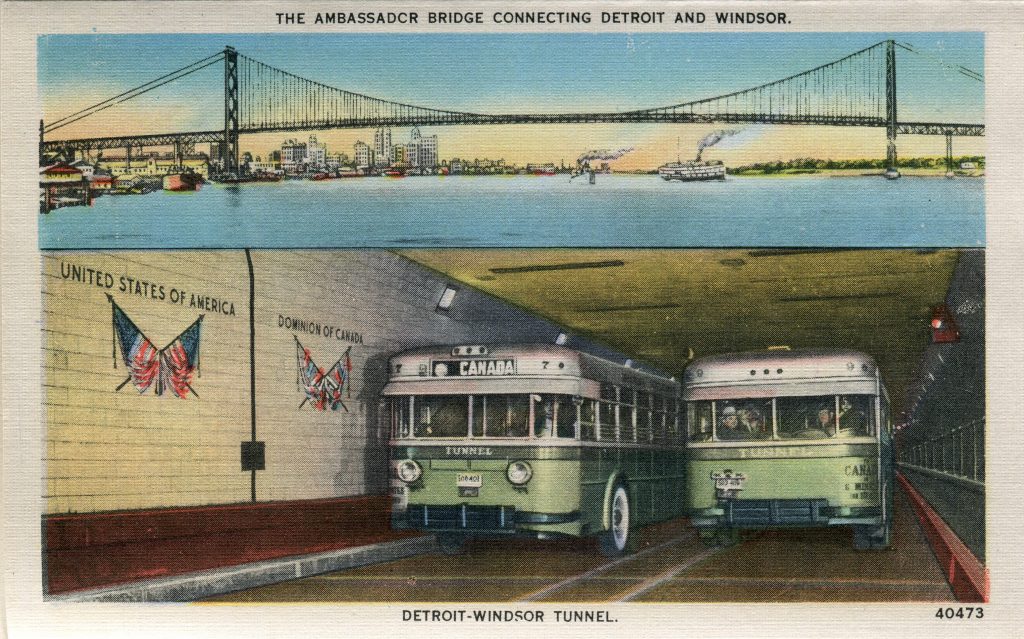 In the early 20th century, Canada rose to new prominence as a place to go to avoid Prohibition. Many postcards of the era refer, usually humorously, to the essential service that Canadian brewers and distillers provided to their neighbors. 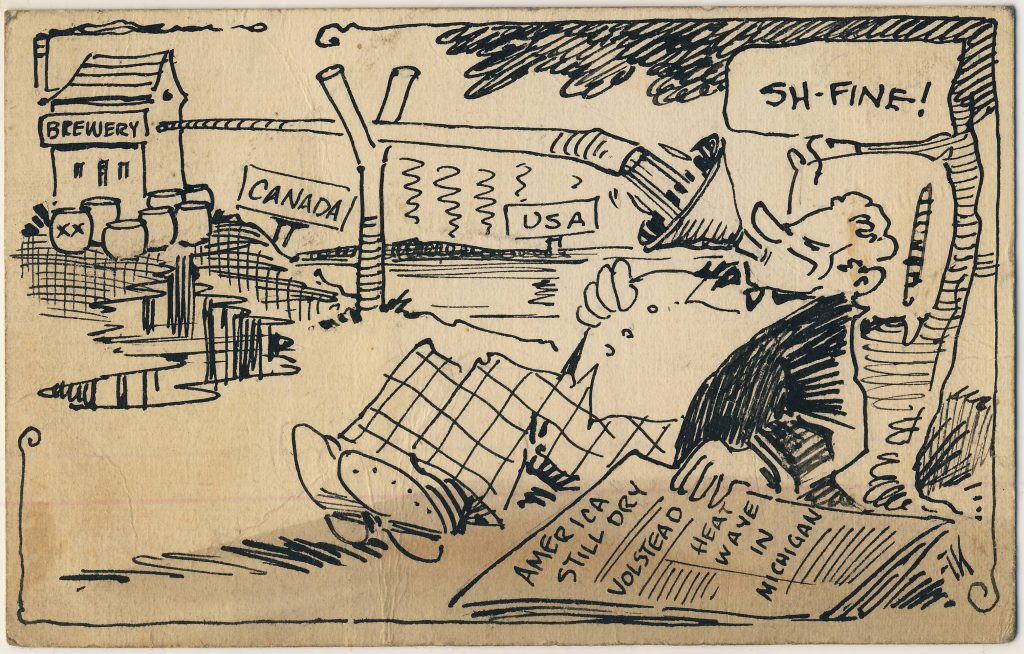 Out west, the convenience of surveyors was one reason for the designation of the 49th parallel as the international frontier by the Treaty of 1818. Before that, the southern boundary of most of Canada’s northwest had notionally been the height of land between the Gulf of Mexico and Hudson’s Bay watersheds. That made sense in principle, but to have attempted to survey a winding and inaccessible border in the early 1800s would have required more resources than either side was willing to commit. To achieve the more realistic straight-line 49th parallel boundary, the 1818 treaty thus required the British to relinquish most of the Red River district (in what is now the Dakotas and Minnesota) and the U.S. to cede a somewhat smaller part of the Milk River watershed in present-day Alberta and Saskatchewan. The Milk River territory remains the only significant parcel of North American land that the U.S. has ever given up, as well as being the only Canadian territory whose waters end up in the Gulf of Mexico.

Saskatchewan’s principal border crossing, which lies a little to the east of the Milk River country, is shown here in a small real photo affixed to a full-sized postcard. If you, like the anonymous photographer is to the left of the boundary line in the image, you are in the village of Portal, North Dakota, while your friend standing in front of the hotel across the street would be in the village of North Portal, Saskatchewan. The train in the photo is identified as the “Soo Flyer,” no doubt a named train on the “Soo Line” that crossed into Saskatchewan at this point. 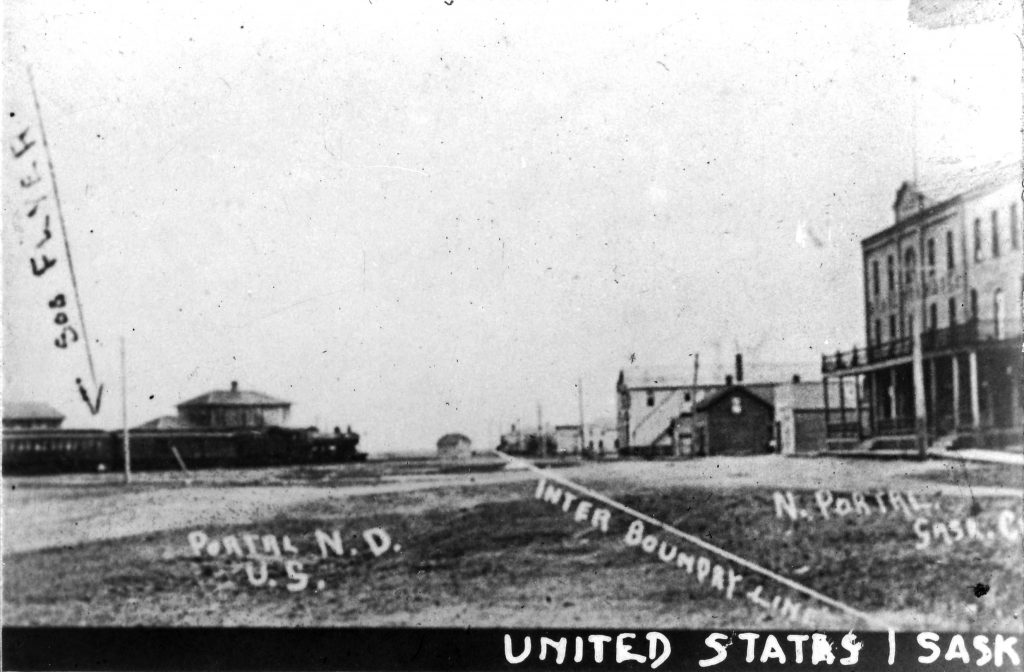 The final image takes us almost as far west as we can go, all the way to the White Pass on the boundary between British Columbia and the Alaskan panhandle. This remote location lies on the route of the White Pass & Yukon Railroad. In the image, a party of around 30 men and women pose on the barren summit, next to a hotel and restaurant that have been built to serve travelers. Recently, the historic railroad provides excursions for Alaska cruise ship tourists. This card was published by Lowman & Hanford Company of Seattle. 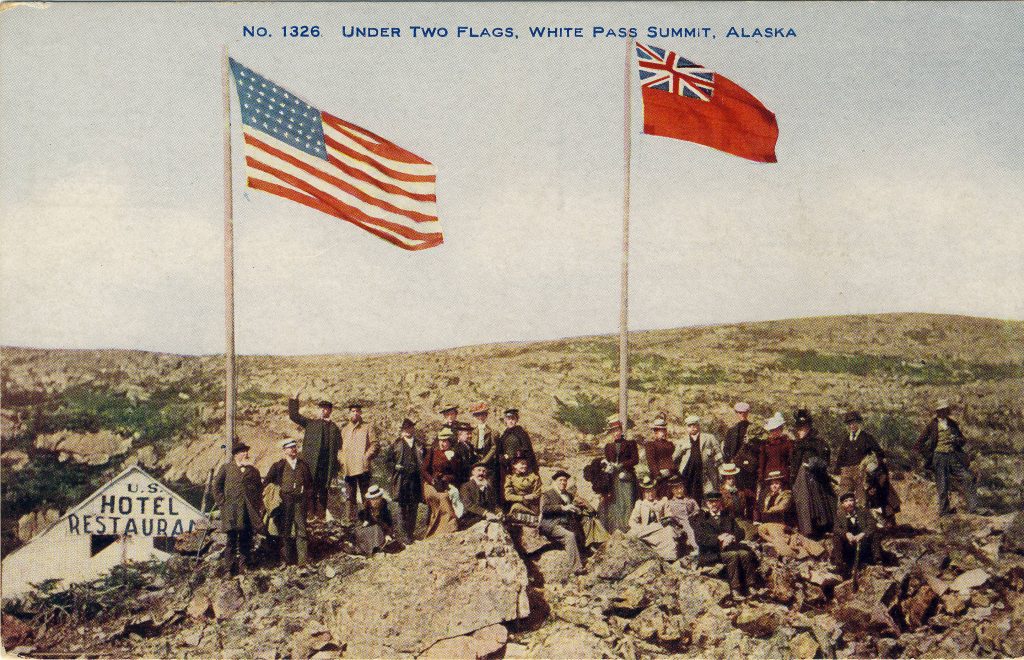 These are just a few of the many postcards that represent the “longest undefended border in the world” in of its political, social, historical and sometimes even humorous aspects.

Andrew Cunningham is a collector specializing in Canadian postcards. A native of Winnipeg, Manitoba, he has served as editor of Card Talk, the magazine of the Toronto Postcard Club, since 2015. He lives in Toronto, Ontario.
PrevPreviousNews Travels Fast…Sharing the Morning News via Postcards
NextA Fifth Sunday Special – a look at some odd cardsNext
8 Comments
Oldest
Newest Most Voted
Inline Feedbacks
View all comments
Shav La Vigne

Thanks for the great article and cards Andrew! My grand mother and grand father both were born in Minnesota in the late 1800’s. After marrying, they moved to Canada for work. While there my dad and all three three of his siblings were born. (dad was born in Edmonton, Alberta). In about 1920, the family moved back to the U.S. and has been here ever since. There was no question that dad was American until he applied for a passport in around 1953. The Stat Department required both his dad and mother to prove that they were U.S. citizens working… Read more »

Yes it is very common to find Canadian postcards written by U.S. “emigrants” in the 1900s and 1910s and then, when researching the writers, to find that they had moved back in the U.S. by the 1920s. People were very mobile in those days.

I sure did enjoy this article also. You started off with two colorful postcards and mentioned that these are from a King’s Printer series of twelve cards. I would love to see all twelve sometime. Believe I have two or three of them, and this will remind me to “look for them” right away. Thanks very much.

Hi Hal, another member of the Toronto Postcard Club has a terrific site on early Canadian postcards and the full series of King’s Printer cards can be seen there. Some of them come up for sale quite frequently while others eluded me for a long time — but I have them all now! https://www.vintagepostcards.ca/collections/Patriotics/KingsPrinter/

Thank you for the very interesting article. I learnt a lot.

Very interesting article. I noticed the word “boundry” on many of the cards — obviously the “boundary” spelling was not yet universal in the early twentieth century. Also noteworthy was how limited the diversity was among those men from different countries who were now Canadians all.

Thanks Andrew, for another fascinating and articulate article and subject. Perhaps many followers will look into your additional writings historic story’s of postcards, through membership in the Toronto Post Card Club and the fine newsletter published quarterly.