Charles Hoffbauer came to the United States from his native France and lost little time in making himself a famous and very wealthy artist. He arrived in New York City on December 21, 1909. Waiting for him was his friend and fellow artist Charles Dana Gibson. With Gibson’s help Hoffbauer was enthusiastically welcomed into the New York art community.

One early commission (The Memorial Military Murals, 1913) came from the Confederate Memorial Association in Richmond, Virginia. Hoffbauer began the project and was well underway when he abruptly quit work and went home to France to do his military duty in the French army. When he returned to Richmond in May 1919, he astonished everyone by removing the work he had completed and started anew. His claim that the war in Europe had changed his perspective and he did not care to glorify war. Those involved in Hoffbauer’s original engagement and many other elements of the population wanted the murals to portray a mythology to obliterate the pain and destruction of our bloodiest conflict.

Hoffbauer’s reengagement brought to fruition murals that came to be known as the Four Seasons of the Confederacy. The four finished panels reflect the army simply as a social machine made of cavalry, artillery, and infantry. When opened to the public in February 1921, they were greeted with high praise, and too, so was the artist. 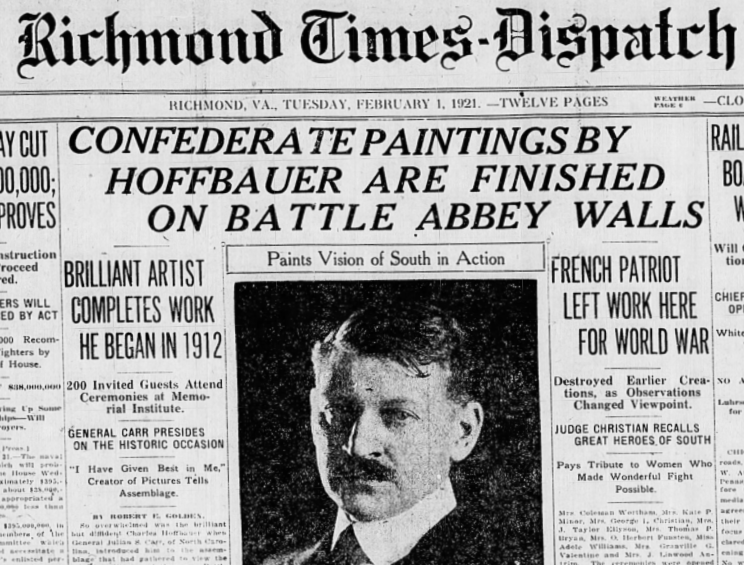 Other commissions came in the years after, but the most significant for postcard collectors, was the invitation he received in July 1940 from the New England Life Insurance Company. Hoffbauer was engaged to paint eight murals at their headquarters in Boston. The murals depict Boston history from 1622 to 1798.

Hoffbauer spent five months in Boston researching the area’s history. As he had done with the Confederate murals, he prepared numerous sketches, painted the murals in Hollywood and shipped them to Boston when each was nearly complete. The company installed them in May 1942 for a convention, and then removed them for four months of on-site finishing by Hoffbauer. 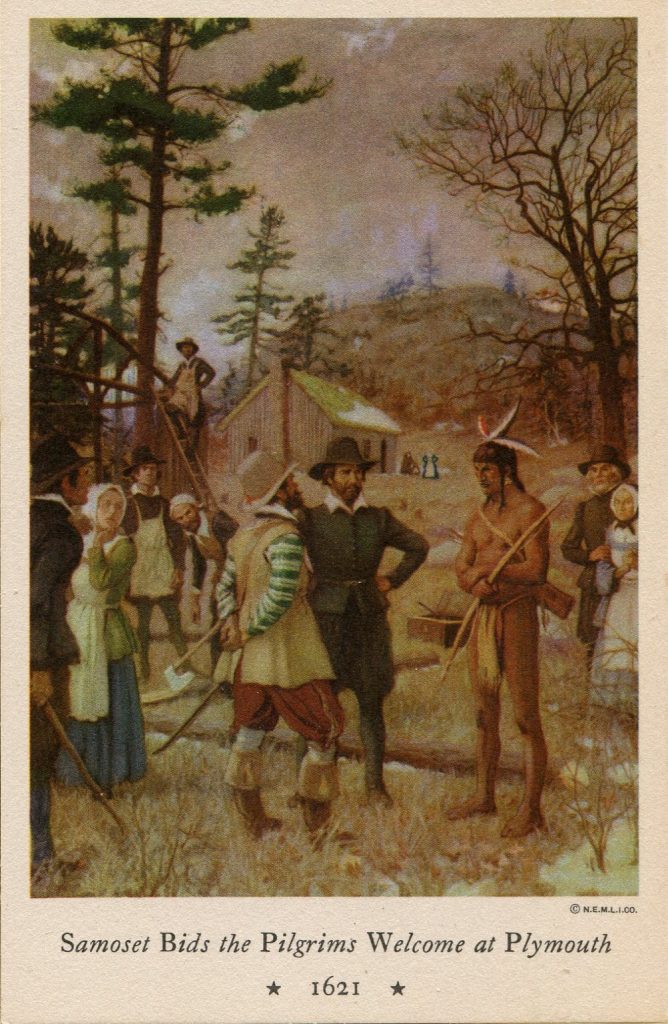 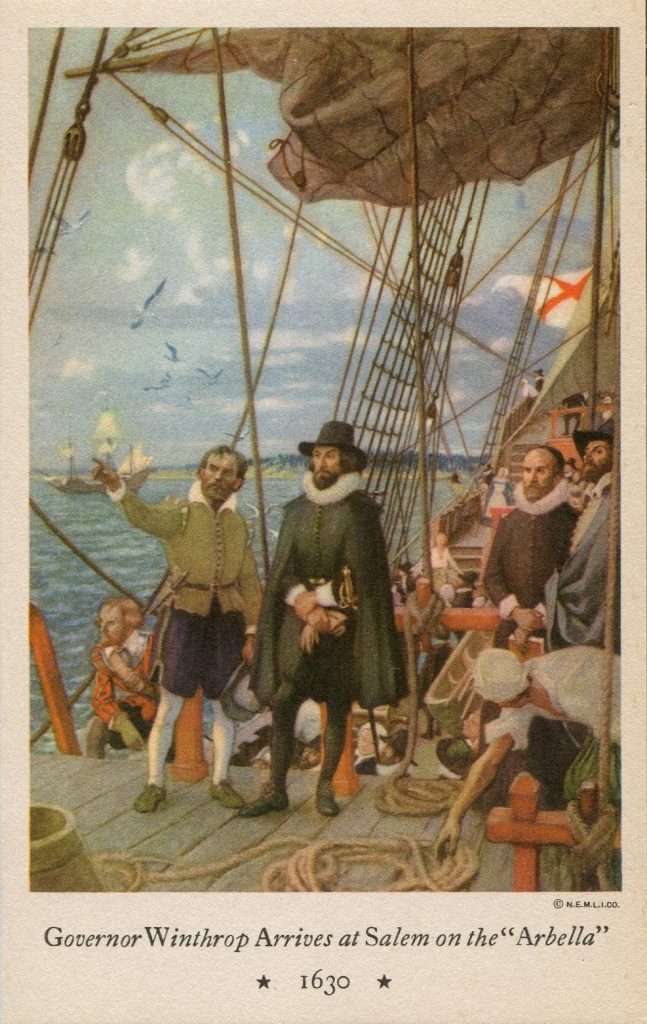 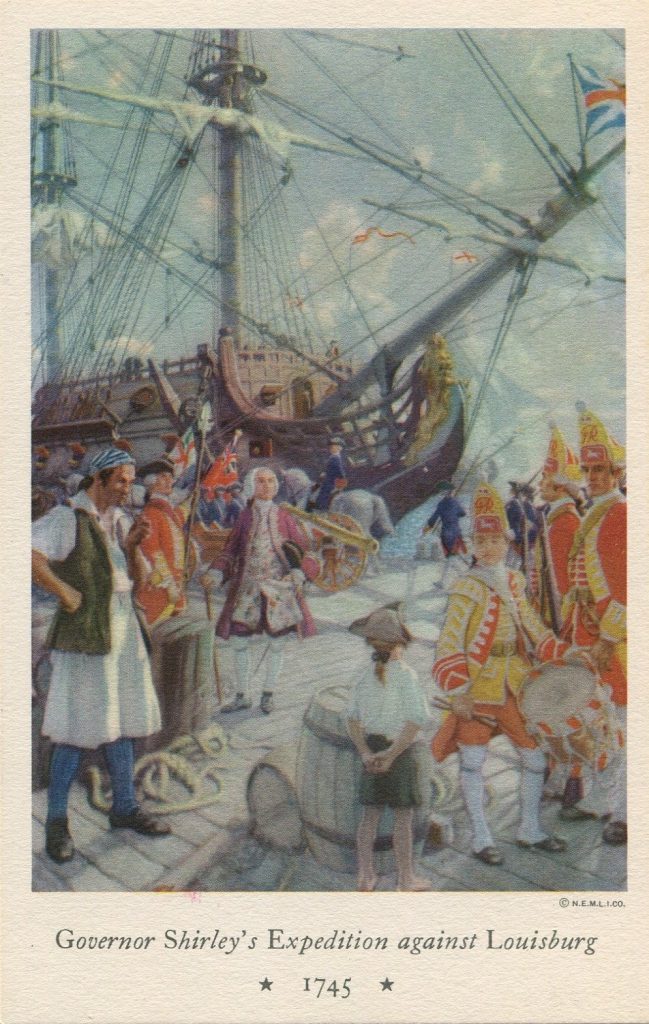 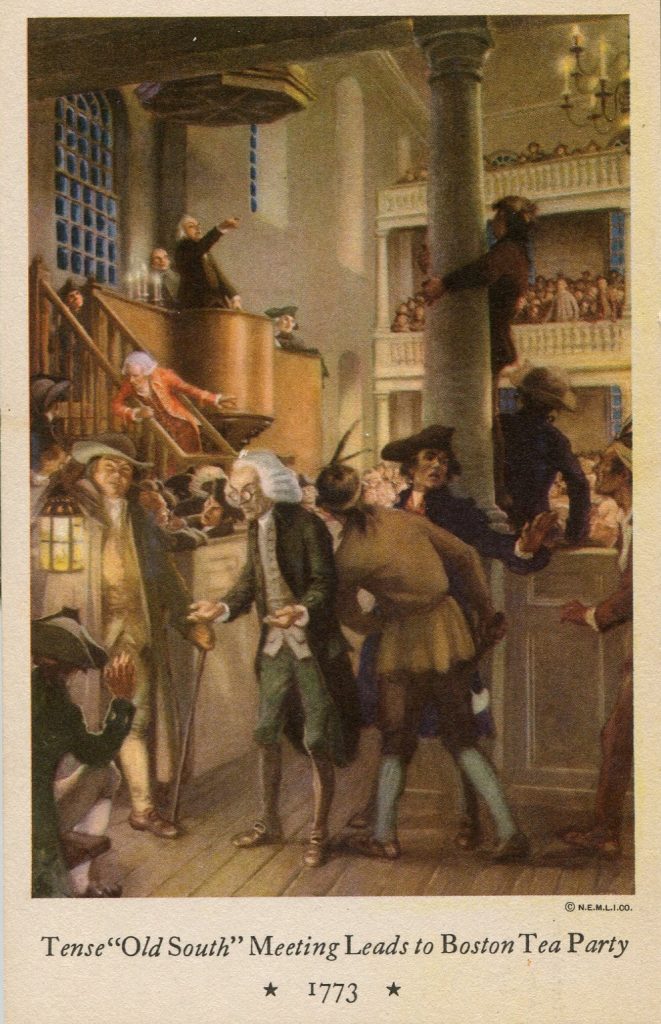 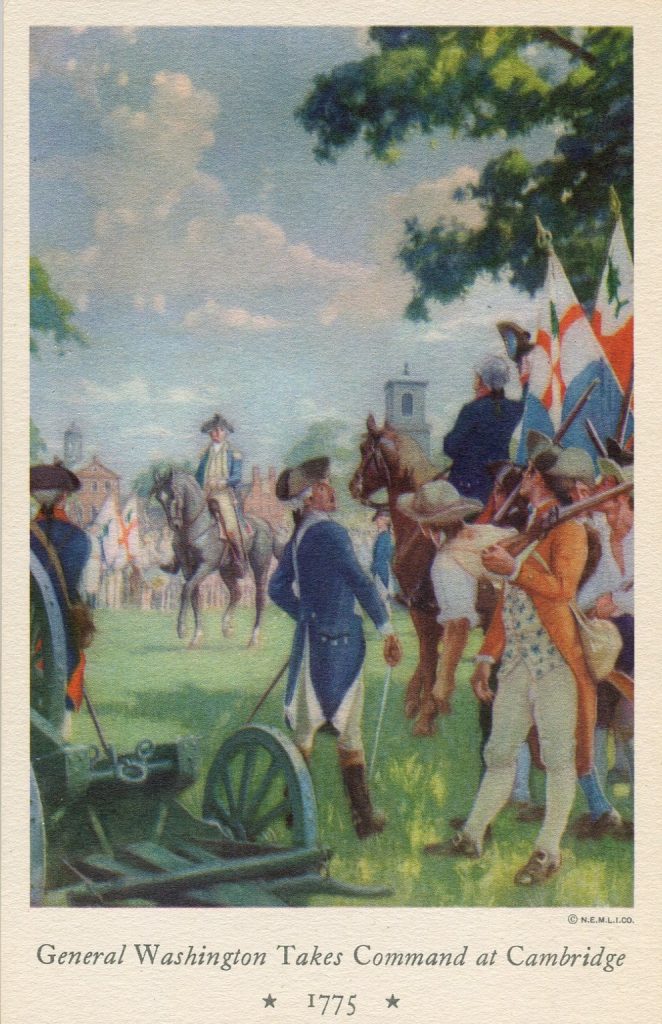 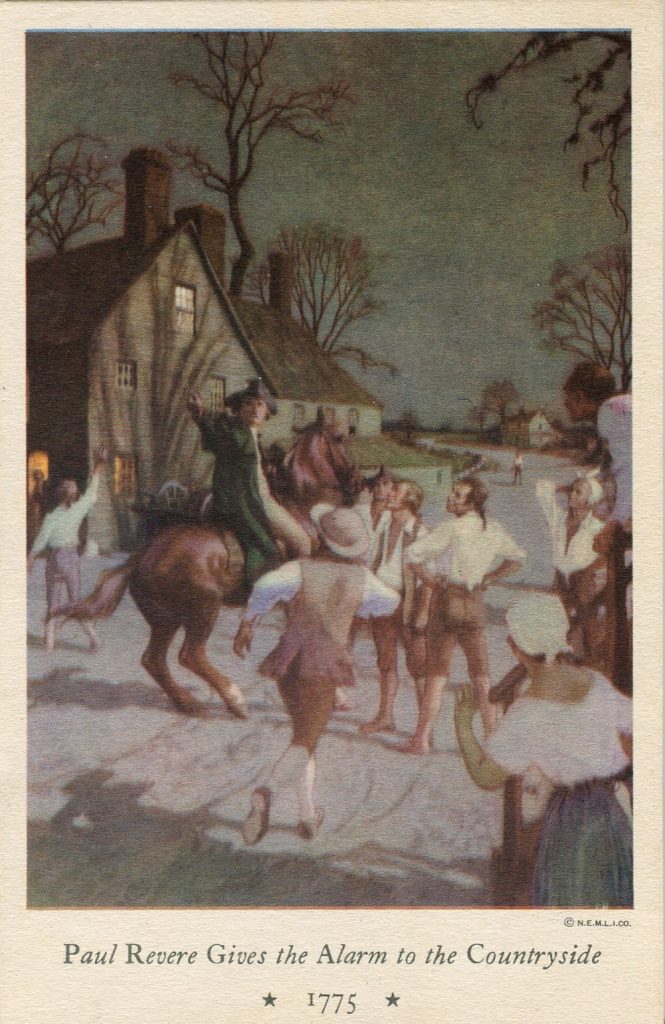 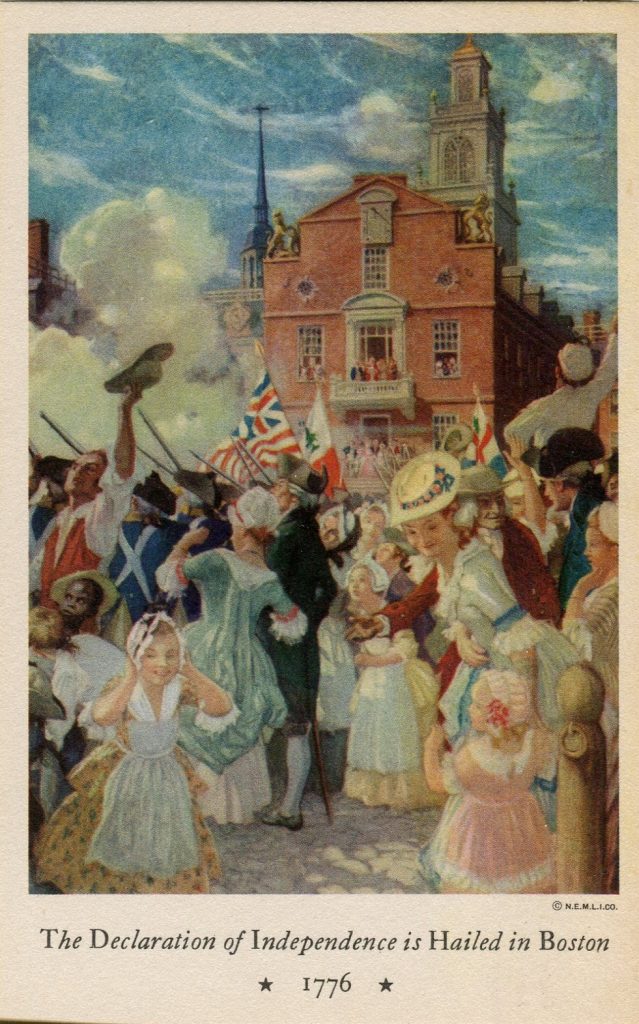 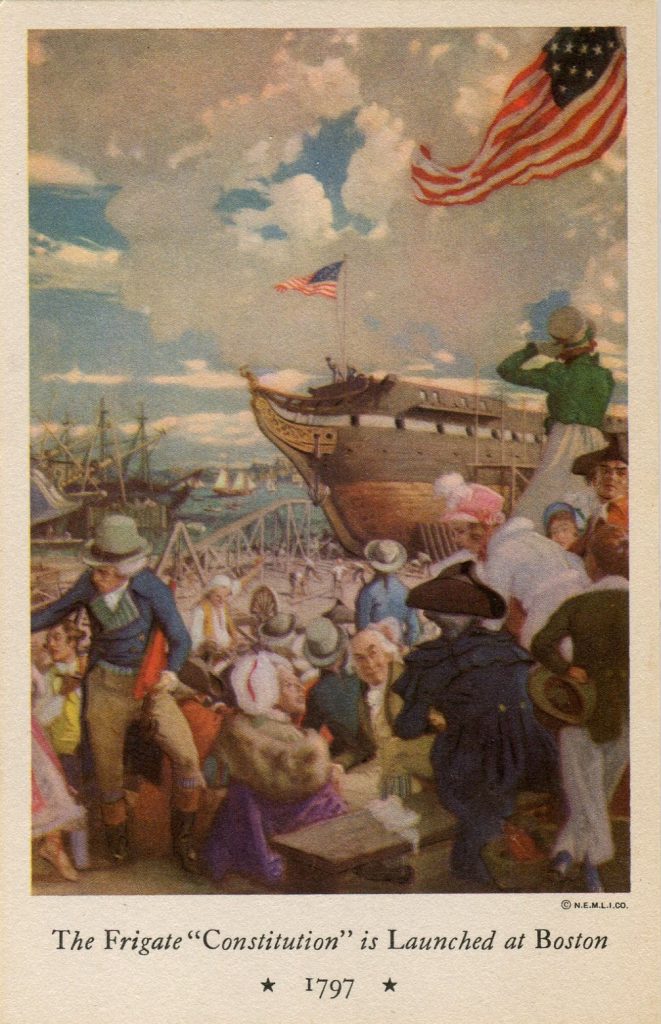 His Boston history murals garnered positive comments, with one reviewer stating, “This artist has managed to present history, not as a series of events, but as something alive and breathing.”

In the years that followed, Hoffbauer worked for numerous concerns, including the State of Missouri where he painted a mural in their new capital building. He returned to France and did decorative work in the Hall of Honor at Le Hotel des Invalides. He worked for Walt Disney for several years, then in 1952 he returned to New York to do the most unusual painting of his career. It was a tempera showing the surface of the moon with the Earth just above the moon’s horizon. It now hangs at the Hayden Planetarium in New York.

When Hoffbauer completed the moon-scape for the planetarium, his murals had spanned more than three centuries of history and that history was not only American. His time-honored work depicting Russian soldiers in Red Square was honored for its historical accuracy. He painted French history honoring Bastille Day and his history paintings of event in Italy sold in some European galleries at record prices.

Here in America, when a Hoffbauer painting of New York City, especially his street scenes on “rainy nights,” came to the block, his admirers would queue hours before opening just to get a glimpse of his newest work.

Charles Hoffbauer died in Boston on July 26, 1957. His obituary appeared in newspapers in hundreds of cities on three continents, but the entire notice ran just six lines in one column, including in most cases a line that asked that flowers not be sent.

Ellie McCrackin is a pen-name used by one of America's foremost archivists. Preferring to remain in the background, Ellie ghost writes for some of the leading world historians. She loves postcards and loves to write about the stories they tell.
PrevPreviousThree Famous Kansans
NextArches: A Series, Part IV-LondonNext
8 Comments
Oldest
Newest Most Voted
Inline Feedbacks
View all comments
Peter Meggison

In the 1970s and 1980s (perhaps later), the set of 8 post cards pictured was given out free to people who would visit the hall at the New England Life Insurance Company in Boston, where the paintings are displayed. Perhaps that is still the case! They are quite nice post cards.

Is your set in perfect condition, too, like these? The ones with this article have been “in the dark” for 30+ years. Maybe there is somebody in Boston who could test your theory that they are still available..

It’s interesting to learn that the murals are now on display at the Museum of Virginia History and Culture in Richmond, VA. I did not know that they were no longer in Boston. The New England Life Insurance Company in Boston also had four historical dioramas on exhibit; they also gave free post cards out of these which I have in my collection. Yes, my cards are in perfect condition. I have several extra sets of them which I acquired on various visits to the company in the 70s and 80s. When the pandemic is over, I’ll stop by the… Read more »

Hoffbauer was quite a talented artist. I just Googled “Four Seasons of the Confederacy”, and can’t help hoping that those murals are preserved even if the political climate demands they not currently be displayed.

The murals were carefully and beautifully restored at a cost of several hundred thousand dollars just a few years ago. They are on public display at the Virginia Museum of History and Culture in Richmond, VA.

While Charles Hoffbauer was a very talented and prolific artist, his moonscape painting was never displayed at the Hayden Planetarium. His lunar painting was a small 3×11.5-inch design submitted to the planetarium in the mid-1950s for their consideration for a mural. The Hayden awarded the commission to another artist, Charles Bonestell, whose Lunar Landscape mural was displayed beginning in early 1957. Only a few months later, photographs from Soviet and NASA spacecraft revealed notable discrepancies between the actual lunar landscape and Bonestell’s conjectural depiction. In 1970, the Hayden removed the’s mural and donated it to the Smithsonian’s National Air and… Read more »

Enjoy nearly all history and the vignettes provided with the postcards are outstanding snapshots of a seemingly endless array of subjects — great stuff. Thank you.

I love just looking at his artistry. What detail…. What a story to look at….