Fort Leavenworth, the first U. S. Army installation in the Kansas Territory was built in 1827. At the same time, Leavenworth became the oldest permanent settlement in the state. The state grew slowly but in 1854 the Kansas-Nebraska Act changed everything. The debate opened among the Free State and the Slave State factions. Therefore, how the future of Kansas was to be determined caused the territory to become a center of hostility and turmoil. The battles raged but at the end of January 1861 Kansas joined the Union as our 34th state. The “Free State.”

The Kansans of this piece did not play a significant role in state history, but they lived in Kansas and although the homes they lived in were humble, each one found its way onto a postcard. 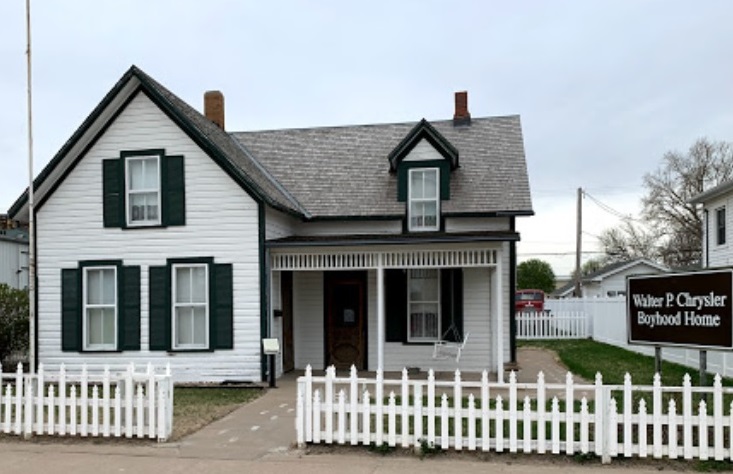 This modern card of the Chrysler home in Ellis, Kansas, shows the house as it is today.
Because of a flood in the 1950s, only one piece of the original furnishings survives.

Henry and Anna Chrysler moved to this little house in Ellis, Kansas, in 1878. Walter was three. The family and all their friends called Henry “Hank.” He was born in Canada and came to the states at age eight. He served in the Union Army during the Civil War and afterward joined the Kansas-Pacific Railroad as an engineer.

Walter Percy Chrysler was born in 1875. He attended school in Ellis and like his father went to work for the railroads. His employment coincided with the renaming of the Kansas-Pacific to the Union-Pacific. By 1897, Walter completed his initial apprenticeship and left Ellis, with his new wife, for a better life in Salt Lake City.

Chrysler moved many times in the next few years and worked in railroad roundhouses as a mechanic. By 1911, Walter reached the end of his railroading employment when he left his position as manager at the American Locomotive Company in Pittsburgh, Pennsylvania.

Through an intermediary at the local bank, Walter Chrysler met Charles Nash, who at the time was president of the Buick Motorcar Company. Chrysler was hired to manage the production of Buicks in Flint, Michigan.

His cost cutting measures became legendary. Walter Chrysler was the genius who invented the undercoating used to preserve the framework of an automobile. Walter kept control of Buick until he acquired the controlling interest in the Maxwell Motor Company, which he phased into the Chrysler Company.

Walter retired in 1936. He died in 1940 at his home in New York. He is buried at Sleepy Hollow Cemetery in Sleepy Hollow, New York. 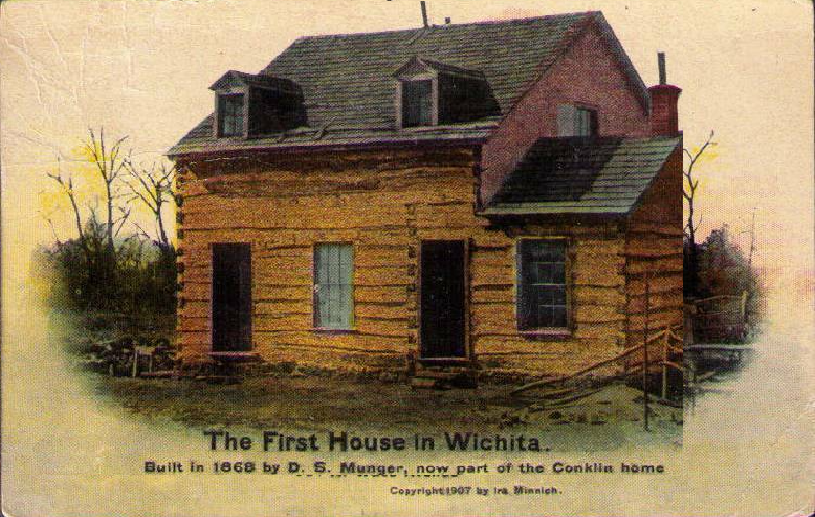 This undivided back card, circa 1904 shows the first permanent home in Wichita, Kansas.
Built in 1868 by Darius Munger.

Darius S. Munger was born in western New York in 1812. Little is known of his childhood, but it is certain the Darius was born with a pioneer spirit.

Munger was appointed the first postmaster in 1870 and his home instantly became the post office and the first hotel. Since Munger was such a dominant figure in the development of Wichita, he also played host to town meetings and acted as Justice of the Peace.

Darius Munger died in December 1879. He was 67.  His wife outlived him by 15 years and when she died in 1894, she was the oldest resident of Wichita, as reported by The Saturday Evening Kansas Commoner. 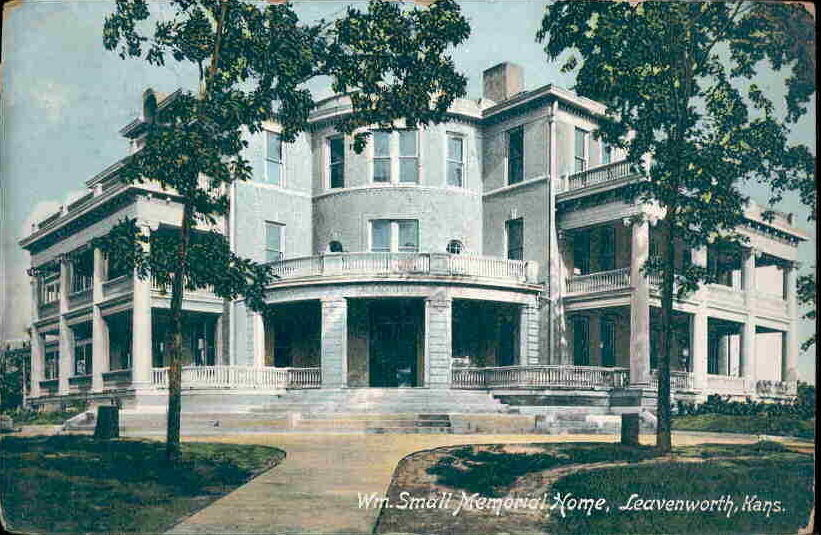 It is peculiar that a place known as the William Small House is a place William Small did not live, did not own, and never saw. Nevertheless, this house with his name is listed in the National Register of Historic Places.

Constructed between 1903 and 1904, the Small home provided a communal dwelling space for elderly single women until 1974. The building was purpose-built for the Old Ladies’ Rest organization and was financed by Zephy Small, the widow of William Small. It served its purpose for seventy years.

William Small lived in Leavenworth, Kansas, for more than 30 years. Although he was liked, and his character was respected he was sometimes misunderstood. Many of his business dealings were frequently questioned as to his intent and attitude toward citizenship and towards the larger social life of Leavenworth.

Small was born in Canada in 1841. He was married in Hamilton, Ontario, to Zephy Steele and they left Canada together for the United States and picked-up their lives in St. Louis, Missouri. He was a dry goods salesman for D. Crawford & Company.

He moved to Leavenworth sometime after 1872 and by 1875 had become a member of the firm of Weaver & Small. Other associations followed and his business affairs subsequently came under his sole ownership, and through his fine integrity and ability he made it the most important retail establishment of the city. Throughout his career his honor was his most perfect possession.

His death occurred at Chicago on March 1, 1900. The Smalls had no children. Three years after his death his widow donated a portion of his estate to the ladies home organization, but his best monument is the mercantile establishment (William Small and Company) that still carries his name.

The Staff of Postcard History offers this article for your enjoyment. It is a combined effort of many: our publisher, editor, webmaster and collectors/contributors far and wide. Please use the COMMENTS feature below to let us know how we're doing.
PrevPrevious2021 Know-it-All Quiz #1
NextCharles Hoffbauer & His History MuralsNext
2 Comments
Oldest
Newest Most Voted
Inline Feedbacks
View all comments
Bob Kozak

Of course I had heard of Chrysler, but never knew the Munger and Small stories until today.

Interesting facts about Kansas. I lived there for a year and didn’t know this stuff… Thanks!!