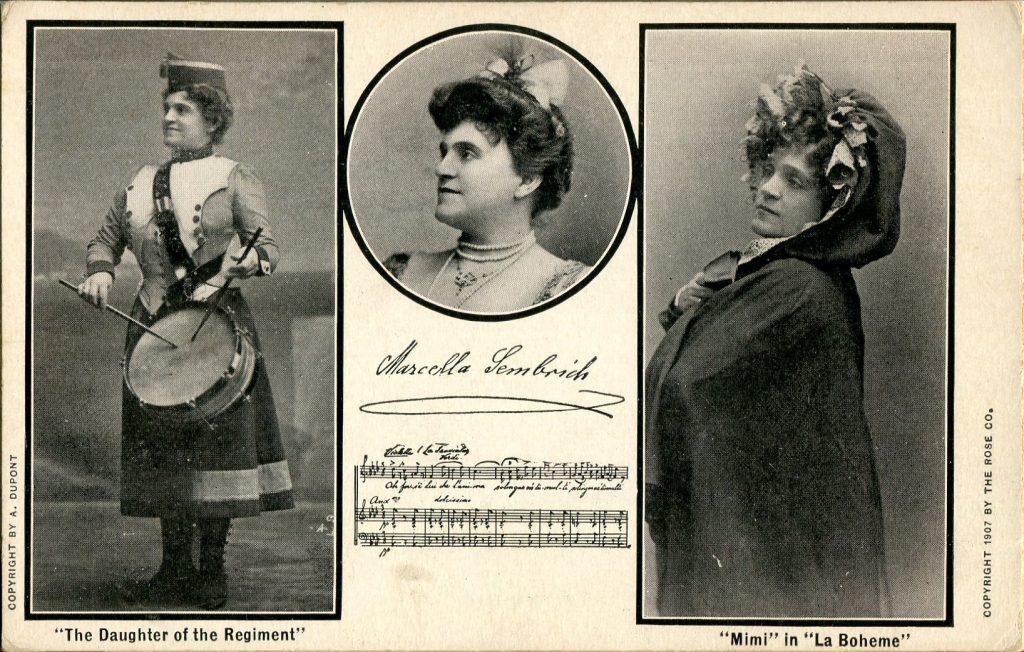 When Marcella Sembrich died in a Central Park West, Manhattan apartment 86 years ago today, she was alone, sick, and nearly forgotten. Her death was caused by angina pectoris, from which she had been ill for more than two months. She was 76, one month shy of her birthday. Mme. Sembrich was living with her son and daughter-in-law, the only relatives she had in America.

When I opened a bright-red envelope tied with a white ribbon on Christmas morning, I was delighted to find an addition to my collection of opera postcards. I stared at it in delight. There were so many reasons: I had never seen the card before, I did not know the name of the featured singer, the publisher’s name was new to me and the paper was a full millimeter thick much like double-thick card stock. The back is undivided and the postal banner says that it is a “MAIL CARD” instead of a “Post Card.” Marcella Sembrich was internationally famous for her interpretations of more than fifty operatic roles created by composers and librettists through two centuries of musical tradition.

Born on February 15, 1858, into a musical family she studied both violin and piano, but shortly after her professional debut, she was advised by none other than Franz Liszt himself, to concentrate on the vocal arts.

Marcella began singing professionally in 1877 at Athens, Greece; she was 19. She followed her debut the next year in Dresden, Germany. In June 1880 at age 22, Marcella made her international operatic debut singing the title role in Donizetti’s “Lucia di Lammermoor” in Covent Garden, London. Her “Lucia” performance in London made it possible for Sembrich to move on to Berlin, where she established a travel hub that led to St. Petersburg and Moscow in the east and New York, Chicago, and San Francisco in the west.

The only soprano of her era with a two-and-a-half musical octave, she enjoyed success every place she sang and frequently returned home with gifts from royalty and nobility. In those active years, Marcella managed to log 466 performances. One especially memorable performance took place in April 1906 in San Francisco. After the earthquake she spearheaded a series of Carnegie Hall recitals to raise money for the victims.

Marcella continued to work until 1917, the year of her husband’s death. He had worked in Europe and America as a music professor. Once she left the stage her attention turned to teaching at universities in New York and Philadelphia.

Throughout her career, Sembrich made hundreds of records on European and American labels. The most notable of her recordings were done for Columbia Records and RCA. Some of the early RCA recordings are still available in sound-enhanced versions on CDs.

The Legacy of Marcella Sembrich 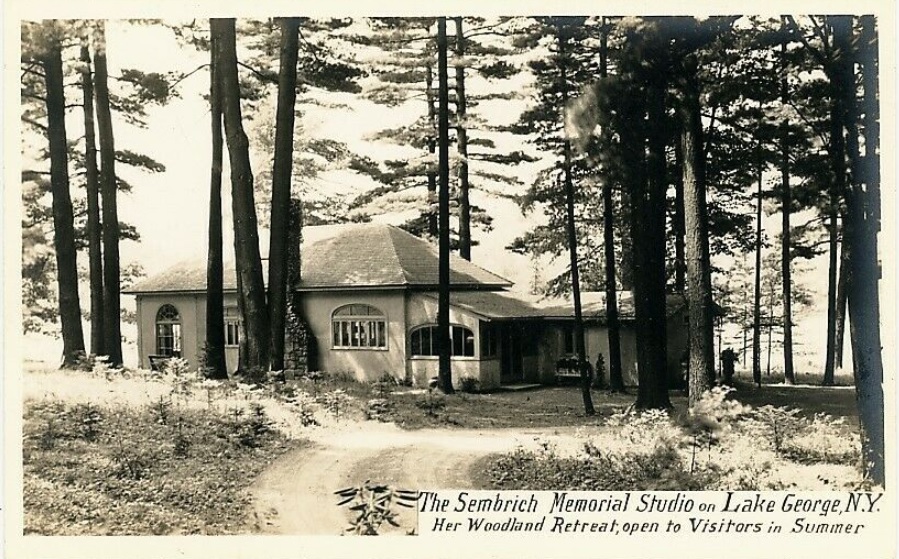 The original Sembrich estate in Lake George, New York, encompassed over 55 acres. The teaching studio was an intimate Spanish revival building erected following her appointments to the voice faculties of Juilliard Graduate School and the Curtis Institute of Music.

The studio was a summertime retreat from the cities. Sembrich brought students to study with her each summer from 1925-1934. Students enjoyed summers in the mountains and performed at local venues such as the Lake George Club.

Following Marcella’s death in 1935, her daughter-in-law kept the parcel of land with the studio and opened it to the public in 1937 as a memorial to Sembrich. Soon after, in 1940, former students and colleagues formed the Marcella Sembrich Memorial Association to maintain the studio and grounds and continue to perpetuate the legacy of Marcella Sembrich. The land was officially conveyed to the Association in February 1940.

Today, the Sembrich Studio remains the perfect destination in the Adirondacks to explore music, history, and nature. The studio is listed on the National Register of Historic Places.

Ray Hahn is a retired educator, but he has never stopped teaching. His decades of researching, writing and editing a newsletter for the South Jersey Postcard Club has been a world-class education in trivia. In addition to postcard collecting, Ray’s other interests include history, genealogy, and touring the world with his wife Marie. Ray often advises his readers to "Join me as we explore the world one postcard at a time." Ray and Marie live in New Jersey.
PrevPreviousThe Battle of Kings Mountain
NextTragedy on the Chippewa RiverNext
1 Comment
Oldest
Newest Most Voted
Inline Feedbacks
View all comments
Bob Kozak

I can’t say I had ever heard of Marcella either.