Tragedy on the Chippewa River 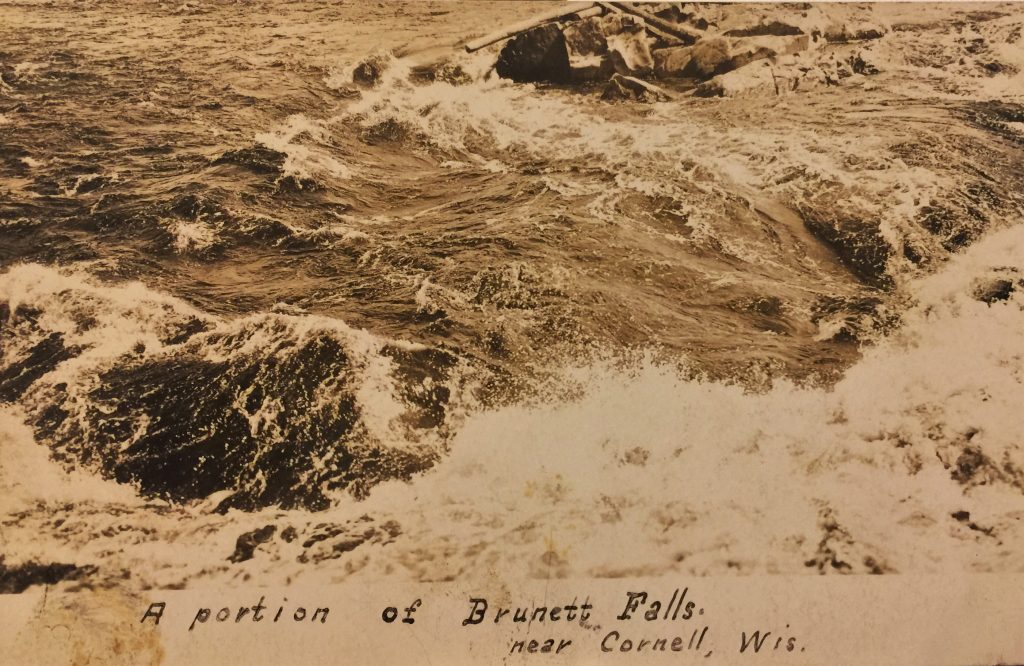 Brunet Falls on the Chippewa River, in Northern Wisconsin

This postcard mailed at Holcombe, Wisconsin, traveled but 25 miles to the village of Cadott, but both are located near Chippewa Falls, Wisconsin, an important sawmill town during the logging boom of the late 19th and early 20th centuries.

The Chippewa River, like many in northern Wisconsin, was used to move logs to sawmill towns. Others included the Flambeau, Wolf, Peshtigo, St. Croix, Oconto and Menonimee. The lumberjacks set up winter camps in the forests and spent their days felling and limbing trees, then moving the logs to the rivers.

In the spring, when the water was high (and cold), they floated the logs down river to the sawmills. These men traveled in bateaux, and their provisions were hauled on rafts known as wannigans. One of their most dangerous tasks consisted of breaking up log jams that formed in the rivers.  These river drivers, who wore caulked (spiked) boots, had to climb onto the floating logs and break apart the jams – extremely dangerous work.

This card was sent on May 5, 1910, from someone whose last name was Hunter, to a man named George A. Miller. Mr. Miller’s father was named Ferdinand Miller. The elder Mr. Miller, his wife, and George are listed in census records as having lived in Cadott from 1885 through 1905. A 1910 record, however, lists only George and his mother as living there.

The message on the card explains why Ferdinand was no longer listed in the census records.  It reads as follows:

“Friend George, Happen to have this card and thot (sic) that you might like to have it.  It is where your father met death. It does not show all of the falls. How are you making it, everything is going on nicely here.”

On June 29, 1906, a local paper, The Herald ran the following piece explaining the death of Ferdinand Miller:

“George Miller, one of Arnold’s popular clerks was called to his home at Cadot (sic), Wis., on Tuesday because of the news that his father who was a cruiser for a large lumber company, had been drowned.”

More information was provided by the Chippewa Herald in its June 27th edition, under a headline that read:  “Another Life Lost – Ferdinand Miller, Log Driver of Cadott Drown (sic) in River at Jim Falls Yesterday.”  The text of the article was:

“Ferdinand Miller, a log driver employed by the Chippewa Lumber & Boom Company., near Jim Falls, was drowned in the river at Jim Falls yesterday morning. The crew was at work on a jam about 20 yards above the bridge at Jim Falls. Miller was on the head end of the jam and was carried away with a section that broke loose. A short distance below the bridge the section broke and Miller went down.  That was the last seen of him and a search failed to recover his body. Mr. Miller was about 50 years old and leaves a wife and one son about 26 years old.”

The mention of “another life lost” hints at the dangers of river life during the logging years. Records recount an even greater tragedy that happened on that stretch of the Chippewa on July 7th of previous year. That accident also involved a party of men employed by the Chippewa Lumber and Boom Co.

In this case, sixteen men were in a twenty-six foot long bateau on the river near Holcombe trying to break a log jam. At 10:30 in the morning the boat overturned.  Another bateau was launched in an effort to rescue the men, but eleven of the sixteen drowned. A marker still stands in Holcombe in memory of those lost men.

Another source indicates that some of the men had been drinking heavily. Alcohol was a recipe for disaster in logging camps and on the rivers. It was prohibited by many logging companies. In some cases, loggers were known to bring patent “medicines” with them to the camps to ease the transition when each season began.

The dangers of the rivers were not confined to the drivers. With mill towns built alongside rivers, sometimes other community members were lost. The story of one death in the river was told in the May 16, 1905 edition of the Eau Claire Telegram. The article recounted the drowning in the Chippewa River of an eleven year old boy named Fred Kenney.

Young Fred was playing near the river with a friend. The friend went to pick flowers, and when he returned, he couldn’t find Fred. By the time he could summon help, it was too dark to search. The next day, a search party found Fred’s shoes and socks by the river.

They dragged the river and found his body miles downstream in Caryville, Wisconsin.  Almost unbelievably, ten years earlier Fred’s older brother Arthur had drowned at the same spot when he was eleven years old. Death in the Chippewa River was too common in those days.

The falls shown on the card was named for the early settler Jean Brunet, who built some of the first logging dams on the Chippewa. The city of Cornell now stands at the site of Brunet Falls. Chippewa Falls was one of the busiest sawmill towns in the Upper Great Lakes during the logging boom.

The Chippewa Lumber and Boom Company, which employed Ferdinand Miller, was one of the largest logging concerns in the upper Great Lakes states. In 1890, its mill in Chippewa Falls produced 51,500,000 board feet of lumber. Amazingly, by 1911 much of the Chippewa Valley had been clear cut and the mill ceased production and was sold for scrap.

One of the last big drives occurred on the Pelican River near Rhinelander, Wisconsin, in 1923. The log drives in Wisconsin ended around 1930, less than 100 years after they began. The forests regenerated and logging has continued, albeit it is now mechanized. 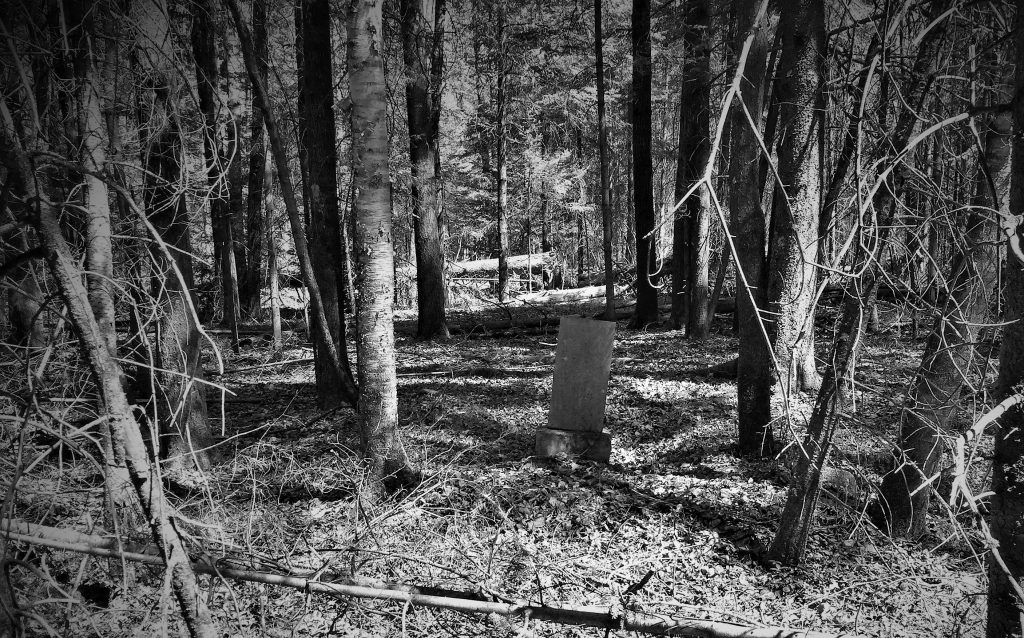 Grave site in the Wisconsin woods

The days of the river drives are over, but there are reminders. Parts of old logging dams, tools, clay tobacco pipes, and patent medicine bottles which were dropped by lumberjacks during the drives are still being found. Small cemeteries in Wisconsin river towns like Lily, Parrish, and Presque Isle contain graves of many lumberjacks killed during the spring drives.

Very informative and well written. Interesting to learn just how dangerous this profession could be.. Thanks

Living in WI and having done some backroads over the years, I appreciated your well written article. I have hunted for Ghost Towns, most are lumber mills or logging towns, and there are also old railroad sites that were also connected with the logging industry. There’s a logging museum in Rhinelander (Home of the Hodag, which came from loggers) if anyone gets near there.

Thank you Pete! I live in Rhinelander and enjoy the museum. I’m a trout fisherman and have found some remains of old logging dams in Wisconsin and the U.P.

Thanks for the great read!

what a sad story