The Battle of Kings Mountain

After his success in battle at Camden, South Carolina, Revolutionary War General Cornwallis decided to march into North Carolina. The General sent Major Patrick Ferguson, a native of Aberdeenshire, Scotland, into the backcountry of South Carolina to protect his left flank. As a British officer, Ferguson was an advocate of light infantry, who had designed his own rifle and was successful in recruiting nearly 1,000 British loyalists in South Carolina to fight with him.

Ferguson arrived in North Carolina with his militia in early September 1780. He issued challenges to the locals to lay down their arms or suffer the consequences.  He made it clear that he would kill anyone in his way and destroy their towns and homes.

Ferguson’s comments cultivated serious anger from the backcountry forces. Col. Isaac Shelby and John Sevier agreed that they should take the offensive. They called for a rendezvous on September 25 at Sycamore Shoals, now in Tennessee. On that day, Sevier and Shelby arrived, with 240 troops known as the “over the mountain men,” to join Col. Charles McDowell who was already there with 160 North Carolina riflemen. They were later joined by Col. William Campbell from Virginia with 400 troops. They would pick up another 100 troops in the area of Burke County, North Carolina.  By October 1, they were near Kings Mountain with 900 eager to fight militia. The mountain was named for the King family that maintained a farm at the base of the mountain.

After receiving information on a pending attack, Ferguson decided to join Cornwallis near Charlotte. It was October 7, 1780, with the Patriots versus the Loyalists at Kings Mountain, close to the border of North and South Carolina.

Ferguson positioned his men atop the mountain expecting the high ground to give him the advantage. That the Patriots caught up with Ferguson was a complete surprise. Ferguson, who was well known for his silver whistle signals, ordered British troops into a bayonet charge down the mountain. The Patriot attack came from behind and they killed Ferguson, after which his men surrendered. 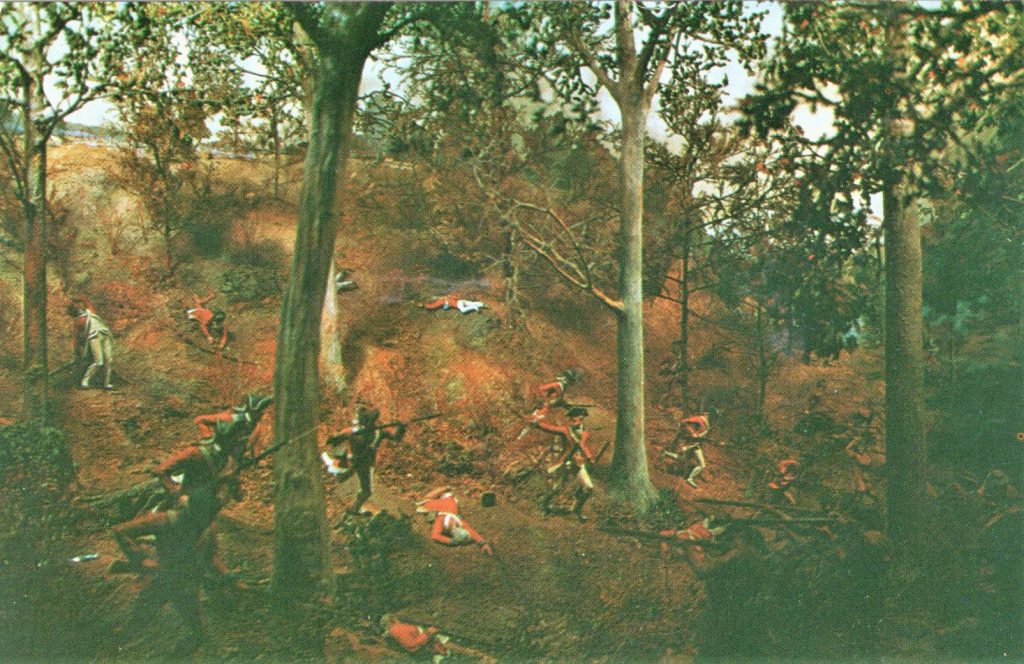 The Kings Mountain battle was a pivotal moment in the Southern campaign.  The victory by the American Patriot militia over the Loyalist came after a string of patriot defeats at the hand of Cornwallis.  The mountain victory raised the morale of the southern patriots. With Ferguson dead and his Loyalist militia destroyed Cornwallis was forced to abandon his plan to invade North Carolina.

The estimated casualty count of this battle was 1,211. 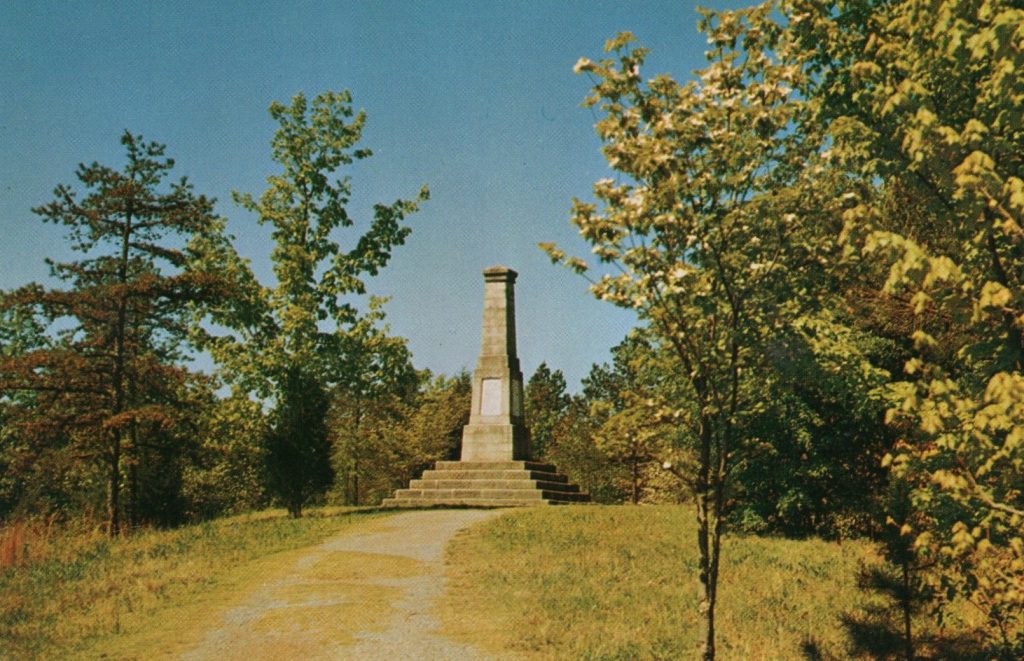 Monuments were placed on the site in 1815 and in 1880. The later by the Kings Mountain Battleground Association, for the centennial. 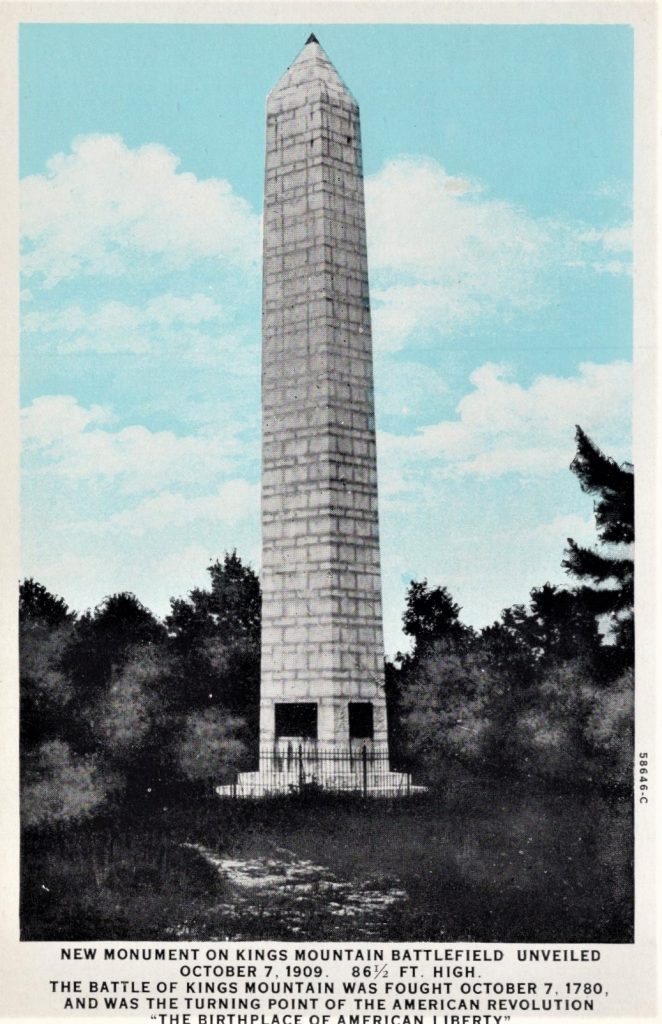 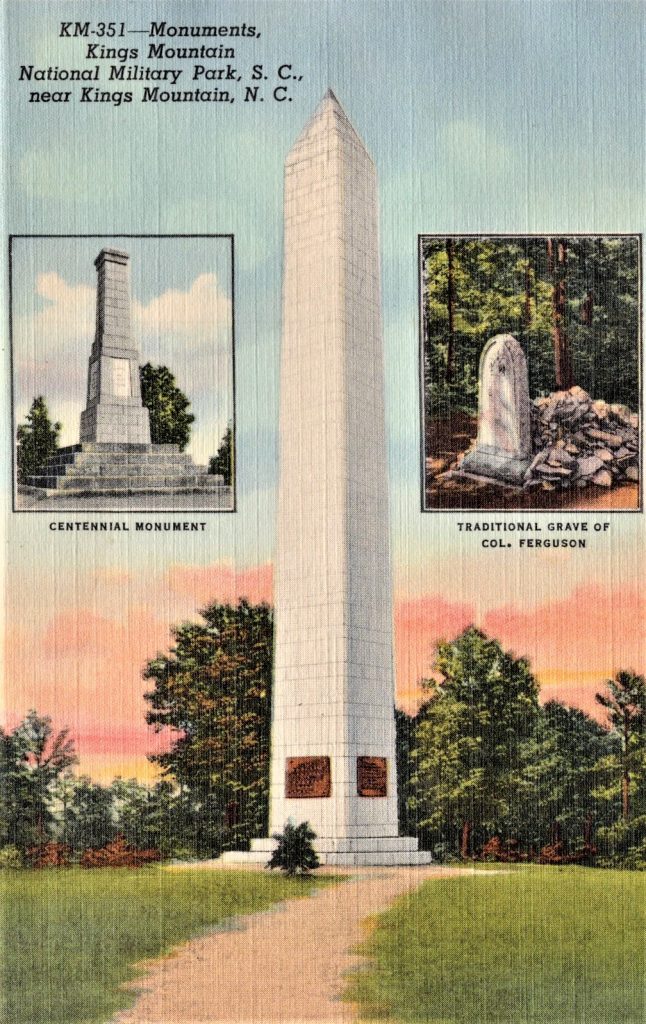 It may be that the Battle of Kings Mountain is remembered today by only those who are aware of a few monuments on a hill, but the historical significance makes us sure that it was a struggle and a turning point that inched the patriots to victory in the American Revolution.

Tony Crumbley has been a collector of stamps and postal history since childhood. He has authored numerous articles over his career as a philatelist. He is the current Co-Editor of the North Carolina Postal History Journal, a job he has had for over 25 years. He is a General in the Civil War Philatelic Society where he served as president. He lives with his wife, Renea, in Charlotte, North Carolina, and is the retired Vice President of Research for the Charlotte Chamber of Commerce.
PrevPreviousArches: A Series, Part IV-London
NextMarcella SembrichNext
4 Comments
Oldest
Newest Most Voted
Inline Feedbacks
View all comments
George Slaton

Great article highlighting a pivotal battle of the American Revolution in the South. A cool battlefield to visit and explore!

Calling the Loyalists “British” can be misleading. Ferguson’s soldiers were all American.

My wife and I visit my Daughter and our grand sons who live in Anderson, SC. We have traveled to many historic places in the state but have missed this one, so far. We will be going here on our next trip east from California. Thanks!

Interesting article although I have little connection to the area.