Part One of Six

First, contrary to popular belief, Franklin D. Roosevelt was not our richest president. In a comparative study done in 2016 (and adjusted to 2016 dollars) by a Wall Street investment firm, FDR is ranked tenth among our millionaire presidents. Mr. Roosevelt is proceeded on the list by William Jefferson Clinton at $75M and followed by John Tyler and Barack Obama. At the time of FDR’s peak net-worth his estate was valued at a mere $66 million.

Second, Franklin D. Roosevelt never owned his own home until after the death of his mother Sarah (nee) Delano Roosevelt, and the name of his home was not Hyde Park. The name of the Roosevelt estate in Hyde Park, New York, is Springwood, and the property is currently owned by the National Park Service.

The historic estate was once comprised of over 1,500 acres and rests on the bank of the Hudson river just over ninety miles north of New York City. A significant portion of the house is original to 1793, but substantial renovations were accomplished in 1850 and a considerable addition was completed in 1916. The later work included the raising of the roof to make room for a third floor. At the same time the outer appearance of the home took on a U-shape with stucco façade that was dubbed a colonial revival style.

A visit to Springwood is a popular Hudson River valley tourist attraction. The interior of the home is furnished with decor that were popular with those of the Roosevelt’s social and economic status. The rich architectural details and the family’s personal belongings are substantially recorded on a six-postcard set by the New England artist, Ruth Perkins Safford. 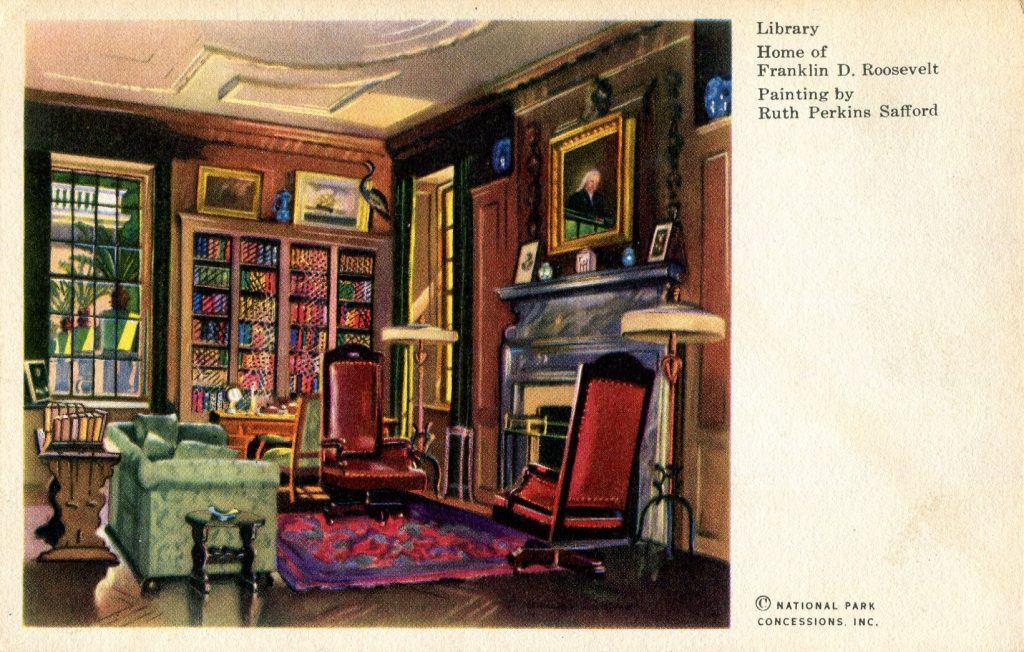 The Library, A Painting by R. P. Safford

This card was chosen for inclusion for one reason. It is the room in the home where Mr. Roosevelt worked on his collections. Like we who collect postcards and are devoted to them, the president collected books, paintings of navy ships, ship models, and postage stamps. One memorable account by a member of his family claims that his stamp collection included over one million specimens. He also collected coins and political campaign buttons.

There is no mention yet found that suggests that FDR had any skills in taxidermy but his personal inventory lists over two hundred common as well as rare avian mounts.

As a president’s home, Springwood is full of history – as they say, “… if these walls could talk.” One particularly memorable incident at Springwood was the night the president learned that the Republicans engaged in the campaign of 1944 had created a story that the president had accidently left Fala, his pet Scottish Terrier, behind during a fact-finding tour in Alaska and had sent a US Naval ship, at taxpayer’s expense to rescue the dog. Later that month in September 1944, FDR gave a speech to a teamster’s union in Washington, DC, and included the following remarks:

These Republican leaders have not been content with attacks on me, or my wife, or on my sons. No, not content with that, they now include my little dog, Fala. Well, of course, I don’t resent attacks, and my family don’t resent attacks, but Fala does resent them. You know, Fala is Scotch, and being a Scottie, as soon as he learned that the Republican fiction writers in Congress and out had concocted a story that I’d left him behind on an Aleutian island and had sent a destroyer back to find him – at a cost to the taxpayers of two or three, or eight or twenty million dollars – his Scotch soul was furious. He has not been the same dog since. I am accustomed to hearing malicious falsehoods about myself … But I think I have a right to resent, to object, to libelous statements about my dog.

It was FDR’s hope to leave the house the way he left it to the American people. Soon after his death, the family transferred ownership to the National Park Service and in 1946 the Home of Franklin D. Roosevelt National Historic Site opened to the public.

As his home, Springwood tells much of Franklin D. Roosevelt’s life. It demonstrates his character, his individuality and his beliefs, but Springwood is not the only places that interpret FDR’s legacy to America. In addition to Springwood, President Roosevelt frequently visited the family’s summer cottage on Campobello Island in New Brunswick, Canada, and his Little White House winter retreat in Warm Springs, Georgia. These pieces of FDR’s life are different stories for another page in Postcard History. Later! 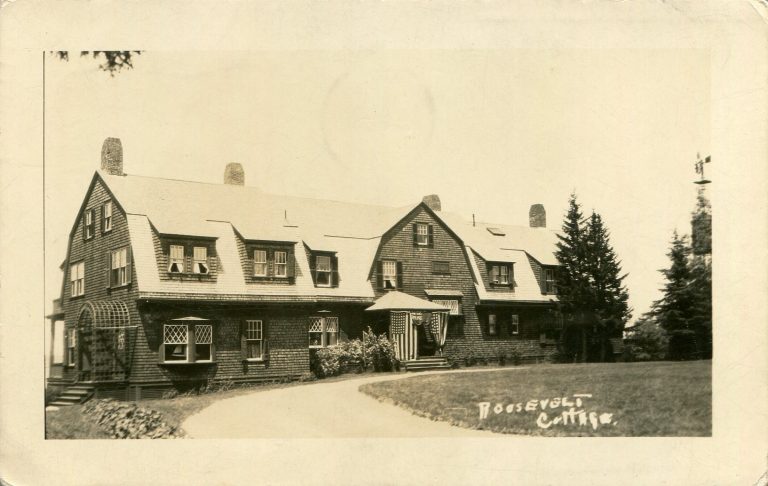 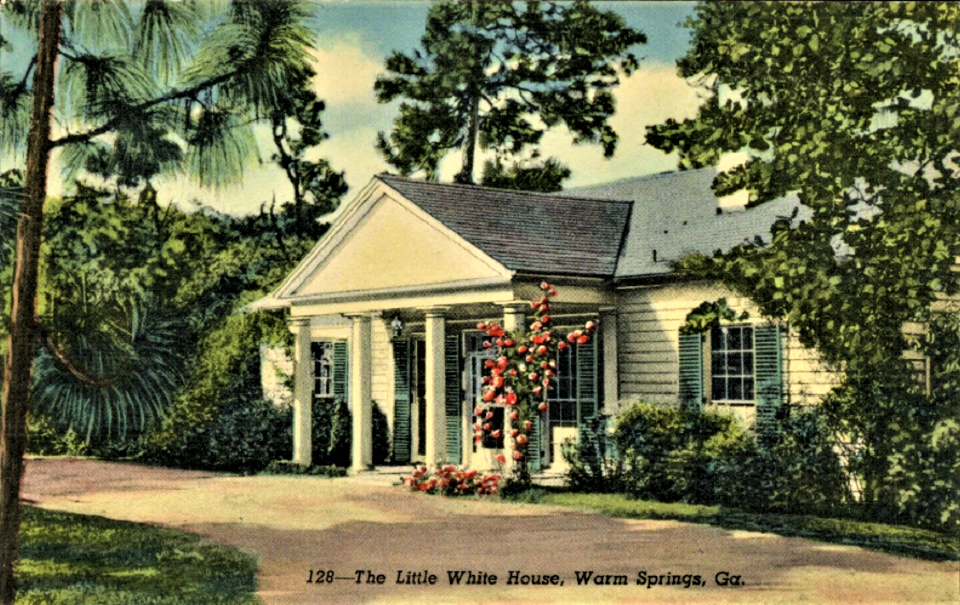 The Staff of Postcard History offers this article for your enjoyment. It is a combined effort of many: our publisher, editor, webmaster and collectors/contributors far and wide. Please use the COMMENTS feature below to let us know how we're doing.
PrevPreviousA Postcard History of the Hippodrome
NextThe Story of the LoreleiNext
7 Comments
Oldest
Newest Most Voted
Inline Feedbacks
View all comments
StefanSommerfield

Great introduction for people who have not visited Springwood. I have been many times having lived in Hyde Park for a few years. Admission to grounds is free and I used to read d on a bench overlooking the river valley.

Hooray for Bill.Burton.
No, I don’t want a postcard image on a coffee mug
You left out the famous linen card of Fala siting by FDR’s grave

You’d like a coffee mug with adorned with a postcard of Fala at FDR’s grave site? We can do that, Michael.

I have visited Springwood. It is beautiful. Loved the story about Fala… Good article..;

The “cottage” contained 34 rooms, including 18 bedrooms and six bathrooms. The cottage was comfortable, but had neither electricity nor a telephone. Providing running water for bathing, cooking, and cleaning required a windmill or pump and a complex system of storage tanks in the attic. Seven fireplaces and the kitchen stove provided the only sources of heat.

I had to search a bit to find these details, which I thought would be interesting after seeing the images of the “cottage”. Sounds lovely but cottage is a bit understated?

A visit to Spingwood is a must for people interested in FDR is a must. The Park Service guides are very knowledgeable about the man and his times. The home is folksy and authentic 1940’s Americana. The Presidential library on the property is an amazing storehouse for scholars and the public. Great place to take photos and enjoy the Hudson River valley.