The Stately Mansions of Natchez

In the world of American architecture, “Southern Colonial” is a style that uses and elaborates on well-defined elements from a specific period – circa 1765 to 1849. The adjective here, “southern,” suggests that the style was most popular in states where wealth was accumulated in prolific amounts because of very low-cost labor. For numerous reasons, the features and elements adopted in the south were reminiscent of the Greek Revival, which is frequently defined as a large, framed, two or three story home with a roof covered colonnade extending across the front. Also, with interior elements of high-ceilings with tall windows, singularly flued fireplaces, wide-plank wood floors, and adorned by ornate woodwork or plasterwork.

The Southern Colonial home had one dominant characteristic: symmetry. The front of the house was constructed with a very exact sense of balance, the front door was always placed at the center and the windows facing the property’s gate were framed with dark (black or green) shutters. The interior sub-characteristics included matching chandeliers in the front rooms, a grand staircase, and a devoted dining room and game room in back.

Not because it is stereotypical, Natchez, Mississippi was chosen as a perfect site for this study. The choice was that this historic city is today home to many Southern Colonial homes, that are owned or administered by a group of well-intentioned preservationists. They were once referred to by a local banker as the “steel-crinoline crowd,” but they work hard keeping history alive. Natchez was once a wealthy city of residents with widely divergent social traditions, and for the most part it still is.

Before we begin this tour of five properties, a word about the National Register of Historic Places. The register is the official United States list of historic places within the territorial boundaries of the country and other significant places outside the country where citizens have made American history. Currently there are more than one million sites in the register, which in and of its own, dilutes the significance. Suffice it to say, some of the cites here are included. 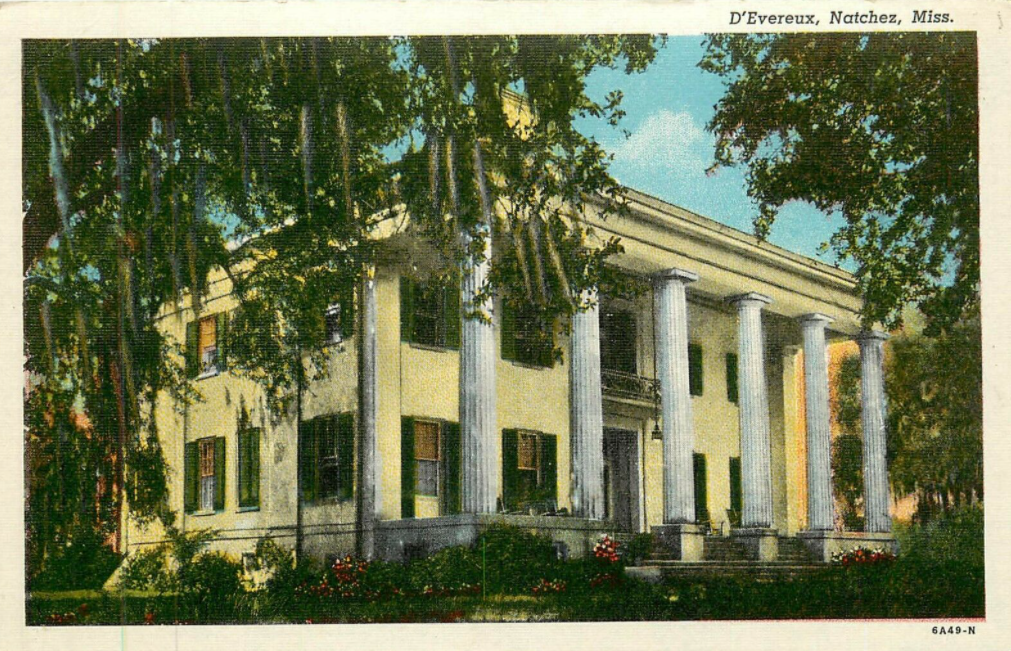 William St. John Elliot was a plantation owner. When he, and his wife Anne, had their home built they chose the location based on the view from what would become their portico. It was completed in 1836. There is no record of the architect or the builders although it is generally believed that they were hired from Virginia or Ohio. The deed was drawn with the named D’Evereux, which was Anne Elliot’s maidan family name.

The columns are fluted Doric columns spaced twelve feet apart. They are twenty-four feet tall. The D’Evereux was the first Natchez mansion with a cupola. It is currently a private home. 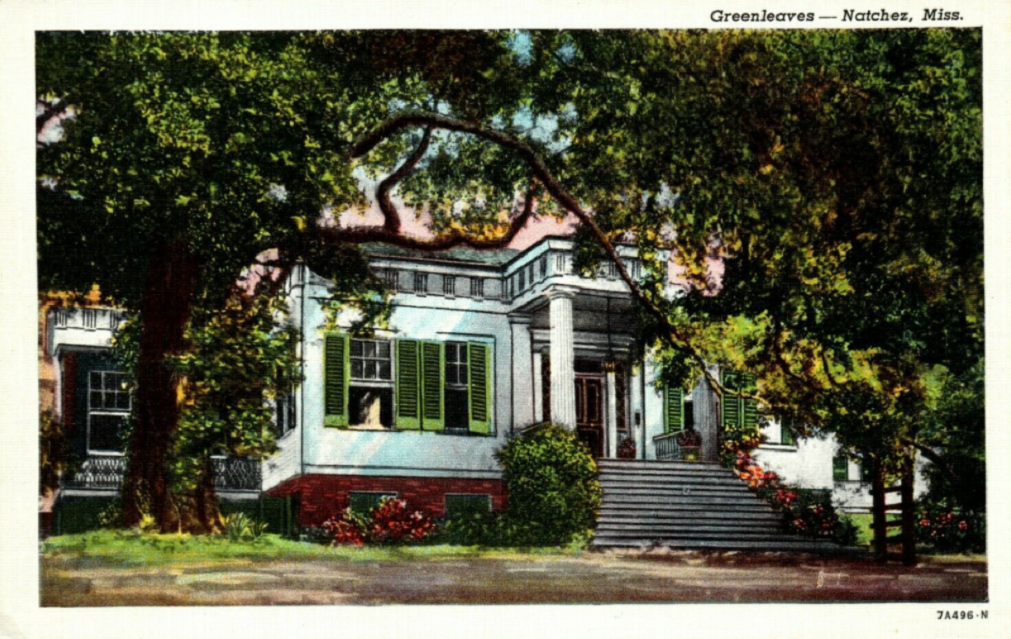 Greenleaves has gone by several names, but the Koontz House is by far the best known. It was completed in 1838 by a French lawyer and architect named E. P. Fourniquet. When Greenleaves was but eleven years old it was purchased by George Washington Koontz, a local banker. It has been owned by the same family since.

In addition to the house the property is well-known for its gardens and creative landscaping. One distinguishing feature is the 400 year old live oak tree that shades the backyard. It is commonly known by legend and tradition that the Natchez Indians used this land as a meeting space. 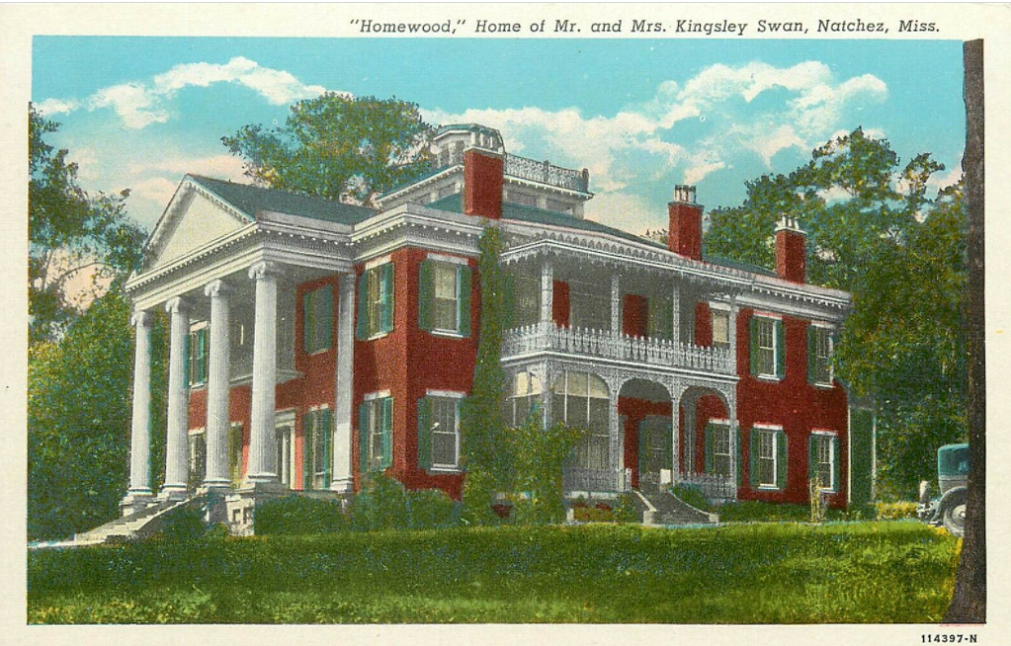 Homewood, located just north of Natchez, was a wedding present for the landowner’s daughter Catherine. She married William S. Balfour and together they had six children. Balfour was among the state’s richest planters and a prominent Mississippi politician. It was his wealth that financed the state college near Clinton, Mississippi.

Before the American Civil War, Catherine’s father, David Hunt used nearly all 600 acres of the plantation for cotton, but because the raw materials for brick making were abundant and there was money to be made, a plantation brickyard was created and enjoyed tremendous success.

When David Hunt commissioned Homewood it was an exception to the southern colonial mansion rulebook. It was a brick structure modeled after one of the finest houses in downtown Natchez – Stanton Hall. Similarities aside, Homewood was designed by the local architect James Hardie, who created several unusual features, including a solid mahogany fanned staircase.

The Balfours sold Homewood to William Kaiser in 1907. The Kaisers used the property for a dairy farm and often leased or donated the property for outside activities. One such was the filming in 1915 of D. W. Griffith’s movie Birth of a Nation.

Homewood changed hands for a third time in 1937. The new owner, a New York family named Swan, invested thousands in remodeling, but one night in 1940 the mansion burned to the ground. The fire was an event that caused quite a hullabaloo in that the owner ordered the fire company volunteers off her property. 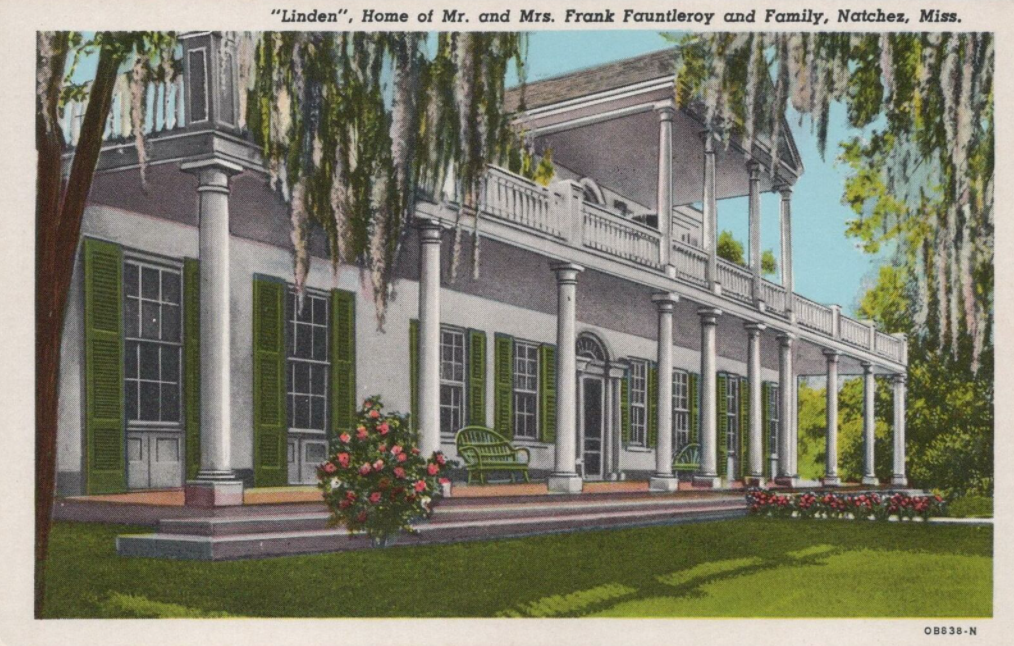 Located on a street named for the house, Linden, at 1 Linden Place is one of the oldest of the mansion style homes in Natchez.

However, thirty years after the first construction was completed it was redesigned and remodeled for Thomas “Buck” Reed, a short-termed Mississippi US senator. Later purchased by a doctor, John Ker, it was expanded by the addition of two wings and a gallery.

Dr. Ker died soon after the remodeling and the property devolved to one Jane Conner and her seven children. Conner added yet another wing and had the builders use bricks that were likely purchased from the Homewood Brick Company.

It was for a time (circa 1983) used as an exclusive hotel. Two rather interesting portraits decorate the gallery; one is that of the opera soprano Jenny Lind, the other is of the ornithologist John James Audubon. 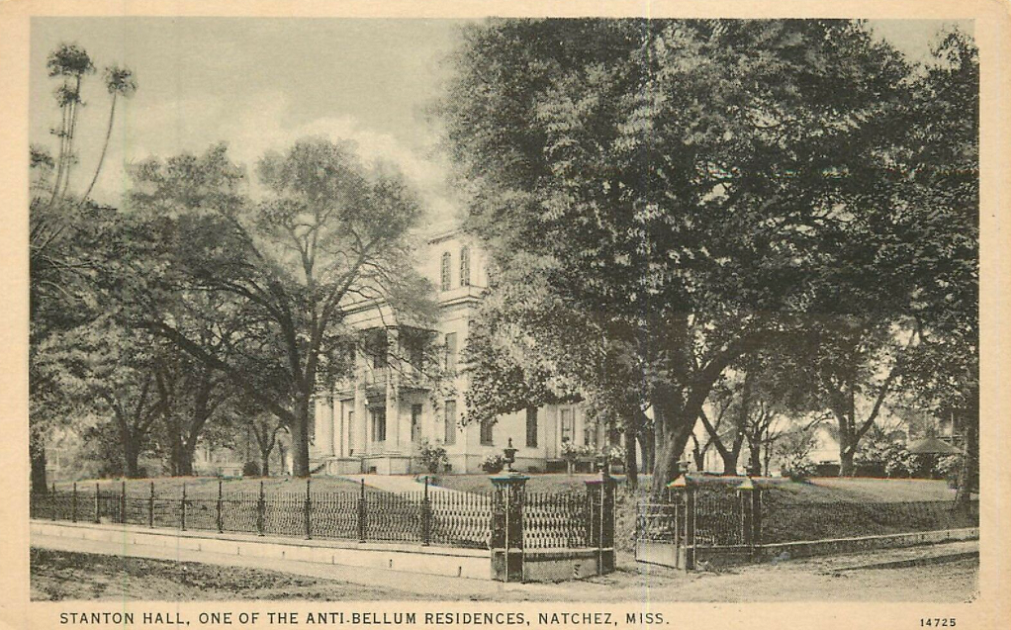 Built near the end of the 1850s, Stanton Hall is a mansion among the most lavish still to survive in the southeastern United States. Like other properties in Natchez, since 1940 it is a museum house owned and displayed by a local garden club.

The building of Stanton Hall nicknamed “Belfast,” was a six-year project on behalf of Frederick Stanton, a Mississippi cotton broker. The extended period of construction was due in part to the materials, most of which were rare, handcrafted, and expensive. One notable source in an Architectural Digest essay dictates that more than five thousand dollars was spent on doorknobs.

Stanton Hall, supposedly a copy of the owners Irish ancestral home, hence the name “Belfast” sits on a two-acre city block just north of the city-center. It is surrounded by an iron fence with gates designed for both foot- and vehicular-traffic. It is a brick, painted white, and plaster structure with a front entrance with four Corinthian columns. The main roof is hipped and carries a cupola.

The interior is even more elaborate then the exterior, with elements of Italian marble, stained glass, gilded mirrors, and bronze doorknobs and hinges.

Stanton lived for just a short time after construction finished. His heirs found it difficult to maintain and finance the house. They donated the home to an educational organization that thereafter established the Stanton College for Young Ladies.

Dr. Dancer is joining Postcard History as a pictorial tour guide. Nate has been collecting postcards for four decades and has amassed a vast collection and stores of knowledge on his favorite topic - public architecture. He recently became a pensioner. He and his wife live in north Scotland with their precious cat named Sage.
PrevPreviousNee!
NextShips of the Italian Line – the First, the Best, and the Last.Next
3 Comments
Oldest
Newest Most Voted
Inline Feedbacks
View all comments
Will Parkhurst

Thank you very much for a very interesting article, I visited Natchez in 2004 and looked around Longwood. Also saw Stanton Hall

“Very low-cost labor” is perhaps too euphemistic a description of slavery.