Here in the United States are two major celebrations of King Louis IX of France. There is a basilica in St. Louis, Missouri, and a cathedral in New Orleans, Louisiana. Both are magnificent structures and splendidly adorned. The object of this essay is the cathedral in New Orleans situated on the west edge of Jackson Square. More specifically we are interested in the story told by ten of the most colorful stained-glass windows in the United States. 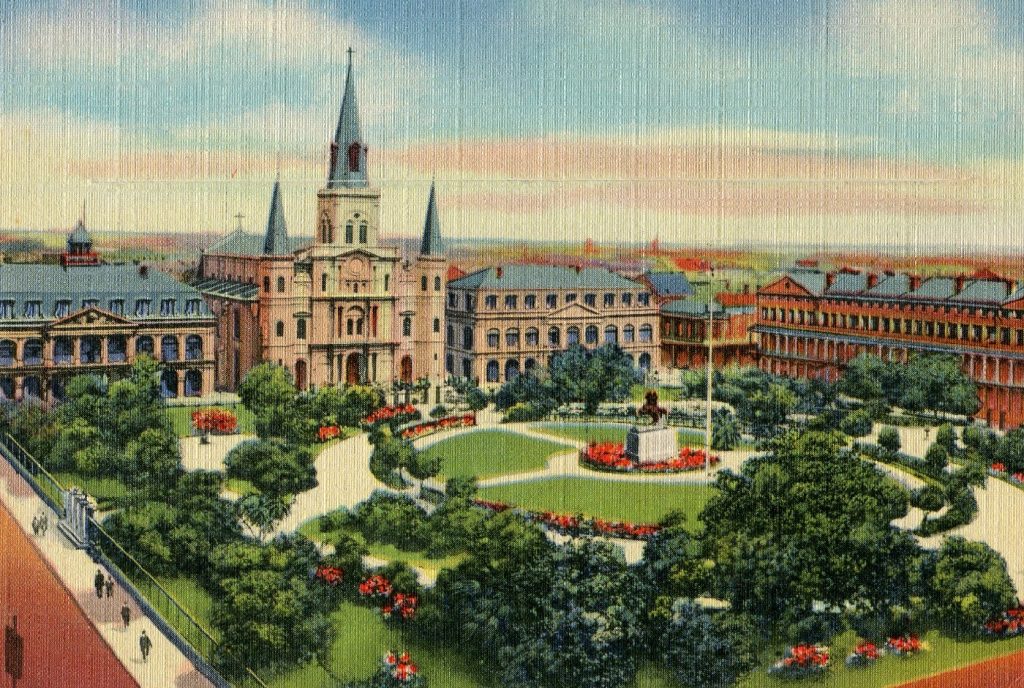 The story of the windows began nearly 100 years ago in a small village in Germany. There is little Internet information about Linnich, Germany and not a single mention of a stain-glass manufacturer with the name the Oidtaan Studio. I have discovered the name Oidtaan is of Finnish origin.

Today Linnich is part of the North Rhine-Westphalia German State. The population of the village exceeds 12,000 residents and many of those are earning their living from a company devoted to laminate packaging for the pharmaceutical industry. Curiously, however, Linnich is the home of the Deutsche Glasmalerei-Museum (a museum and learning center with a mission of teaching and understanding the art and practice of stained glass.)

The first visit I made to New Orleans was over 25 years ago. I was one of the lucky members of my class, I left school and walked across Manhattan in the early ‘90s and found work within a month. After just another month, I was asked to represent our organization at a convention of like-minded museum employees in New Orleans. I left two days early and found myself in a kind of Disney-setting. It went from pillar to post and then became a visit of wandering, seeing the sights, and enjoying the restaurants. But when you are in New Orleans in the middle of August there is one other thing you are forced to do – seek shelter from the heat of day. Such was the case of how I learned of the ten windows in the cathedral which tell the story of St. Louis, King of France.

Through the years since that visit, I have searched for a set of postcards dedicated to those ten windows but have met failure in every attempt except one. About twelve years ago at a postcard show in Illinois, I found a linen-folder entitled, St. Louis Cathedral, New Orleans, La. I have tired of the search; therefore, I hope you will forgive the use of the pages in this folder as illustrations.

To present at least a minimum of history, I called the Cathedral the other day and talked to a knowledgeable person who very kindly answered my questions. And, I thank her.

In just a few minutes I learned what I needed. The windows were made in Germany and shipped to Louisiana in the late 1920s. Upon arrival at New Orleans an art glass company that may very well have been owned and operated by a Jacob Julian Lips (and his son, J. J. Lips, Jr.), installed the windows at the church in 1929. (Apparently the Lips concern is still in business. There is a website for Julius Lips Glass in Gretna, Louisiana.)

Ellie McCrackin is a pen-name used by one of America's foremost archivists. Preferring to remain in the background, Ellie ghost writes for some of the leading world historians. She loves postcards and loves to write about the stories they tell.
PrevPreviousMystery Card #5
NextCome On PostcardsNext
4 Comments
Oldest
Newest Most Voted
Inline Feedbacks
View all comments
Graham

Thank you very much for your interesting article about the stainglass windows in St. Louis Cathedral
in New Orleans.I have been in the cathedral and found it a haven of peace and quiet in a very noisy city. Like you I also enjoy collecting postcards and have quite a lot of the city and cathedral

This interesting article brought back memories of several visits to St. Louis Cathedral over a 25-year period. I checked my collection and there are, in fact, at least two post cards of the windows. The two I have are chrome and appear to be published by the Cathedral itself: STLC-20 St. Louis Crowned King of France; and STLC-21 St. Louis receiving the keys of Damiette. Who knows–there may be a complete set of the windows? I have other cards, also numbered in this same series, depicting paintings in the Cathedral and one of a statue of St. Louis.

What a fascinating story! We love visiting NOLA and will most certainly stop in the next time we are there. The Mos Teutonicus procedure did sound rather gruesome however.

Since there are approximately 500 relics which are purported to be the Crown of Thorns, at least 499 of them are obviously fakes.