The New York Times reported on October 28, 1905, that three arrests had been made at a local stationery and novelty store by Anthony Comstock.

Comstock told the clerk that he wanted some postcards, “the best you’ve got.” She called her mother who produced three cards that met his requirements for the price of 80¢.  Comstock objected and the reply was, “Well, you see, since Anthony Comstock has been running around pinching pictures, the prices have gone up, especially for the good ones.”

At which point the husband arrived and recognized Comstock, and asked, “What are you doing here?” Comstock replied, “I have just called with warrants for your arrest along with your wife, and the young lady.”

Comstock founded the New York Society for the Suppression of Vice, popularly known as the “naughty picture squad” in 1873. That was the same year that Congress passed the “Suppression of Trade in, and Circulation of, Obscene Literature and Articles of Immoral Use,” which criminalized obscenity, contraceptives, abortifacients, sex toys, personal letters with any sexual content or information, and any information regarding them. Over time the laws were expanded to cover using the mails for distributing these and related items, including postcards. 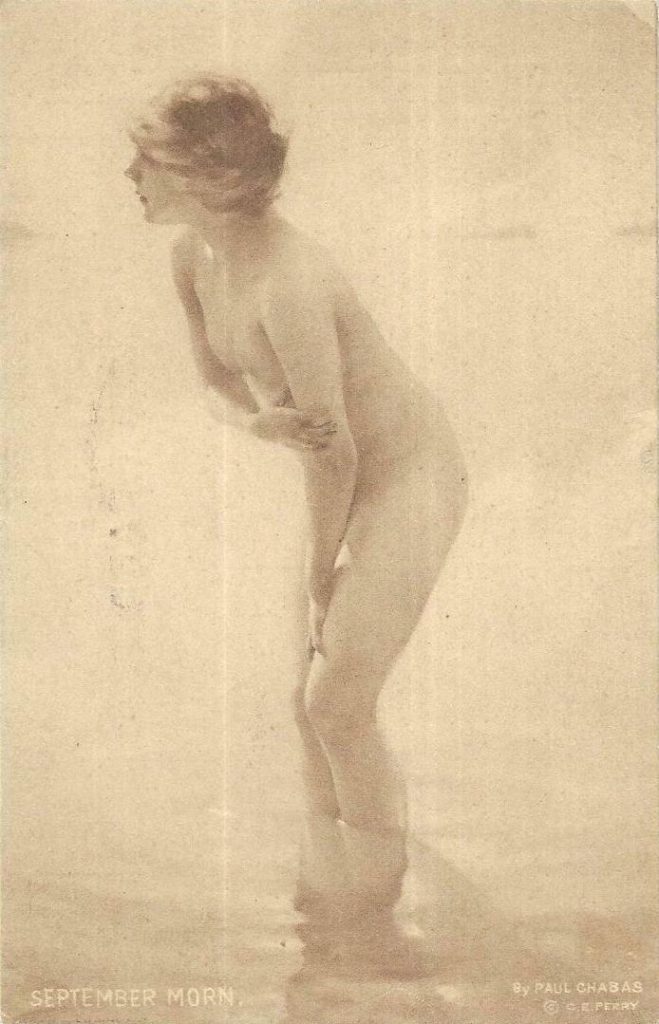 September Morn won First Prize at the Paris Salon of June 1912. The artist’s award was the medal of honor, the highest recognition a French artist may attain. The picture shows a blond figure posed in the waters of the sea off Brittany. In the morning of late summer days, the sea literally glows like a fire opal.

In 1913, Comstock’s vice squad banned the display of September Morn prints in art dealer’s windows. The case went to court, and as expected the ruling favored the art dealer, saying the picture was not obscene. The case not only caused a stir in the national press but made everybody want a copy of the picture. Postcard publishers were quick to jump on the bandwagon. Thousands of September Morn postcards were printed and were soon in circulation.

Comstock remained active in the vice squad until his death in 1915.

Although vestiges of the Comstock Act are still on the books, none of it is enforced. As a result there are risqué postcards and many have been mailed. The best was yet to come, the psychedelic postcards of the 1960s, which combined naughty and nice.

San Francisco’s counterculture spawned the era of multiband rock shows in such venues as the Avalon Ballroom, the Fillmore Auditorium (later Fillmore West), along with New York City’s Fillmore East.

Ornate hand drawn posters and promotional postcards, often miniatures of the posters, served as print announcements. Graham commissioned artists like Wes Wilson and others, so the cards qualify as artist signed. Most of the designs were psychedelic and some were borderline risqué by including the unclad female form. Because these could pass thru the mail, they must have been considered “tame” by Post Office standards of the era.

Graham printed posters, blotters, postcards, and handbills (which appear like the cards but are thinner or wider than a postcard and have blank backs) to advertise concerts. The postcards were produced with several different back types, such as “place stamp here,” advertising backs, blank backs, and bulk rate permit backs.

Ad backs and bulk rate backs were used to advertise shows. They are harder to find than the “place stamp here” backs, which were used for retail marketing. (That is why the card above is mailed a year after the concert as it was bought as a souvenir after the show.) Card sizes vary but 4½ x 8 inches is most frequent, and some are double cards in both a horizontal and vertical format. Be sure when purchasing a card that it is not an orphaned half of a double sized card. 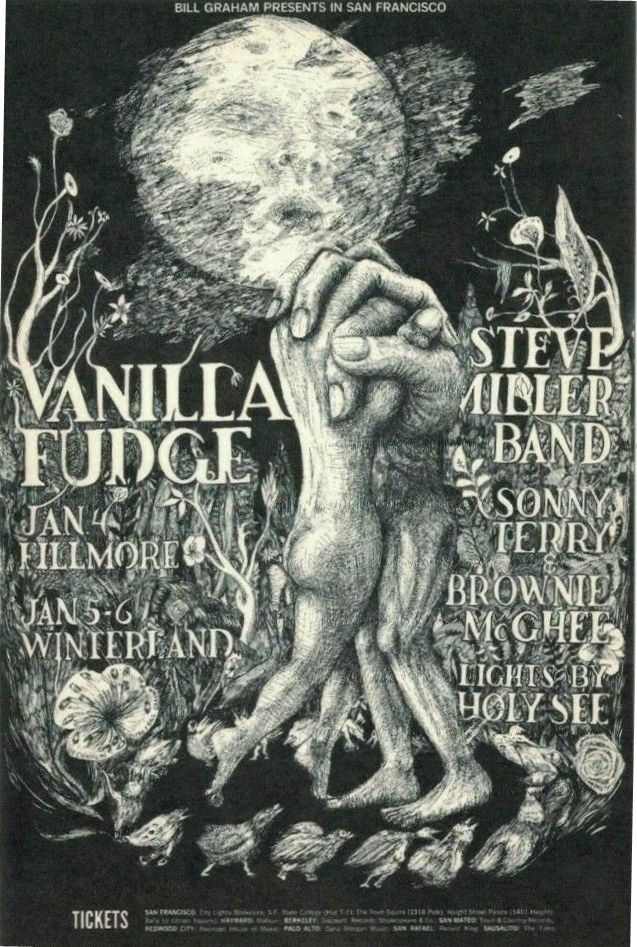 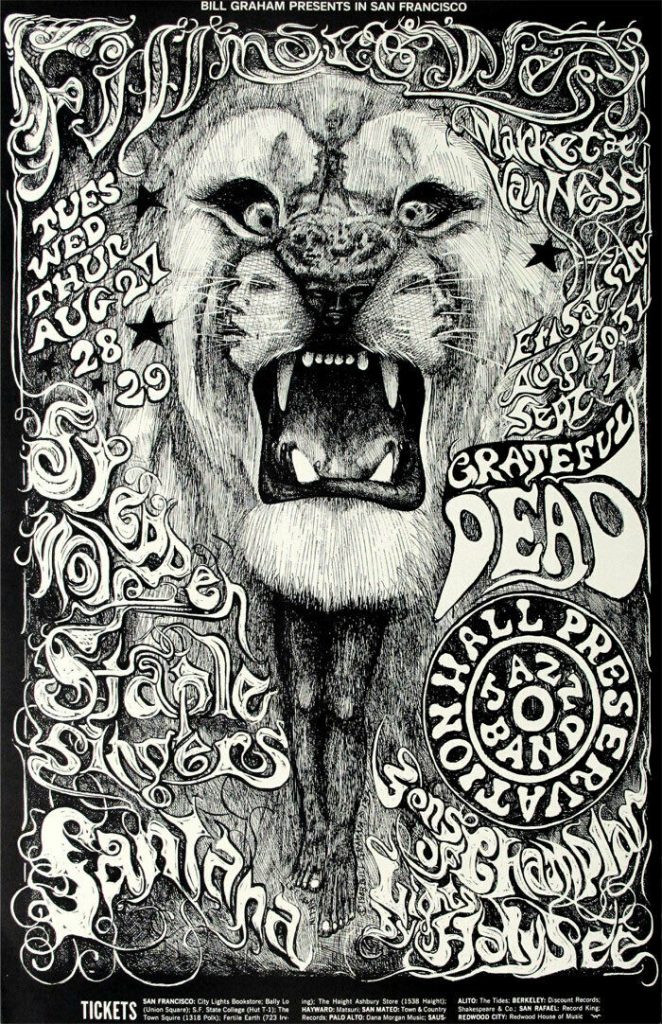 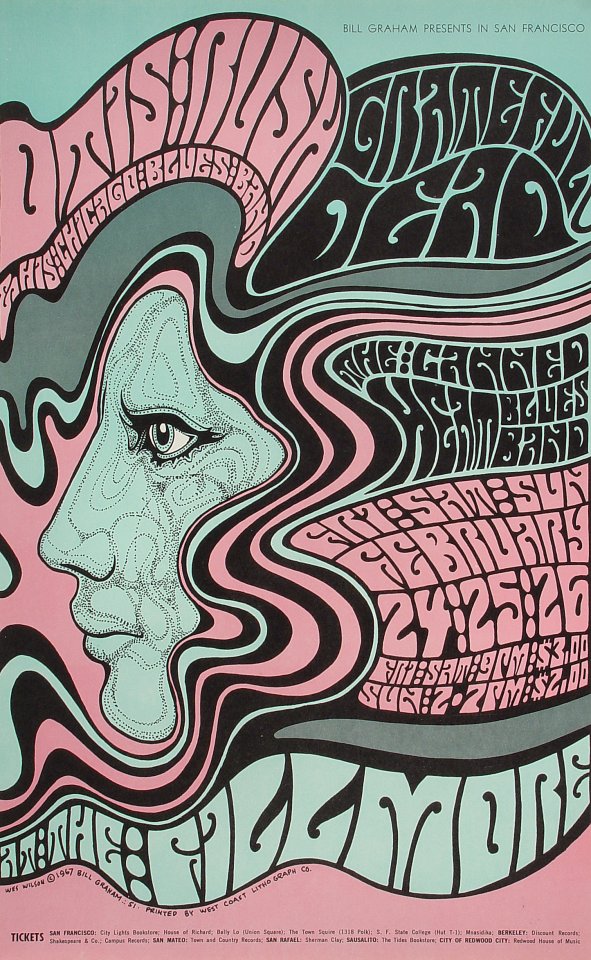 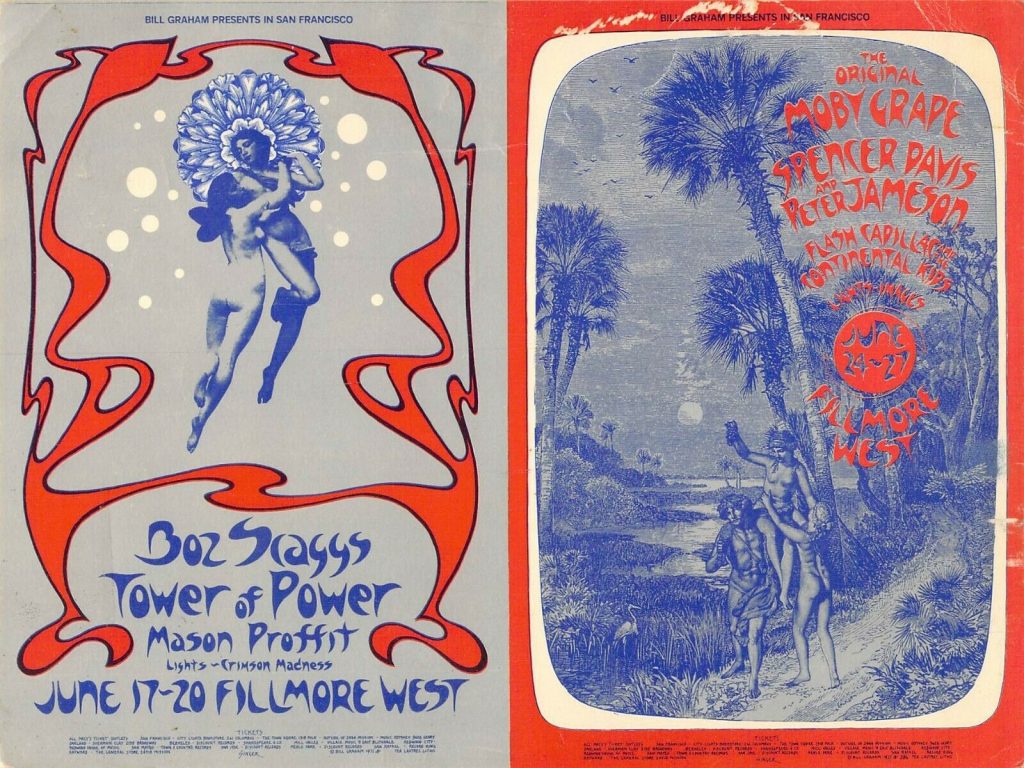 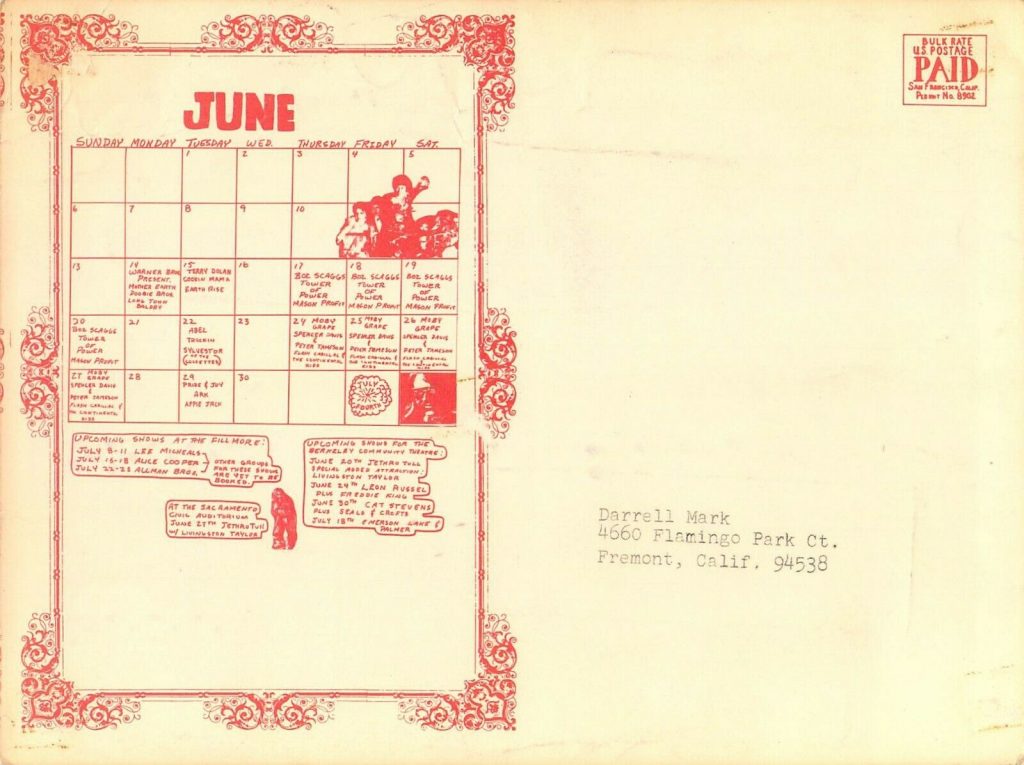 The card above is a double handbill postcard advertising the concerts of Boz Skaggs and Moby Grape.

It is estimated that 250 different postcards exist promoting Fillmore concerts from 1966 through 1972. The first printing was done prior to the concert with the standard back and the bulk rate indicia. Second and third printings were done after the concert and were sold as souvenirs along with reprints of the show posters. There is even a fourth printing by at least one of the artists in the late 1980s. Reprints as late as the 1990s are also known, sometimes, sold and signed in ink by the original artist.

Knowledgeable experts and dealers can sort out the differences by examining the cards. Those mailed before the concert date are most desirable. When shopping online, look at the back of the card, as some are not postcards because the backs are blank or have advertising material. Since the designs are so appealing this may not matter.

Collectors can find these and many other cards from the Fillmore on auction sites and dealer websites.  They are historic but be sure you know what you are buying; they are not cheap. Key search words like “Bill Graham postcards” or “Fillmore postcards” work well.

The images below are from the only postcard I have of a Filmore card mailed with a postage stamp. These are scarce and were postproduction cards sold as keepsakes not as advertising. It is postally used by “Larry” and provides a unique historical viewpoint. 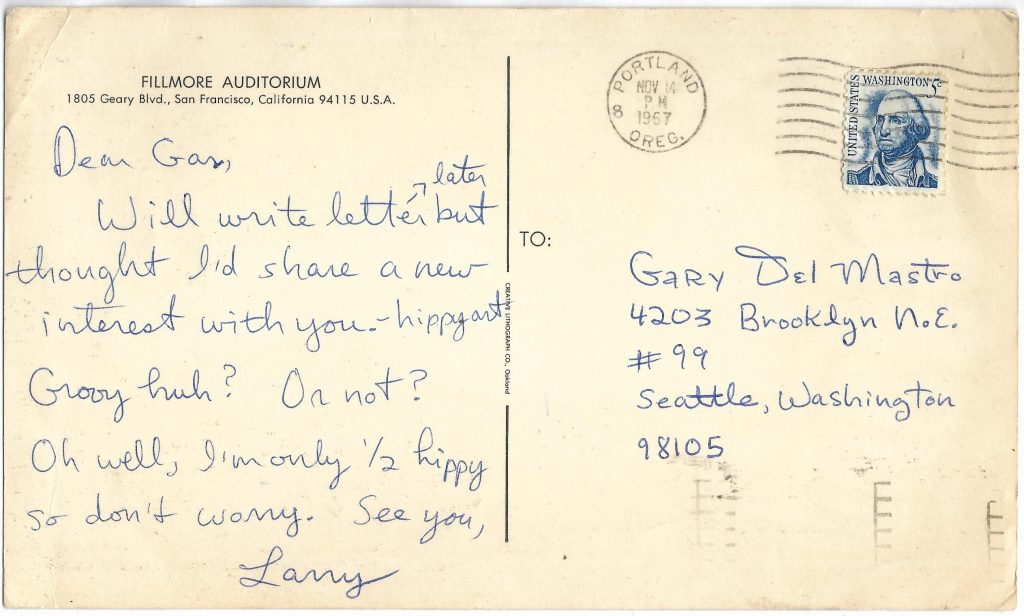 Postcard advertising Jefferson Airplane and Muddy Waters concert for late September 1966 at the Fillmore Auditorium. The message is contemporary, and the card was mailed November 1967.

Fillmore cards with cancellations are rare even after the concert date.

This card measures 4⅞ x 8¼ inches and is considered one of the best examples of Wes Wilson’s work.

The message is “Dear Gar, Will write letter later but thought I’d share a new interest with you – hippy art. Groovy huh? Or not? Oh well, I’m only ½ hippy so don’t worry. See you, Larry.” 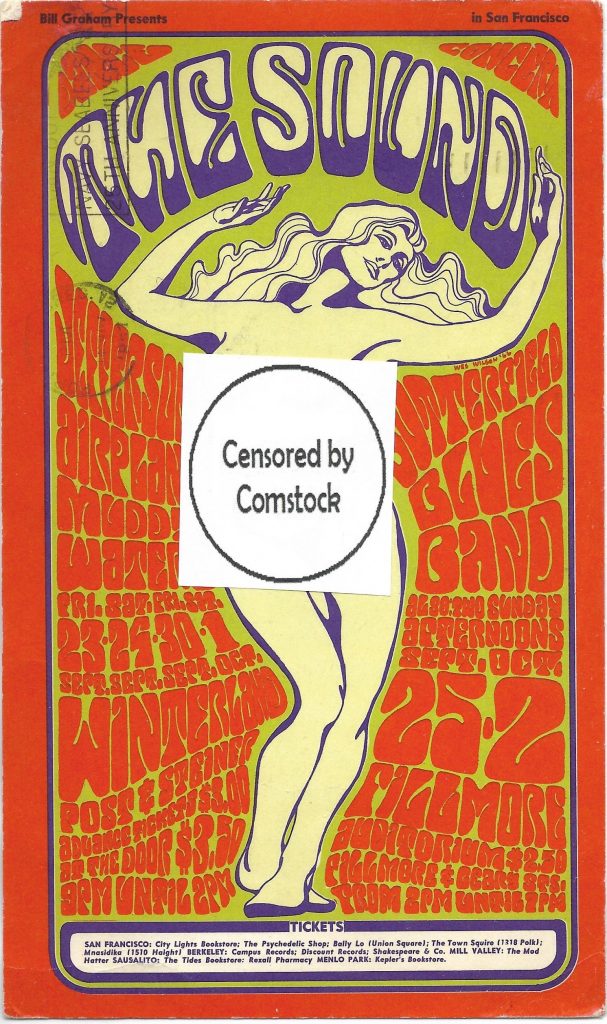 * Modified by the author.

Bob Toal is an avid collector of postcard postal history targeting the birth and development of US postcards from their early beginnings to present. This includes early pioneer and private mailing cards as well as view folders, bi and tri-fold postcards, jumbo postcards and anything unusual in the postcard realm.
PrevPreviousPortrait of an American City – Asheville, North Carolina
NextYou are What You Eat: A Look at Mid-Century Restaurant and Food Advertising PostcardsNext
5 Comments
Oldest
Newest Most Voted
Inline Feedbacks
View all comments
Bobippie

Ive always understood that many of the risque cards of the early 1900’s were collected as gentlemens cards. They were unable to mail but collected and discreetly showed them to other men at gatherings and clubs. It was the thing to do then.

The art is incredible and brings to mind the culture of the 60’s and 70’s.

The Art Of Rock covers 516 pages of visual and oral history. This 11″ x 13″ hardcover was released in 1987 and was an exhaustive effort by Paul Grushkin. Poster coverage is expansive. Art Of The Fillmore, published two years later, has 240 pages which spotlights the entire run of the Graham organization ‘art’ history. Both are impressive. At the Marin Flea Market (San Rafael, CA) in the mid-’70s, you were stoked when vendors had telephone pole used examples. When removed the nail holes ripped the bill. None-the-less, we felt this led to more authentic collectability because it was the… Read more »

Comstock lived long enough to attract the attention of a young J. Edgar Hoover, whose tenure as director of the Federal Bureau of Investigation bore the stamp of some of Anthony’s methodology.