You are What You Eat:

A Look at Mid-Century Restaurant
and Food Advertising Postcards

A recent social media posting called “Eating in the Fifties” captured the beliefs and attitudes about foods at the time:

These attitudes are reflected in the imagery featured on postcards published to advertise restaurant meals and specialty foods in the mid-20th century. The idea that foods high in cholesterol should be avoided to protect heart health was not yet on people’s radar.

During this time, middle-aged men died like flies from heart attacks. Until the 1970s and ‘80s most Americans weren’t aware that many foods transform into cholesterol in the body. This fatty substance is the culprit for clogged arteries that constrict blood flow to the heart. Cholesterol-controlling medications such as statins that are so widely used today did not receive FDA approval until 1986.

Enormous Portions
Whether steaks, cakes, or shakes are featured alone or as part of the meal, the portion sizes shown on these restaurant postcards are huge. Large portions signify affluence, indulgence, and hospitality.

Consuming large portions during the mid-century era may also have been a reaction to food scarcity during the Great Depression in the1930s and later into the1940s during World War II. Abundance on the plate is the opposite of scarcity and therefore is experienced by consumers as both satisfying, indulgent, and rewarding. On another level, food abundance signifies hospitality across many cultures, including our own. By presenting large portion meals on their advertising postcards, restaurateurs sought to communicate their hospitality and generosity.

Isabel’s Famous Prime Ribs offers the diner a juicy slice of prime rib with a generous chunk of fat in the middle of the steak. Also prominently featured is an Old-Fashioned cocktail, presumably to enjoy before the meal, a glass of red wine, and a cigarette and a matchbook on the side of the steak platter. This imagery reminds us how lifestyles and attitudes about food, drink, and smoking have changed over the course of the past sixty years! 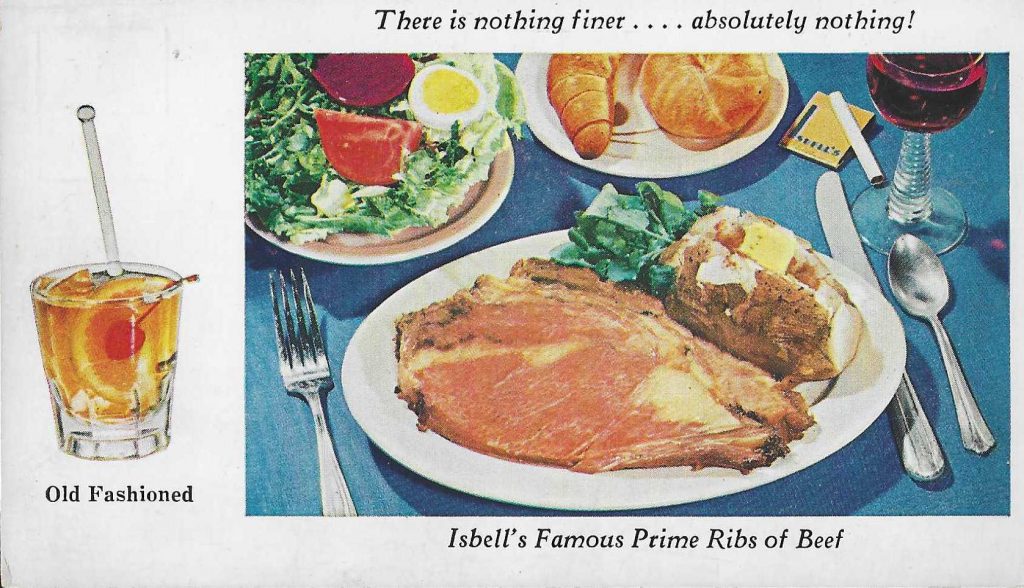 Home on the Range
The image of cowboys herding beef cattle that roam freely on lush grasslands taps into the essence of American’s imagination about cowboys and beef. The cowboys are strong, self-confident full of vitality, and are actively managing the herd on horseback. The cows look healthy and well-fed and will soon be ready to satisfy the tastes of beef-loving Americans.

This beef cows out-on-the-range imagery remains as compelling today as it was in the previous century. The marketing of organic, “free-range, grass-fed” beef, resonates with consumer imaginations of happy and healthy cows chomping on grass in open fields.

A print overlay on the front of this card states, “K.C. Where the Steak is Born.” This phrase seeks to brand Kansas City as the source for fine steaks. The three, nicely marbled steaks in the center of the postcard reinforce this image. The picture of the cattle in open fields subliminally links to the image of the three premium steaks – well-fed cows result in delicious steaks. 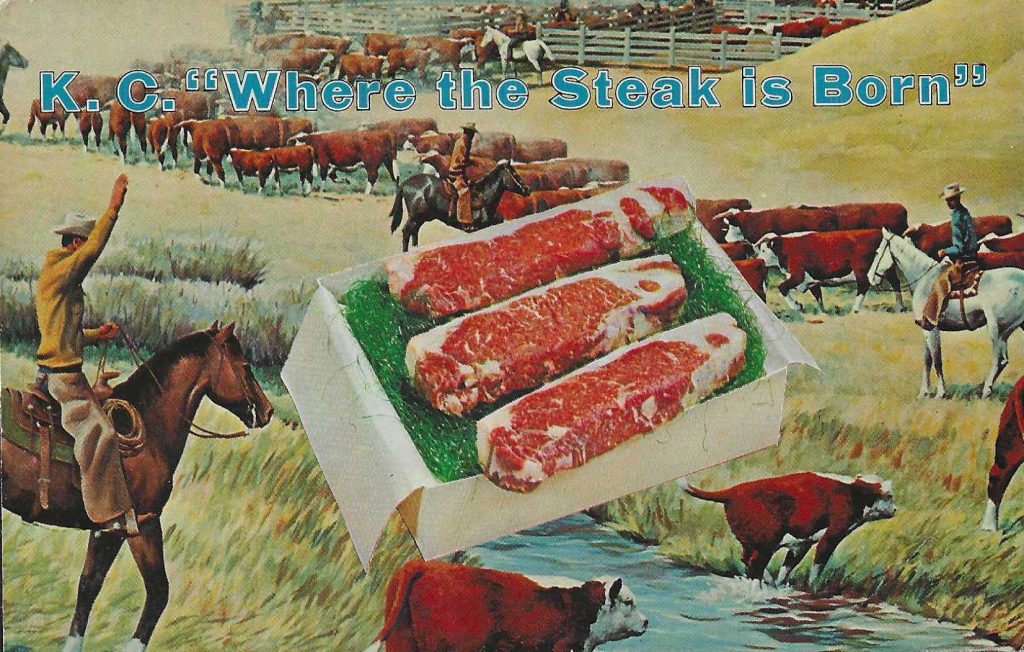 Freedom from Food Taboos
During the 20th century, unlike today, there were no dietary taboos about fried foods, sugar, salt, carbohydrates, or high calorie desserts.

Notice the generous portion of fried onions that accompanies the steaks on this restaurant advertising card. The meal includes strawberry shortcake for dessert. The only vegetables on the plate are two sprigs of parsley used as a garnish. 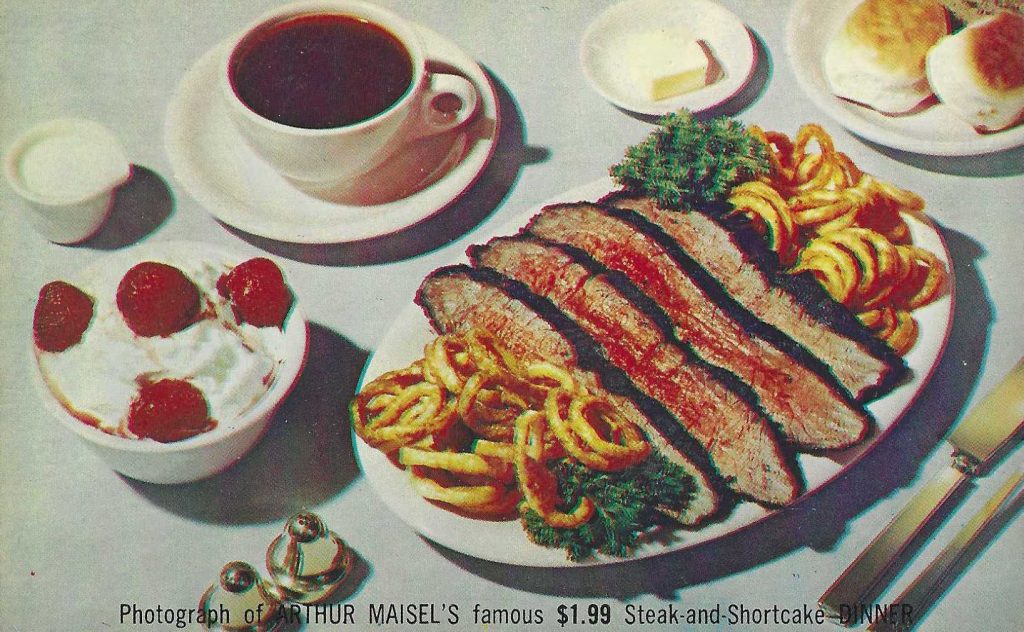 Restaurant Meals as Economical
Thornhill Cafeteria in Houston, Texas promises that “Eating a hearty meal out is cheaper than eating at home.” The intent here seems to be to give budget-conscious customers a reason to eat out.

Among my collection of food advertising postcards, this is one of the few restaurant dinners that include green vegetables and salad with the entree. If three pieces of fried chicken and mashed potatoes, along with buns and butter leaves any room in your stomach, there is a giant slice of cherry pie to top off the meal. No doubt, the restaurateur wanted to communicate that all this food in one meal offers great value for the money. 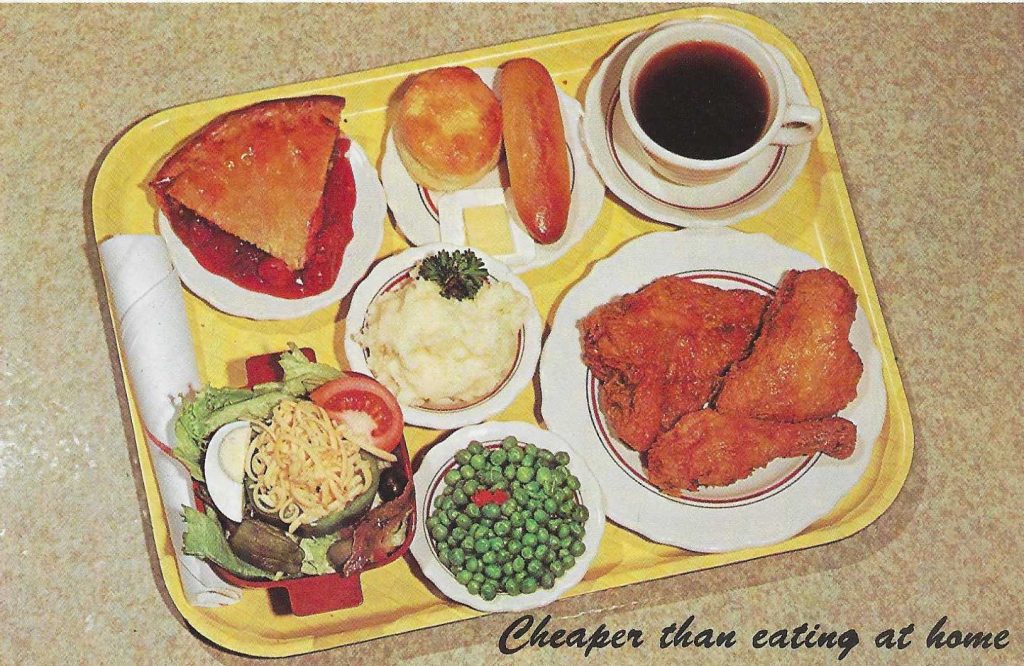 In the mood for and informal meal? Indulge in a pizza burger for just 35¢. The price tag describes the pizza burger as “A tasty treat that you’ll like to eat.” To wash down the pizza burger, enjoy a huge strawberry ice-cream soda topped off with whip cream. 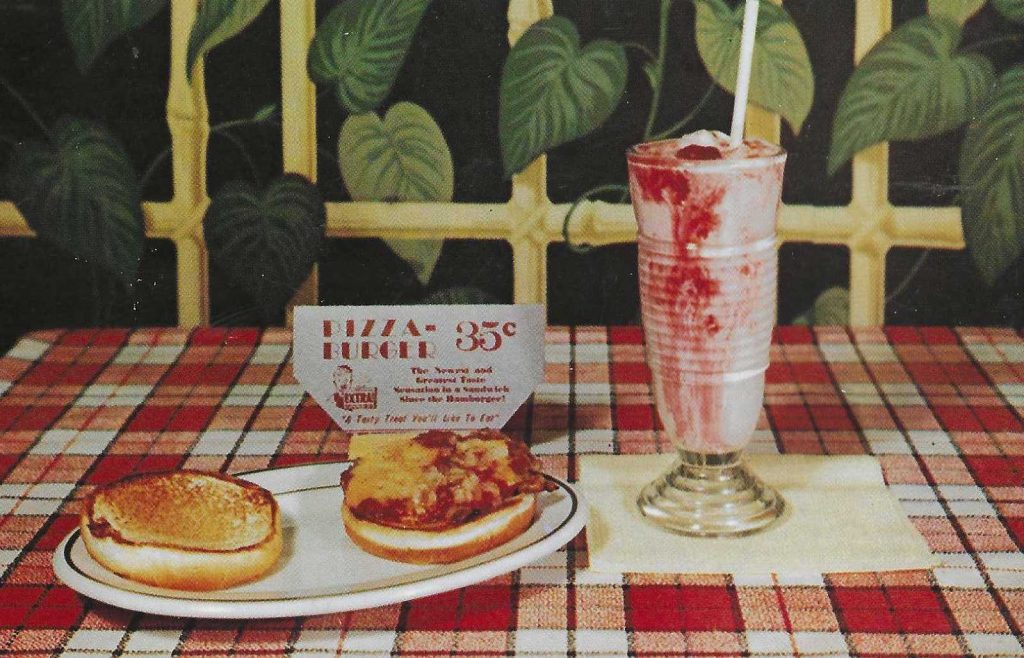 Desserts
Desserts wouldn’t be desserts if they didn’t offer an experience of indulgence. Today, we consider ordering a rich dessert at a restaurant to be a “guilty pleasure.”  Back in the day, rich, cream-laden desserts didn’t elicit feelings of guilt, only pleasure came from such items as ice-cream floats, malteds, ice-cream sundaes, pies, and cakes.

Swifts Ice Cream promotes itself with the presentation of a double scoop sundae, laden with chocolate and strawberry syrup and topped with maraschino cherries. 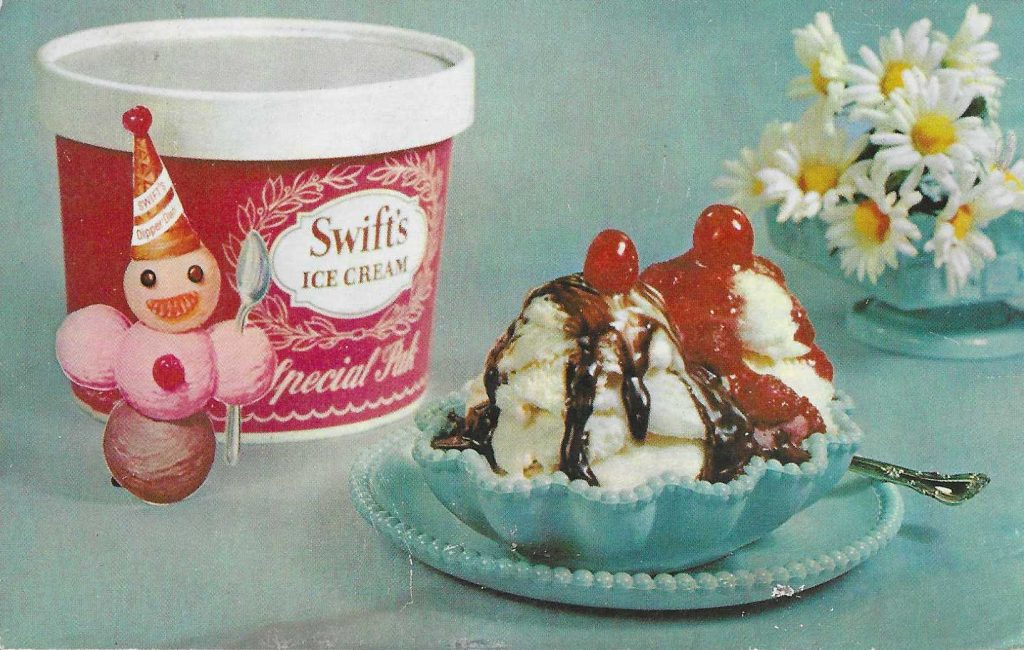 Pumpernniks is a well-loved New York-style delicatessen. The restaurant has been in business for over 40 years and was still thriving pre-Covid. Rather than featuring deli sandwiches on their advertising postcard, the owners put the focus on two desserts – a sumptuous cheesecake and what looks like a chocolate mousse cake. 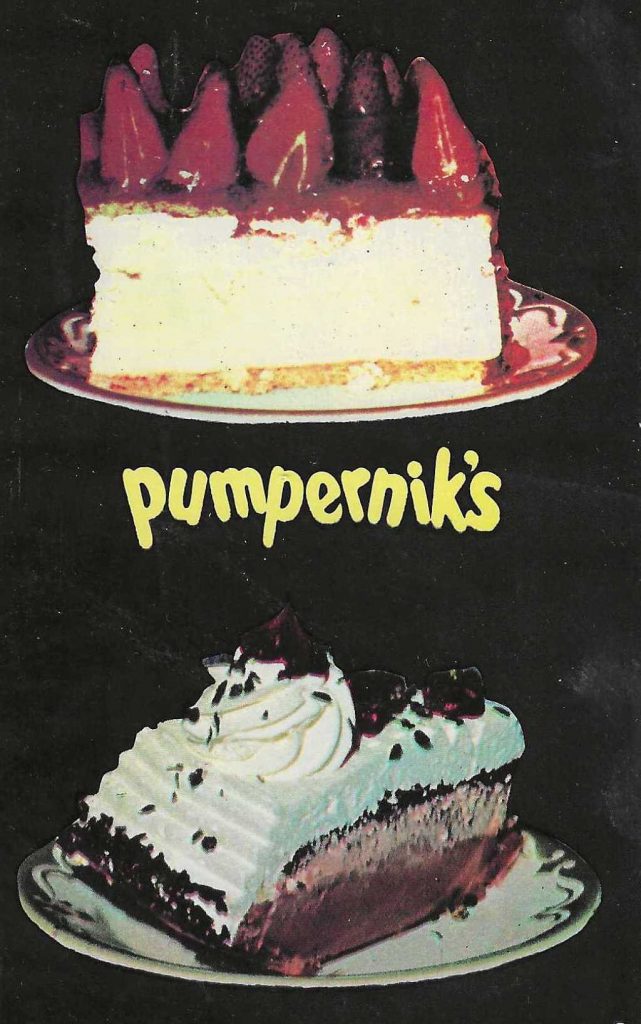 Pie Recipes
Postcards featuring recipes for America’s favorite pies including pecan pie, orange pie, key lime pie and pumpkin pie were popular collectibles.  Publishing pie recipes on postcards assumed that many homemakers would be happy to bake a pie for the family rather than spend money at a bakery to buy one.

The pecan pie recipe calls for nothing less than “a half a box of brown sugar.” This quantity is likely to be about a half-pound of sugar since brown sugar was sold and continues to be sold in 16 ounce boxes. 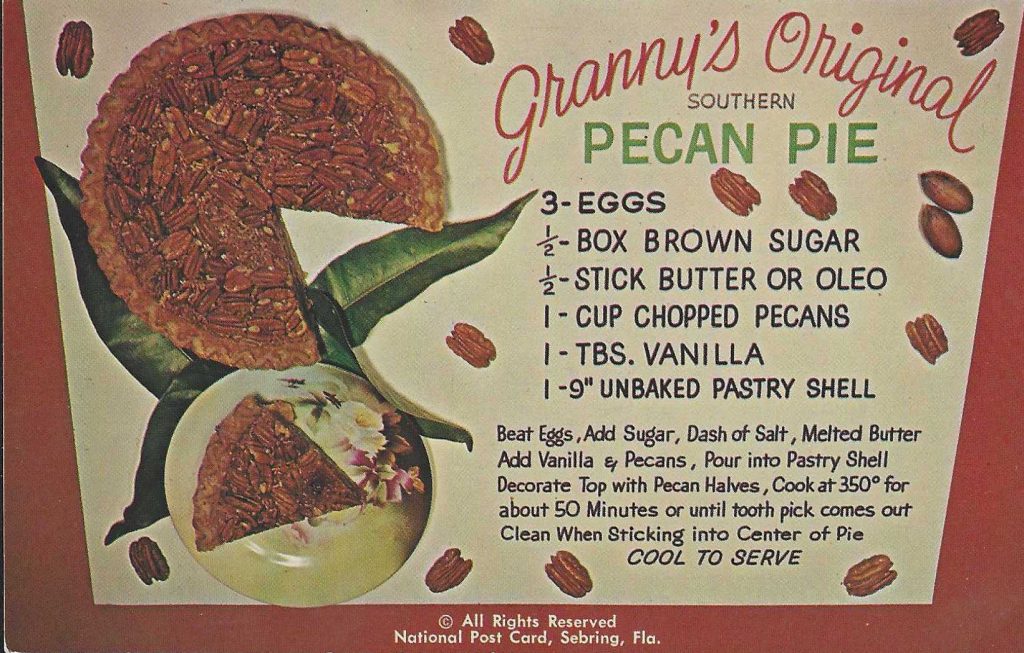 Emerging Ethnic Restaurants
Today, ethnic restaurants abound across most American cities. They reflect the vast number of countries represented by the immigrants who have settled here in the past 50 years. As of 2015, the United Nations reports that the US had 48 million foreign-born citizens, representing 15% of our total population. During the 1950s and ‘60s, however, the US population was much more homogenous. In 1960, for example, immigrant share of the population was only 5.4% or 9.7 million foreign-born.

At mid-century, adventurous restaurant eating for mainstream Americans might have meant a lasagna meal at a neighborhood Italian restaurant or an order of chop suey at a local Chinese take-out. Perhaps thinking that mainstream Americans have had little or no experience eating Chinese food, a restaurant called Chinese Kitchen beckons with a sign in its window, “Try Us.” 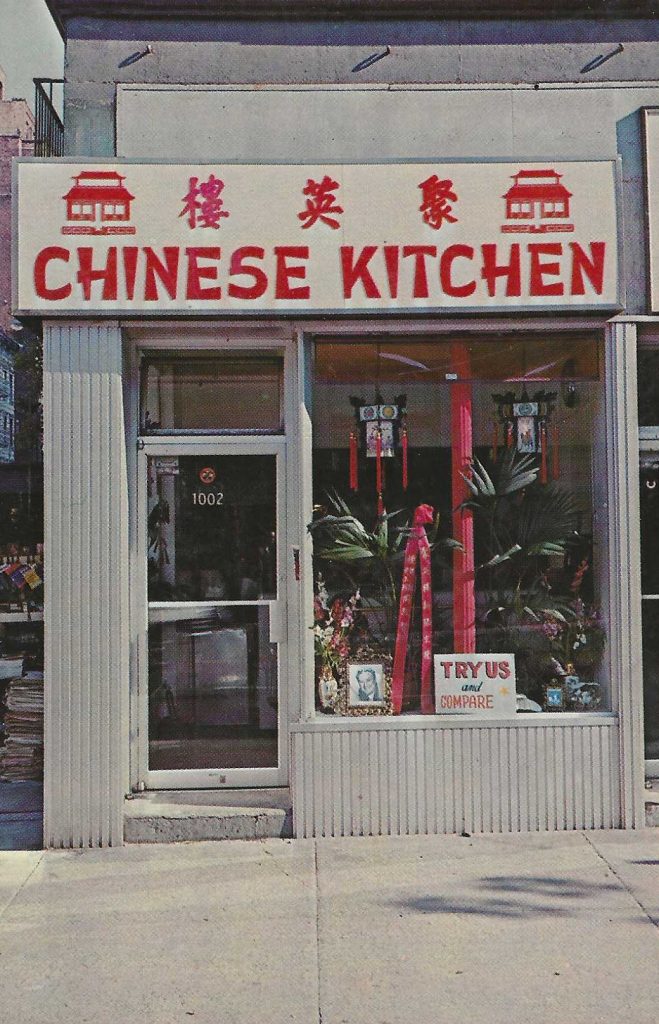 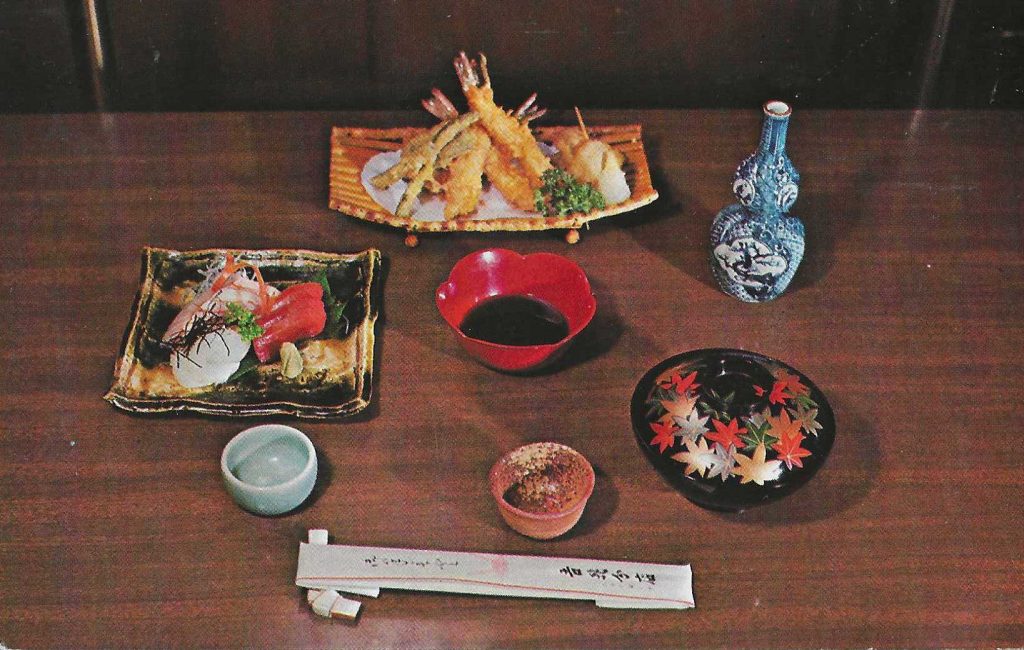 Bold foodies and those with roots in the Balkans might be attracted to try a seven-course traditional Armenian shish kabob meal with all the trimmings at a restaurant located in New York City. The restaurant does not seem to have a name other than Nationally Famous Balkan Armenian Restaurant. On the reverse side and for the benefit of potential diners who are not familiar with shish kabob, the restaurant owners provide a detailed description of the ingredients. 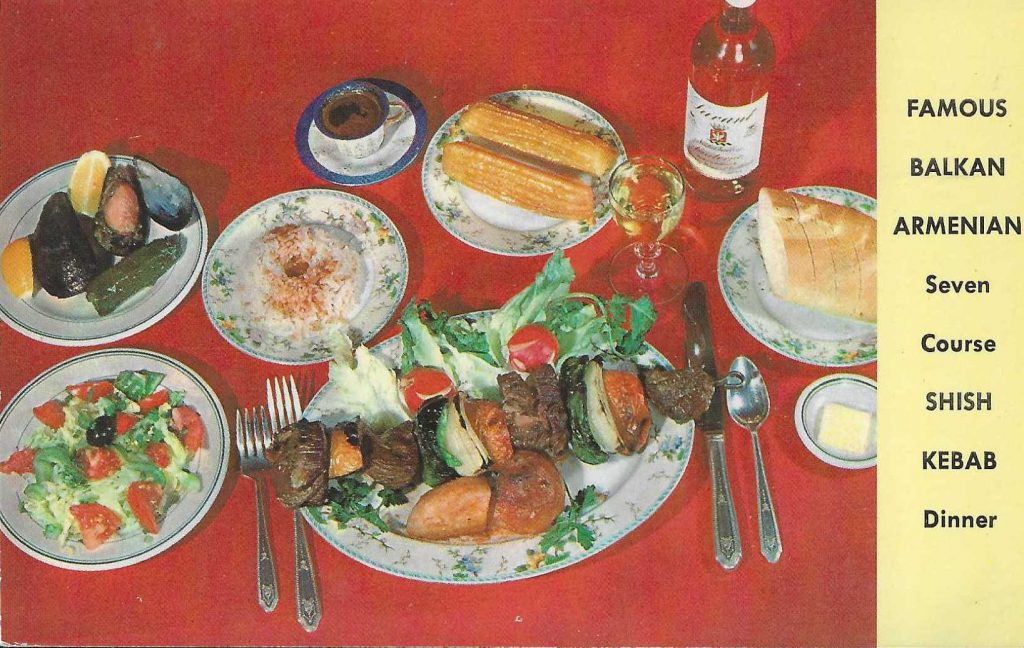 The Emergence of Convenience Foods
My grandmother made all family meals, cakes, pies and puddings from scratch. The only convenience foods that my mother used during the1950s and 1960s were cake mixes and instant puddings. We all knew those products where all the cook had to do was add milk and beat for two minutes, no cooking needed.

Advertising postcards featuring pre-made crab cakes and shrimp cocktail signal the emergence of packaged convenience foods. The popularity of prepared foods swelled as women entered or returned to the workforce and had less time to cook the family’s meals from scratch. Today, supermarkets devote entire aisles as well as refrigerator and freezer cases filled with prepared entrees which offer “heat and serve” convenience ranging from frozen slider hamburgers, lasagna, all kinds of pasta dishes, to meat, chicken and fish entrees and pizza. 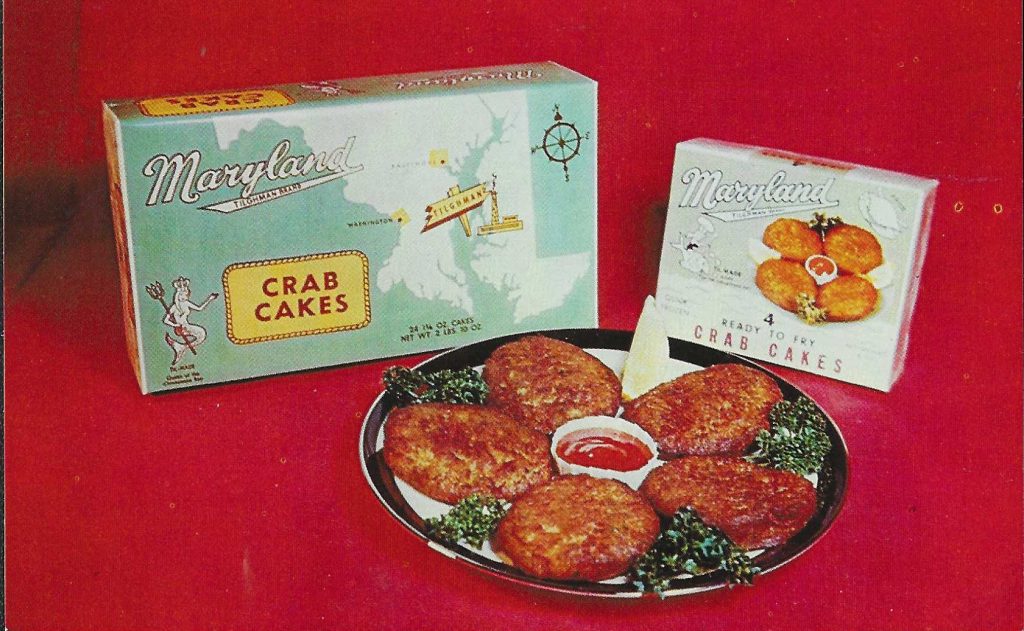 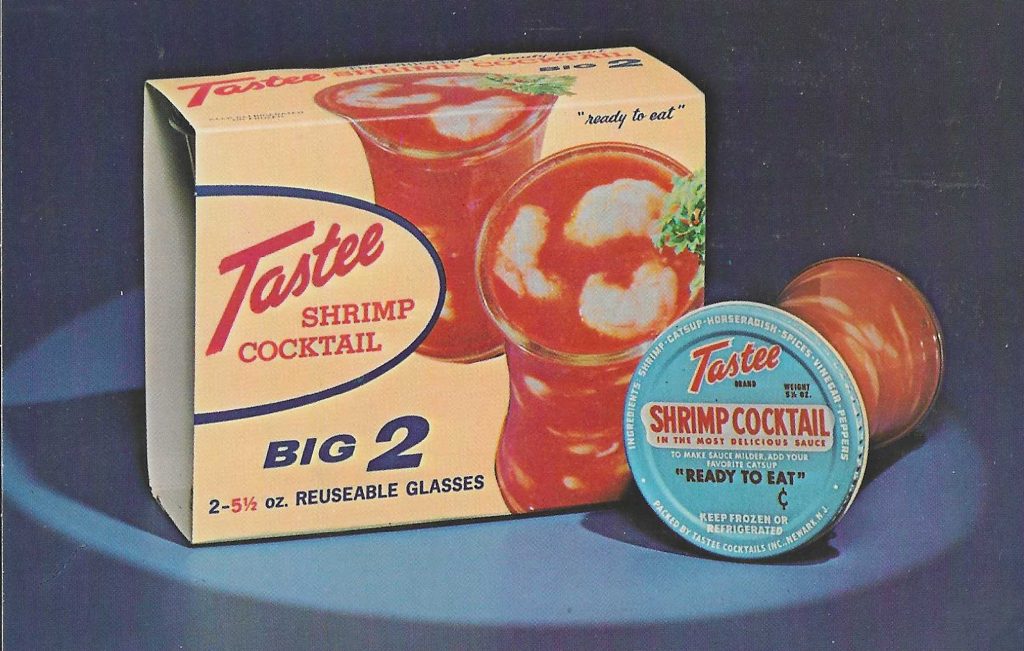 The Rise of Snack Foods
In past eras, most families ate three meals around the kitchen table, with little eating between meals. In fact, eating between meals was thought to ruin an appetite for dinner. However, as televisions became more affordable and popular, new eating habits centered around snacking and eating dinner in the living room while watching TV. Snack foods were positioned as convenience foods that could be eaten any time of day. However, the range of snack foods was quite limited in the ‘50s and ‘60s.  Weisel’s advertising card of German-style sausages, liverwurst or braunschweiger present these meats as TV snacks. Other snack food may have included crackers and cheese, pickles and olives, celery sticks with cream cheese. In contrast to today, packaged snacks were scarce and expensive. 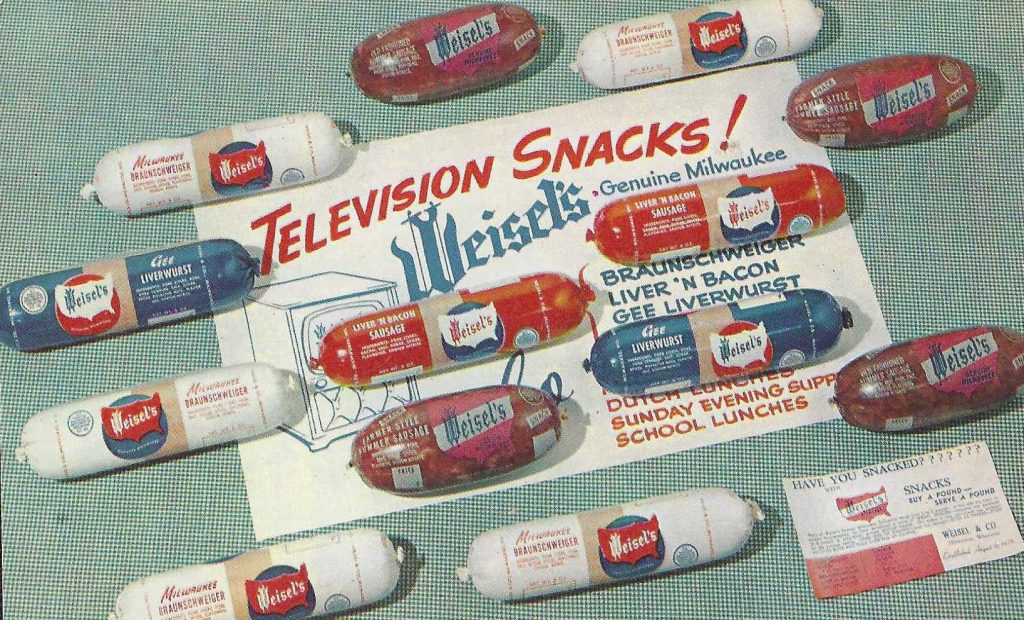 During the past 20 years, snacking has become totally embedded in American culture. Today in American supermarket aisles the snack foods number in the thousands of products and generates billions in sales annually. 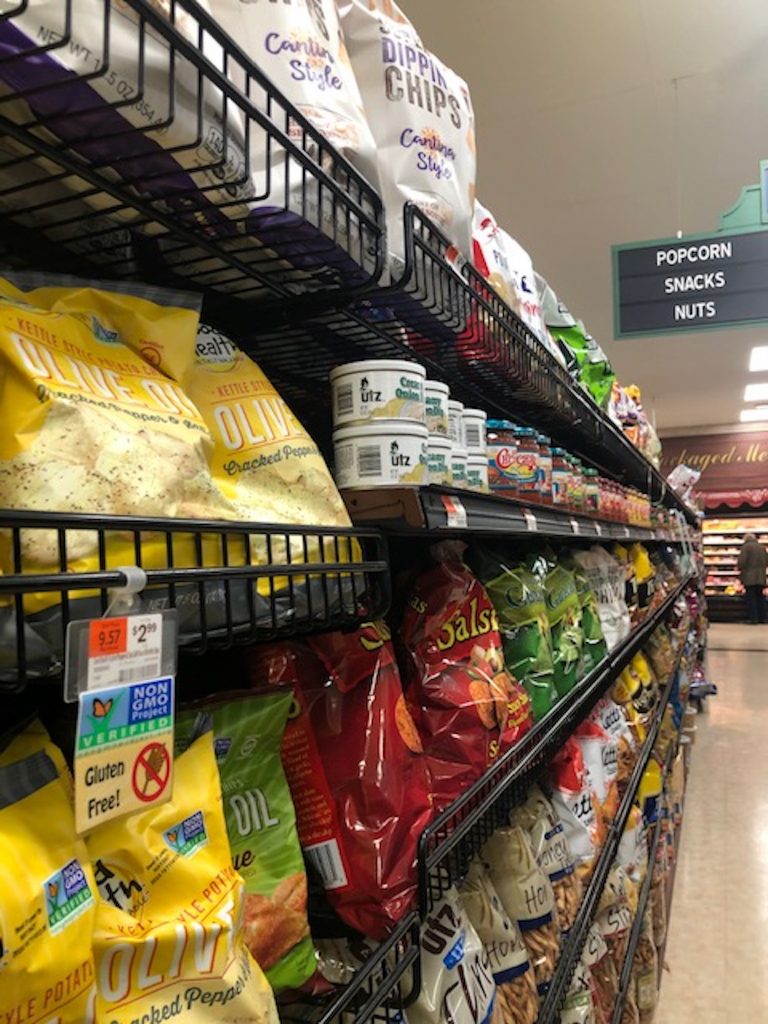 Nevertheless, despite increased awareness about healthy eating, the CDC reports that for 2018-19, 42.4% of Americans are obese whereas in 1960-62 it was only 13.3%. Obesity is defined by a body mass index (BMI) of 30 or higher. Since we strive to eat healthier today than we did 50 or 60 years ago, what accounts for this alarming obesity spike?

Sharon Wolf has been an avid collector of mid-century advertising postcards for 20 years. While living in San Francisco and New York, Sharon has acquired many advertising cards that she has sorted into categories such as room-by-room home furnishings, women’s, men’s and children’s fashions, foods, autos, business and industrial equipment, transportation and more.
PrevPreviousAnthony Comstock, September Morn, and the Fillmore
NextJames Buchanan at Home in Pennsylvania and the rankings of presidents of the United StatesNext
6 Comments
Oldest
Newest Most Voted
Inline Feedbacks
View all comments
Susan Lane

Open-my-eyes kind of article. Thanks for the lesson … and the memories.

Good to know you appreciated the “You Are What You Eat” article. Thanks for your comment!

You are what you eat… I can’t hear or read that statement without recalling that famous dialogue from the opening of the TV show, The Odd Couple. Felix gives Oscar a lecture of nutrition. Felix ends by saying, “you are what you eat”. Oscar replies with “Okay, what’s for dinner?”. Felix says “rump roast”. I always found that funny. That said, I enjoyed the trip through our food history. I always remember boxed pasta. But that only came along in the 40’s. Back then, cooking for a family (three meals) took all day. It is amazing just how far we… Read more »

Carbonated memories from the mid-’60s are from a family (50+ attending) 4th of July backyard picnic. As youngsters and being allowed to drink Pepsi with the B-B-Q meal was unreal. This was never allowed in daily life. My cousins still bring this up during our uncommon visits. Little did we know how caffeine and calorie consumptions would morph into the Big Gulp marketing culture.

The name of the shish kebab place was Balkan Armenian Restaurant. Balkan might have been the family name, since Armenia is in the Caucasus Mountains and is not one of the Balkan Peninsula states.