Tragedy of Being Forgotten

Historians, genealogists, and other researchers deal in whole or in-part with the events in the lives of people. The five golden events for everyone are birth, marriage and children, career, death and burial, and legacy. To get a fuller picture of anyone, the genealogist wishes to find at least snippets concerning these events in a person’s life. Sadly, the necessary records are not always available or do not exist, but the worst disappointment is when the discovery comes that the subject in question is buried without a memorial headstone or grave marker.

There is a common misconception that unmarked graves are for the poor, indigent, or unloved. Emphatically, this really is a misconception. The postcard artist Ruth Perkins (nee: Appleton) Safford and her husband Laurance Frye Safford are examples.

Mrs. Safford’s cards are colorful and factually accurate paintings of several sites on the National Register of Historic Places. In 1966, the National Park Service was authorized by the National Historic Preservation Act to create an official list of the nation’s historic places worthy of preservation. Some of the historic sites Mrs. Safford chose to paint are the United States Naval Academy, the Kenmore Estate (the home of Betty Washington’s family, President Washington’s sister), the Lee Mansion in Arlington, Virginia; Wakefield (the birthplace of George Washington) in Wakefield, Virginia, and the ancestral home of Franklin Delano Roosevelt in Hyde Park, New York. 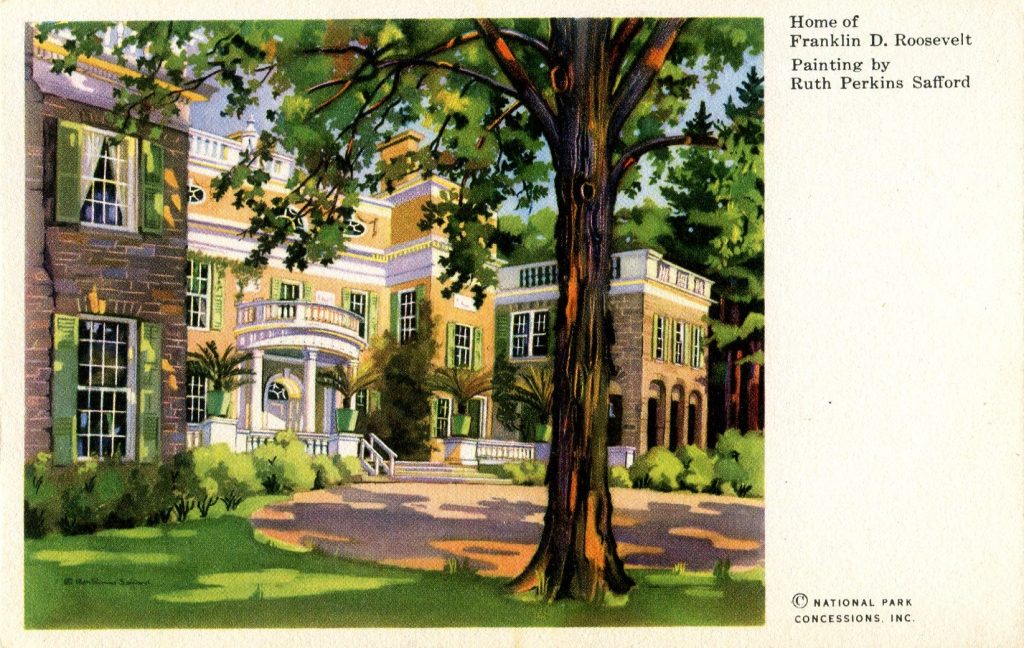 I would feel safe in saying that most of you have seen several of Mrs. Safford’s cards.

A recently completed search to find more information about Mrs. Safford discovered that Ruth Appleton was a native of Massachusetts and enjoyed her teenage years in a wealthy family from the Boston area. Like many others of the time, the Appletons “summered” in Blue Hill, Maine.

In her mid-twenties, Ruth married a young naval officer named Laurance Frye Safford. Because of Laurance’s military assignments their early married life was spent at over twenty different addresses from Washington, DC, to Singapore.  Yet during the summer seasons, whenever possible, they returned to Maine where Ruth would paint and Laurance would enhance his skills as a cryptologist.

The Sixteenth Census of the United States (1940) found Laurance and Ruth Safford at 2821 29th Street in Washington, DC. The “Sixteenth” census asked where the individual lived on April 1, 1935. The question was suggested by the Commerce Department. The rationale was to ascertain how the Great Depression affected the migration of Americans through the decade of the 1930s. Mrs. Safford’s reply to that question was, “Following the Fleet.”  This is certainly a reference to the many places the Saffords resided during Laurance’s tours-of-duty.

Only a short time after that census Laurance would be one of the U.S. Navy’s key individuals who warned the military authorities in Washington that the Japanese had plans to attack Pearl Harbor on December 7, 1941.

Ruth Safford was featured in the July 1971 issue of Down East: The Magazine of Maine. Within the article Mrs. Safford recounted the days she spent sitting in the Mount Vernon dining room painting. She worked there while thousands of tourists filed through the room on guided tours. “I had to force myself not to talk to anyone,” she said.  And she explained how difficult it was to ignore people who would stand for an hour or more peering over her shoulder.

The Down East article also recounts the only private art sale Ruth ever held. It is quite amusing to learn how someone with so much enthusiasm for life can be so naïve in the ways of commercialism.

Laurance retired from service in 1953, but his life like so many of ours, was fueled by a serious case of curiosity. In his later years, Laurance developed an interest in the failed attempt by Amelia Earhart to circumnavigate the globe. He authored a book entitled, Earhart’s Flight into Yesterday, the facts without the fiction. Sadly he died before he finished. However in 2003 former naval colleagues located the manuscript and published Captain Safford’s research.

Laurance died in 1973 at age 79. Ruth died in 1978. They are resting in Oak Hill Cemetery on R Street in Washington, DC. Both these amazing individuals are buried in unmarked graves. There are no headstones to remind the world of them and the wondrous things they did.

Perhaps not a tragedy, but truly unfortunate!

Some of Ruth Safford’s Postcard Sets 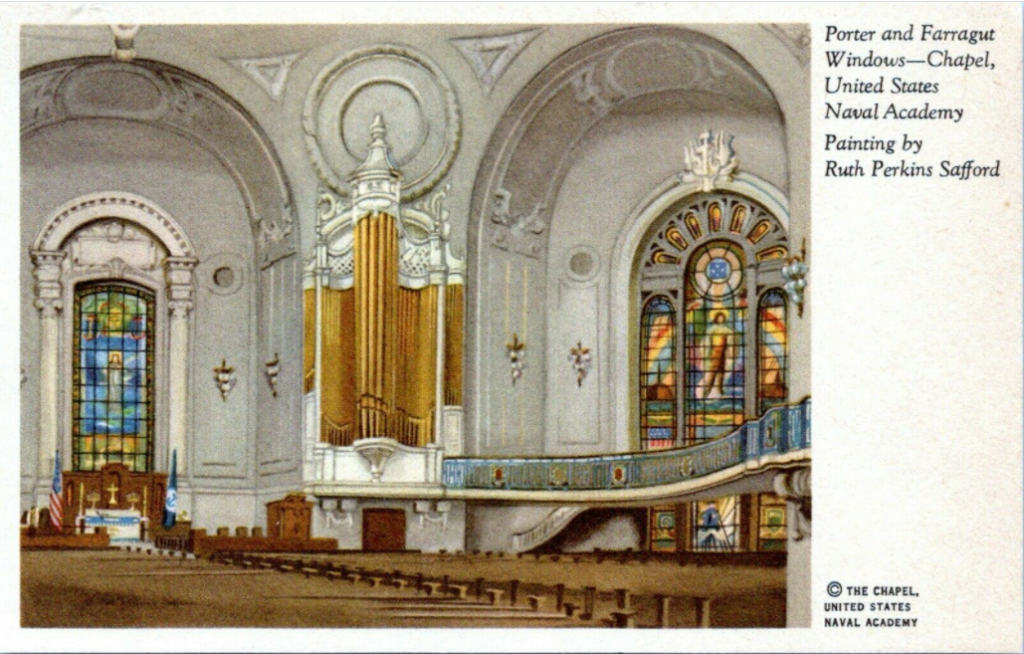 Ancestral home of the Roosevelts 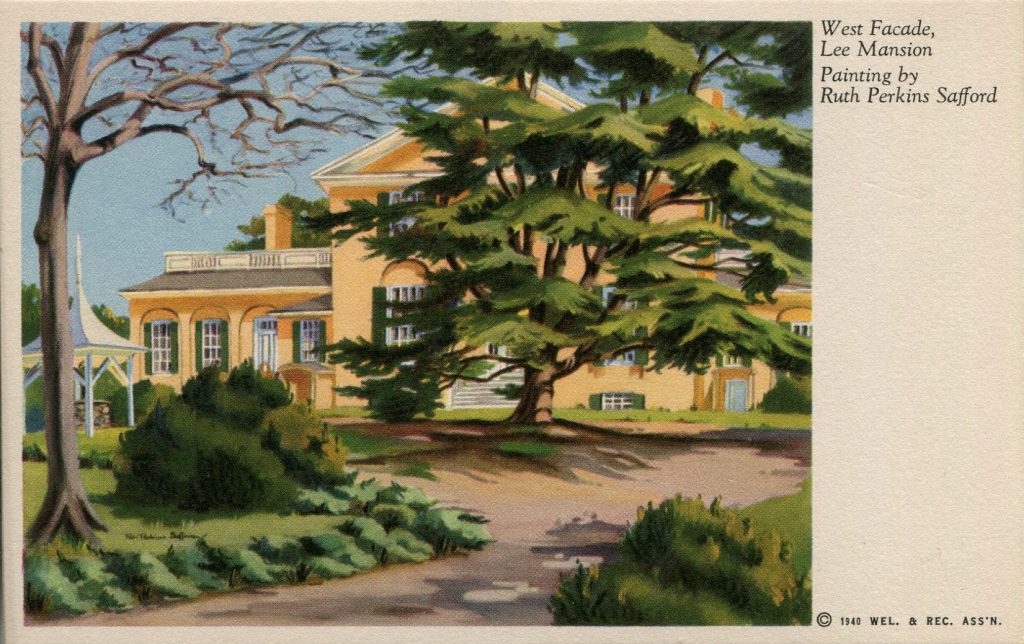 The Staff of Postcard History offers this article for your enjoyment. It is a combined effort of many: our publisher, editor, webmaster and collectors/contributors far and wide. Please use the COMMENTS feature below to let us know how we're doing.
PrevPreviousThe March 2021 Postcard History Quiz – Lions on Bridges
NextTombs of the UnknownNext
3 Comments
Oldest
Newest Most Voted
Inline Feedbacks
View all comments
Howard R Hart

What a delight finding this gem of an article with such lovley postcards! Almost Haiku in its brevity, it incapsulated a novel’s worth of life. Wonderful!

Interesting article. I wonder if Ruth was related to Jane Means Appleton, the wife of President Franklin Pierce.

Yes, I have had several postcards by this lady, and always thought they were quality, the way the paper felt and the printing…the sort of think I admire and like. Sad to know that she and her husband are buried in unmarked graves. But at least we know they are buried there.