The Land Between the Rivers

Somewhere near one-hundred sixty miles north of New York City, a motorist on Interstate 87 comes to a spot a few miles west of Albany where I-87 intersects with Interstate 90. Continue a few miles west and you find yourself in Schenectady, New York, where Interstate 90 falls into a scenic and comfortable drive along the Mohawk River Valley.

Within the next fifty miles you drive by places named Rotterdam Junction, Pattersonville, Amsterdam, Tribes Hill, Fultonville, Palatine Bridge and Saint Johnsville. These and perhaps twenty other towns and villages fill a triangle of land south of the Adirondack Park. It has been referred to as the land between the rivers – the Mohawk and the Hudson – although that reference may not be a common one.

Other cities, some distances from the rivers are Johnstown, Gloversville, Broadalbin, Ballston Spa, and Saratoga Springs. The enthusiastic historian could spend a month in the area and scratch only the first tier of stories off these historic hills.

It is a bit more than 60 miles from Johnstown to Schuylerville – traveling mostly northeast along State Highways 29 or 67. It is simply impossible to drive these roads at highway-speeds. In some places it is almost a mosey or an amble yet it others you may manage a trot or a jog. It doesn’t matter, history only travels at the speed of time.

Time in this era for a young Irish immigrant name William Johnson began when he moved to the Mohawk Valley to manage an estate owned by his uncle, a British Admiral. The estate was in the New York region populated by the Mohawk who were a part of the Iroquois League. Johnson learned the Mohawk language and soon earned an appointment as the Superintendent of Indian Affairs for the British in New York. 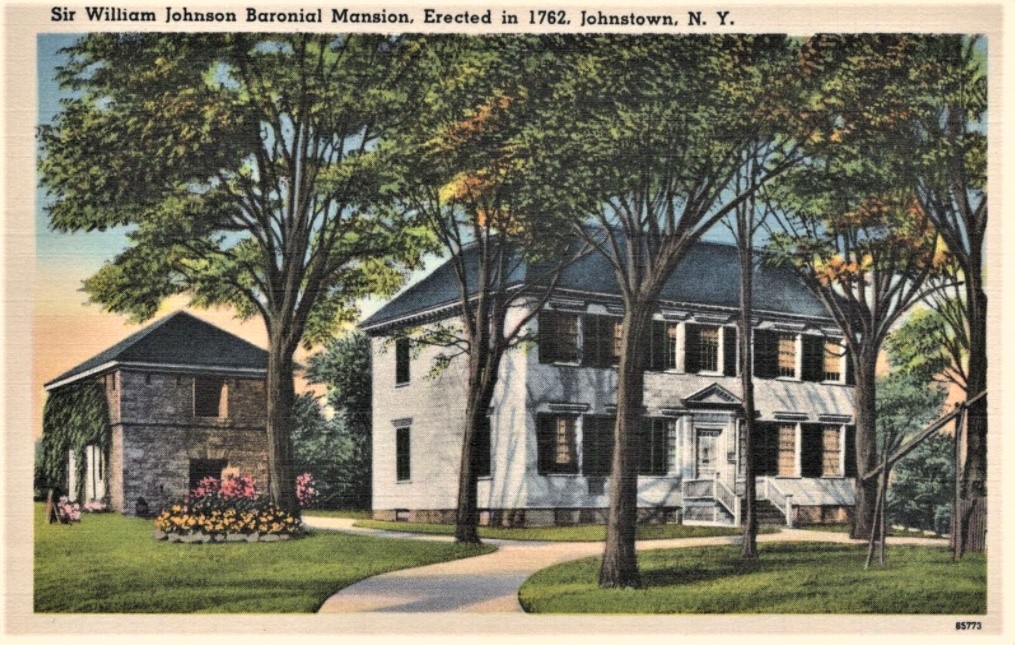 It is no coincidence that the address of the Johnson Hall State Historic site is in Johnstown, New York. Sir William has been credited as the city’s founder.

The property is located on West State Street near Hall Creek. The creek was later used to power a sawmill that produced the lumber for building the home. In the years following the Seven Years War (circa 1763) the mill became a gristmill that profited Johnson enough to acquire 400,000 acres of land. He died in 1774.

After the American Revolution the house was sold to Silas Talbot, who I am sure you all remember was the commander of the most famous ship in the American Navy – the USS Constitution.

Johnson Hall was a private home until the state bought it for preservation as an historical home museum in 1906.

Twenty-seven miles south of Johnstown, nestled at the foot of Rundy Cup Mountain is a village only a few years younger – the village of Schoharie, New York. Today there are perhaps a thousand who live there, but it is the church building and its cemetery that tells the history. 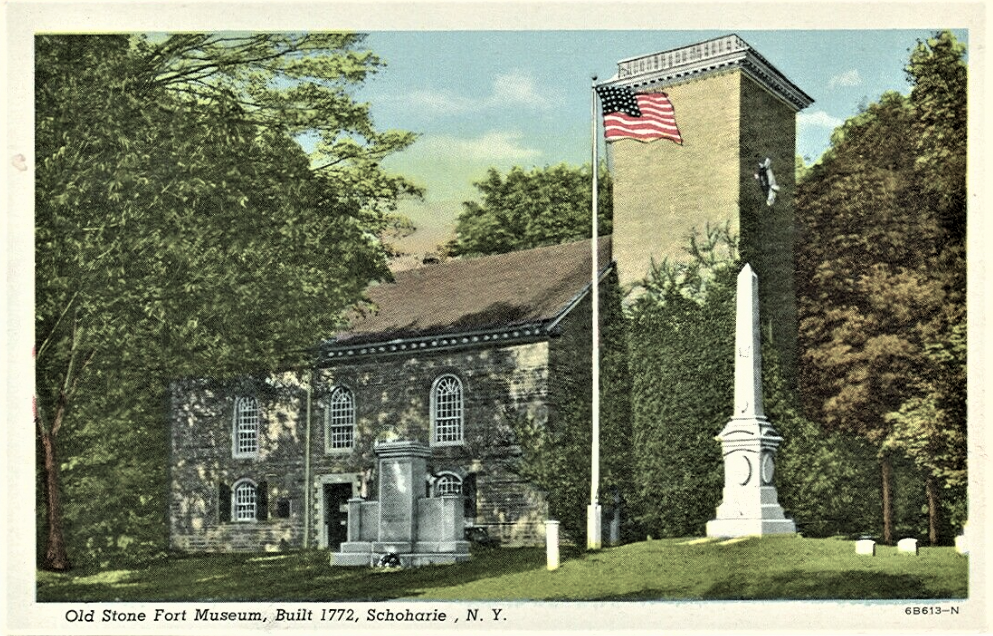 Built in 1772, the Old Stone Fort was a Dutch Reformed Church. During the American Revolution the church was the most secure structure in the area and thus became a fort when it was surrounded by a log stockade.

One battle occurred at the fort on October 17, 1780. There was no significant damage to the fort except for a gaping hole in the cornice at the rear of the building cause by a cannonball.

The stockade came down in 1785 and religious services continued until 1844. A dozen years later the state purchased the fort for $800. Oddly, the state used the building during the Civil War as an arms depot but abandoned the site immediately after the war.

The Schoharie Historical Society was formed in 1888 and began oversight of the property. In 1889 a catalog of the holdings was initiated and by the turn of the 20th century the Society had recorded over 2,500 holdings and purchases – essentially an inventory of late 19th century Americana.

The Old Stone Fort is still open to the public under the auspices of the historical society for historic and genealogical research from May to October.

On the other side of the Land Between the Rivers is another historic town named after an American Revolutionary War General and US Senator from New York, Philip Schuyler.

There are no less than seven historic sites in Schuylerville. Each is worth a visit, but the stone obelisk on Burgoyne Road is by far the most curious, especially when the man who is not honored there is taken into consideration. 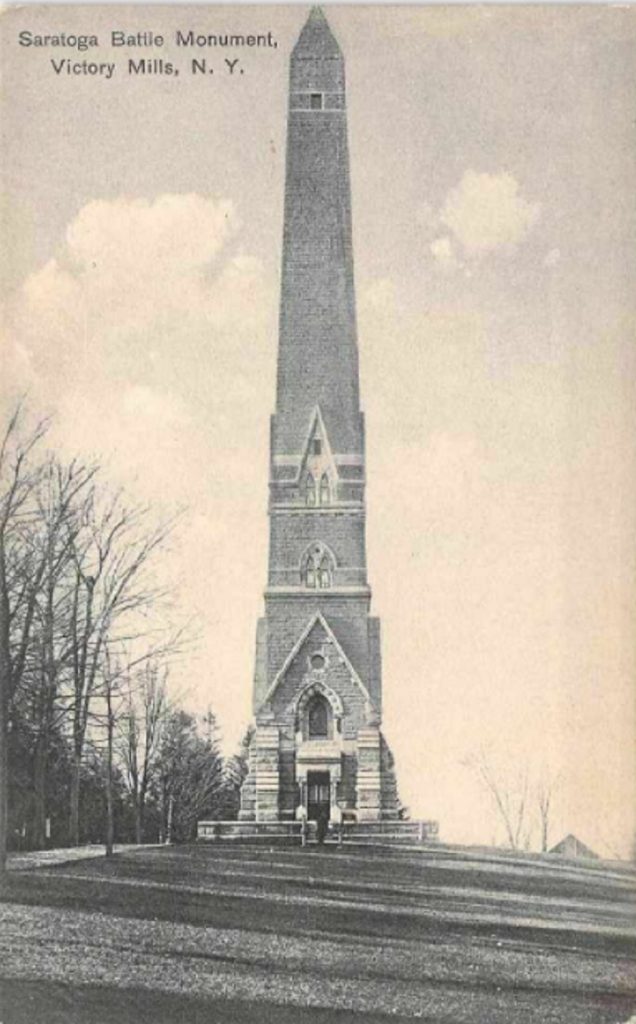 Situated on a bluff above the Hudson River, it has staircases that a visitor may climb to five levels from which they can view the countryside and finally to a view platform at the top.

The interior walls are decorated with dynamic panels that dramatize the war, but the most unusual feature of the monument are its four niches. The original intention was to install life size statues cast in bronze honoring the four commanders of the battle in Saratoga: Gates, Schuyler, Arnold, and Morgan.

There is considerable lore and speculation that surround these men, but the reasons for honoring them are not cloudy.

The Saratoga Memorial Association was formed in 1856 at the Schuyler house in Schuylerville. It had fourteen members. Hamilton Fish was elected the first president.

Incorporation came by the state of New York in 1859, but the Civil War interrupted their actions until interest in the project regained momentum in 1872. The New York legislature provided funds of $50,000 in 1874.

Since state funding was inadequate, association members drafted requests that asked each of the thirteen original states to promise a minimum of $5,000. Only Rhode Island replied.

The final design that included the four honorary niches generated the most controversy.

Nevertheless, the project continued and a decision was made to move forward with the design unchanged. 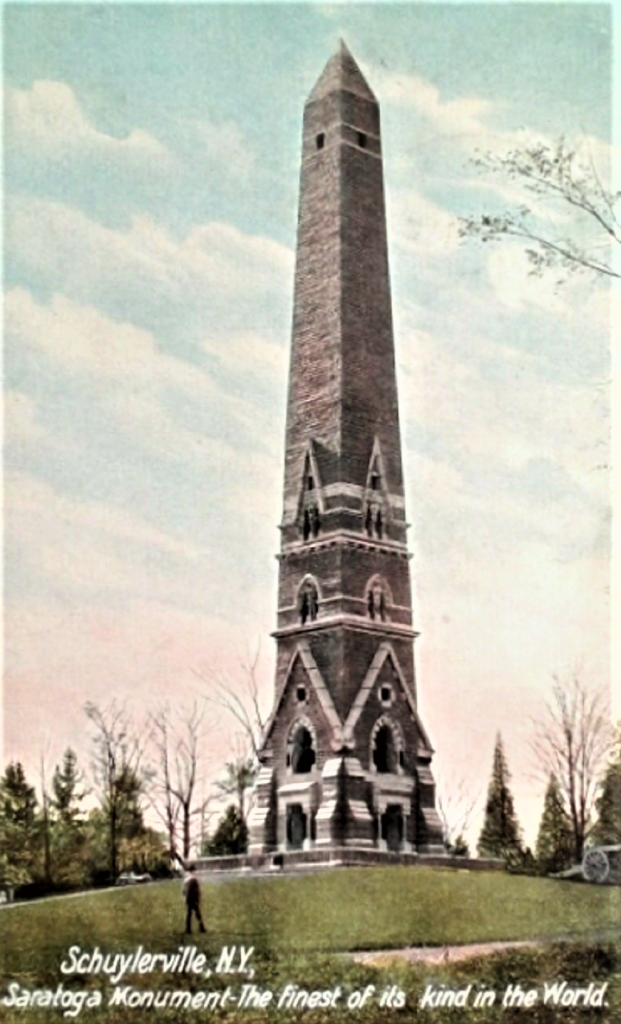 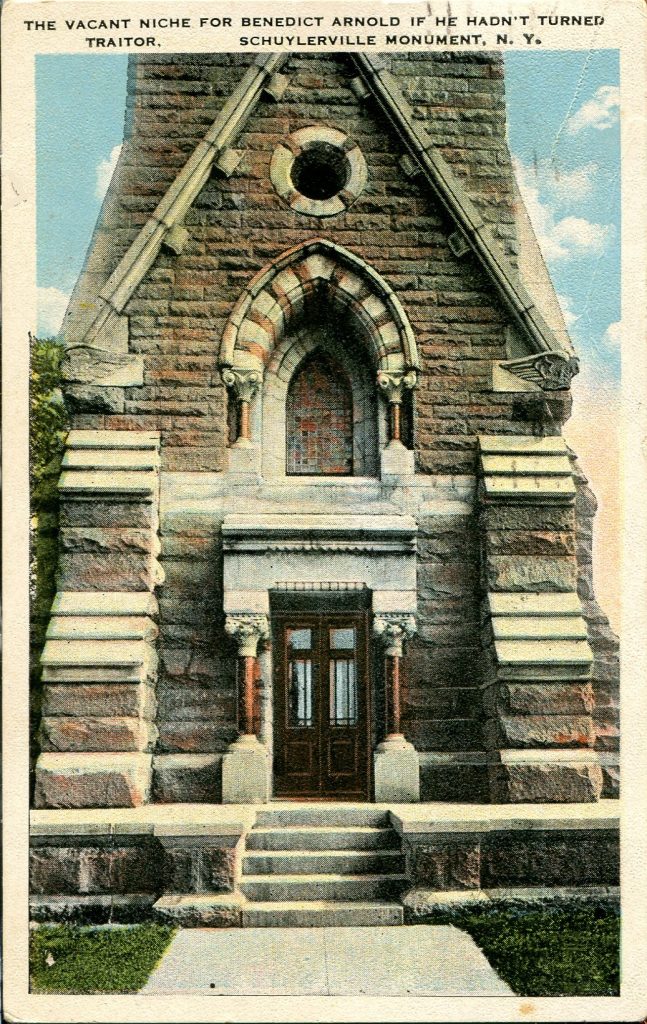 General Gates was the first honoree. He had been the commander of the battle ergo his statue was situated in the niche that faced north. From there the statue would suggest that he could see the horizon over which the southward bound British army could be anticipated.

General Schuyler’s statue was positioned facing East. Those making the placement decisions thought the statue should view Schuyler’s estate that was down the hill and to the east. The estate that the British burned as they retreated to the north.

In the niche that faces west, the committee put the statue of American Colonel Daniel Morgan. Morgan commanded the riflemen and infantry at the western edge of the battlefield. It was thought that the British would retreat in that direction.

The fourth niche – the empty niche, facing south toward the battlefield, was originally for a statue of American General Benedict Arnold. It was Arnold whose name became synonymous in the United States with treason because of his actions in battle against the men he once commanded. It would appear to be that the Association never intended to fill the south facing niche. Hence the controversy.

The cornerstone ceremony took place exactly 100 years to the day after Burgoyne surrendered. There was great pageantry during the ceremony that included a parade, lots of patriotic music, and plenty of speeches. The capstone was added in November 1882, the bronze statues were completed in August 1887, the formal dedication came on October 18, 1912 – 56 years after the Saratoga Monument Association was organized.

I now want to visit the area!

Take a tour up the Hudson River and see the historic house overlooking the river. Then Rhinebeck and vineyards alone the way to the area the author is discussing. Definitely stop at Saratoga then on to some truly beautiful natural country.
AAA still does their “trip-tick” so that would make a nice road trip for this summer.

Interesting that Arnold is more famous for being a traitor than any of men honored by the monument’s states are for their heroics.