Catching up with Postcard History

Postcard History will celebrate two years of publication at the end of May. As the editor, it has been a pleasure to work with a team that strives to make postcard collecting both fun and educational.

The website statistics are encouraging and some should be announced. The basic team consists of three individuals who literally pour their hearts and souls into this project. There are over sixty people who have made contributions as writers, consultants and advisors, or card lenders. And most importantly – our 90-day averages show that more than 15,000 readers view the pages of postcardhistory.net each month. Your comments are a much appreciated source of inspiration.

If you would like to join the team, your contribution will be reviewed and considered for publication when you email it to editor@postcardhistory.net.

As the weeks go by Postcard History Online Magazine publishes four articles with the hope that we can cover the entire story in one shot. Needless to say, it does not happen the way we plan and as new material is sought we “accidently” discover cards that would have made “perfect” illustrations for the article we published last month, last week, or yesterday.

Here are three examples from our first year of publication. 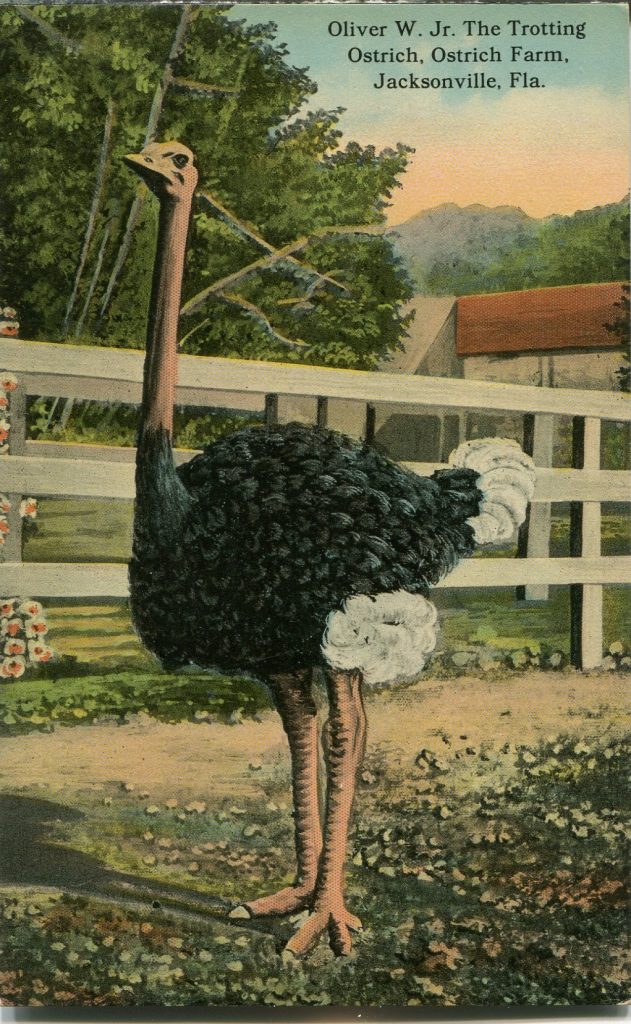 John McClintock never revealed his fascination with ostriches, but as a friend, I’m certain that he would have liked the new card found in a dealer’s stock earlier this year.

John liked things real and uncomplicated. If he read the caption on this new card his eyes would light up and he would tell everyone around him the story of Oliver W. Jr, the ostrich in the picture. “Look at it,” he would say, “the caption says, Jacksonville, Florida; Oliver was the most famous ostrich ever.”

Oliver entertained the visitors at the Florida Ostrich Farm, a parkland attraction on the south bank of the Saint John’s river that from 1910 to 1919 was a “must-see” for Jacksonville vacationers. If you wanted, you could take a local streetcar directly to the farm.

Oliver was a giant by comparison; he stood well over six-feet tall and scaled in at near 150 pounds. He was strong enough to pull a four-wheeled cart with four or five passengers. He could carry most adults on his back and could run faster than a man.

Oliver and other birds like him sired many offspring that made it possible for visitors to go home with unique keepsakes like ostrich feather fans, boas, pompoms, and stoles – all in a variety of colors. 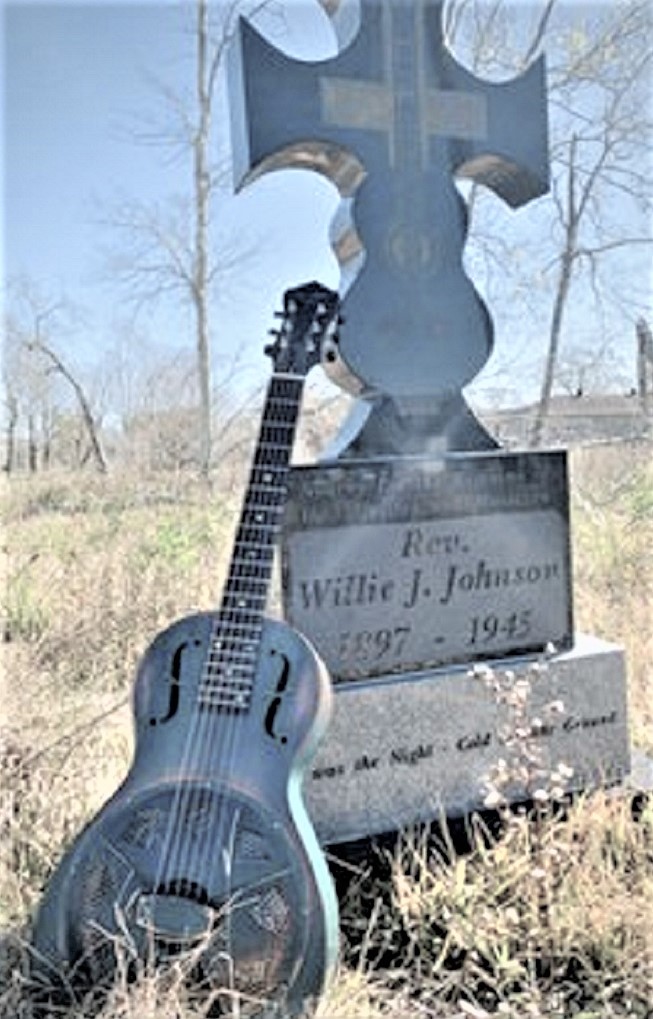 The only known photograph of Blind Willie Johnson is on the card that appeared with the article in Postcardhistory.net.

The story of Johnson’s life is a tragic tale. His blindness, caused by his stepmother when she thew lye in his face after an argument with Willie’s father, designed most of his public persona. He was frequently “used” by his supposed friends. His records sold well, but he was often without funds to support his meager lifestyle. Willie’s home burned in 1945, but he was forced to live in the ruins, where he was exposed to the weather and contracted malaria. In the end he was refused medical attention at the local hospital, some say because he was blind and poor, others say it was because he was black.

Blind Willie Johnson’s music will continue from history to the future through a very special recognition. One of his songs, Dark Was the Night—Cold Was the Ground, was included on the Golden Record, a phonograph record carried by the NASA Voyager space probe to introduce human civilization to any form of extraterrestrial life that may encounter it.

It is unknown when Dr. Matter authored the original article, but it was certainly before researchers rediscovered the cemetery in Beaumont, Texas, where Willie was buried.

The new card, found in October 2020, is a chrome printed in Texas without a publisher’s name or date. It shows a rather elaborate memorial in what seems to be a unkempt, common weed patch. The authenticity of the card has not been verified, but on the Find-a-Grave website it is suggested 2010 was the year the monument was erected. 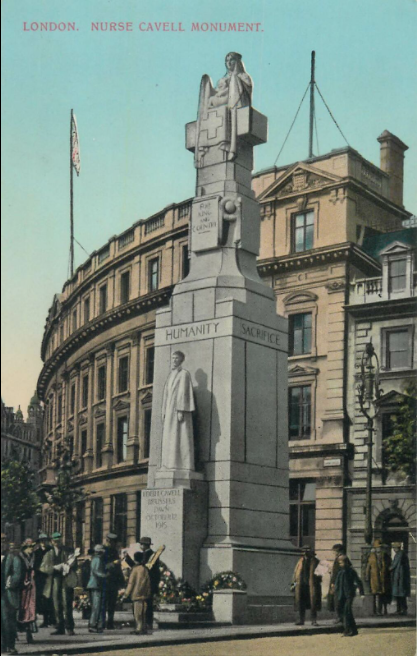 Don Matter was a rare collector; he managed to accumulate thousands of postcards and believed each one told a story worth telling. I met him at a postcard show along the Jersey Shore when he still lived on Long Island. When he retired and moved to Arizona he sold most of his collection to dealers. He once told me, “My cards deserve to be returned to the hobby for new collectors to buy.”

He liked historical cards the best, but he was absolutely indignant about unjust events when innocent people were prosecuted or harmed by tyrants, politicians, or bigots. So when he authored his version of the Edith Cavell story, he was right in his element.

During a 2020 search for a narrative on the Peter Pan statue in Hyde Park, London, the sculptor’s name brought other works to my attention. As happenstance would have it, you go your whole life without hearing about a person, then all at once the same name reappears again and again. One such, was sculptor George Frampton, an Englishman who created an Edith Cavell memorial in London.

The granite statue is modern, seemingly out of time with the era in which Edith Cavell lived, but nonetheless striking and worthy of its honoree. Sir George James Frampton is someone you will read about in the future at postcardhistory.net.

Ray Hahn is a retired educator, but he has never stopped teaching. His decades of researching, writing and editing a newsletter for the South Jersey Postcard Club has been a world-class education in trivia. In addition to postcard collecting, Ray’s other interests include history, genealogy, and touring the world with his wife Marie. Ray often advises his readers to "Join me as we explore the world one postcard at a time." Ray and Marie live in New Jersey.
PrevPreviousFort Pickett
NextCatching up with Postcard History PART TWONext
3 Comments
Oldest
Newest Most Voted
Inline Feedbacks
View all comments
Shav La Vigne

I look forward to reading every issue and appreciate the work that all of you do in providing knowledge and entertainment to all deltiologists! Please keep it up.

Thanks to this update, I got to read three articles published before I joined Facebook and subsequently discovered Postcard History.