A clerk in a Fredericksburg, Virginia antique shop was counting the postcards I wanted to purchase. She stopped for a second, held up a card and said, “Fort Pickett is about a mile from where I grew-up in Blackstone, Virginia.”

When the sale was complete, no one else was waiting, so I asked her to tell me about where she grew-up. Her reply was short, but sincere, “Camp Pickett is near Blackstone. It was my home for 18 years and I loved living there.”

Blackstone, Virginia, is a community of almost four-thousand people located just west of Interstate 85 in south-central Virginia. For a place of its size, it has a long and interesting history, including six sites on the Register of Historic Places. 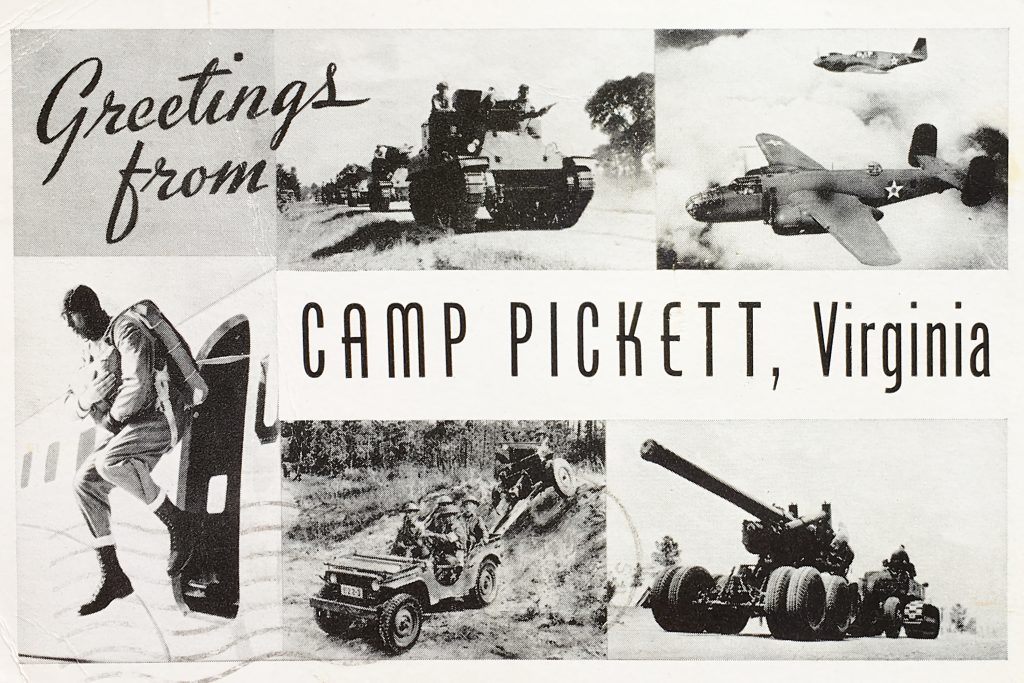 Camp Pickett is not on the “places” list, but there are some stories about the camp’s namesake that deserve a re-telling.

In Richmond shortly after the Civil War, Robert E. Lee was appearing before the Virginia legislature seeking funds for what became Washington & Lee University. His presence in the city was noted in the local press, along with the name of his hotel. Former Confederate generals Pickett and Magruder (both West Point graduates) were likewise in town and Magruder commented to Pickett that the “old man” was in Richmond and courtesy dictated a call.

Both went to Lee’s room where they were politely but coolly received. Having fulfilled their obligation as they saw it, they descended a flight of stairs leading to the lobby. On the way down, Pickett voiced displeasure about Lee and said, “he wasted my division at Gettysburg.” Magruder without missing a beat replied “yes, but he did give you immortality.”

[Interestingly a similar account exists suggesting that it was Pickett who wanted to visit Lee and it was he who asked John Singleton Mosby to accompany him. The second iteration has Mosby, not Magruder, making the comment to Pickett about his immortality.]

Virginia generals led by Jubal Early spent the postwar years developing the aura of the “Lost Cause,” and forming the Southern Historical Society. They lauded Lee at every opportunity, both in oratory and in writing.  Pickett was probably the lone dissenter among them.

Immortality is a fragile state. The checklist of military installations named for generals is getting shorter these days. It is not coincidence that the three generals who met in that hotel room in Richmond each had military sites in Virginia named after them. They were Fort Lee in Fort Lee, Virginia; Fort Magruder in Williamsburg, and Fort Pickett in Blackstone.

The postcards of Camp Pickett are scarce these days. Mostly from the linen era, each card shows the one or two-story buildings that made up the administrative headquarters and the service buildings used by those stationed at the camp. 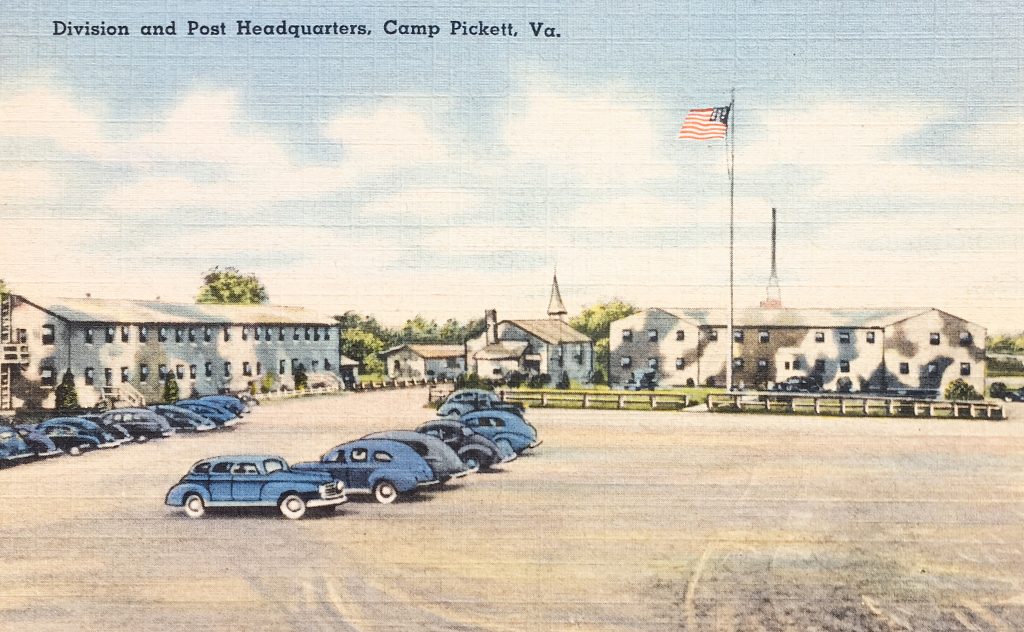 Camp Pickett is not on the “places” list, but there are some stories about the camp’s namesake that deserve a re-telling.

Fort Pickett was established on what was once a Civilian Conservation Corps site. There was enough government land there to build a facility large enough to train more than one infantry division. (A division is usually comprised of three or four brigades of ten to fifteen thousand soldiers, with a major general commanding.) Construction began late in 1941.

Members of the First Battalion of the 116th Infantry arrived at Fort Pickett on December 6, 1941, after an extensive stay at war games in North Carolina. Because of the events the next day at Pearl Harbor, their return to Fort Meade in Maryland was delayed until details of the situation were known. By default, the 116th is considered the first-use unit.

By the same time the following year (1942) more than a thousand buildings, including chapels, a hospital, six firehouses, and more than fifty warehouses were in use around the fort. When at full capacity – 60,000 soldiers and officers – it became necessary for the Army to build and maintain its own water and sewage treatment plants. 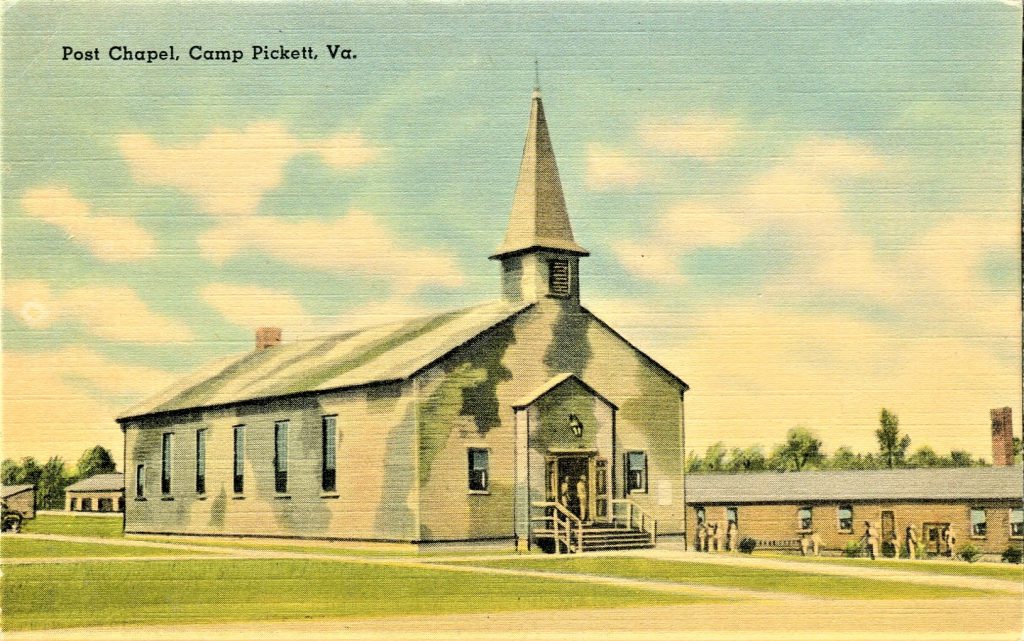 Also, as time passed and expansion continued movie theaters, a field house with a full gymnasium, a post office and several PXs were added. At the war’s end there were over 300 buildings being used as female and prisoner-of-war barracks. 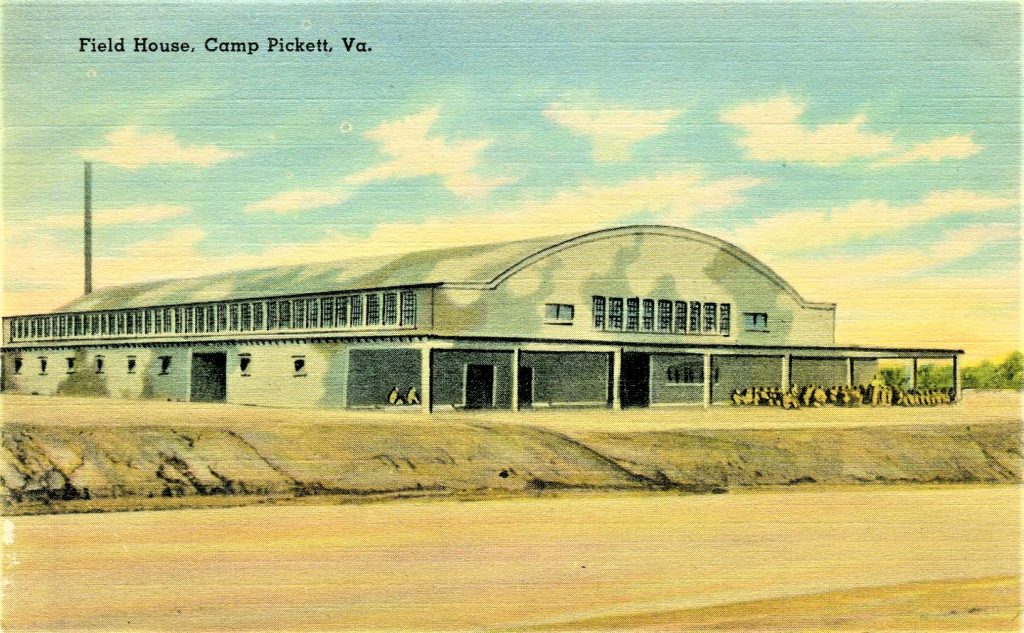 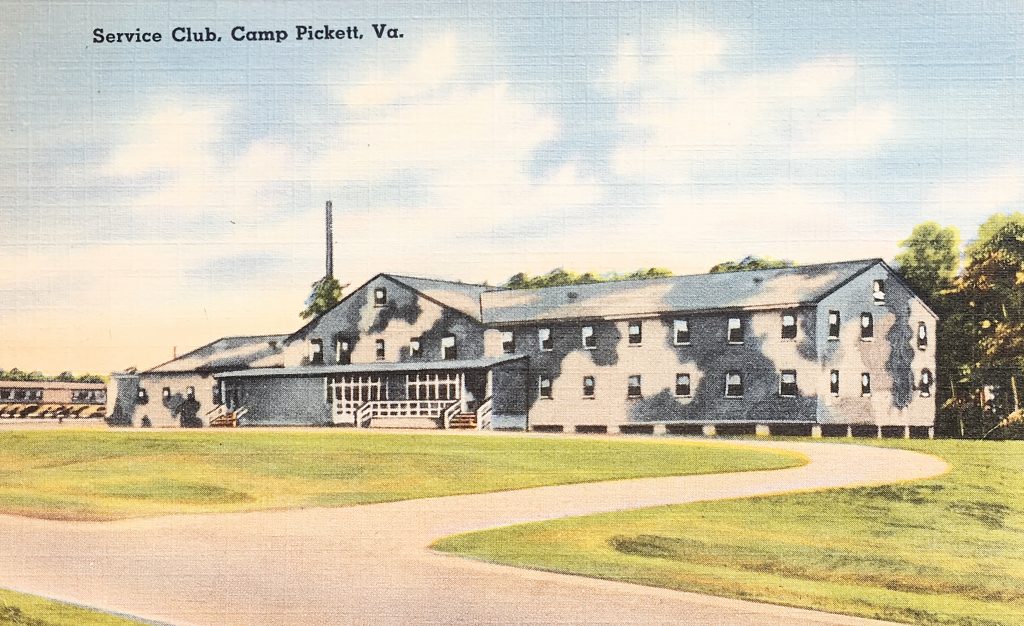 As you examine the postcards the unusual paint scheme may have caught your attention. The camouflage was abandoned circa 1949. 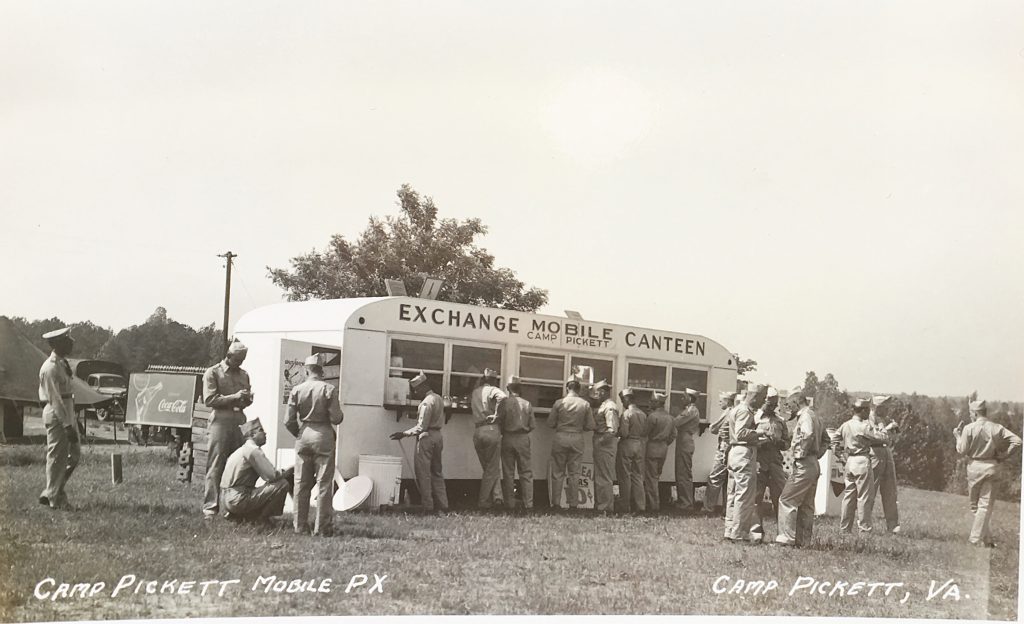 Operations at Fort Pickett continued throughout the Cold War period and until 1996. It was then that an order of deactivation was issued for enactment in 1997. After nearly sixty years of service, Fort Pickett closed, but it is still in use by several organizations (some international, Canadian) for training of all kinds. Agencies such as the U. S. Marshal Service, FBI, ATF, the Civil Air Patrol and the Virginia State Police still use the facilities.

General George Edward Pickett never resolved his conflict with Robert E. Lee. It may be that neither cared to do so. He lived with his unwanted sobriquet until his death in 1875.

History is cruel to many, but perhaps the name Pickett will be immortal.

Special thanks go to Hal Ottaway of Kansas for his loan of postcards used to illustrate this article. Also to Neilson Wood of Pennsylvania for his scholarship and appreciation of Civil War personalities.

Ray Hahn is a retired educator, but he has never stopped teaching. His decades of researching, writing and editing a newsletter for the South Jersey Postcard Club has been a world-class education in trivia. In addition to postcard collecting, Ray’s other interests include history, genealogy, and touring the world with his wife Marie. Ray often advises his readers to "Join me as we explore the world one postcard at a time." Ray and Marie live in New Jersey.
PrevPreviousRobert E. Lee, a Gallery of an aging man
NextCatching up with Postcard History PART ONENext
2 Comments
Oldest
Newest Most Voted
Inline Feedbacks
View all comments
Meryt Allmendinger

The mention of General Magruder reminded me of Jeb Stuart Magruder, the Watergate scandal figure who was named by his Civil War buff father in honor of another Confederate military officer, J.E.B. Stuart.