A Tour of English Castles

Here in northern Minnesota, the summer of 1980 was especially nasty. More black flies than usual, rain every day or at least every other day. The sun would shine from time to time, but it was always gray and hazy. The TV news programs said it was because of the volcanic ash spewed across the continent after the eruption of Mount Saint Helens.

We decided early in August to leave town! Wow, where would we go? My husband sat down with me on the porch swing one afternoon and suggested that before our passports expire, we should revisit England, as we had promised ourselves, on our honeymoon seventeen years before.

Ten minutes later, Jim called our travel agent with instructions to book two tickets to Heathrow, a rental car, two-night hotel stays in Kent, Essex, Sussex, and the Isle of Wight. That was a Monday. The following Monday we were on our way to the UK for a ten day “castle hop” across the south of England. It was a trip we had planned years ago, but never took because “life” sometimes gets in the way of having fun.

The inspiration for the trip was a set of Tuck Postcards that I found in an antique shop over a decade before I met Jim. The set is called “Picturesque Castles.” There are six in the set. Five of the six cards are signed by someone named A. Aveling. I later learned that Aveling is a fairly common name in England (and France), but I never had success in finding who A. Aveling was.

The art is charming and colorful. I suspect the original images were watercolor paintings of Upnor Castle, Leeds Castle, and Rochester Castle, each in Kent; Hadleigh Castle in Essex; Hurstmonceaux Castle in Sussex; and Carisbrooke Castle on the Isle of Wight.

I would later learn that although the art is beautiful, it is not altogether exact. I’m not sure why, it may be as simple as, the artist made the postcard pictures sometime prior to 1908 and we were looking at the same sight at least 72 years later.

When I found these cards in my collection while looking for something else, memories flooded back to mind. That summer trip was, after all, more than forty years ago. Upnor Castle in Kent (the most southeastern county in England) was our first stop. My most precious memory of that day was the quiet we found in the tiny riverside village of Upnor. We had arrived at 6:45 that morning on an overnight flight, the exaggerated hustle of arriving in a foreign country left us a bit weary. After retrieving luggage from the baggage carrousel, passing the passport check and customs, completing car rental paperwork and making our way out of London on one of their M-roads, tranquility was most welcome.

I’m sorry to report that I remember very little of the history of the castles we visited, but certainly anyone with a quarter-ounce of curiosity can learn the historical details on the Internet.

So, if you forgive me for the sketchy history, I would like to tell you of my recollections of these delightfully old places without a lot of detail. I may include a few things Jim remembers, too! 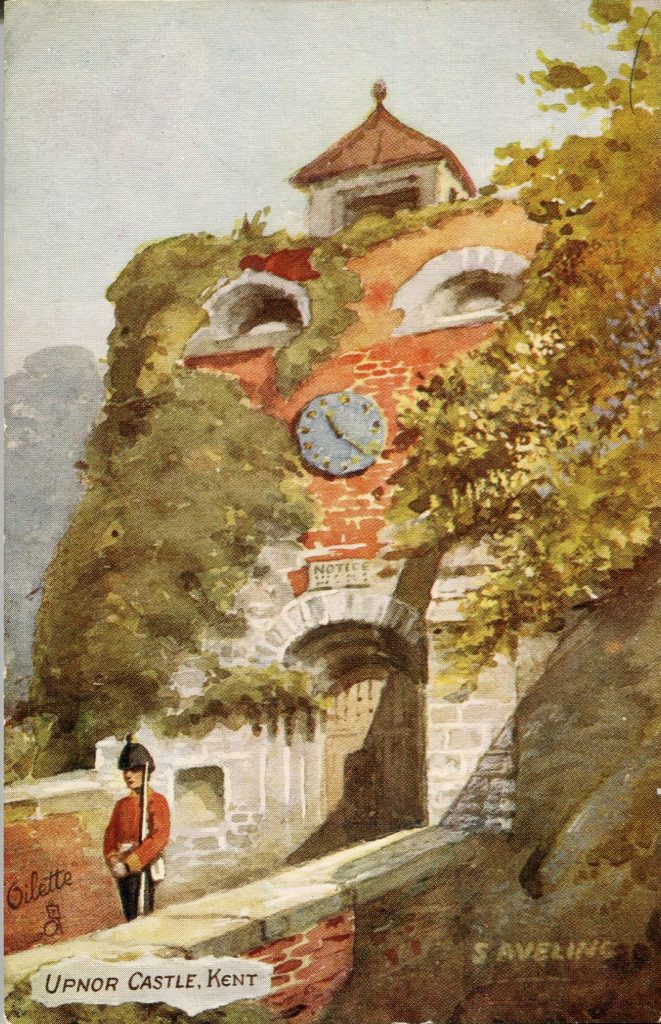 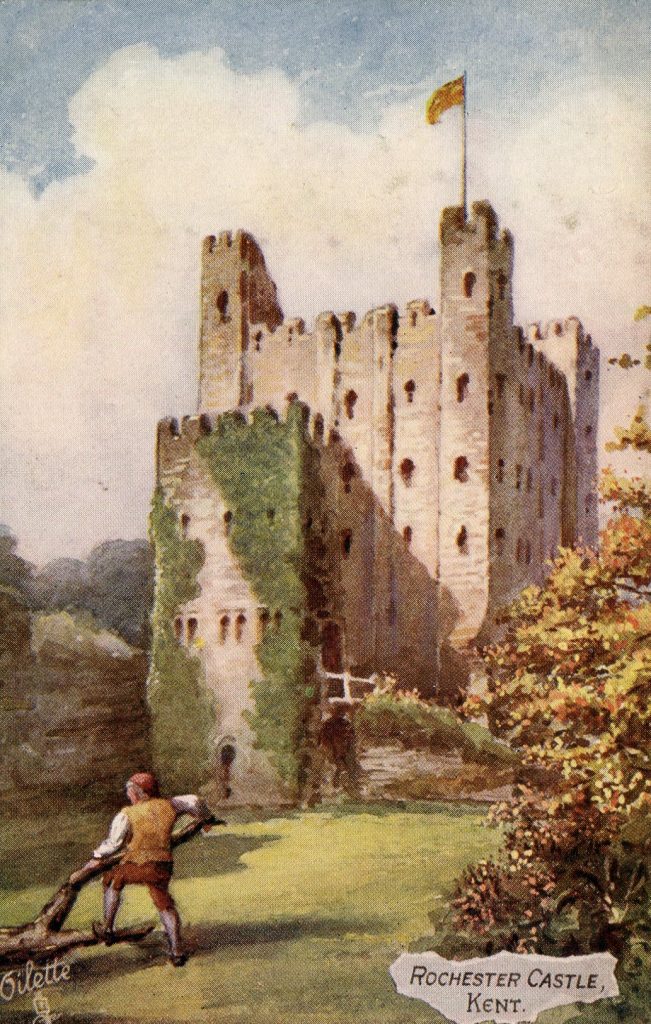 The one thing I remember about Upnor was the sandwich shop across the village square where I first learned ofBranston Pickle. The sandwich maker (I am calling her that because I know of no other way to describe her.) asked if I wanted Branston Pickle. Not wanting to appear to be an uninformed tourist, I replied with, “Yes, that would be nice.”

I thought a Branston Pickle would be just a pickle – I was, oh, so wrong.

Rochester Castle is less than five miles from Upnor, It had been a long day and we decided instead to find our accommodations for the night and visit the castle in the morning. We found the hotel on the main street of Rochester. Jim was a bit skeptical when we arrived, but we were both too tired to care. We parked the car and entered the front door to find the “reception” immediately to our left.

The clerk looked up from his ledger, took one glance at us and declared, “Gud ‘ay, folks, are you our American guests for the next two nights?” That exchange reminded me that most everyplace we go, we are recognized as Americans. Sometimes it is nice that that happens.

Rochester Castle sits at the top of a hill overlooking the river Medway. Four towers guard the corners of the structure. As we approached from the west, we noticed a flag flying, completely unfurled in a breeze from the east – the “Union Jack.” Yet, as we turned the last corner and pulled up to a full view of the castle’s façade, we noticed another flag flying from the opposite tower, “the Stars and Stripes.”

When Jim asked about the American flag being atop the castle, we learned that we had arrived on “United States Day.” It is a long-standing tradition at Rochester to fly flags of English-speaking countries that were or are members of the British Commonwealth.

If you have never travelled abroad and have never encountered an American flag you have no idea what a joy it is to see your own national flag on foreign soil. 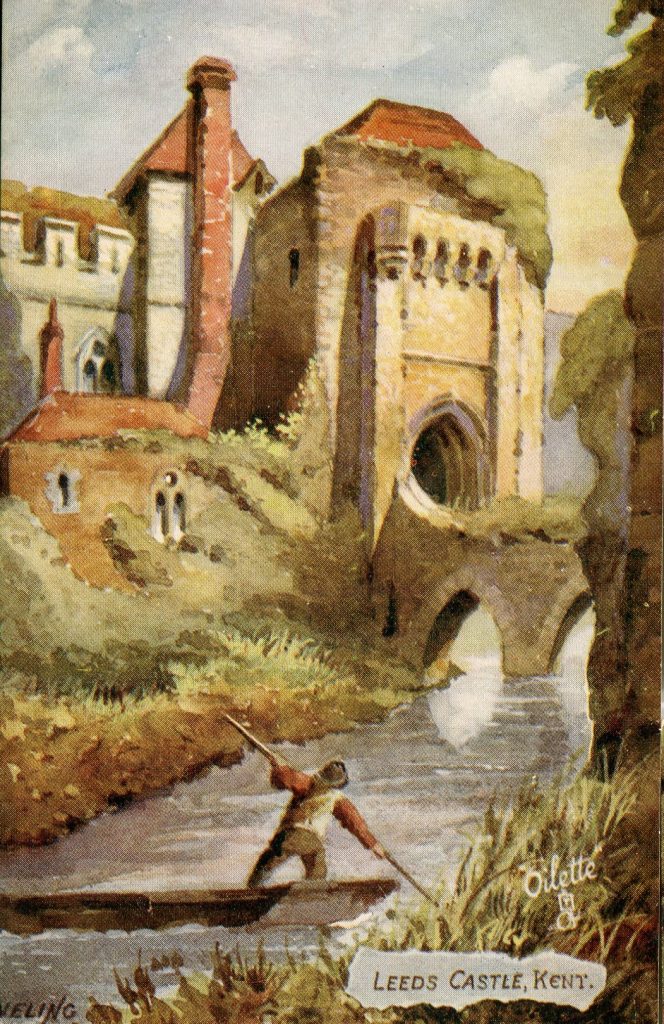 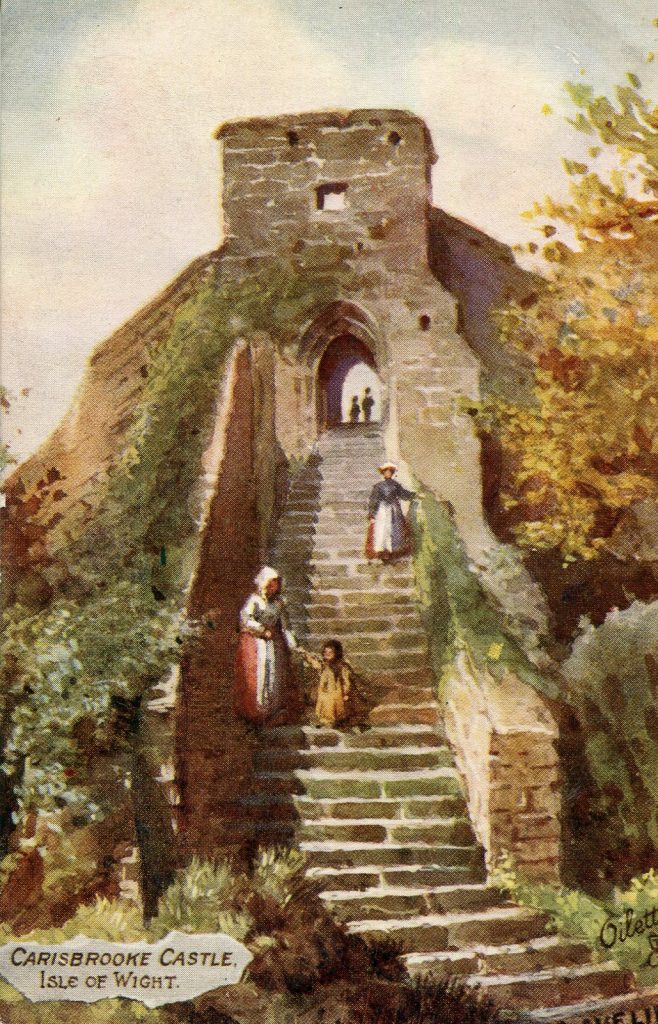 The drive to Leeds on a sunny afternoon in late summer should be likened to a ride in an amusement park. The road twists, dips and rises, then turns again, again, and again. The distance is mostly along a country lane. The sun shines through the leaves creating an alternating bright sun and shade “strobe” effect. Sadly any attempt to shade your eyes from this torture puts everyone in peril. Carry on forward and keep a stiff upper lip.

Leeds Castle was not a disappointment, but it was certainly our most strenuous visit. It sits on three interconnected islands in the River Len. Henry VIII lived here with his first wife.

We stayed too long at Leeds. Our tardy departure made us hurry to make our ferry-connection to the Isle of Wight. We were not last to drive onto the ferry at Portsmouth, but we were last to drive off the ferry at Ryde. The sun set on the Solent as the ferry docked. Thankfully our hotel was just a short way down the road to Newport.

After a great dinner in the Royal Esplanade Hotel, a grande dame of British tradition, and a good night’s sleep, we headed west across the Isle of Wight toward Carisbrooke Castle.

The castle is among the oldest buildings on the island and it continues to be a popular tourist sight in southern England. One interesting fact we learned there was that King Charles I was imprisoned in the castle for some time before he was beheaded for treason in January 1649. 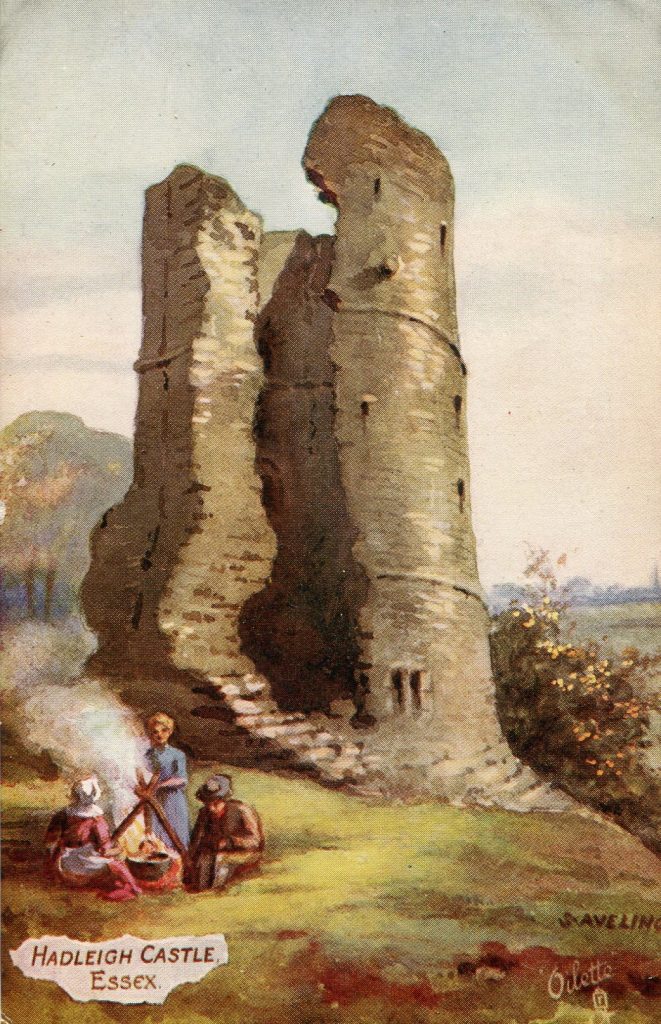 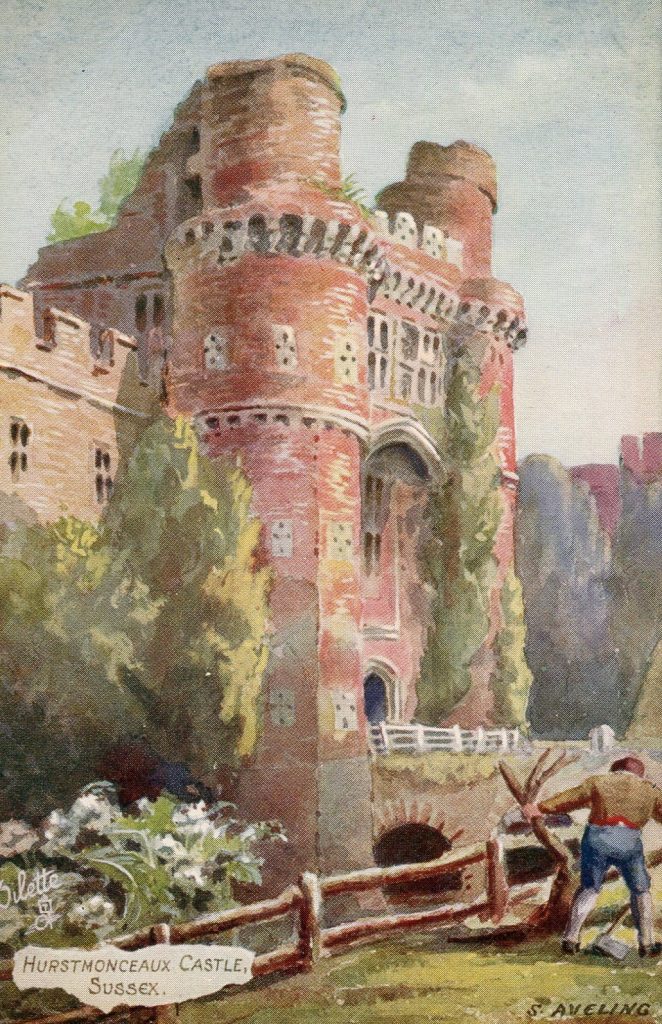 I guess we should confess that part of our trip was not well researched. In a conversation with fellow tourist on the Isle of Wight we learned that Hadleigh Castle was not worth a visit. It is a total ruin and there are no sights or facilities for vacationers. It was a disappointment, but we decided to cancel the Essex leg of our trip and stay extra days at the Esplanade. We suffered no hardship there.

The last card in the set of six is entitled, Hurstmonceaux Castle; the spelling in the title is wrong, it should be Herstmonceaux, but who knows, it may very well have been right at the time.

With just two days left in our castle hopping trip we started the ninety-mile drive to Hurstmonceau at 6 o’clock in the morning. It was cold as we drove onto the ferry; the wind was strong, but the sun was bright. The drive was easy along a coast road that offered great views of the ocean. We planned three hours for the drive, but traffic was light and we arrived at Hurstmonceax in time for the 12 noon tour – an hour earlier than expected.

We had a very pleasant visit. The castle is one of the very few in Europe constructed of brick. Hurstmonceaux has a reputation as a moated castle, but only the south and east sides are protected by the moat. There are more than 500 acres of parks and gardens surrounding the castle. It really was a don’t miss attraction when we were there, but I heard that it is now a study center for a university and the interior is no longer open to the public. Shame, but imagine my surprise when I took my grandson to a Harry Potter movie and saw Hurstmonceaux Castle playing the part of Hogwarts!

Edith Romaine has collected postcards from hotels and restaurants since 1995. She sorts her hotel cards into three categories: Haunted, Non-haunted, and Not Sure. The “haunted” hotel cards outnumber the others 2 to 1. Edith lives on the shore of a Minnesota lake.
PrevPreviousThe Equitable Building Fire in 1912
NextChildren of the NorthNext
5 Comments
Oldest
Newest Most Voted
Inline Feedbacks
View all comments
Susan Lane

Delightful castle tour, especially welcome as I won’t be making it to England this year even though there are some postcard fairs coming up.

Great little tour through reminiscence! I was reminded of my brother’s accounts of his time in England when he was met with bemusement as a “Yank” who engaged in such apparently exotic practices as daily showering.

Branston pickle is a form of pickled relish that is extremely popular in Southern England. It contains an assortment of mixed pickled vegetables, blended with various spices in a thick brown sauce, leading many people to confuse it with chutney. In Britain, this relish is readily available at most markets; outside of England, it’s stocked by some importers and large markets, and it can also be ordered through companies that specialize in food imports. – Had to look it up as I didn’t know what it was either.

Thanks very much for looking into this Branston pickle business. This sounds wonderful to me.

Have the good fortune to have been to Leeds Castle several times and was astonished to go through a Dog Collar Museum on the last visit, that was located before we crossed the mote to the castle gate. Many splendid dog collars are displayed there, some with spikes!