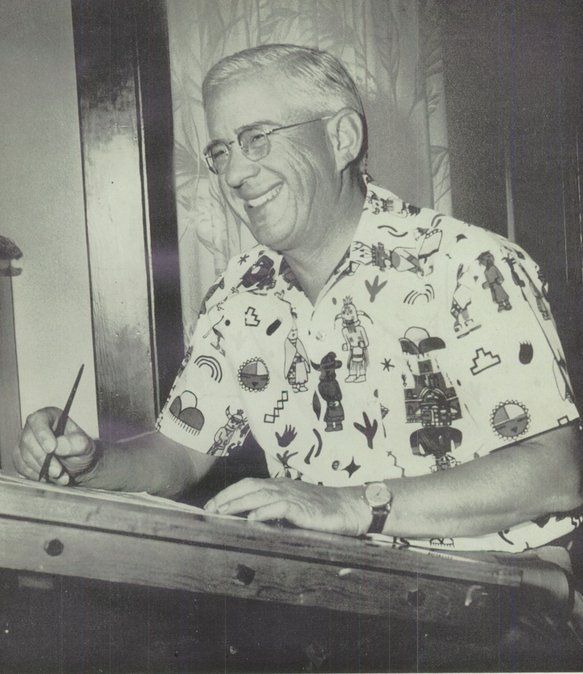 Reginald West Manning was born in April 1905. He was the youngest of four sons. His father, Charles, was a Santa Fe Railroad postal clerk, his mother, Mildred likely had her hands-full raising four boys. After Charles Manning died in 1911 at age 39, Reginald and his mother moved to Phoenix, Arizona, to live with Everett, Reg’s older brother. Manning’s first cartoons appeared in the Arizona Republic, Phoenix’s daily newspaper. At age 21 Reg married Ruth Littlefield.

From the late 1920s, and throughout the next five decades, the popularity of Manning’s editorial cartoons never faded. What made his work the topic of water-cooler conversations was his sharp wit and intellectual, yet comic manner of expressing either his approval or disagreement on topics as diverse as sidewalk crime to international politics. In a manner of speaking, he never retired. The last of his nearly 15,000 editorial cartoons appeared just months before his death.

Manning’s only son David made his career in the United States Air Force. He married Peggy Sue Blanton of Valdosta, Georgia.

Hostilities in Korea began on June 25, 1950. American military personnel had been home from Europe and the South Pacific war-theaters for less than five years when it became obvious that there was still work to be done to preserve democracy. The history books call the Korean War a “police action” or “conflict,” but as the commanding officer at M*A*S*H 4077, Colonel Sherman T. Potter once reminded Corporal Max Klinger, “It’s a war!”

There is an old expression about humor and its dependence on learning. It seldom appears in print, for it contradicts the basic theory of cartooning. Succinctly stated, it reminds viewers that, “… there is no humor without knowledge.”

This Reg Manning cartoon appeared more than 70 years ago. With all due respect, it is worthy of some explanation. It refers to headwear of the era. The politicos of the 1950s, most of whom were in their sixties and seventies were wearing their “top-hats” to official functions in places like Lake Success, New York – the one-time home of the fledgling United Nations. And, at the same time American soldiers, many of whom were still in their teens or early twenties, wore helmets – many of which were soon to hang on wooden crosses.

Top hats were still associated with politics and politicians as late as the 1960s. Remember JFK and Jackie walking down the slush-covered driveway at the White House on inauguration day?

So indicative of the speed at which things change, that inauguration day was ten years after, yes after Reg Manning won the Pulitzer Prize for his editorial cartooning that he titled, simply, “Hats.”

Postcard collectors who have centered on comic art of the Old West will certainly recognize the names of men like Owen Arnold, Lon Megargee, Charles M. Russell, Dude Larsen, and their Canadian colleague John Innes. But before any comparative conversation begins, Reg Manning and his Reg Manning – Travelcard series that he started in 1941 must be introduced as an artistic standard.

The “travelcard” series, as can be best determined by collecting one-by-one, was issued twice by Curteich, of Chicago, one with red borders and subsequently with white borders in 1941 through 1948. Most of Manning’s cards featured humorous situations that were sure to happen when tourists from buxom young ladies to inept paratroopers found themselves in the desert of the “colorful southwest.”

If there is a collector who knows for sure the number of Travelcards Manning made, Postcard History would like to announce your findings. In the meantime we estimate the total to be 34.

Here are some fine examples. 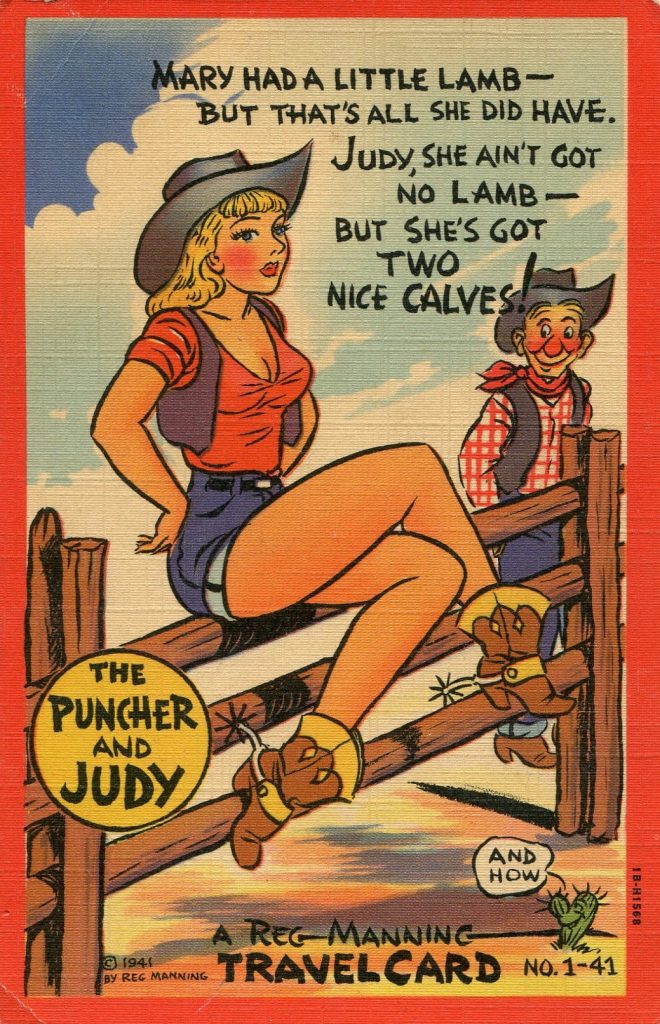 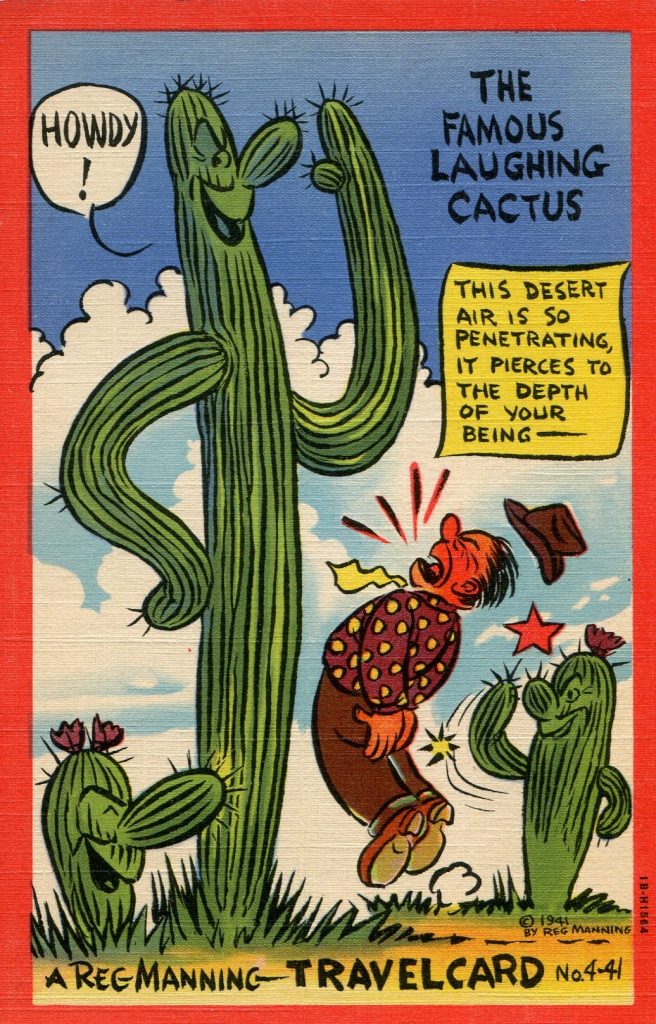 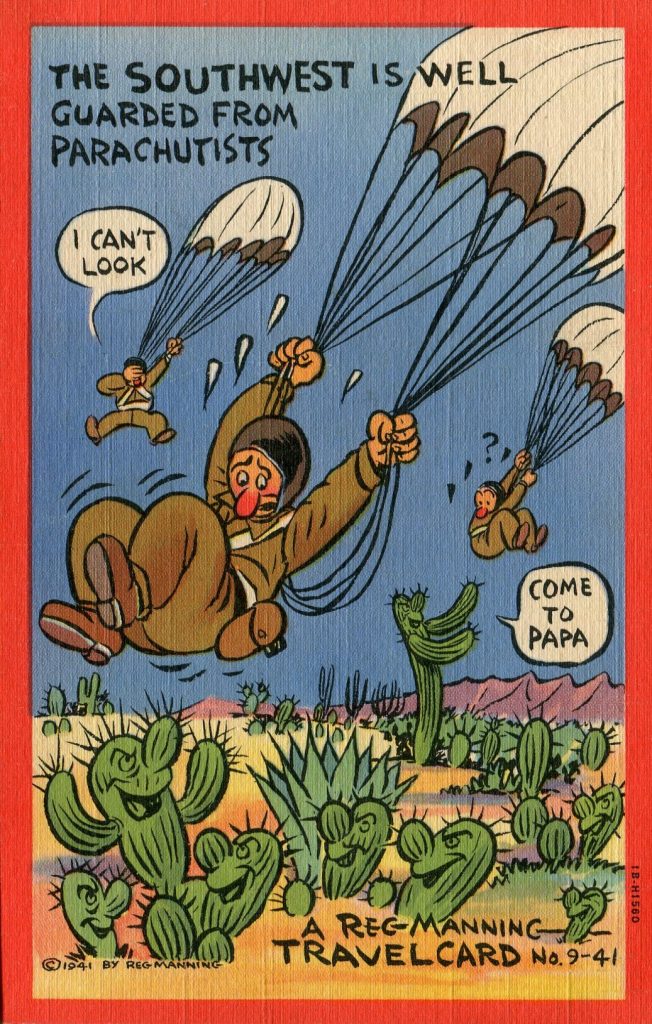 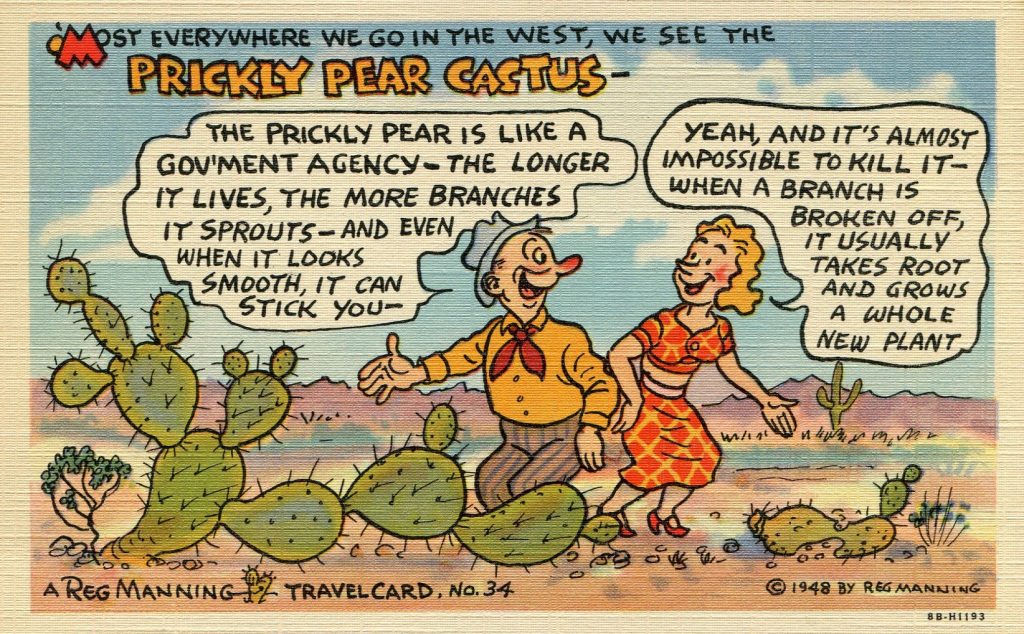 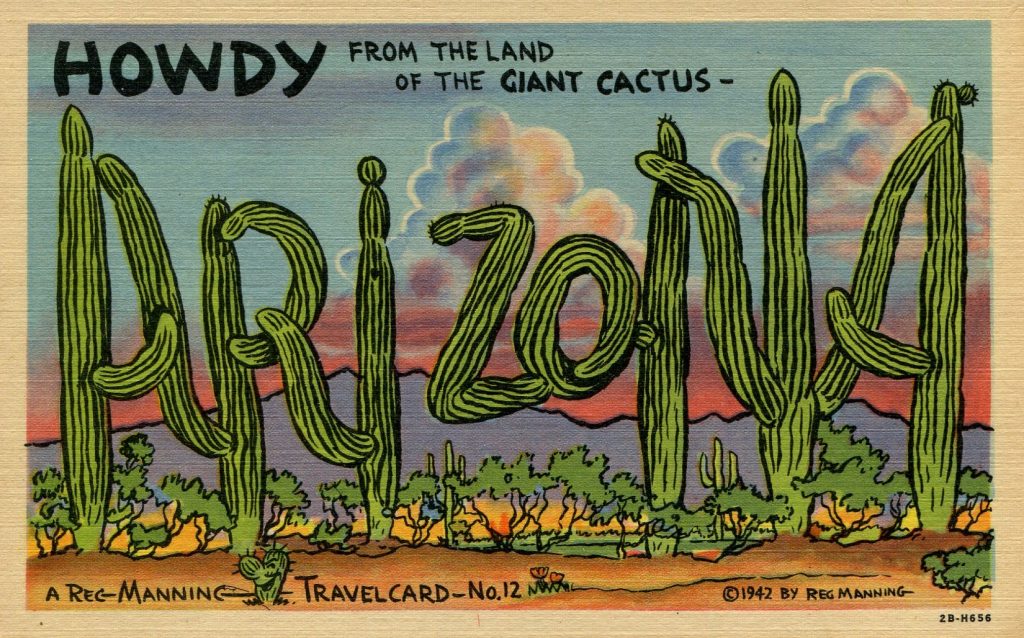 For some very entertaining reading, search some of the Internet’s rare or used book websites for any of Reg Manning’s books. Especially entertaining is, WHAT KINDA CACTUS IZ ZAT? WHO’S WHO IN THE DESERT: THE FAMOUS CACTUS BOOK.

Ellie McCrackin is a pen-name used by one of America's foremost archivists. Preferring to remain in the background, Ellie ghost writes for some of the leading world historians. She loves postcards and loves to write about the stories they tell.
PrevPreviousCrater Lake, Oregon – the genesis of many strange and unusual tales
NextClarence Coles Phillips and Negative SpaceNext
4 Comments
Oldest
Newest Most Voted
Inline Feedbacks
View all comments
Bob Kozak

It’s a shame Manning’s name is all but forgotten today.

Some good chuckles here. Thanks

I am the proud owner of several of the Reg Manning Travelcards. Always on the hunt to add more. Enjoyed the article.

Arizona State University, in Tempe, holds his collection and is divided into three sections. There are 376 boxes which cover 70 linear feet. Majority contain his original cartoons which appeared in the Arizona Republic (Phoenix) from 1964-1981. Syndication had a reach of 179 newspapers. Search of their web site found no distinction of postcards.