When I was a kid, the only word we used to surrender was UNCLE! And then even with your arm being twisted behind your back, your opponent would ask, “What did you say?” So you screamed, “UNCLE” again and again.

I have no idea what brought “uncle” to mind, but the time as come to deal with the obvious and report on the card you see below. There are literally dozens of these cards floating around every postcard event. If you have never seen it before, I have two words for you – “Pay attention.” 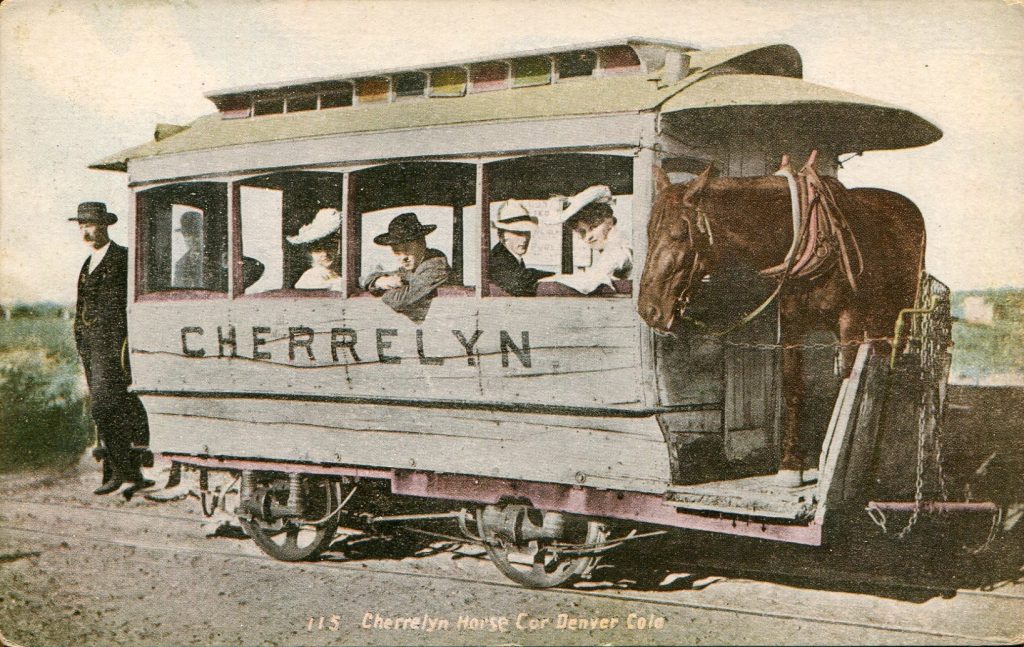 The image on the card is the “Cherrelyn” Horse Car. Really! There are hundreds of cards showing this somewhat unusual railcar. Black & white renditions are most abundant but there are others tinted in nearly every color of the rainbow: maroon, pink, blue, green (green was a favorite), yellow, celery, mustard, white, and nine shades of grey.

Most are printed cards but some are real photos. There’s even one that’s embossed. If you don’t have one in your collection, go to eBay and you will find nearly 100 to choose from. The prices range from $2 to over $20. The card from my collection (above) appears on eBay for $18.40, which I think is preposterous. If I paid over 50¢, I think I may have over-spent.

What is a Horse Car? I don’t know, but from endless minutes of research I have learned that it seems to be a very popular and romantic form of amusement-transportation unique to the city of Englewood (although most of the captions say Denver), Colorado. There is even a full-fledged blog on the Horse Car sponsored by the CERA – Central Electric Railfan’s Association.

Please – don’t take my words as hyperbole. No self-respecting postcard collector would poke-fun at a railroad rider. (Except perhaps if his name was Sheldon Cooper.) That said, I quote the two opening paragraphs of the CERA blog:

No doubt you’ve heard of the “Streetcar Named Desire,”
but what about a horsecar named Cherrelyn?

Perhaps the most photographed and fondly remembered horsecar line of the 19th century ran from 1883 to 1910 in Englewood, Colorado. Horses pulled passengers about one and a half miles uphill, and then the fun began. For the much faster trip downhill, the horse boarded the car via a wooden ramp, and rode back along with the passengers.

An early newspaper advertisement claims that your visit will remain incomplete if you miss a ride on this “only gravity system railroad in the world.” A round trip is only ten cents and you are encouraged to watch the horse during the return trip to appreciate how much he likes the ride downhill. The ad includes the owner’s name: M. C. Bogue.

Marcus Cook Bogue, I suspect the first to be awarded the name, was the forefather of a large family of Bogue’s who lived in a variety of mid-west and south-west cities. When the lights went out the other night, I was reading about a trust-fund administered by Marcus C. Bogue III. Parenthetically, it was paying-off at 1.667% – net return $25,000.

M. C. Bogue III’s grandfather was a real-estate developer through the west. The Denver suburbs was not his first project. The horse-car operation, according to newspaper accounts opened in 1892 (not 1883 as stated in the CERA’s blog) lasted for eighteen years. It was just one of many dalliances in which Bogue invested!

Report, complete! I can now file my Cherrelyn Horse Car card. It’s been pushed back and forth across my desk for more than a year. Uncle!  UNCLE!!  U N C L E!!!

Ray Hahn is a retired educator, but he has never stopped teaching. His decades of researching, writing and editing a newsletter for the South Jersey Postcard Club has been a world-class education in trivia. In addition to postcard collecting, Ray’s other interests include history, genealogy, and touring the world with his wife Marie. Ray often advises his readers to "Join me as we explore the world one postcard at a time." Ray and Marie live in New Jersey.
PrevPreviousTURNING THE TABLES – It’s Deer Season
NextGreetings from … the State CapitalsNext
2 Comments
Oldest
Newest Most Voted
Inline Feedbacks
View all comments
Bob Kozak

I don’t recall seeing any Cherrelyn cards in “the wild”, but I’ll be on the lookout next time I attend a show.

Those must have been very calm and patient horses to get on that car. Maybe they just liked the ride?