Don Quixote
in the XXth Century 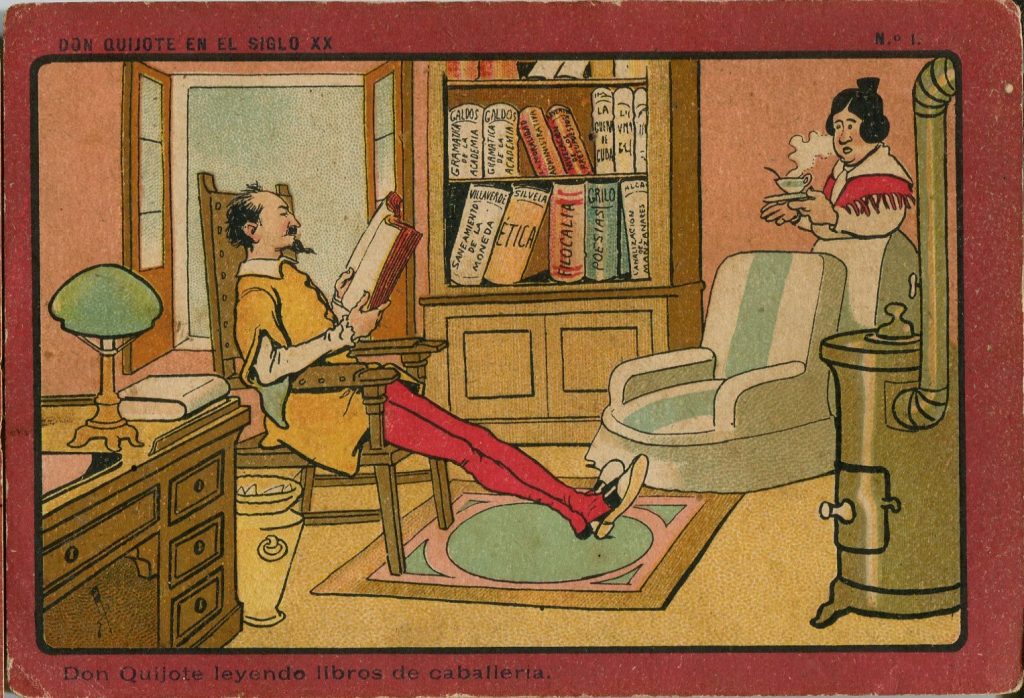 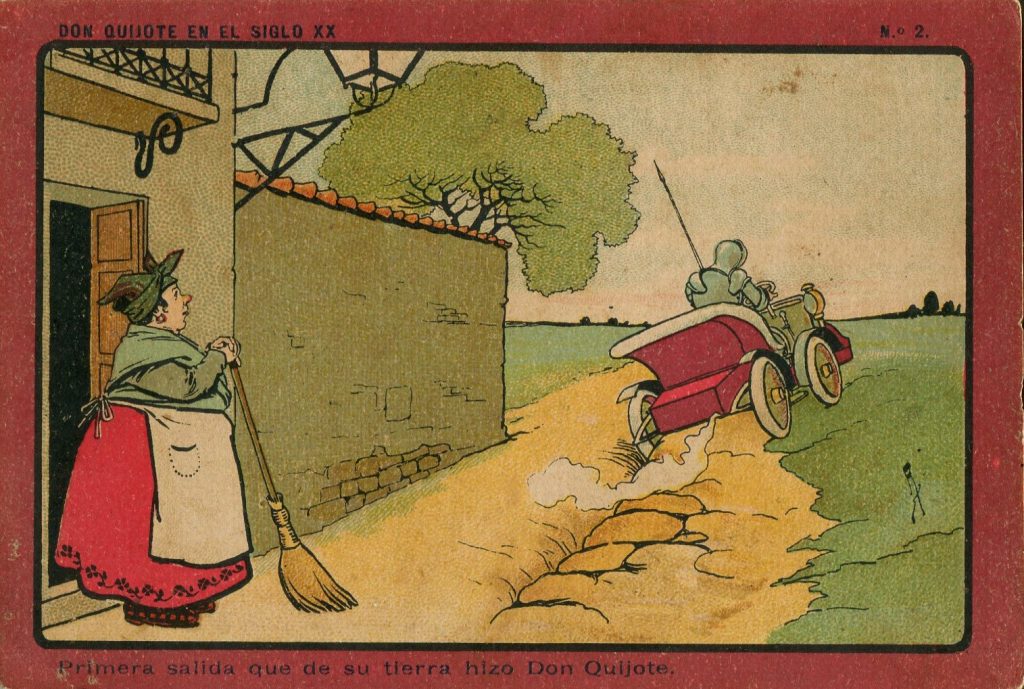 This 25-card set is an early twentieth century issue from Spain. In fact each card is a 5” x 3½” TARJETA POSTAL – UNION POSTAL UNIVERSAL – ESPAÑA.” The stock is sub-standard to that used in other countries at the time. It is quite prone to foxing and it is literally paper thin. Not all but most of the images are signed, but with an indecipherable mark that may consist of an F, an L, and an X. 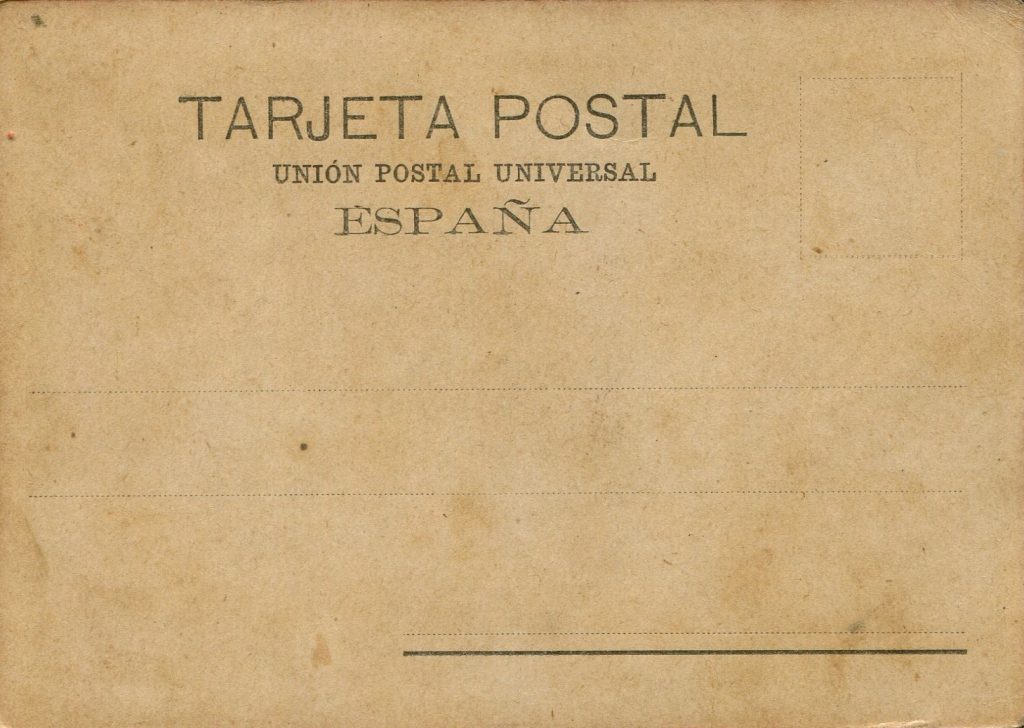 The characters are well drawn with a lot of detail in the faces, so too are the scenes, objects, and animals. The titles are in Spanish.

The name Miguel de Cervantes should be familiar to all who have studied modern Romance language literature. Cervantes was born (assumed from his writings) in 1547. He died in the spring of 1616 at Madrid.

Since his death a wreath of accolades has been heaped upon him, many for good reason, but often with exaggeration. There are those who consider him the greatest writer ever in the Spanish language. He has also been called one of the world’s most distinguished novelists. His most celebrated work is the novel Don Quixote (1605).

[Note to collectors: The card of Miguel de Cervantes (left) is a Levi by Neudrein, Paris, #285.]

[Sidebar for Tuck Collectors: The image of Don Quixote seen here is from the Heroes and Heroines of Fiction, Set #2140. It is one of the few Tuck’s sets compiled for the 1908 catalog using the artwork of six different artists. The Don Quixote card was drawn by Dudley Hardy. Other images in the set were done by Stampee, Linsdell, Caton-Woodville, Oscar Wilson, and John Hassal (although the name Hassal is spelled incorrectly with an “e”.)] 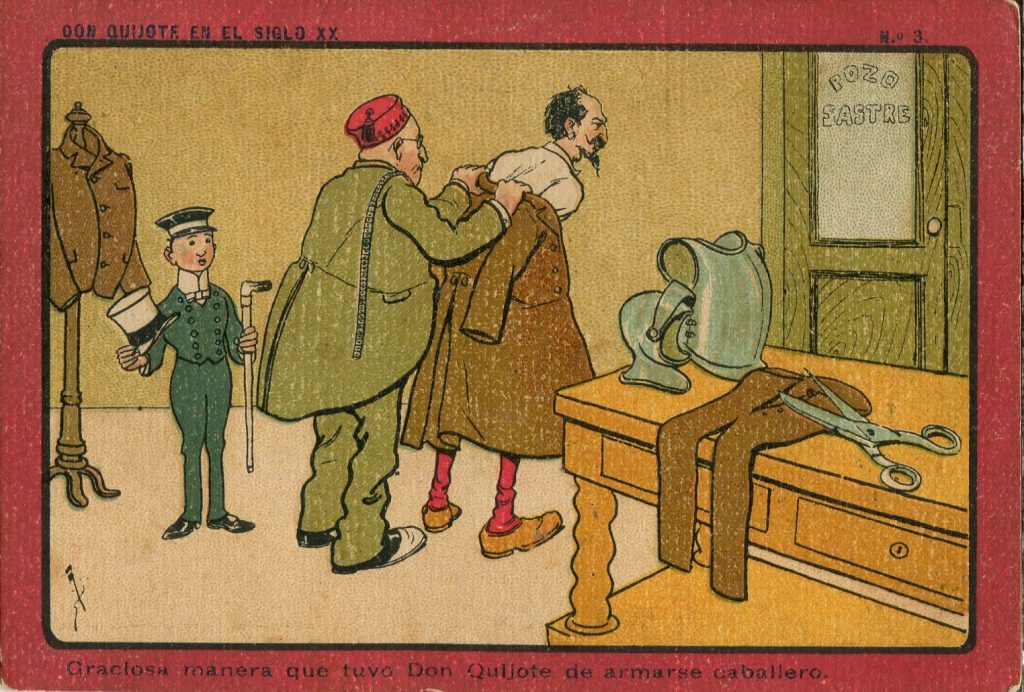 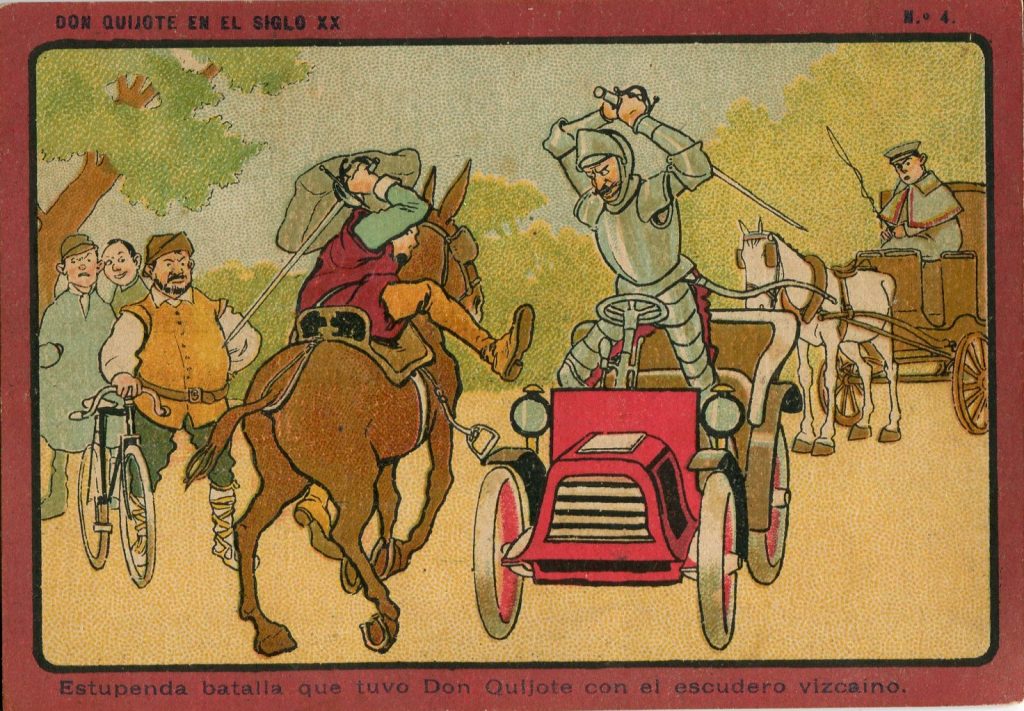 The number of translations of Cervantes’ novel varies among sources but the highest is 77. The ink of the first edition was barely dry when the Irishman Thomas Shelton did the first English version in 1612.

Poverty and obscurity were the only fates known to Cervantes until the last few years of his life. Near and at the end of his life he enjoyed the support of the Count of Lemos, a small village in the Galician region of northwestern Spain.

Don Quixote has not only enjoyed numerous translations into languages from around the globe, but it has also been the object of transmutations to at least six other art forms: fine art, ballet, sculpture, stage, film, and music and opera.

The following summary is much abridged, from the Encyclopedia Britannica. Postcard History wishes to concentrate on postcards but knowing bits of the story helps make sense of the images on the cards.

The work opens in a village of La Mancha, Spain, where a country gentleman’s infatuation with books of chivalry leads him to decide to become a knight-errant, and he assumes the name Don Quixote. He finds an antique suit of armor and attaches a visor made of pasteboard to an old helmet. He then declares that his old nag is the noble steed Rosinante. According to Don Quixote, a knight-errant also needs a lady to love, and he selects a peasant girl from a nearby town, christening her Dulcinea. 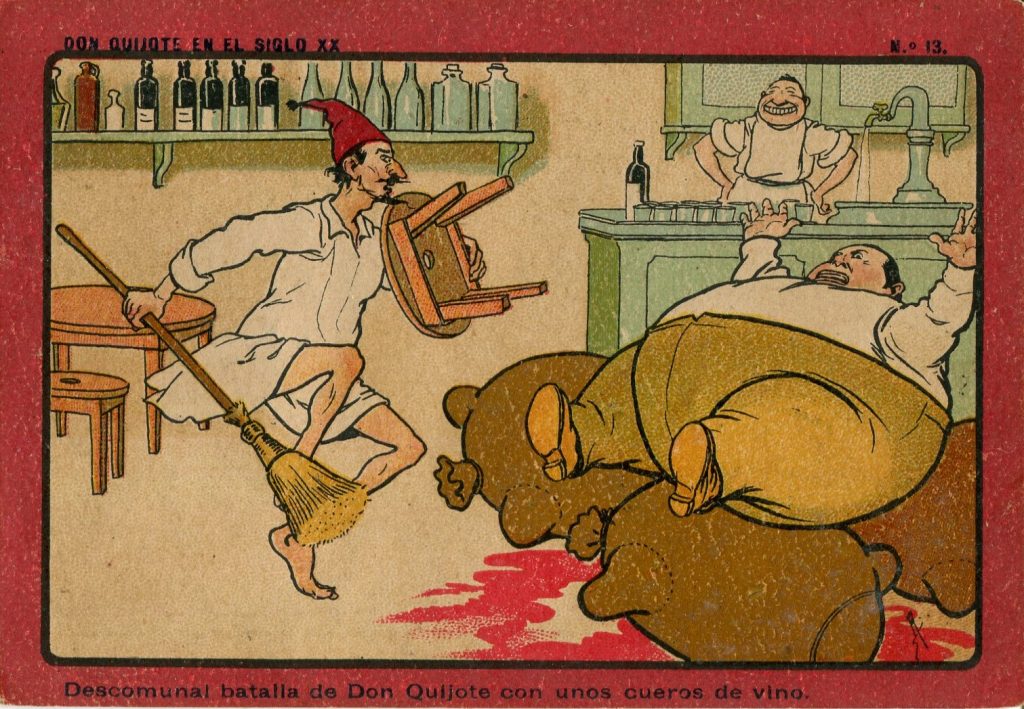 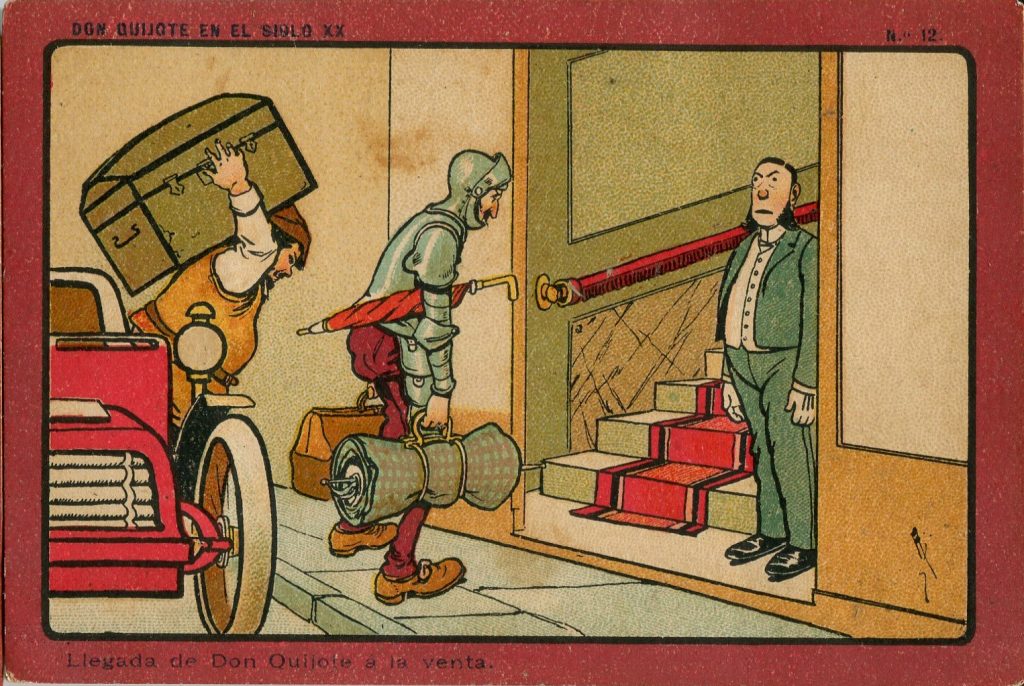 So outfitted, he heads out to perform deeds of heroism. He arrives at an inn, which he believes is a castle, and insists that the innkeeper knight him. [In his travels] he picks a fight [that does not end well] with a group of merchants, and they beat him. When he recovers, he persuades the peasant Sancho Panza to act as his squire with the promise that Sancho will one day get an island to rule. 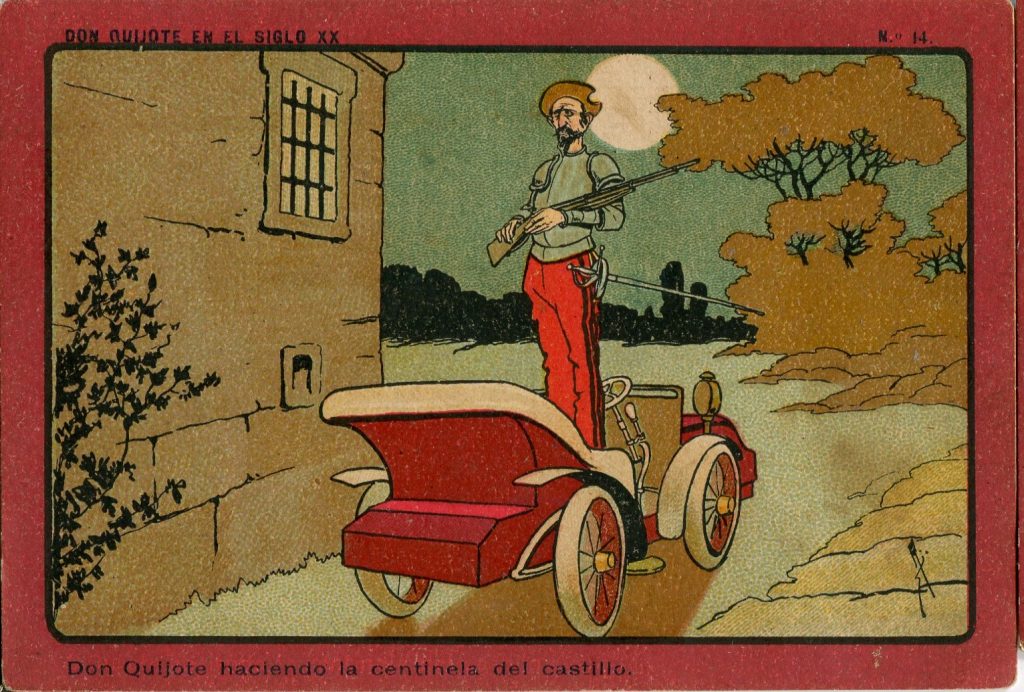 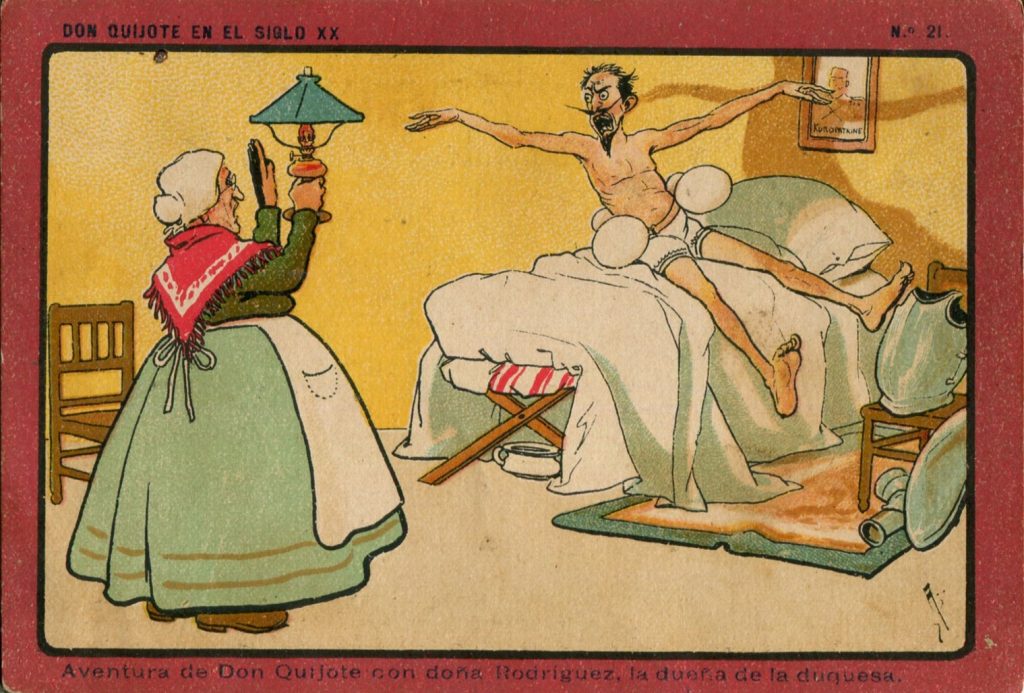 Don Quixote and Sancho, mounted on a donkey, set out. In their first adventure, Don Quixote mistakes a field of windmills for giants and attempts to fight them but finally concludes that a magician must have turned the giants into windmills. He later attacks a group of monks, thinking that they have imprisoned a princess, and also does battle with a herd of sheep, among other adventures, almost all of which end with Don Quixote, Sancho, or both being beaten. Eventually, Don Quixote acquires a metal washbasin from a barber, which he believes is a helmet once worn by a famous knight, and he later frees a group of convicted criminals. 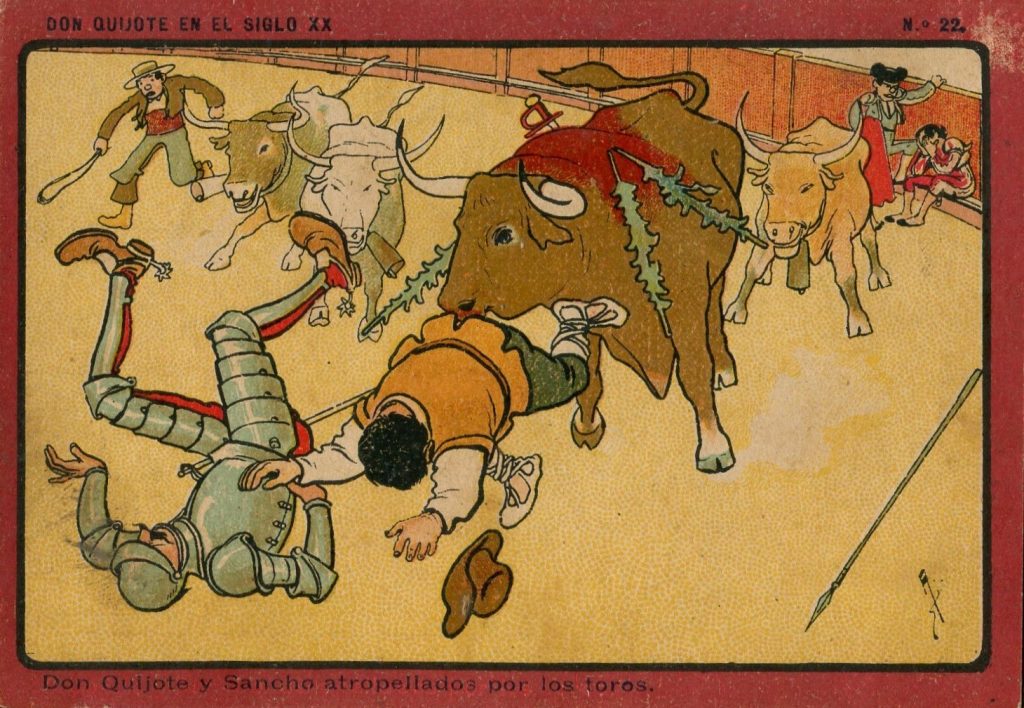 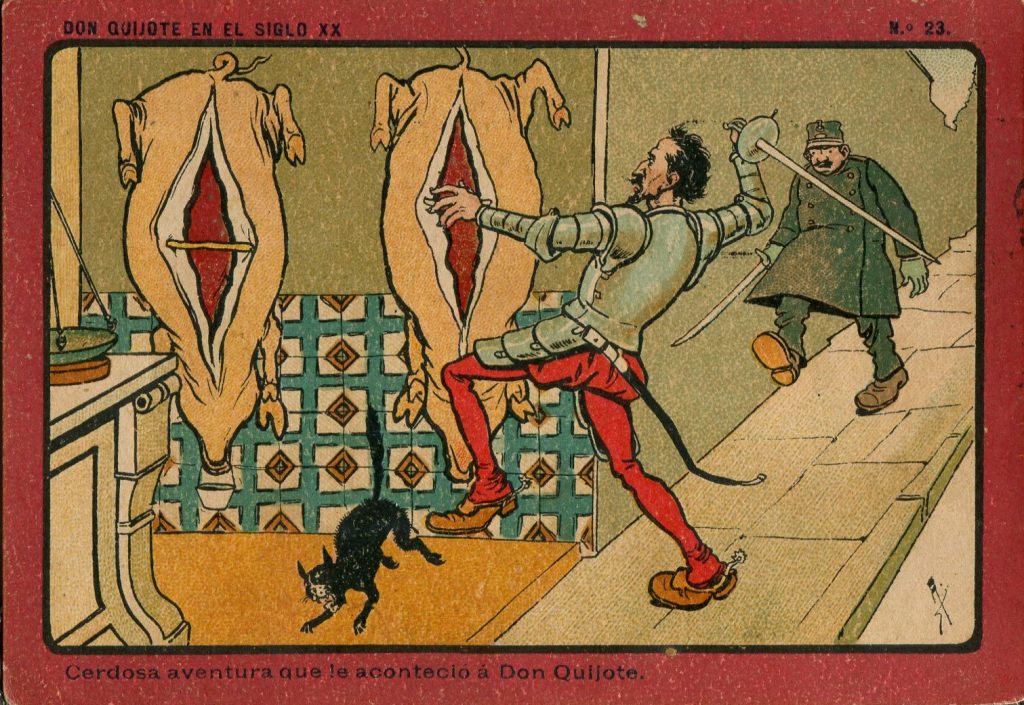 Don Quixote subsequently encounters Cardenio, who lives like a wild man in the woods because he believes the woman he loves betrayed him. Don Quixote decides to emulate him to prove his great love for Dulcinea, and he sends Sancho to deliver a letter to her, but when Sancho stops at an inn, he finds two of Don Quixote’s old friends, a priest and a barber. They decide that one of them should pose as a damsel in distress to lure Don Quixote home. They find a young woman who agrees to pretend to be a princess whose kingdom has been seized by a giant, and Don Quixote is persuaded to help her. Later, the priest and the barber put Don Quixote in a cage and persuade him that he is under an enchantment that will take him to Dulcinea. Eventually, they return him home.

Other adventures that include a visit to Barcelona ensue. Following various adventures there, the Knight of the White Moon (a student from La Mancha in disguise), challenges and defeats Don Quixote who under the terms of the battle if defeated must return home. 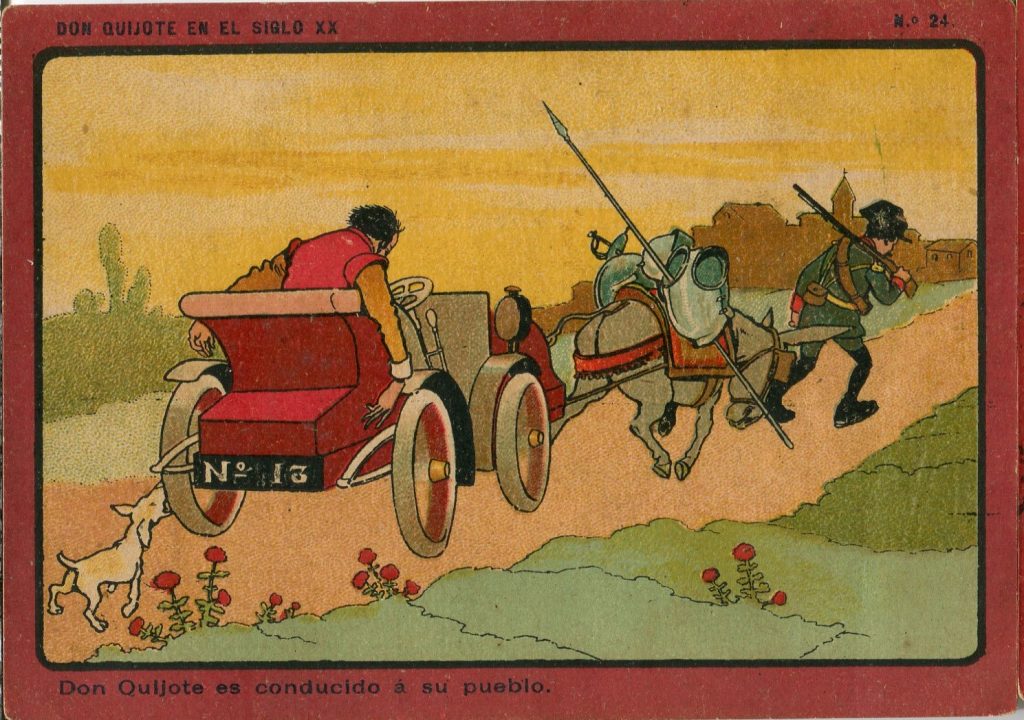 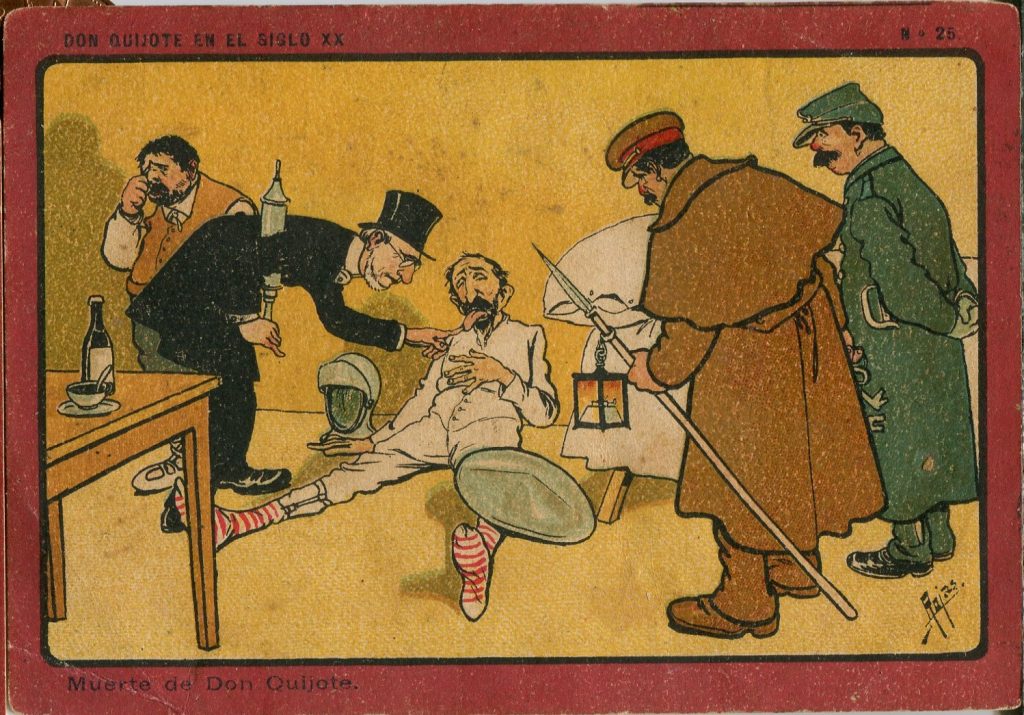 History in every society has a hero working against injustice. Don Quixote was just another hardworking guy trying to make the world a better place. Although he enjoyed little success that should never detract from his efforts.

The title of this set Don Quixote in the XXth Century may seem peculiar to an American’s eye, but even in modern times when numeric adjectives are used in Spain, they are often written using Roman numerals. Only a few years ago, I flew into Barcelona airport, rented a car, and headed north over the Pyrenees Mountains toward France. After an hour in an attempt to find my way to Route 11, I stopped a young college student and asked for directions. He was unable to help me until I showed him a map and pointed to the road I wanted. He gave me a wide-smile, and said, “Oh, you’re not looking for route 11, you’re looking for route 2.”

Ray Hahn is a retired educator, but he has never stopped teaching. His decades of researching, writing and editing a newsletter for the South Jersey Postcard Club has been a world-class education in trivia. In addition to postcard collecting, Ray’s other interests include history, genealogy, and touring the world with his wife Marie. Ray often advises his readers to "Join me as we explore the world one postcard at a time." Ray and Marie live in New Jersey.
PrevPreviousThe 1964-1965 New York World’s Fair
NextTanglewoodNext
3 Comments
Oldest
Newest Most Voted
Inline Feedbacks
View all comments
Bob Kozak

I remember reading a very abridged version of the novel for my Spanish class in high school.

“His most celebrated work is the novel Don Quixote (1605),” you write.. but Cervantes did not write the DQ! You can read my investigation: the deciphering of the Don Quixote & the unmasking of Avellaneda, 2022. At the back you can read: The original “Don Quixote” is an English book. The Spanish translations appeared in 1605 and 1615, much earlier than the original English publications in 1612 and 1620. Between these two periods, in 1614, a “false” Don Quixote was published under the name Avellaneda. The original English text was never released.   Francis Bacon was the brain behind the three books… Read more »