Do I have them all?
How would I know?

So, my fellow collectors, here is the dilemma. When do you stop looking for the last card(s) in a set? Do you pick a new collecting topic and hope that someday the missing card will appear from thin air? Do you say to yourself, I really don’t need that last one, I’ll just enjoy the ones I have.

There is always beautiful scenery when you live on a lakeshore. All four seasons are lovely, but there is one problem – there is only one serious postcard show in Minnesota.

The annual show in Egan is the best we have. A few years ago, I bought two postcards that illustrate the songs Auld Lang Syne and Rock of Ages. Since then, at other shows and online, I have found eight more. That makes ten. Do I have all of them?

I have not counted the number of people I have asked about these cards, but many collectors, dealers, and other postcard “authorities” have been unable to enlighten me. No one knows anything; not even the publisher’s name. If there are no more, how would I know to stop searching?

The songs are all special to me. They are the songs I heard as a young girl back east. In the hills of Maryland, in the 1940s and 1950s, Christian Revival meetings were common. My parents took me to those meetings, and they loved to sing. That is why I like these cards; each one leads down a different memory lane.

Auld Lang Syne is a traditional song around the world. It is often heard at the stroke of midnight on December 31st – New Year’s Eve – when bidding farewell to an old year. It is also sung at graduations, retirements, and funerals.

Ave Maria may be the second most popular song after Happy Birthday. Composed by Franz Schubert in 1825 as “Ellen’s Third Song,” it was one of seven songs meant to go with the narrative poem, The Lady of the Lake by Sir Walter Scott. It is not a religious song, but the churches have adopted it as a means of praising the mother of Jesus. Ave Maria sends chills down the spine of anyone who hears it.

The melody of “Columbia, the Gem of the Ocean” is the same as the British song “Britannia, the Pride of the Ocean” which is thought to have been composed around 1843. When it became an American patriotic song with new lyrics in the late 19th century no one could tell which song begat the other. When it made its way to America as Columbia the Gem of the Ocean it was frequently used as an unofficial national anthem.

Dixie Land, includes the phrase, “I Wish I Was in Dixie.” When I was a kid, whenever this was sung in public someone in the crowd would yell, “I wish you were in Dixie, too!” or “Then, get going.” Everyone would laugh, but no one left the room. The song is about the southeastern United States. It may have first appeared around 1859 as a folk tune and it is given credit for the word “Dixie” becoming part of American slang.

In the Gloaming. “Gloaming” is an ancient word for dusk or twilight. In the 1950s it was a popular tune sung by Jo Stafford and Gordon MacRae. The lyrics help a listener conjure up thoughts of aging and being elderly lovers who are anticipating their future.

Killarney is a song dear to the hearts of those who came to America after the potato famine. The lyrics reminisce over the part of Ireland around County Kerry and the city of Killarney. Killarney sits on the shore of Lough Leane, a place of much lore and love.

Lead Kindly Light is an English hymn. The lyrics were written as a poem in 1833 by Saint John Henry Newman. The poem Pillar of the Cloud was first published the following year in a publication called the “British Magazine.” As a young priest, Newman became sick while in Italy and was unable to travel for almost three weeks. In his own words he wrote about his poem, “I have a work to do in England. I was aching to get home, yet for want of a vessel I was kept at Palermo for three weeks. I began to visit the churches, and they calmed my impatience, though I did not attend any services. At last I got off in an orange boat, bound for Marseilles.”

Rock of Ages is a Christian hymn with lyrics fit for a male tenor. The melody is quite slow in tempo and the tune lingers in memory. Back in those early years I mentioned, the rock of ages hymn was a favorite of Billy Graham’s sidekick George Beverly Shea. In an interview conducted on national television, Billy Graham said of Bev Shea that, “he doesn’t really sing songs, he sings sermons.”

The Village Blacksmith is a song inspired by “The Village Blacksmith” a poem published in 1840 by Henry Wadsworth Longfellow. In the poem Longfellow describes a blacksmith as he goes about his daily routine. He is portrayed as a role model who leads his life as a family man and a member of society through his job. There is a fanciful legend that tells how a tree mentioned in the poem was cut down and a chair was made from its lumber. The chair was presented to Longfellow by the local schoolchildren, and he treasured that chair for the rest of his life.

The world’s most famous wedding march is the one heard at about ninety percent of all weddings in western civilizations – Mendelssohn’s Wedding March from “A Midsummer Night’s Dream.” Mendelssohn composed two pieces often used as wedding marches, one in 1826 that through the years has come to be considered the very first concert overture. It is his second effort in that genre that is his famous wedding recessional.

Please do not confuse Mendelssohn’s wedding recessional with Wagner’s “here comes the bride” which is heard at the beginning of Act III of the opera, Lohengrin. Composed in 1850, Here Comes the Bride,” has become the world’s most popular bride’s processional. It is most appropriately played on a pipe organ, an instrument favored by Wagner.

Now that you have read about these songs, perhaps you know why I would like to find more of these cards.

Edith Romaine has collected postcards from hotels and restaurants since 1995. She sorts her hotel cards into three categories: Haunted, Non-haunted, and Not Sure. The “haunted” hotel cards outnumber the others 2 to 1. Edith lives on the shore of a Minnesota lake.
PrevPreviousOccupations on Postcards – Men at Work – Part I
NextOccupations on Postcards – Part II – Women at WorkNext
10 Comments
Oldest
Newest Most Voted
Inline Feedbacks
View all comments
Bill Burton

Here’s “Maryland My Maryland,” until 2021 the official state song of Maryland. The title and the background are embossed, though the lyrics are not. On the front of the card is the publisher’s copyright statement “Copyrighted by Chas. Rose, 1908.” There’s a printer’s mark on the back and “Series 11/6” to its right. It was mailed August 5 but the year cannot be read. The song was abandoned in 2021 because its 1861 lyrics were pretty clearly supportive of the Confederate side of the Civil War. The sixth verse includes the phrase “Sic semper,” a reference to Virginia’s motto “Sic… Read more » 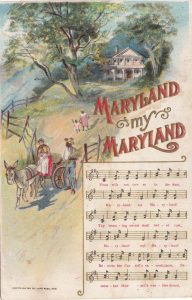 In addition to the two mentioned earlier, eBay also contains Marching Through Georgia, The Girl I Left Behind Me, Old Oaken Bucket, Home Sweet Home, Hail Columbia, Yankee Doodle, Comin’ Thro’ the Rye, My Country tis of Thee. That accounts for 20 of the 24. I agree, a really nice series.

Wonderful article, and the thoughts of “Do I have them all?” are so interesting!
My brother the stamp collector and I discuss our hobbies often — in his world, they ALWAYS know if they have them all, because every stamp is issued by a government and is catalogued. I think that’s less exciting. Knowing that there always might be one more postcard in a category I collect is what keeps me going!

I guess that answered the question of how many, next is What Are They. Some days I remember questions like this and when I hit the local antique shop that specializes in postcards, I can ask him or search. Has someone started a checklist for this series?

I read this article with much interest as I too collect ‘song’ postcards. The series I collect were published by L & G of Glasgow between 1902 and 1904 and are titled ‘Popular Songs Illustrated.’ I enjoy the ‘hunt’ for more cards from this series although I now have 40 cards although I have no knowledge of how many more exist. I know of at least another half dozen I have seen…although these are not available for sale.I will admit to starting to collect song cards issued by other publishers and asking myself “Where does it end?”

I have collected Bronx NY postcards since 1973 and realize that I will never see all that was published before 1940. However, Doubleday published 15 RPPC’s, 13 that I own of Tex Austin’s Rodeo at Yankee Stadium in 1923. One way to add to the collection is write an article on the specific topic and challenge all collectors to identify others. I responded to an article listing the Doubleday postcards, after getting leads on 2 postcards unknown to me. One other way is the help I get from my friends at the Taconic Postcard Club. 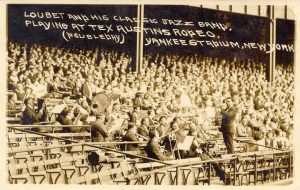 I live in “postcard show heaven”…a 2 hour drive to York (largest show in US), less to Lancaster, and 1 1/2 hours by train to NYC. However, if it’s not on eBay over a one year time-frame, good luck finding it. Even with these big shows, 90% of my postcards come from eBay. However, most have been over $10. each. Shows are the way to go for less expensive cards, due mainly to postage costs.

I’m familiar with the poem “The Village Blacksmith”, but had no idea it had been turned into a song. A common misconception is that “smithy” refers to the blacksmith himself — it actually signifies his shop.

Much to share but too much to write here. Please email.