When Gordon Hope Grant died on May 7, 1962, one month short of his 87th birthday, he left behind a legacy of seventy-four years of service to his art and his country. In his lifetime he was widely known for his paintings of marine topics and marine-history – his specialty was the U.S.F. Constitution. Artworks by Grant have been seen in the White House, the Metropolitan Museum of Art, the New York Marine Museum, the New-York Historical Society, the Library of Congress, and the United States Naval Academy. 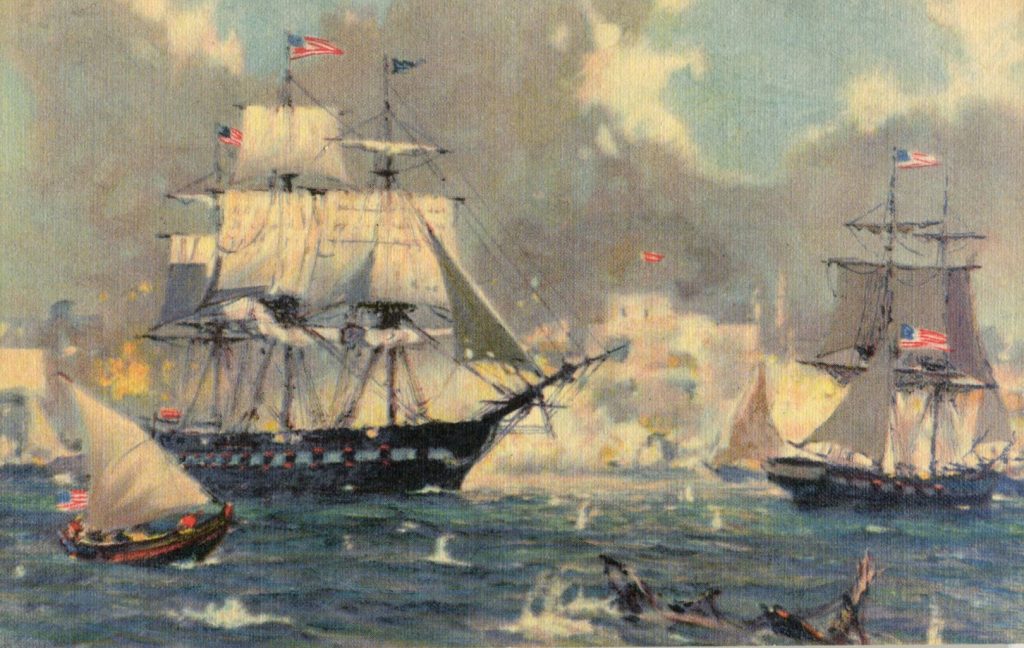 Grant was the son of a San Francisco bank cashier. His father was determined that Gordon would get the finest art education available and sent his son to Scotland at age 13 to study in the academy in Kirkcaldy, Scotland and later at other art schools in London and New York. After graduation he earned employment at the New York World and the New York Journal. In 1899 Harper’s Weekly sent Gordon to South Africa to cover the Boer War as a special artist. During World War I, he served as a Captain in the U.S. Army at the general staff office in Washington, DC.

After 1920 he devoted his time to writing and illustrating books of his own and others as well as working regularly for the Saturday Evening Post and Boy’s Life.

The Constitution was launched at a cost of $302,718 in October 1797. It is the only ship from that era still in active service. Grant’s painting of the U.S.F. Constitution (above) shows the ship in the harbor at Tripoli, the capital of Libya, as it served from 1803 to 1805, as the flagship of America’s Mediterranean squadron. She played a leading role in our conflict with the Barbary states and the treaty of peace was signed in the commodore’s cabin. 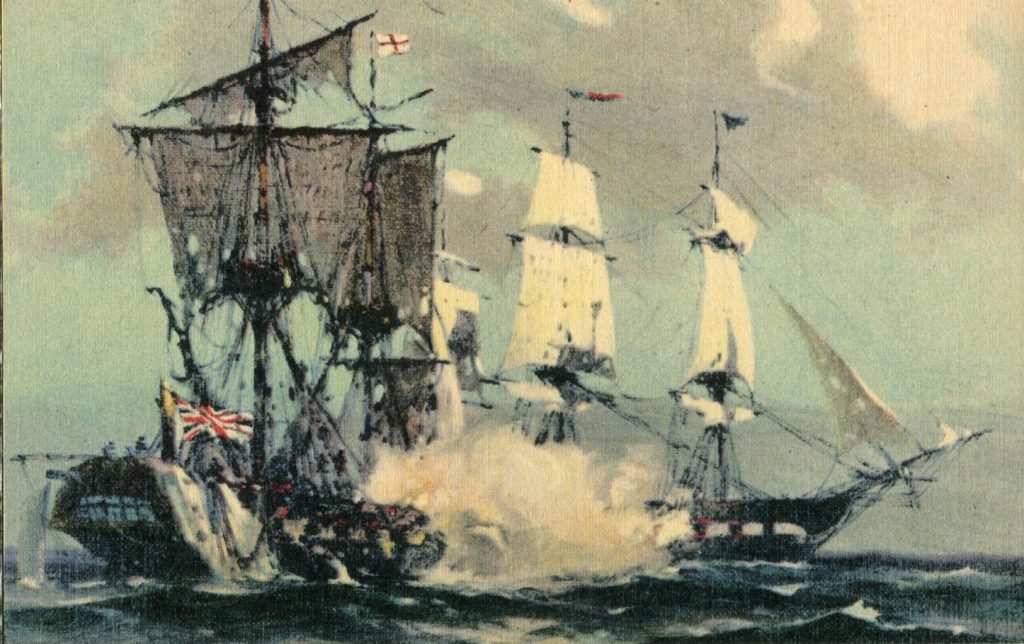 On a patrol mission off the coast of Nova Scotia, in the afternoon of August 19, 1812, Captain Isaac Hall was informed the British frigate H.M.S. Guerriere had been sighted. Within an hour Guerriere had closed to within one mile and raised their colors and fired on broadside. The shot fell short. A request to return fire was refused by the captain but when Constitution soon slid alongside her opponent, Captain Hull gave the order to fire, and a bloody battle ensued.

During the battle Guerriere’s cannon seemed useless against Constitution’s thick white-oak hull. One American sailor was heard to say, “Huzza! Her sides are made of iron.”

Three officers fell from enemy fire during that fight, but in the end, Guerriere was so severely damaged that the only option was surrender. The next morning, with British prisoners aboard, the Americans set sail for Boston. They arrived on August 30th to hear the crowds cheering for the Constitution and Captain Hull. Awards followed and the ship had a new nickname: “Old Ironsides.” 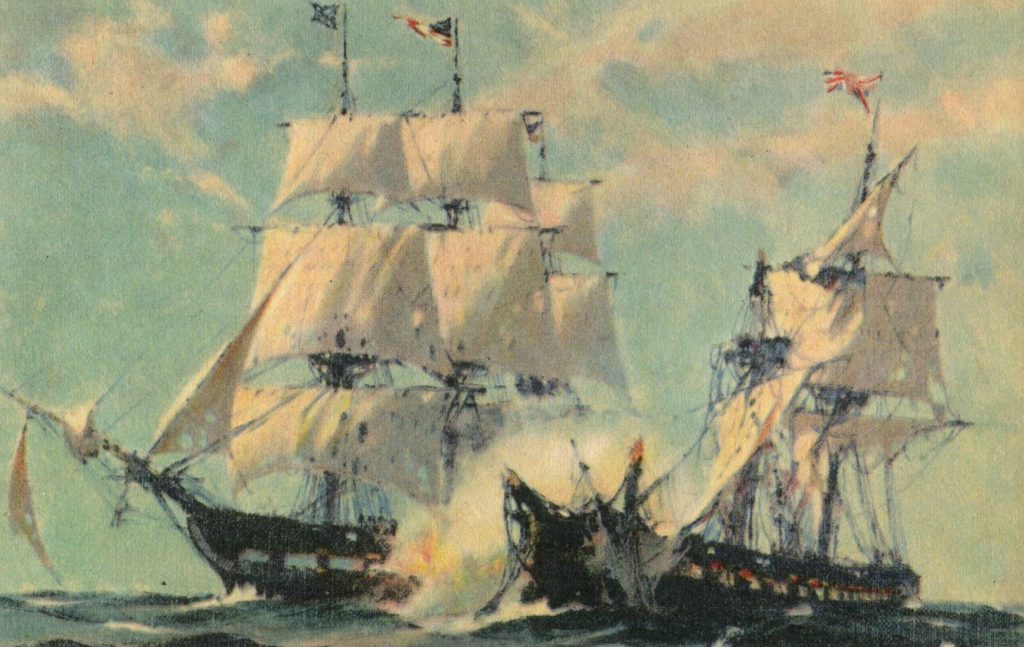 The morning of December 29, 1812 was warm and sunny. The Constitution was cruising off the coast of Brazil when the masthead watchman sighted two ships on the horizon. The larger of the two ships was H.M.S. Java. The Americans were the first to fire, but the crews missed their mark, making it possible for Java to come alongside Constitution and then turn under the stern and fire their weapons. Their shot wrecked the wheelhouse, and four sailors were killed.

It appeared that the British had the upper hand but as Java was about to ram Constitution an American shot toppled their foremast and the boarding attempt failed. Because the damage was complete the British surrendered, marking Constitution’s second victory of the war.

During the next six weeks Constitution struggled back to Boston, but when the news of the battle reached the British Admiralty, they issued orders that no future encounters would occur against the Americans. In July 1813 British captains learned that they were forbidden from engaging American frigates. 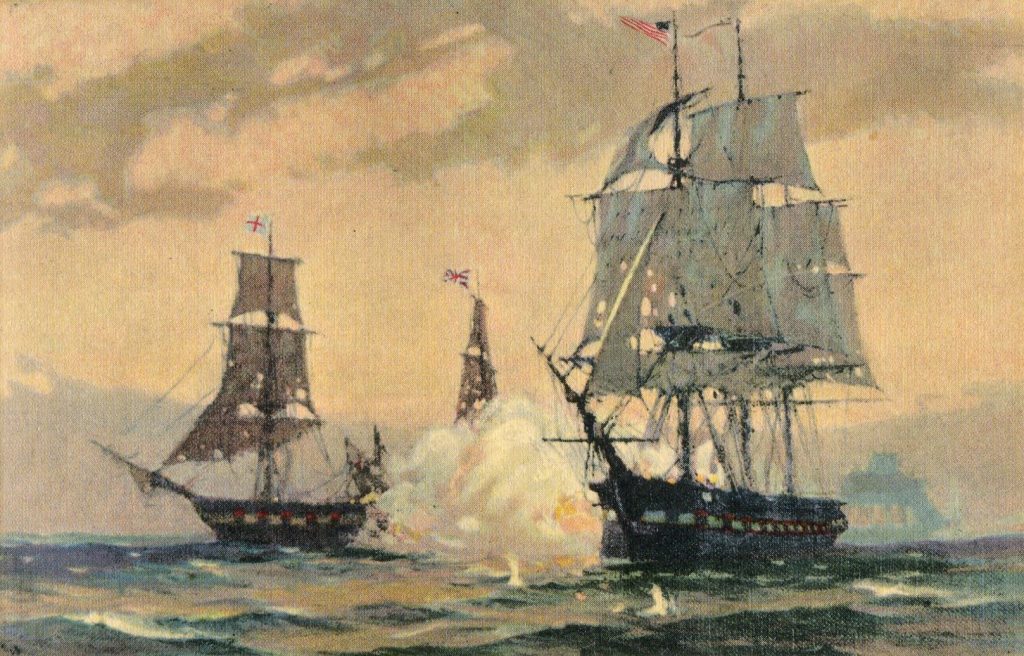 On Christmas Eve 1814, the Americans and their British adversaries signed the Treaty of Ghent, ending the War of 1812. The end of hostilities was to be February 17, 1815, but the news had not reached the Constitution, which was three thousand miles away in the North Atlantic.

On February 20, 1815, the Constitution was near the island of Madeira off the west coast of Portugal. Around 1 o’clock the masthead lookout saw a large ship sailing toward them from the northeast. An hour later a second ship was seen a little to the west. The two ships were the H.M.S. Levant and the H.M.S. Cyane. By 5:00 the three ships had closed on each other, and Constitution’s Captain Charles Stewart ordered two guns to fire as a test of their range. By 6:00 the British shorted their sales and Cyane fell in line behind Levant, a maneuver that doomed both vessels.

Constitution had a windward advantage that day; she blocked the wind that the other ships needed to move within the range of their guns. It also meant that clouds of smoke would drift toward the British ships, preventing them from achieving a clear target. The battle with the Cyane lasted less than two hours; Levant surrendered just after ten o’clock.

Even with the two-on-one advantage it was hardly a fair fight. The Constitution’s guns and construction were far superior, and the Americans knew how to put those advantages to clever use.

The battles with the Cyane and Levant were the last battles the Constitution would see as an active combat vessel.

The postcards are products of Colorpicture Publication, Boston 15, Mass. USA.

The USS Constitution is currently in active service as a museum in Boston, Massachusetts.

Thanks so much for this very informative article! I learned much more about our oldest active and very historic Navy ship USS Constitution.

I have long known that the Battle of New Orleans took place after the war was officially over, but didn’t realize that Constitution had also been involved in a post-treaty skirmish.

Good article, I have many recent postcards depicting the USS Constitution. Interesting to learn this history.

When I toured The Constitution I wondered if sailors were shorter in those days. I had no problem but many people in our tour group forgot to duck at least once and left with bumps on their heads.