The Man and The Statue

Since 1894 a statue of Pennsylvania’s founder has been atop the Philadelphia City Hall. It is a bronze statue of William Penn by Alexander M. Calder. It was cast in fourteen pieces and is alleged to have taken nearly two years to complete. Many history books of Philadelphia contain a chapter on the statue and the lore that surrounds it.

POOR BILLY PENN, NO ONE LOVES HIM ANYMORE

Most history enthusiasts know that the British kings often deeded property they had no right to claim, to settle debts owed to noblemen who had every right to assume payment would come in a much more spendable form. Such was the case in 1681 when King Charles II paid a debt to one of his admirals Sir William Penn, a favored politician.

Sir William’s son, William Penn was the ultimate benefactor and when he learned of his new wealth, he set sail at once for the New World. He disembarked on his new homeland by sailing through the Delaware Bay and up the Delaware River to a landing just north of the Swedish settlements in what are now the states of Delaware and New Jersey.

Immediately, Penn’s settlement was a success.

In the 1850s, Alexander Calder was a boy in Aberdeen, Scotland. His first job was as an apprentice to the sculptor John Rhind. Rhind and Alexander’s father were fellow headstone cutters, and their combined reputations provided Alexander with the needed credentials to attend the Royal Academy in Edinburgh.

He left Scotland for London in the early 1860s and found work with the stone cutters who were constructing the Albert Memorial – Queen Victoria’s homage to her late husband.

Calder left London in 1868 for the United States, settled in Philadelphia, and continued his studies at the Pennsylvania Academy of Fine Arts. In 1873 John McArthur (the architect of record of a new city hall project) hired Calder to create models of the sculptures that would eventually adorn the new Philadelphia City Hall. The task for which he was hired included over 250 marble and bronze pieces that took twenty years to finish. Then he won the competition for the 37-foot-tall statue of William Penn, and it remains the world’s largest portrait sculpture atop a public building. 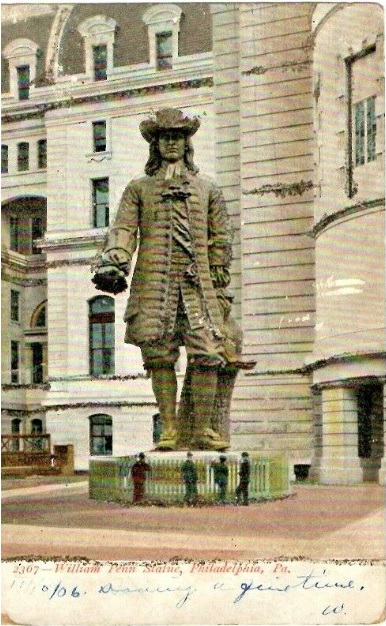 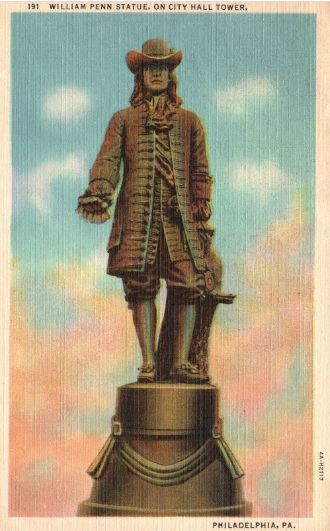 It seems that every ten to fifteen years along comes a new crowd of calamity-howlers who are bound-and-determined to re-wallpaper America’s history. Expressions of other opinions are welcome here, but general agreement should start with the fact that our history texts favor only Male WASPs (men who are white, Anglo-Saxton and Protestant). A fact that we should acknowledge and avow never to repeat. Rather than whitewash with economic, political, and social erasures, be thankful that significant progress has been made in the City of Brotherly Love.

Which brings us to a recent time when a Philadelphia Inquirer columnist came forward with a call to remove the statue of William Penn from city hall and delete his name from the commonwealth, thus creating the state of Sylvania.

The truth is Penn’s 17th century lifestyle, physical environment, business dealings, and social mindset would never match 21st century values and ideals. And, why would we expect that to be? Penn, like more than 85% of his fellow settlers, was a Quaker.

The Quakers, who are an unusual sect of protestants began their protest of slavery as early as 1684 when a cargo ship of black people arrived at a dock in Philadelphia. Slavery was never a common practice in Philadelphia, at the end of the 17th century only seven percent of Philadelphia families kept enslaved people. Penn was among them. It is alleged that Penn considered Africans to be more dependable than those who were indentured.

Those who were cargo on the dock that day in 1684 were destined for enslavement by wealthy whites, but despite their actions at the time the Quakers spent the next four years organizing the Germantown Protest.

From the Germantown Protest came the Germantown Petition – the first document from a religious body denouncing the enslavement of Africans in America. It was drafted by Francis D. Pastorius, a young German attorney and other Quakers for the Quaker Meeting they attended. It was based on the Golden Rule from the Bible: “Do unto others as you would have them do unto you.”

That petition was the first movement against slavery in the English-speaking colonies — but there would be another five decades of debate before they officially denounced slavery. All facts that cannot be denied.

Aren’t we a bit weary of these milquetoast histories?

The Staff of Postcard History offers this article for your enjoyment. It is a combined effort of many: our publisher, editor, webmaster and collectors/contributors far and wide. Please use the COMMENTS feature below to let us know how we're doing.
PrevPreviousThe Sea of Matrimony
NextGordon Hope Grant and the U.S.F. ConstitutionNext
6 Comments
Oldest
Newest Most Voted
Inline Feedbacks
View all comments
Bob Kozak

Alexander Milne Calder, the sculptor of the Penn statue, was the grandfather of the Alexander Calder known as the inventor of the mobile sculpture.

I wondered about that, and thanks very much for explaining the two men, both Alexander Calder.

I think the article is good. Thanks.

Excellent article, the Calder family has a long and illustrious history connected with Philadelphia. I can only hope that the powers-that-be in Pennsylvania ignore the nonsensical calls to remove the William Penn statue. I’m sure, like all of us, William Penn was a flawed human being and very much the product of his times. If people are still studying history 400 years from now, I wonder how they will view the current efforts of so many so-called historians today to rewrite the past to fit their political agendas. Far better to educate ourselves about how our predecessors have dealt with… Read more »

A positive note about William Penn was his treaty with indigenous tribes in which they stated they should live together in peace.

Thank you Postcard History staff for another excellent article. Pennsylvania is on my list of must visit States for all it’s great history. I just hope that I make it while the Penn is still there.