Of the forty-four countries in Europe, Portugal ranks fourteenth with a population of just over ten million. Officially the Portuguese Republic includes the offshore archipelago of the Azores and the island of Madeira. (See PostcardHistory.net, Madeira – Isles of the Blessed: January 17, 2022.)

In the eyes of traveling Americans, Portugal is a very underappreciated destination, but there are a few who consider it the most hospitable, economical, and visually pleasing of all of western Europe. And many of the best known and successful Portuguese Americans agree. Among them are the architect William Pereira who was responsible for the main hall at Cape Canaveral and the Transamerica Pyramid in San Francisco; Buddy DeSylva the musician, songwriter, and movie producer who almost single-handedly built and operated the Capitol Records empire; celebrity chef, restaurateur, television personality, and cookbook author, Emeril Lagasse is a Portuguese American. Tom Hanks, Keanu Reeves, and Meredith Vieira are of Portuguese descent. The writers and poets Emma Lazarus, John Dos Passos, and Danielle Steel enjoyed Portuguese heritage. Others are Bobbie Gentry, Don Ho, John Phillip Sousa, and Al Gore.

The Republic is administered by a Prime Minister who is appointed by Marcelo Rebelo de Sousa, the 20th and current president. There are seventeen ministries from which representatives meet as the Council of Ministers, in Lisbon, the capital.

The general demographic of the Portuguese can be stated as: Portuguese, speaking the official language of Portuguese which is used throughout the country. (One other language called Mirandese is also spoken, however only locally in the villages of Miranda do Douro.) About 60% of the residents live in the greater Lisbon and Porto areas. The largest percentage of the population is between 15-64 years of age. Life expectancy in Portugal is high; the average age for the total population is about 78 years.

The majority of the Portuguese population is Roman Catholic.

Portugal has experienced a steady immigration from Africa since the independence of the former African colonies. During the 1990s many eastern Europeans such as Russians, Bulgarians, Romanians, and Moldavians immigrated to Portugal and since 2000 it has mainly been people from Brazil and China and in recent years the number of western Europeans who move to Portugal has risen and many British, German, French and Dutch people now live in Portugal.

The cities and regions represented by these postcards do not struggle to maintain their collective identities. The concepts of tradition and practice are strong in Portugal and notions to make change are often dismissed without regret. 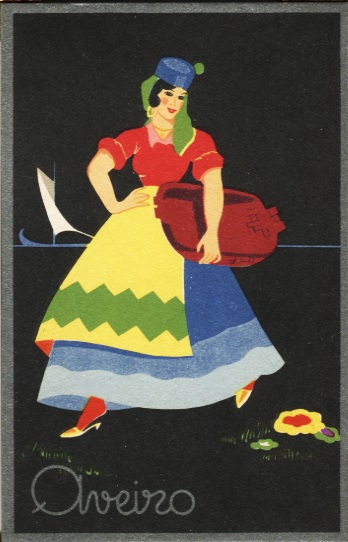 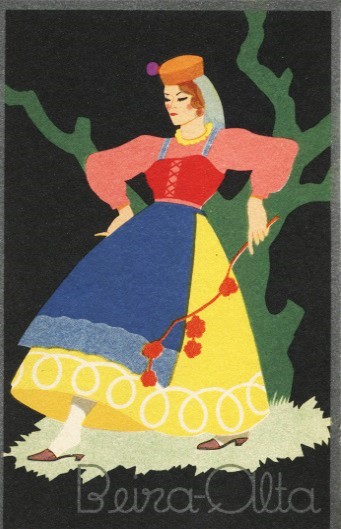 Located on the shore of the Atlantic Ocean, Aveiro has been called the Portuguese “Venice” due to the number of canals that run throughout the city. Founded in 1435, Aveiro has enjoyed the privilege of a duty-free annual festival, each March, that today is still an annual tradition.

The architecture found in Aveiro rivals many other old European cities. The cathedral is particularly interesting since it was influenced by both the pre-Kingdom era and the modernist movements during the 19th and 20th centuries. The shops along most of the avenues are in art nouveau and art deco style which seems to foster a willing spirit to buy some of the best hand-crafted products in Europe.

The first card in this set of costumes shows a native woman in her everyday attire.

Beira-Alta is a ministry in the north. The population is heavily Portuguese but there are fractional population centers of Basque immigrants of Spanish heritage. The costume worn by the lady shown on the card is considered a “Party Dress.” 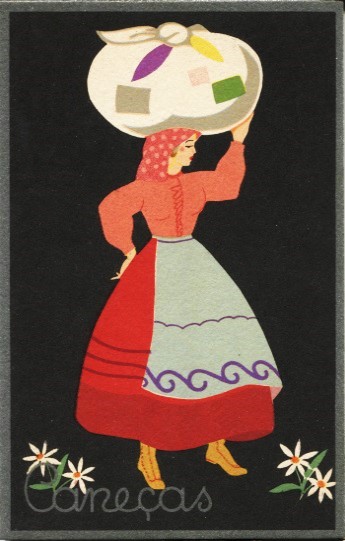 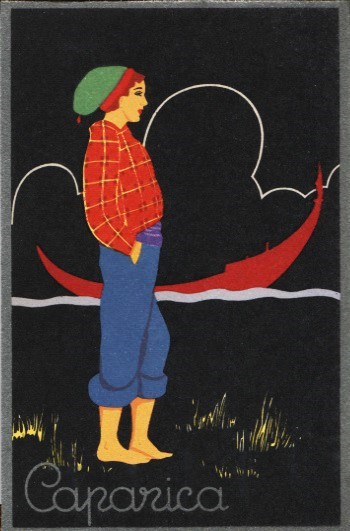 Caneças, pronounced Ka-nee’-cus, is a suburban neighborhood near Lisbon. The people living there are laborers and minor corporation executives. In the past the Canecans earned meager livings after they had master the art of throwing crude pottery cured in kilns they maintained in their backyards. (Canecas in Portuguese means “mugs.”) The costume pictured on this card is a young woman in her work clothes – she is a laundress.

Caparica is a seaside resort famous for its eighteen-mile-long sugar sand beaches, but it was once a thriving port city. The young lad, a homem do mar, dressed in simple, yet practical work attire could have been a deck-boy on a masted mercantile ship (he is barefooted – sailors of the era often went barefooted so they could easily swim back to their ship if they went overboard). 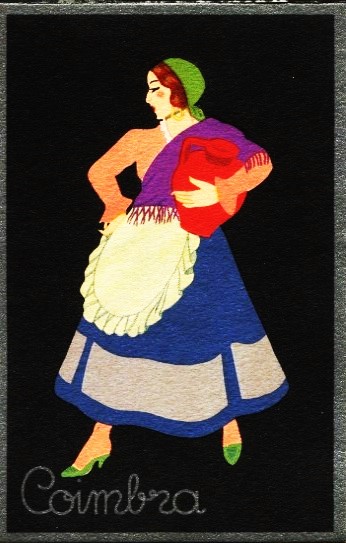 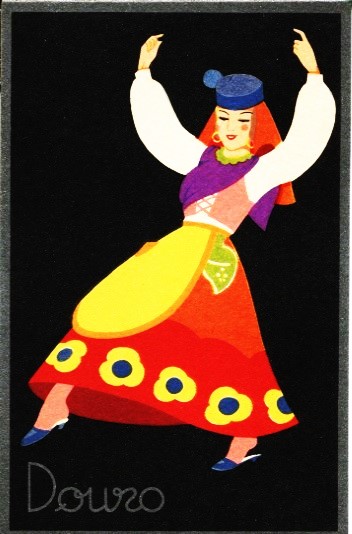 Coimbra is a university city known for the Biblioteca Joanina that was founded in 1717 by King John the Fifth of Portugal. The library is one of only two in the world with resident colonies of bats. The books are protected from insects by the bats. Before closing each day, maintenance workers cover the bookcases, desks, and tables with leather tarps. Throughout the night, the bats consume the insects that appear, then in the morning the tarps are removed and laundered to remove the bat guano. The lady in costume is a Tricana, a Catholic sect with roots in Corsica. The Tricanese neighborhood is mostly fishermen of small fish (particularly sardines and mackerel).

Douro and the river valley it is part of, is the home of a worldwide famous wine. It is the oldest wine-growing region on earth. The lush vineyards produce a grape that is sweet, yet full-bodied. The costumed lady is doing the dancando o vira. A traditional dance that celebrates the fortunes that God bestows on mankind. It is a three-three and three-three beat dance, usually done alone or in circles. The dancer stands and hops three times as he/she turns right and continues with another three hops as he/she turns left. In the festival season the dancando o vira is frequently danced barefoot on sand covered floors. 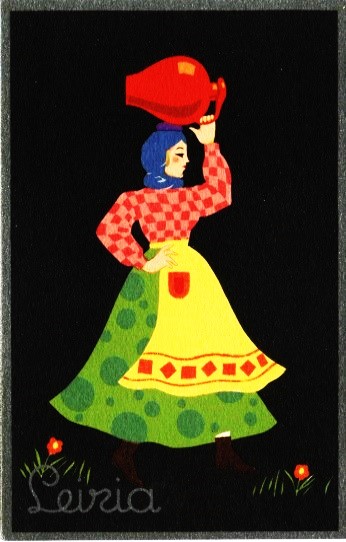 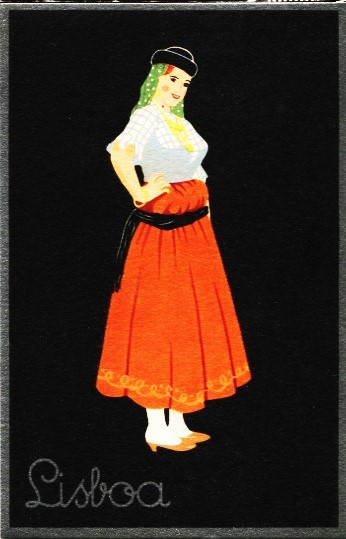 Leiria is a city along the ocean equal-distant between Lisbon and Porto. If you are young and starting college, you must travel to university by way of Leiria. The festivities don’t end until you participate in the Caminho da Fonte a dance that reminds you that you are on the way to the source – of life, knowledge, career, family, and yes, even death.

Lisboa is Portugal’s capital city. It is vibrant, beautiful, and welcoming. The urban culture is based on a history deeply rooted from prehistoric periods into the days of the Romans and Moors. The invaders have left behind remnants that enrich the society that now calls Portugal home. The costume of the Lisboetas is casual and comfortable.

The locals and tourists alike are fascinated by native cuisine. It is a rich mixture of fresh seafood and grass-fed beef. The cheeses and wines are spectacular, and the desserts have put Lisbon at the top of the dessert-lover’s itinerary. An item on every menu in Portugal is the Pasteis da nata (an egg-custard tart), a dessert shrouded in mystery. 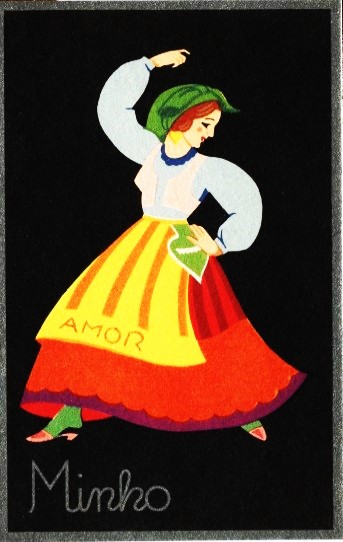 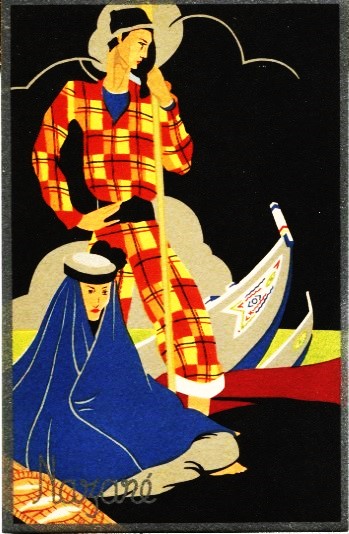 There is no place on earth quite like Minho, Portugal. The Minho region, pronounced, mean-yo, is in northern Portugal along the country’s northern border with Spain’s Galicia province. There are areas that blend so completely that it is difficult to recognize where you are. The traditions, language and culture, and even geography are exhilarating experiences. The food is good too!

The most common seafood is the cod fish, fresh from the Atlantic. It is a hearty dish, fried in hot olive oil and seasoned with paprika powder. Slice some small white-potatoes  and fry them along with the fish in the same oil. Before serving, top the fish and potatoes with onions sautéed in butter, salt and pepper, and a healthy pinch of dill weed. If you ever eat cod prepared this way, you will never forget it. (I haven’t, and it’s been 27 years since my last visit to Minho.

No trip, journey, excursion, vacation, or holiday to Portugal is complete until you visit Nazaré. The city is the namesake of the Biblical town of Nazareth. ThePescadores of Nazaré are people who fish for a way-of-living or as hobbyists, with a rod and line. They are completely uncaring about the fish that takes their bait. They see life as a blessing from the heavens. They are happy to be the children of a loving god.

Nazaré is a beach and resort city on the Portuguese shore of the Atlantic where the most notable or perhaps notorious waves in the world are found. Falling on the North Beach of Nazaré, an eighty-foot-tall wave is not uncommon. Surfers have made pilgrimages there for decades.

The city is beyond beautiful and there is something for everyone: art and art museums, architecture, cuisine, fireworks, shopping, bullfighting, folk dancing, ballet, theatre (if you understand the language), and nightlife with music from every genre.

First settled in the year 711, it was founded around a small wooden statue of the Virgin Mary that was brought there by a monk in the fourth century. The early settlers built their homes on the bluffs to protect themselves from Viking raiders and later to shield themselves from British, French, and Dutch pirates.

The economy of Nazaré is strong, the climate is mild, and in the last several decades real estate values have risen due to interest in retirement properties. The couple on the card above are dressed in traditional garb of the city and are proud to be residents of the place where the miracle of Our Lady of Nazaré occurred.

Portugal, many of the cities represented on these postcards, and especially Lisbon are superb holiday sites and, Lisbon is the only place I know, where the visitor’s center (Belem Tower, built on a small island in the Tagus River) was once a prison.

Ray Hahn is a retired educator, but he has never stopped teaching. His decades of researching, writing and editing a newsletter for the South Jersey Postcard Club has been a world-class education in trivia. In addition to postcard collecting, Ray’s other interests include history, genealogy, and touring the world with his wife Marie. Ray often advises his readers to "Join me as we explore the world one postcard at a time." Ray and Marie live in New Jersey.
PrevPreviousGordon Hope Grant and the U.S.F. Constitution
NextWhat Are You Drinking?Next
4 Comments
Oldest
Newest Most Voted
Inline Feedbacks
View all comments
Betsy W

Excellent article! I loved visiting Portugal. Its beautiful landscape, delicious food and friendly people are so inviting . These vibrant postcards capture the traditions and spirit of the country and its people!

I know a man and woman who honeymooned in the Algarve and came back raving about the place.

Extraordinary varied country. Travelled to Porto and Lisbon and have accumulated some fabulous cards. Contemporary they may be, but wonderful in their design.