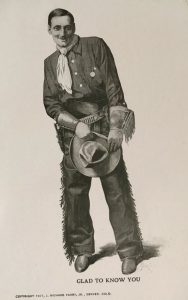 American is still in love with cowboys. Television follows a different path since The Rifleman, Gunsmoke, Bonanza, and Have Gun, Will Travel, and having and owning guns is now much different. It may not be as frequent as it once was, but there are still lots of nine-year-old boys who want to be cowboys, unknowingly because the romance of a lifestyle on the open range still thrills those with adventurous spirits. Read about a different time and how a young artist named J. R. Parry saw the Cowboy in Repose.