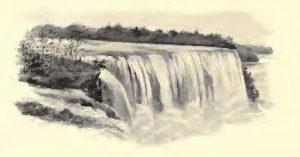 Long before the solitudes of western New York were disturbed by the presence of the white man, it was custom of the Indians to assemble occasionally at Niagara, and offer sacrifice to the Spirit of the Falls. The sacrifice consisted of a white birch-bark canoe, being sent over the terrible cliff, filled with ripe fruits and blooming flowers, and bearing the fairest girl in the tribe who had just attained the age of womanhood.

Crimes Against the First Amendment

One day about a decade ago a French postcard became a Napa Valley wine bottle label. The wine was fabulous, but a state agency decided it was unfit for distribution in their state because the content of the label – not the wine, the label was not appropriate in a public setting.