This year marks the one hundredth anniversary of America’s journey into the dark, dry years of Prohibition. The Eighteenth Amendment, ratified on January 16th, 1919, forbid the production, sale and transport of “intoxicating liquors,” but was ineffective in curtailing the consumption of alcohol, beer, and wine in the United States. As a result, the Volstead Act was proposed in Congress to specifically prohibit alcohol, wine, and beer and provide measures for Federal Law Enforcement.  President Woodrow Wilson vetoed the Act, but it was overridden by the House and Senate. The Volstead Act went into effect on January 17th, 1920, fully enforcing the Eighteenth Amendment and securely putting Prohibition in place.

For thirteen long and thirsty years the nation was fraught with crime, shoot outs, speakeasy raids, and offshore Coast Guard arrests. Gangsters such as Al Capone in Chicago, Nucky Johnson in Atlantic City, and The Purple Gang in Detroit cashed in on the transport and distribution of illegal alcohol in the United States. Contrary to popular belief, the Jazz Age was not all fun parties, flamboyant flappers, and covert tipples of bathtub gin. Crime was on the uptick and the government was losing money on the illegal sale of the illicitly obtained booze. The nation was failing in its attempt to win the war against alcohol.

In stepped President Franklin Delano Roosevelt. After running on the repeal platform, he pressured Congress to pass the Cullen-Harrison Act on March 22, 1933, the first measure toward repeal, allowing the sale and manufacture of low alcohol content beer and wine in the United States. On December 5th, 1933, the Twenty-first Amendment was ratified permitting states to individually determine the sale, manufacture and consumption of beer, wine, and alcohol in America.

The nation was thrilled. Happy days are here again! Drinks on the house! Bars, clubs, restaurants and supper clubs rose to the occasion outfitting their venues with glamour, intrigue, and fantasy. One thing was sure, entrepreneurs spared no expense welcoming their imbibing customers back in style.

Linen postcards, produced between 1931 and the 1950s, depicted the new establishments and capture a colorful peek into the posh and fabulous venues of the post-Prohibition years. During the Great Depression entrepreneurs ordered batches of the brightly-hued postcards to distribute to guests hoping to spread the word of their businesses to new and potential customers. Many of these textured postcards, known for their airbrushed and utopian images, survive today allowing us to imagine what a night on the town would be like at the atmospheric venues that proliferated following repeal. 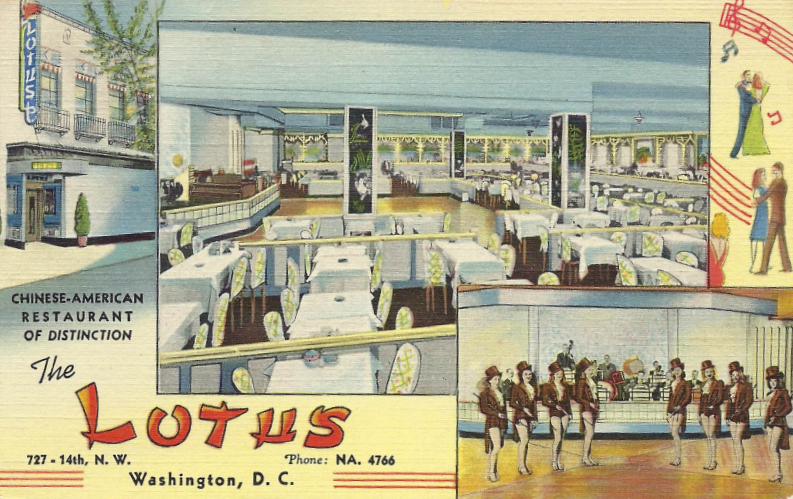 Exotic restaurants and cabarets sprung up in large cities and small towns across the country. The Lotus Club, created by proprietor Dick Gee Lam, was one of the first successful supper clubs in Washington, DC. Opening in 1928, Lam raised his game after repeal adding floor shows and promoting his Chinese restaurant as a place to dine, dance, and enjoy stupendous nightly revues. The décor was replete with oriental ornamentation to complement the Chinese cuisine and effectively transport guests to a different world. Fascinating music was provided by the Lotus Orchestra for patrons’ pleasure and there was no cover charge at any time! Over the years big name entertainers graced the club’s stage including Mel Torme, Dean Martin, and Sammy Davis, Jr. The Lotus Club closed its doors in the 1960s, but in its heyday, it was known as a Chinese-American restaurant of distinction! A linen postcard from the Mirror Room at the Hotel Bentley in Alexandria, Louisiana beckons us into a streamlined Art Deco lounge with imposing columns, shiny glass tables, and a reflective ceiling hovering above. The Hotel Bentley was constructed in 1907 by Joseph Bentley a wealthy Pennsylvanian who made his fortune in the lumber industry. The hotel underwent renovations over the years and the glamorous Mirror Room became a hotspot in the 1930s. Entertainers appeared nightly at the Mirror Room including Bob Neff and the Mello-Aires, and straight from Sioux City, Iowa, Jane Rae Morton and her string trio! A 1941 article in The Town Talk describes the Mirror Room as a good place to get that needed “pickup” after leaving the office. “Here you can meet your friends and partake in superbly mixed refreshments!” You can still enjoy your favorite cocktail in the opulent Mirror Room at the Hotel Bentley, which is listed on the National Register of Historic Places. 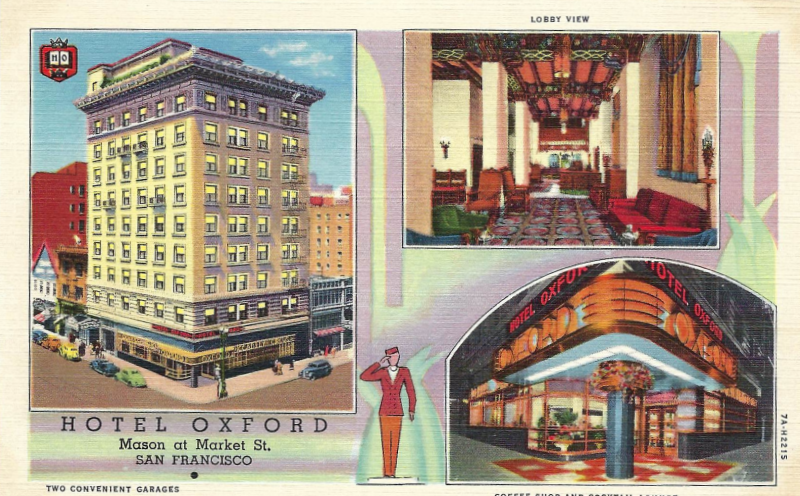 Traveling salesmen and regional businessmen often set up camp in reasonably priced hotels during the Great Depression. One such place was the Hotel Oxford on Mason and Market Streets in San Francisco, California. A 1934 advertisement appearing in the Appeal-Democrat proclaims “every room available with tub and shower, singles starting at two dollars, and free garage parking.” You can’t beat that! A multi-view linen postcard from 1937 showcases the facility’s coffee shop and cocktail lounge. It would be hard to resist entering the establishment, especially at night, when it was set aglow with bright neon lights reflecting off its curved black façade trimmed with chrome! A great place to stop into after a hard day of sales pitches for a quick drink before settling in for a restful night of sleep at the affordable Hotel Oxford. 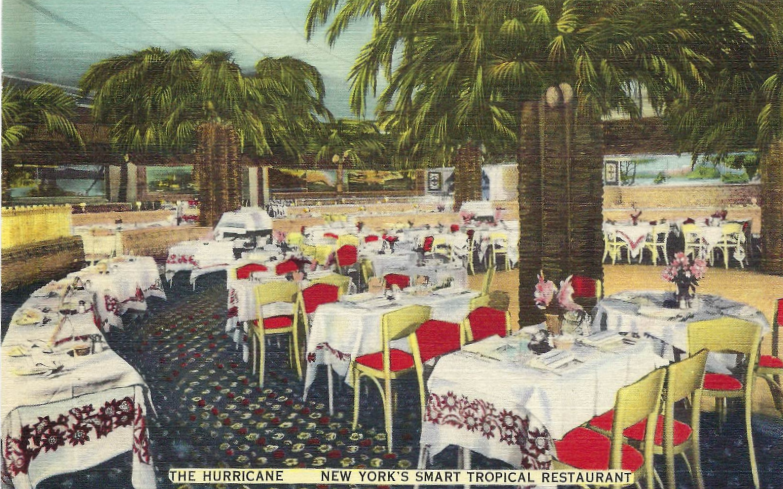 Tropical-themed venues came into vogue during the post-Prohibition years. Donn the Beachcomber and Trader Vic opened Polynesian-style venues in California in the 1930s and the concept was soon emulated throughout the country. Jumping on the bandwagon New York’s Hurricane Restaurant opened on Broadway and Forty-ninth Street in New York City around 1940. Decked out with floor to ceiling palms, beach inspired murals, and flower festooned tablecloths the Hurricane transported guests to a far off tropical island. Top musicians performed at the Hurricane including Duke Ellington in 1943. His engagement was for a full twenty-five weeks with live national broadcasts six nights a week! The Hurricane, known as Tahiti on Broadway, shuttered in 1944 at the height of its success. The operator of the club, Dave Wolper, was rumored to have dealings with organized crime and later stuck to producing Broadway shows.

Carousel bars, pink elephant lounges, and big band venues were all part of the lively entertainment following repeal.  Produced almost exclusively in America, linen postcards provide a vivid portal to life in the post-Prohibition years and beyond. 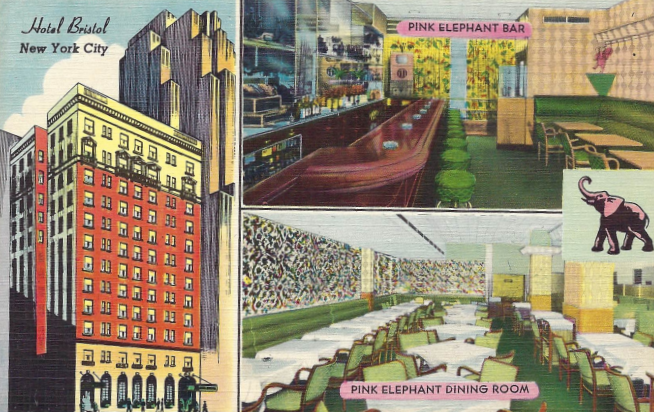 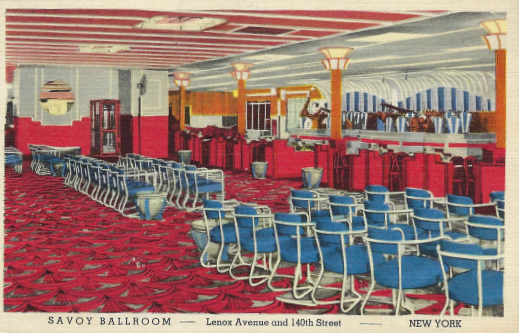 Anne Peck-Davis, with Diane Lapis, co-authored the book, Cocktails Across America: A Postcard View of Cocktail Culture in the 1930s, 40s, and 50s. Countryman Press, 2018. For further reading on this topic, including vintage cocktail recipes and tantalizing postcard images, the book is available on Amazon.com bit.ly/CocktailsAcrossAmerica
PrevPreviousThe Flu Pandemic of 1918
NextFace on the Bar Room FloorNext
3 Comments
Oldest
Newest Most Voted
Inline Feedbacks
View all comments
Mary Schaefer

Thank you for a delightful trip back to that era. Such elegance and excitement, and the cards are lovely.

Thank you Mary! I am glad you enjoyed the article.

I recall the Lotus Club vividly as I was present every night Bobby Darin headlined there. Oh, such wonderful times. The House/Place where Louie Dwelled, The Purple Tree and The Casino Royale were nearby . Thanks.