I asked fellow collector Bruce Nelson* to e-mail me copies of postcards from his collection that target the flu epidemic of 1918.  The images as well as the messages were interesting when he described them to me over a phone call recently. (Electronic social distancing)

As a bit of background, World War I started in Europe in 1914. US involvement began April 1917, three years later. US Army training camps, established at the outbreak of US involvement, had upwards of 50,000 troops at a given camp depending on its size. The crowded conditions contributed to the spread of health problems.  It has been said that the first recorded American cases of the Spanish influenza occurred in March 1918 atCamp Funston, a part of Fort Riley, Kansas.

Views of from a 4-fold postcard of Camp Funston mailed from Junction City, Kansas.

Troop movements worldwide resulted in an uncontrollable spread of the virus. Apparently three waves of the flu hit the globe with varying mortality rates from 1918 thru early 1920. [Editor’s note: On the Wikipedia website you can see a graph of the influenza mortality in the United Kingdom that clearly shows the three waves of disease: first in late June and July of 1918, the second and most severe in October and November of 1918, and what is called the rebound wave in late February 1919.]

Before it was over, approximately 640,000 Americans died from the illness. World War I claimed 125,000 American soldier’s lives.

World War I military censorship minimized early reports of the illness among the combatants. Neutral Spain’s newspapers were free to report on the disease and when their king, Alfonso XIII, became gravely ill, numerous newspaper reports gave the impression Spain was especially hard hit, giving rise to the nick name “Spanish Flu.” Currently historians and experts still disagree on the origin of that particular flu.

The four illustrations that follow are postcards from that era. 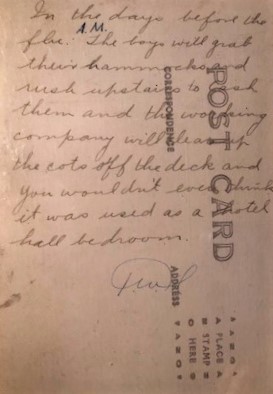 The above message reads: “In the days before the flu the boys will grab their hammocks and rush upstairs to cash them and the working company will clear up the cots off the deck and you wouldn’t even think it was used as a hotel hall bedroom. …Paul” 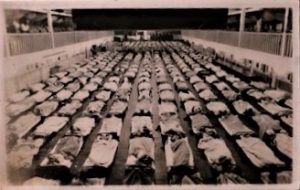 This real photo card of naval recruits sleeping in a large auditorium. The exact location is unknown. 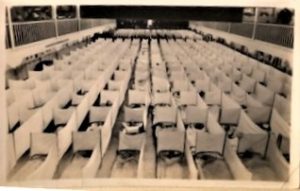 This real photo postcard shows men sleeping within “sneeze screens” that are direct inferences to the flu pandemic.. 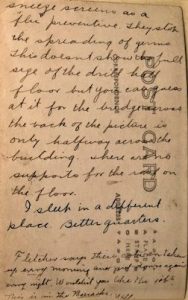 The message on this card reads: “Sneeze screens as a flu preventative. They stop the spread of germs. This doesn’t show the full size of the drill hall floor but you can guess at it for the bridge across the back of the picture is only halfway across the building. There are no supports for the roof on the floor.
I slept in a different place. Better quarters.
Fletcher says these cots are taken up every morning and put down again every night. Wouldn’t you like this job? This is in the Barracks.   Will“ 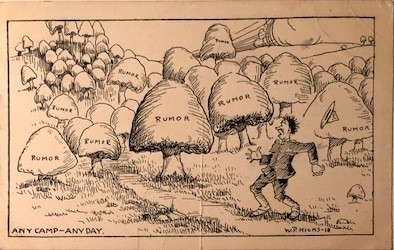 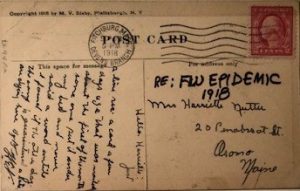 This military comic postcard was mailed from Fitchburg, Massachusetts, Devens Branch in September 1918 to Maine. The message reads: “Hello Harriet: Just a line re a card a few days ago that was mailed about the first of the month. Someone put it under my bed and never said a word until I found it the other day. The camp is quarantined. A lot are dying here.  ….signed (unknown)“ 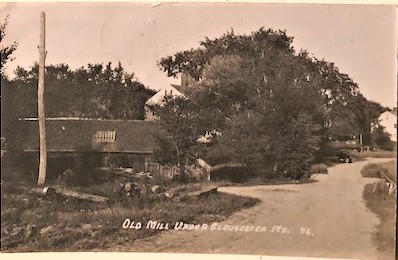 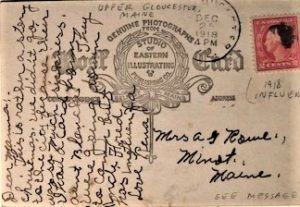 This real photo card of Old Mill Upper Gloucester, Maine mailed from there on December 24, 1918, just after the peak of the influenza epidemic. The message reads: “Dear Mamma: This is rather a stormy Christmas. We didn’t go to the City because there was so much sickness. I had a card from aunt Blanch. They were going down to camp, but Uncle Fred has influenza.  Love Rena”

I was never aware of the Spanish Flu epidemic of 1918 until the swine flu scare of 1976 was in the news. That January the Spanish flu virus killed one and hospitalized thirteen at Fort Dix, New Jersey.  The concern was a similar epidemic was on the horizon as occurred in 1918.  That prediction never panned out. A nationwide vaccination program in October was instituted and after 25% of Americans got the vaccine, the program was ended.  Given the current scenario, I have been doing a lot of internet searches on that pandemic and find the information interesting. The postcard messages of the time however put a personal touch on it.

* A special thank you goes to Bruce Nelson for his help with this article. The illustrations come from his collection.

Bob Toal is an avid collector of postcard postal history targeting the birth and development of US postcards from their early beginnings to present. This includes early pioneer and private mailing cards as well as view folders, bi and tri-fold postcards, jumbo postcards and anything unusual in the postcard realm.
PrevPreviousThe Artists and Their Passenger Lines
NextThe Dazzling Nightspots of Post-Prohibition AmericaNext
3 Comments
Oldest
Newest Most Voted
Inline Feedbacks
View all comments
Bruce Nelson

Bob, Thanks for showing my four cards in your article. The two with the nighttime beds (one without screens, and one with the protective screens around 3/4 of each bed) are described as being at “Naval Training Station, San Francisco,California” From google search by me.”sneeze screens,1918, Naval Hall.” With over 50 years of postcard collecting, and numerous disaster postcards in America, the 1918 flu cards were rarely found. On the other hand there are huge numbers of real photo postcards of fires, floods, hurricanes, tornados earthquakes. etc. It seems that area photographers were immediately on site takings pictures and the… Read more »

I agree. it seems that the only way to collect this 1918 flu epidemic (disaster) is to read the messages on period cards. Surely many are lurking out there undetected.

Yes, I too did a Google search on “Sneeze screens 1918” and a short 3 paragraph article in United States Medical Bulletin pgs 167 -168, Vol XIII Jan 1918 discuss the use of “unbleached muslin, 1 yard wide tacked to three 1 inch uprights 4 ft long” for sneeze screens. The same image in the real photo cards in the postcardhistory article are shown on pgs 165-166. Another article nearby in the same medical bulletin discusses Influenza on a Navel transport and goes into detail how cases are treated. Very interesting but too involved for the main article but an… Read more »