For people today, a corn palace might not have much allure, but a century ago, corn palaces, which seem to be unique to South Dakota, were built as a means of showcasing the richness of the land and the products of the area. The exhibits encouraged people to settle in the area and to buy the produce. Today the Mitchell Corn Palace is likely the only one that remains.

In the late 19th century, the Great Plains, including areas immediately west of the Mississippi River, were growing and expanding. Settlers were moving into the area and homesteading. Corn Palaces seemed to meet the need to promote the area and the products that could be produced from the fertile land. The idea didn’t start in Mitchell, South Dakota, but was seen by those living in the community as a way to promote their hometown. 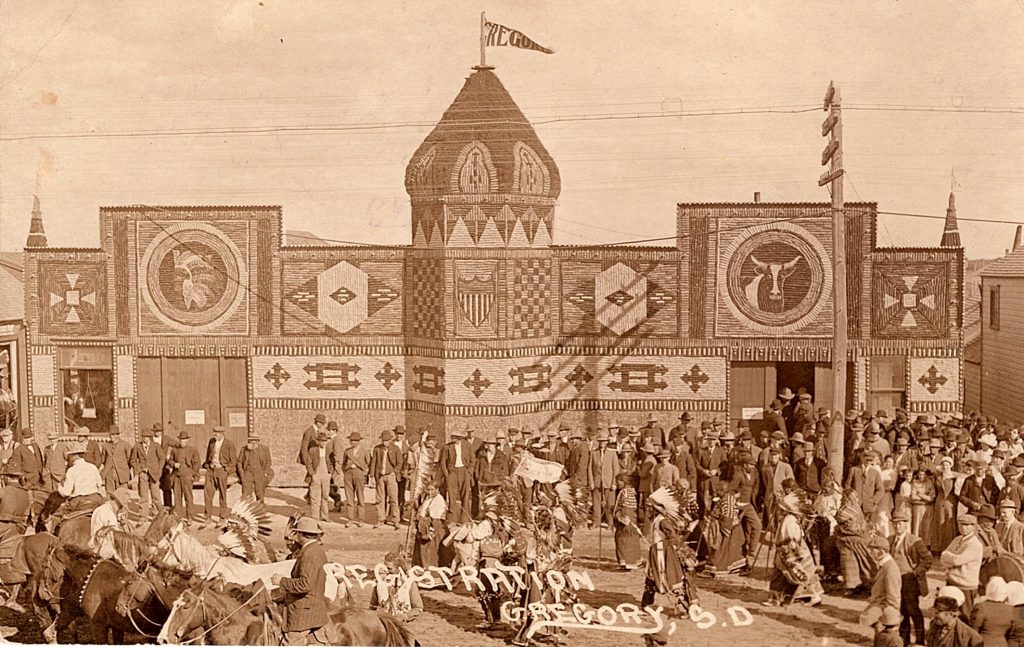 Registration Day at the Corn Palace in Gregory, SD

At one point in time, other corn palaces existed in Sioux City and Creston, Iowa; Plankinton, Gregory, and Ipswich, South Dakota yet few postcards exist of those early predecessors to the Mitchell Corn Palace. 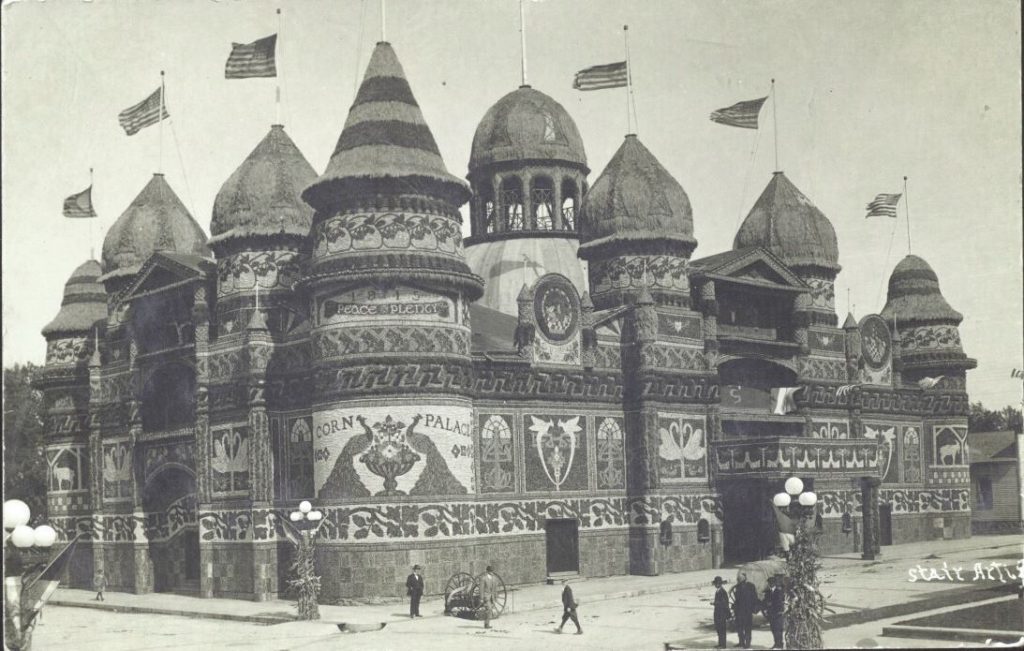 On August 21, 1891, The Mitchell Capital announced, “The citizens of Aurora County, in view of the bountiful harvest, have decided to erect a grain palace as the prominent feature of a grand celebration to be held at Plankinton.” The building was a Gothic design and was described as follows, a grain palace “is a peculiarly apt and happy expression of an appreciation of nature’s bounty.

The community that has material for a lavish grain palace has the inherent qualities of soil and climate which assure prosperity,” stated the Wessington Springs Herald on October 9, 1891. In this early grain palace, grain was transformed into works of art depicting an elk, a flock of sheep in a field, and a farmhouse.

That same October The Mitchell Capital reported that residents and businessmen from Sioux City and Mitchell took part in the opening festivities and came away with the statement, “The palace is indeed a marvel and every visitor was agreeably surprised.” In Plankinton, they are to be congratulated on their enterprise in producing such an artistic and attractive exposition of their magnificent crops.

But this building wasn’t designed or built to endure the elements that it would see annually so it was sold after the event. The following year another such grain palace was built in Plankinton, but it was to be its last. Perhaps the competition with Mitchell’s palace and those built in other cities, such as Gregory was too much. 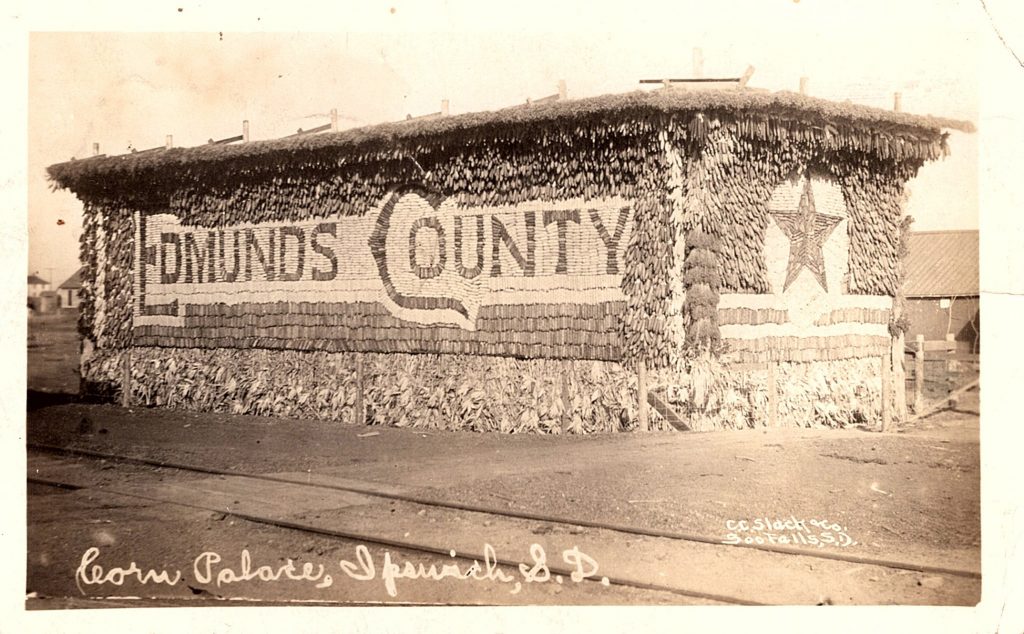 The Corn Palace in Ipswich, South Dakota, was indeed a modest attempt to celebrate the harvest, however, little information has been found other than some postcard images. 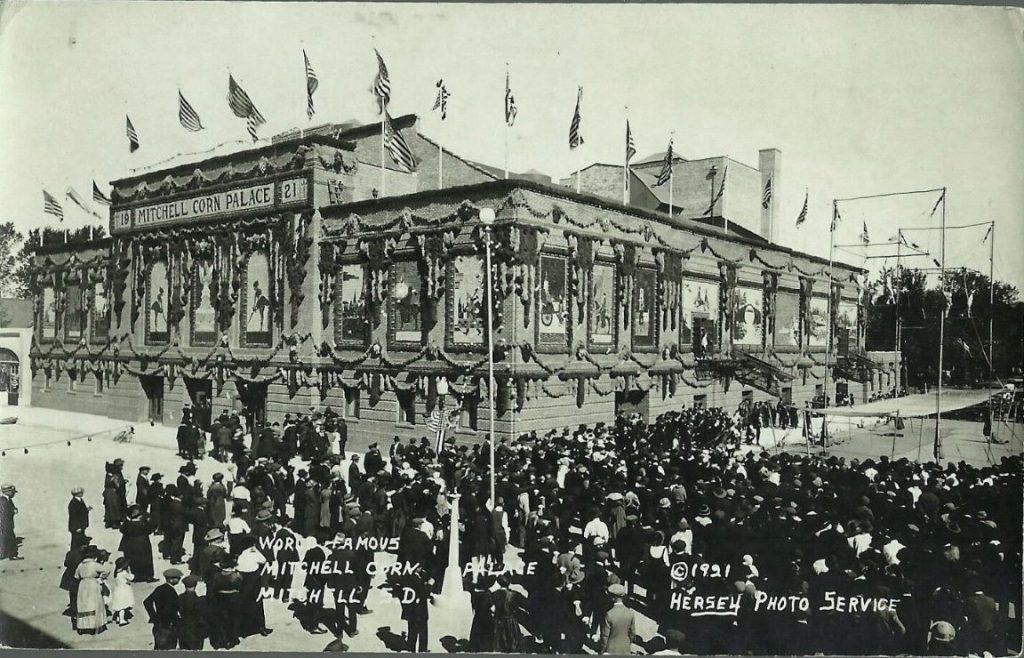 Mitchell’s Corn Palace today is the last survivor of that era. It’s history goes back to 1892 when the city of Mitchell was only twelve years old with some 3,000 inhabitants. The original Corn Palace was called “The Corn Belt Exposition.” By 1905 the original Corn Palace had been rebuilt and again, in 1921 it was rebuilt a third time. This last one was designed by a Chicago architectural firm, and in 1937 the onion dome and Moorish minarets were added giving the building it’s unusual look today

The exterior murals change each year. For many years outside artists were contracted to design the murals but starting in 2018, designs have been created by Dakota Wesleyan University students (a local university) but costs to make the changes is an estimated $175,000 annually. 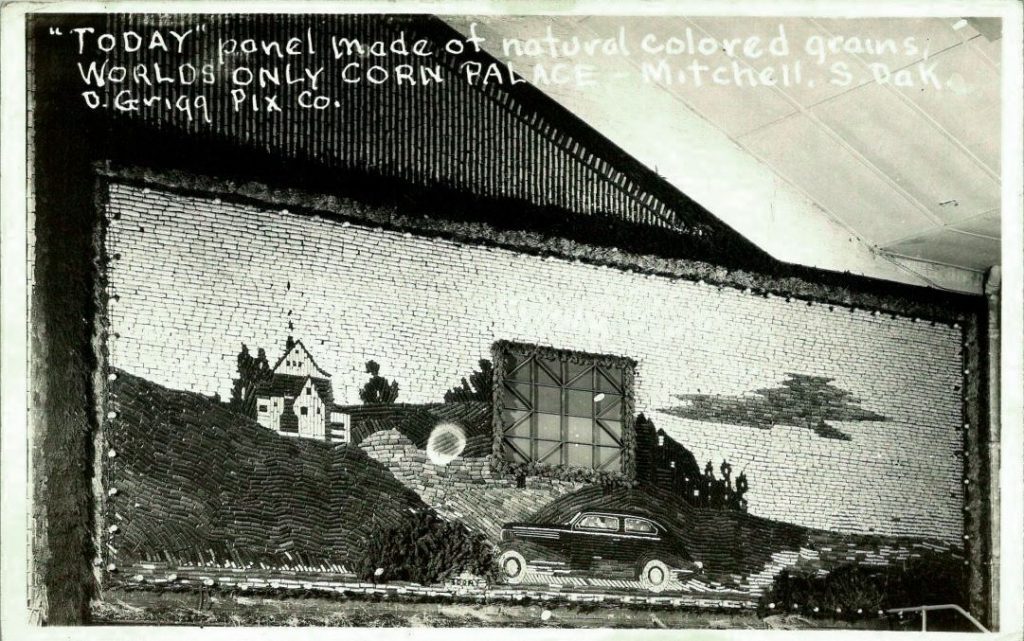 Here is a summary of what goes into this project annually. Twelve naturally-occurring shades of corn are grown by local farmers to create the artwork. The preliminary drawings are transferred to black tar-paper labeled with codes corresponding to colored corn in what may be called a “corn-by-numbers” pattern. Each year about 325,000 ears of corn are split in two lengthwise and nailed to the exterior walls of the building. It’s been estimated that approximately 1.5 million nails are used. 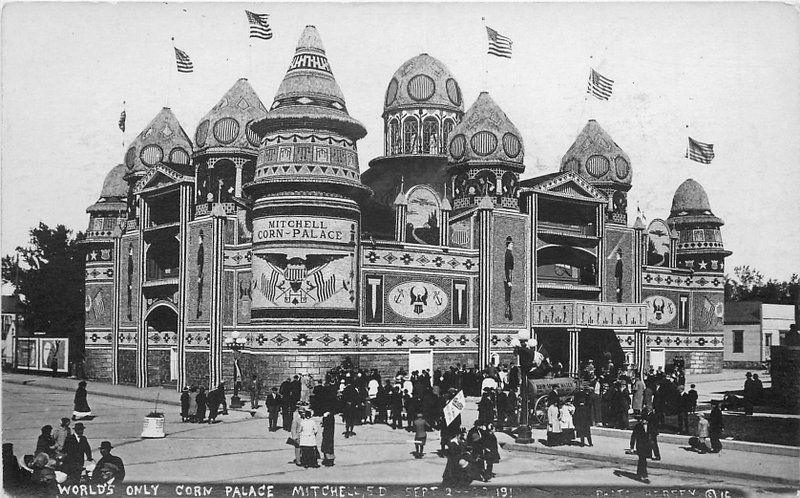 Lately, an estimated 500,000 visitors arrive annually. The Corn Palace (the actual building) serves the community as a venue for concerts, sports events, exhibits and other community events. Each year, the Corn Palace is celebrated with a citywide festival called the Corn Palace Festival. Other popular annual events include the Corn Palace Stampede Rodeo in July and the Corn Palace Polka Festival in September. It is also home to the basketball teams from Dakota Wesleyan University, the “Tigers” and the Mitchell High School “Kernels.”

Duane Stabler is retired from a career in engineering. Like many postcard collectors, Duane is also interested in genealogy and has successfully published in that field of endeavor. In addition he edited the Twin City Postcard Club newsletter for eleven years. Duane and his wife live near Dallas, Texas.
PrevPreviousDecoding Yiddish Postcards
NextMystery Card #2Next
9 Comments
Oldest
Newest Most Voted
Inline Feedbacks
View all comments
Bob Kozak

I toured the Corn Palace during my childhood. Although my mother remembered having seen several exhibits during her previous visit, the place was basically just a tourist trap by the early ’70’s.

You probably caught the Corn Palace at a time when not much was going on……perhaps between events but I do recall the facility is often used for concerts which would occur at night.

Real photo offerings which note photographer credit also display year of the event. 1908, 1916 and 1937 are examples I have. Another gives shutterbug reorder number but lacks any other identity. With two automobiles in view the time frame appears to be the late ’30s (it is postally unused). Linen presentations display the year in the palace design. 1939, 1951 and 1956 are items I hold. Front view post WWII card goes against the grain. Unused, the year of production is unknown. Three autos are evenly spaced, all the same make and color, parked along the curb, being no help… Read more »

I think there were cards with the different dates on them and recall seeing a collection of the Corn Palace that illustrated the dates. There were some fabulous cards in that group owned by one of the members of the Twin City Postcard Club.

I visited the Mitchell Corn Palace in 1963… It was fabulous!!

Great article Duane!
Janet and I stopped in Mitchell on one of our crosscountry camping trips in the ‘80s. It was as fabulous as my few RPs promised. The doors were open, and we were motioned inside. The house was fairly full of folks listening to a sales pitch for a gay conversion program. We left, but my few old time postcard views became far more meaningful after seeing the Corn Palace in real life.

Thanks Lew, some people will certainly feel that the place is a tourist trap but I think that’s true of many places we might visit. The concept of a “corn or grain palace” is what I think is interesting and the design that was done is something truly amazing. I’m sure those places were few and far between and I suspect they faded away because of cost. Inside, the building can/was used for many events and I’m sure what you experienced was an event paid for by those putting on the program. I was in the building for a college… Read more »

Great article. I have enjoyed Corn Palace cards ever since my friend showed me her collection. I wondered how the pictures were created using corn and this article answered my question – “corn by numbers” of course. And cutting the corn in half, lengthwise, enabled the best use of the corn.

Hi Mary, thank you for your comment and I’m glad that I was able to provide an understanding of how these pictures on the building were created. What I didn’t say in the article is just how did they do this back in the day when there were fewer pieces of equipment to simplify the work. Those folks were truly artists and we must not forget the effort and investment to create a unique facility. I think a collection of cards is indeed most interesting and I know someone else who has such a collection. He tried to find a… Read more »