The discovery of gold and silver in the American West led to tens of thousands of men arriving to seek their fortunes. Their living conditions were appalling — they camped in tents or worse, dumped their sewage into the same water they drank and used for cooking, caught all sorts of diseases, and often found nothing of value. And when the boom was over, they moved on and whatever had been built was left to rot.

As the Industrial Revolution gained steam, more stable conditions existed as factories were built along rivers and workers could find places to live in the adjacent villages. But as the factories grew, new workers were forced into whatever living spaces there was. Accommodations were slapped together, often as boarding houses for single men or women, or tenements for families with children. Conditions were better than in the mining camps but not by much — there was just more regular work to be had.

One factory owner sought to stabilize the situation. George Pullman had developed the business of building railroad passenger cars and his factories needed large numbers of skilled workers who he wanted to retain. By 1880 he decided to combine the factory and the worker accommodations in one place that he controlled. He bought 4,000 acres south of Chicago and built a modern factory and row houses to rent to his workers, close by but separate from the factory. He equipped them with indoor plumbing, trash removal, and relatively spacious rooms.

The result was the first “company town,” Pullman, Illinois. 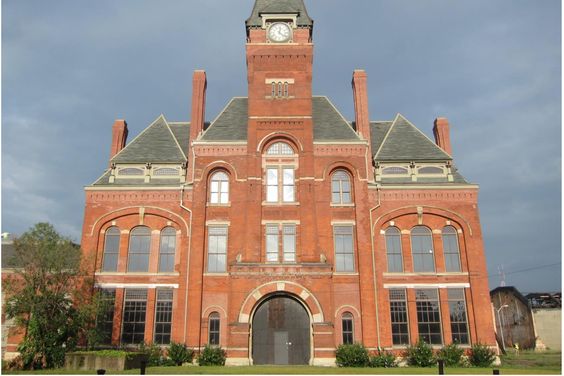 George Pullman combined features of idealism and hard-headed capitalism. The houses were both practical and aesthetically pleasing in a Queen Anne style. Stores and shops included in the town were also made of brick with Romanesque arches. Recreational facilities such as Arcade Park and Like Vista were constructed in curvilinear fashion, not straight lines.

Pullman did not do this for free. He rented the houses and expected a six-percent return on his investment. Work in his factory was not easy and unrest, initially muted, festered. In 1894 Eugene V. Debs, head of the American Railway Union, could proclaim that “the paternalism of the Pullman is the same as the interest of a slaveholder in his human chattels. You are striking to avert slavery and degradation.” The strike began in May 1894 and only ended when federal troops fought pitched battles with the strikers.

Edward Bellamy’s Looking Backward (1888), Ebenezer Howard’s To-Morrow: A Peaceful Path to Real Reform (1898), and Henry George’s Progress and Poverty (1879) are unlikely to have taken any cues from Pullman, but altogether they sparked the “Garden City” movement. Garden cities were not just about decent living facilities for factory workers. The communities that sprang from the movement was suburbs of larger cities where employment opportunities existed apart from where the workers lived — they were planned suburbs.

Letchworth Garden City north of London was the first flowering of the Garden City movement. Some 3,800 acres were assembled in 1903 by the First Garden City Limited and the designs for the community were prepared by Raymond Unwin and Barry Parker following precepts of Howard’s book, which argued for situating the town within a green belt of farm and rural open land.

In the U. S., in 1908 Forest Hills was established on 600 acres adjacent to Forest Park in Queens, N. Y., then an area of farms. Parts of Forest Hills, as the project was named, were developed by Margaret Sage for Tudor style houses in 1910. In 1911 Forest Hills got its own railway station on the Long Island Railroad, giving it direct access to New York City.

The Depression put an end to the development of garden cities as it did to virtually everything else.

Franklin Roosevelt’s election as U. S. President in 1932 led to a revival of the idea of garden cities. While the concept was present, the ability to fund such projects with private capital was non-existent. Roosevelt created the Resettlement Administration in the Department of Agriculture in 1935 with the ambitious nationwide goal of providing homes for families who were leaving farm life in search of jobs in industry. Early on, as many as 3,000 new towns were envisioned, but the number dwindled to 25 outside major cities and eventually only three were finished, in Wisconsin, Ohio, and Maryland.

Roosevelt appointed one of his “Brain Trust” advisors, Rexford Guy Tugwell, to implement these plans. These new suburban towns were to provide not just housing but to serve as an experiment in both physical and social planning. The first to be built was Greenbelt, Maryland, on 12,000 acres of depleted tobacco land northeast of Washington, D. C.

Greenbelt grouped homes in “superblocks” with curving pavement that encouraged walking to schools, shops, athletic fields, and community buildings in the middle of the residential areas. Automobile traffic was separated from these areas.

The 885 new residents who arrived in late 1937 had been screened not only by income and the then-prevailing racially restrictive policy, but also for their willingness to become involved in the community. Most were younger families and they quickly formed religious congregations as well as kindergartens, a local newspaper, community band, PTAs, and the Greenbelt Health Association. In 1939 a public swimming pool was built with local funds. 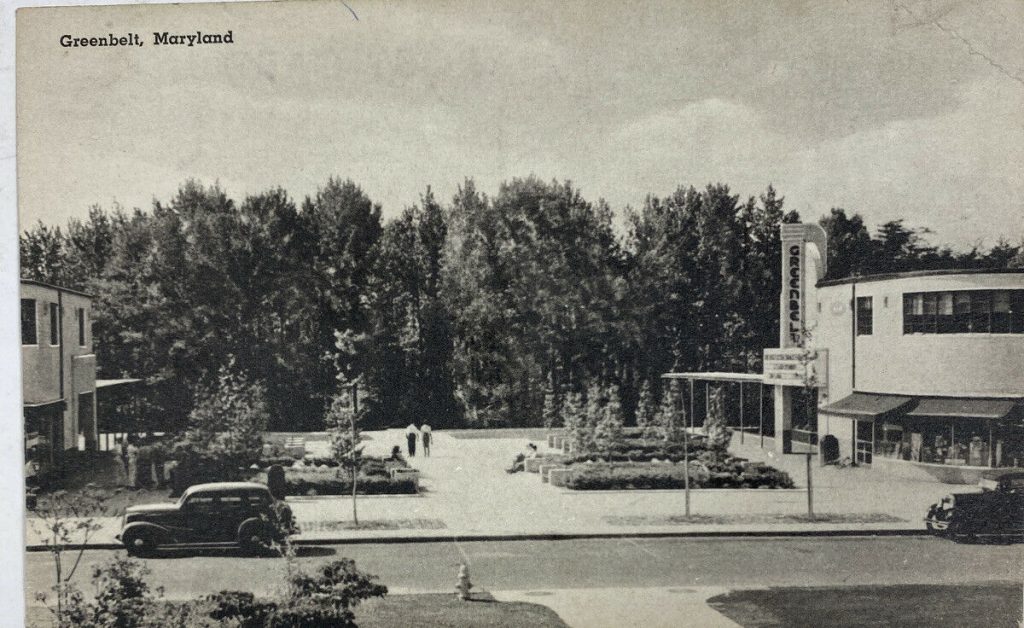 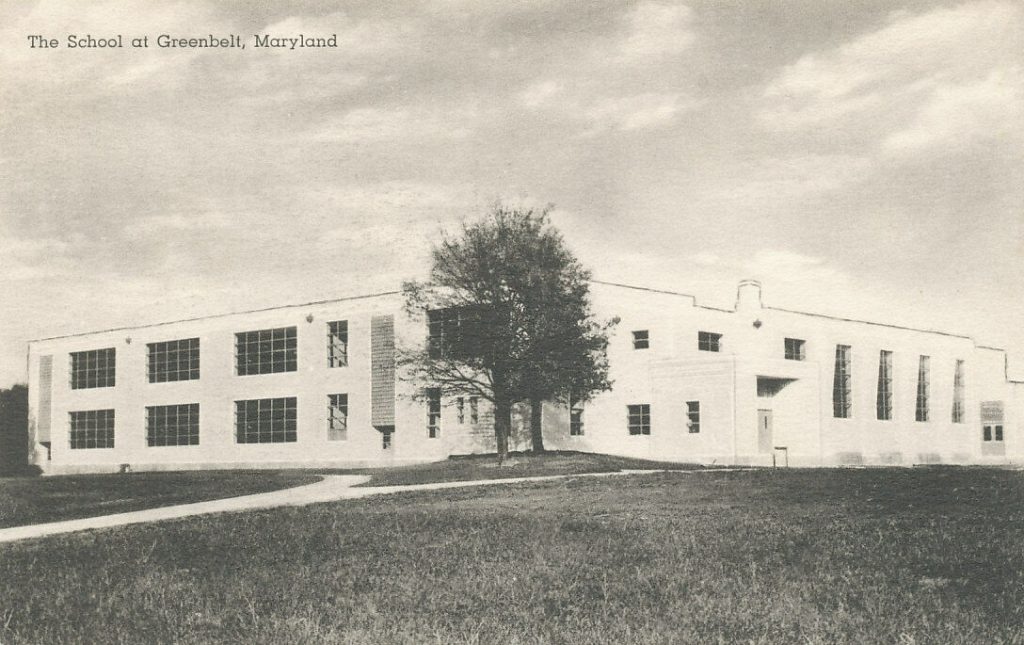 Eleanor Roosevelt took an active interest in the social engineering of Greenbelt, focusing on cooperative activities like the Consumer Grocery Store and the New Deal Café. It is said that whenever the community faced a new problem, its first response was to form a cooperative committee. 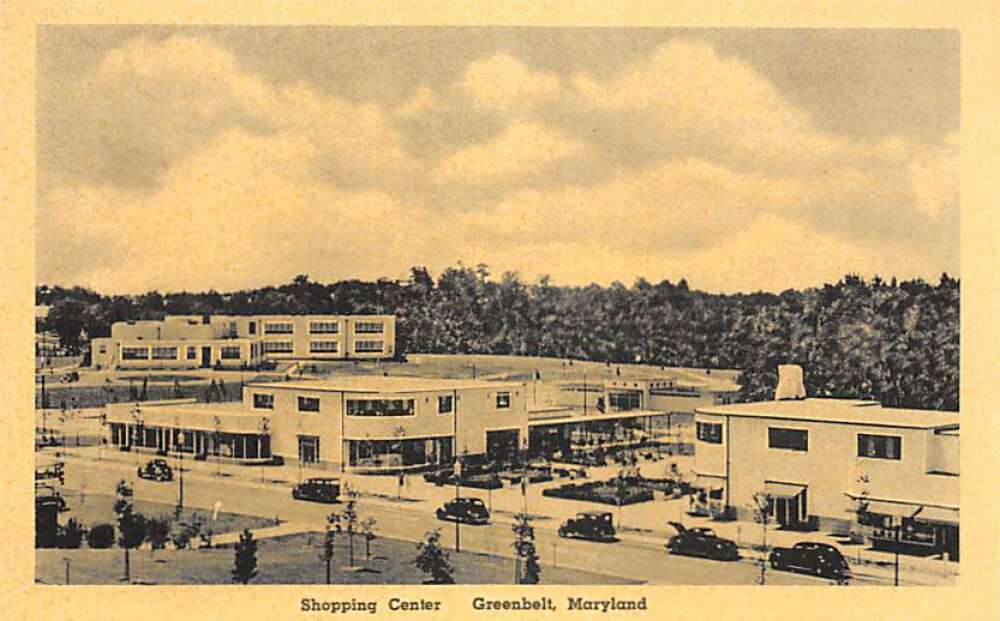 The design of the houses was generally in the European International style with occasional Art Deco touches. It emphasized straight, undecorated fronts and a deliberate lack of ornamentation. Front entrances had flat-roofed porches and each house had both a front yard, called the “garden side” which faced the winding walkways, and a “service side” where deliveries were made and trash collected. The houses were constructed of concrete block and were painted, usually off-white. Most houses had two or three bedrooms, though a few were one-bedroom “honeymoon” houses. 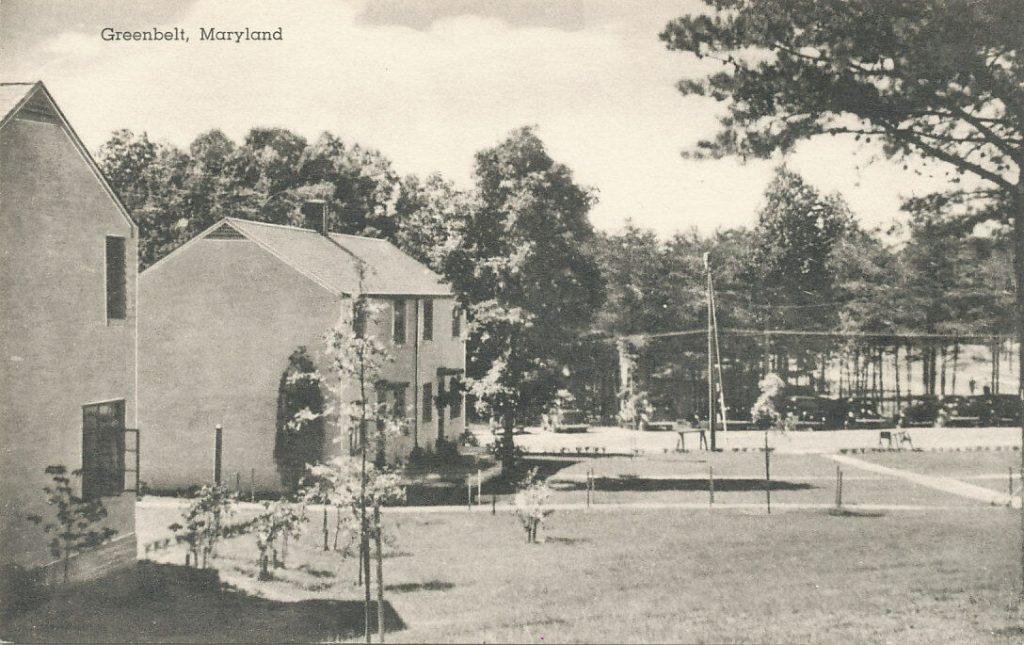 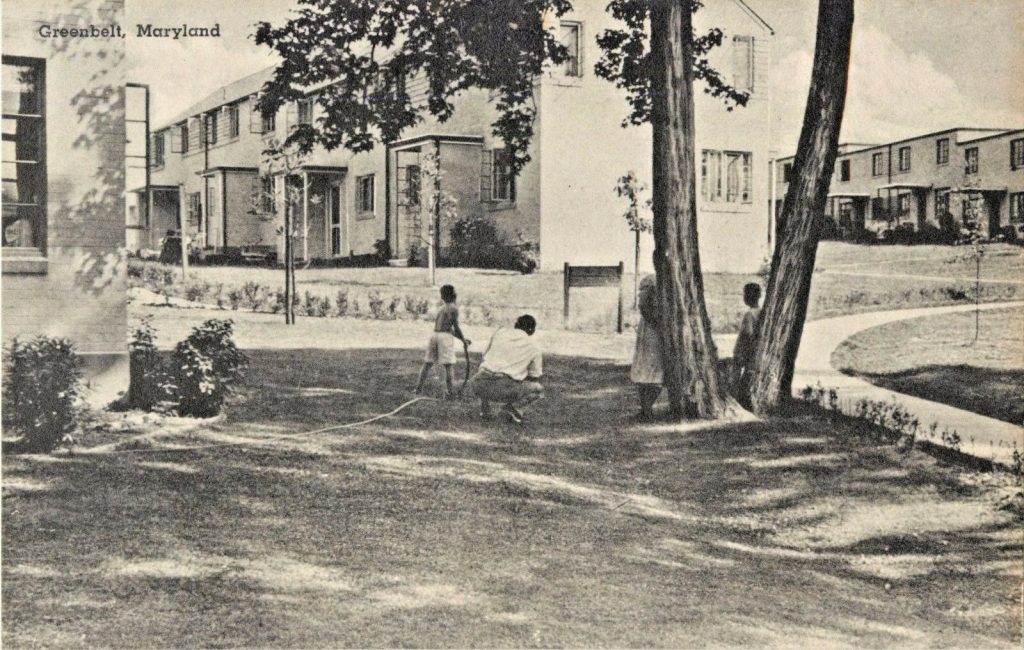 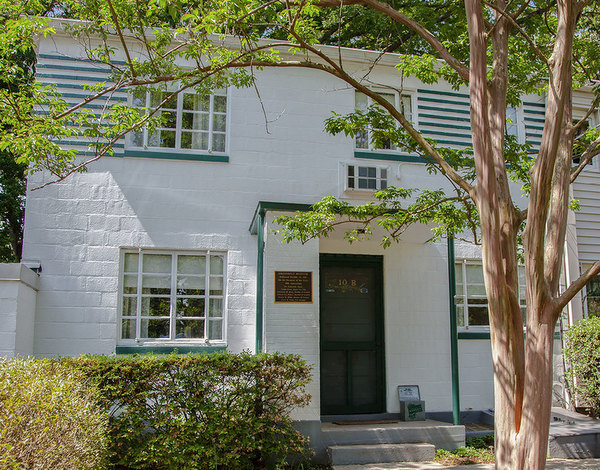 Greenbelt was attacked on many fronts by opponents. Some focused on the social engineering of cooperatives, others felt that helping laborers leaving the agricultural life were depriving larger farms of their tenant workforce. Tugwell as reviled as “Rex the Red” for implementing Roosevelt’s state-directed economic planning to overcome the Depression.

These attacks led to Tugwell being forced out of the Resettlement Administration. Roosevelt appointed him as Governor of Puerto Rico and after World War II he held academic positions at the University of Chicago and the University of California at Santa Barbara. 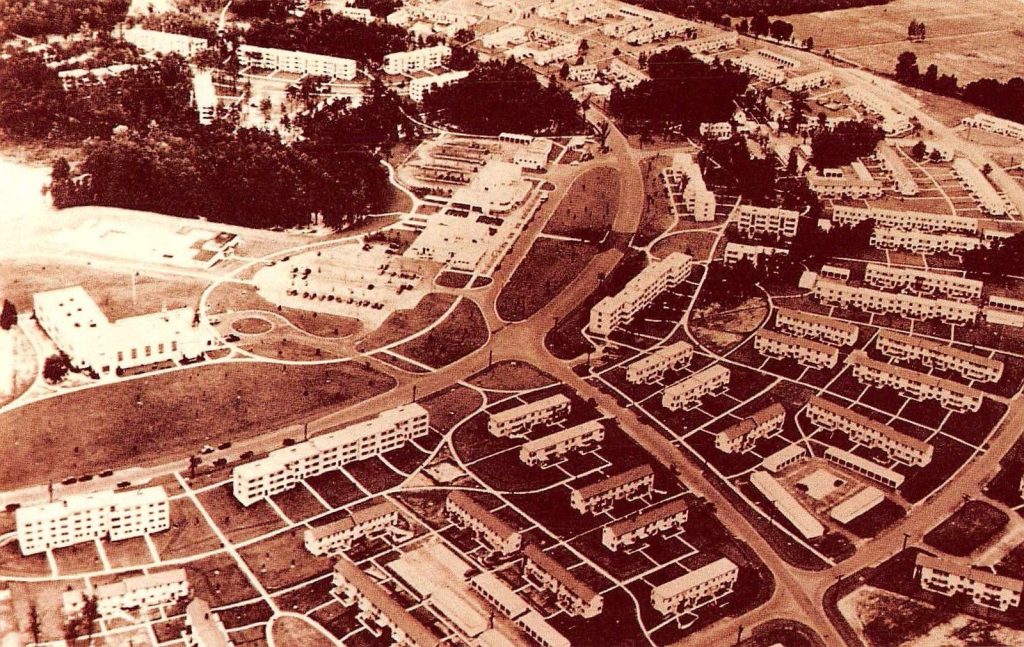 Greenbelt thrived during World War II, expanding into the acreage not originally developed. Thousands of new homes were built for workers who flooded the Washington area doing war work. Malls were constructed, a rail line arrived, and the Interstate highway system appeared. The original, core area of Greenbelt (“Old Greenbelt”) has been preserved as Greenbelt Homes, Inc.

Bill Burton began collecting Ossining, New York postcards when he lived in that Hudson Valley town. His collection expanded, of course, to include his college, the neighboring towns, and places where he and his wife traveled. In retirement, he's refocused on Delaware and the DelMarVa peninsula towns, but he’s just as likely to be found parked in front of the 25¢ boxes at shows.
PrevPreviousA Chautauqua Symphony Concert
NextWelcome to the Old DominionNext
5 Comments
Oldest
Newest Most Voted
Inline Feedbacks
View all comments
Marie Himmelberger

I didn’t know about the documentary. Do you recall when it was?

I was familiar with the name Rexford Guy Tugwell, but couldn’t have told you what the man was famous for until I read this article.

Postcards just scored another hit to my education! I grew up in Jackson Heights, NY, so was aware of planned apartment neighborhoods in a city environment. Jackson Heights was a speculative development, constructed in 1916, that hoped to bring people out from crowded New York City.
This story is so much more than a land speculation. The planning that went into it was so incredible that it has stood the test of time and continues to this day.