Concrete is the most versatile and used material in the world after water. It is used for construction, but not only, and it is all around us. However, do you know how concrete is made? Concrete is manmade composite material obtained by mixing cement (a powder), sand, gravel and water and specialized chemicals or admixtures. Cement is made using limestone (calcium carbonate) and clay from a quarry that are cooked in a rotary kiln at about 1,500 degrees Fahrenheit. Then, that mixture is ground and gypsum and other chemicals are added.

Another fact is that the cement needs the water to hydrate and gain strength, thus concrete should be cured under moist conditions. Cement has a chemical reaction with water that results in a hardened material that is the glue between the sand and gravel. Concrete does not dry; it hydrates and sets and hardens!

Cement was first used in 1300 BC in the Middle East just to coat and protect housing. It was made by crushing and burning gypsum and limestone. The Romans took advantage of the volcanic ashes from Vesuvius in Naples, to make a durable hydraulic cement.

Modern Portland cement, invented in 1824 by Joseph Aspdin, is now the standardized formula that uses the same basic ingredients.

Construction can also be fun as seen by these cats building a wall. The material in the bucket is mortar, i.e., a mixture of cement, water, and sand.

The postcard design is by Irina Zeniuk from Belarus. It seems to me that they will have a problem using the mortar as it looks like that it has too much water!

To produce the concrete, the raw materials need to be mixed. There are several types of mixers and postcards illustrate quite a few of them used in the field. No postcard has been found of a concrete mixer operating in a plant. 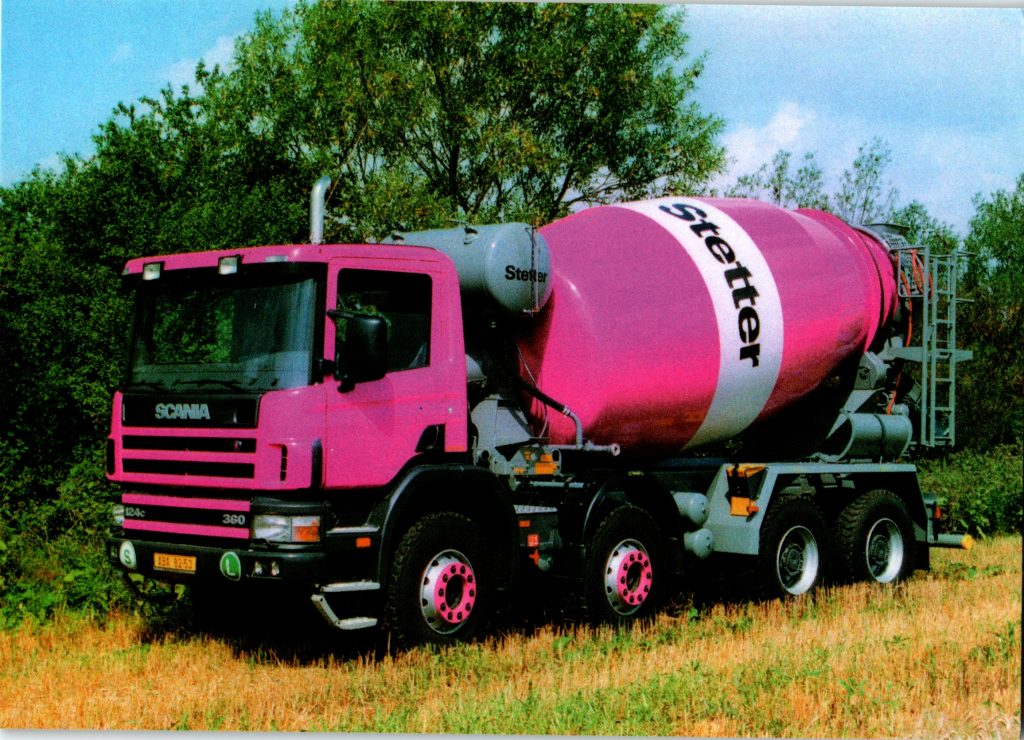 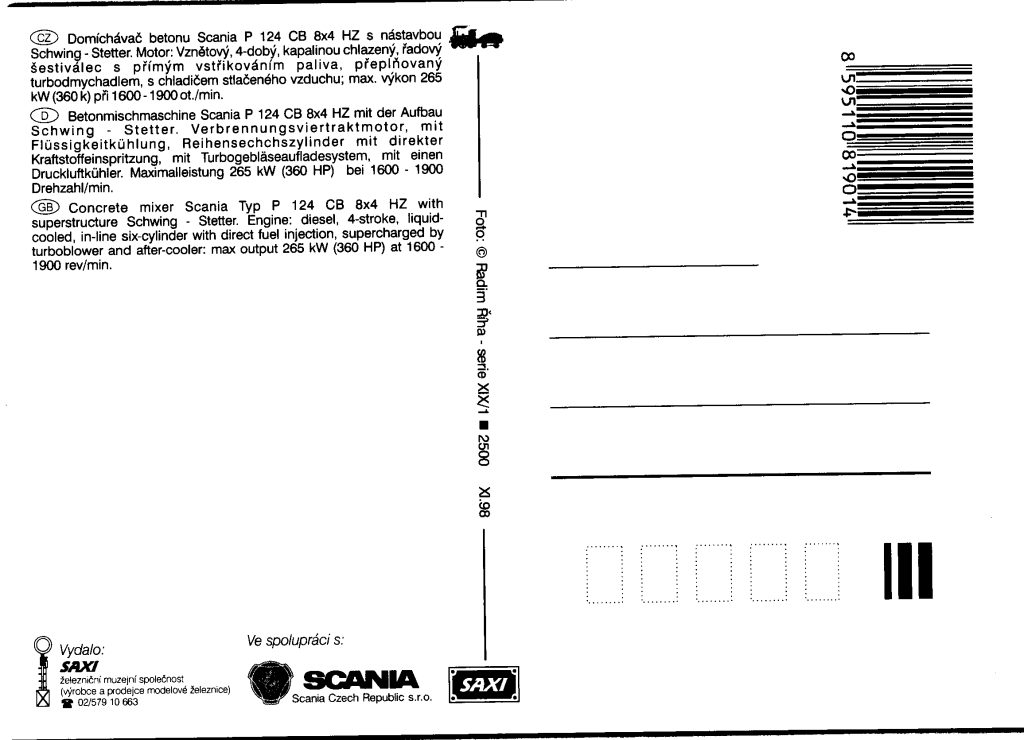 The most common concrete mixer is a truck. Technically, it is a reversible drum mixer, as it mixes rotating in one direction and then reverses the rotation for discharging. The concrete truck shown is pink, not a common color for a truck! It is a chrome postcard advertisement by a company from Czech Republic. On the back of the card, the specifications are given in three languages (Czech, German, and English). It is not too difficult to find concrete trucks on postcards.

Another type of mixer is a tilting drum mixer. In this case, the drum is tilted up to feed the materials and mixing, then, it is tilted down to discharge. This is a wonderful card. You can see the mixer and the horse that would move it to the next job! Finding a mixer drawn by a horse is typical from the early part of last century.

A postcard from Cuba, New York, shows a less common mixer – a non-tilting one. When using a non-tilt mixer, the materials are fed into one side and the concrete mixture comes out on the other.

Here is another great real photo postcard. It shows a homemade mixer. The message is, “Ralph in the middle of the others, Mr. Schiebert & son & Ralph & his cement mixer he made himself.” Obviously, they should have stated concrete mixer instead, but who is arguing when they give so much information! Is that a metal trashcan that was converted into a mixer with a small motor?

Concrete is not a new material, but it has continued to evolve significantly. The first concrete structures built were in Syria around 6500 BC. Usage was found in Egypt (3000 BC) and China (the Great Wall), mainly as mortar between stones. The first structure of cast in place (made with formwork at the construction site) was the Pantheon, Rome.

The Pantheon’s un-reinforced dome is the largest in the world. Larger structures, using reinforced concrete, started to appear in the late 1800s.

When building a dam, mixing and transporting the concrete is a serious matter! For instance, in the 1940s, to build the Grand Coulee Dam in Washington state, 12 million cubic yards of concrete were required.

This card shows the bucket used to transport the concrete. These buckets were typically moved into position with a crane and each was equipped with a lever that would open the bottom to discharge the concrete.

Another big project was the construction of the Panama Canal. That project required 4.5 million cubic yards of concrete!  It is possible to find many postcards showing the canal, but only a few show construction in progress. 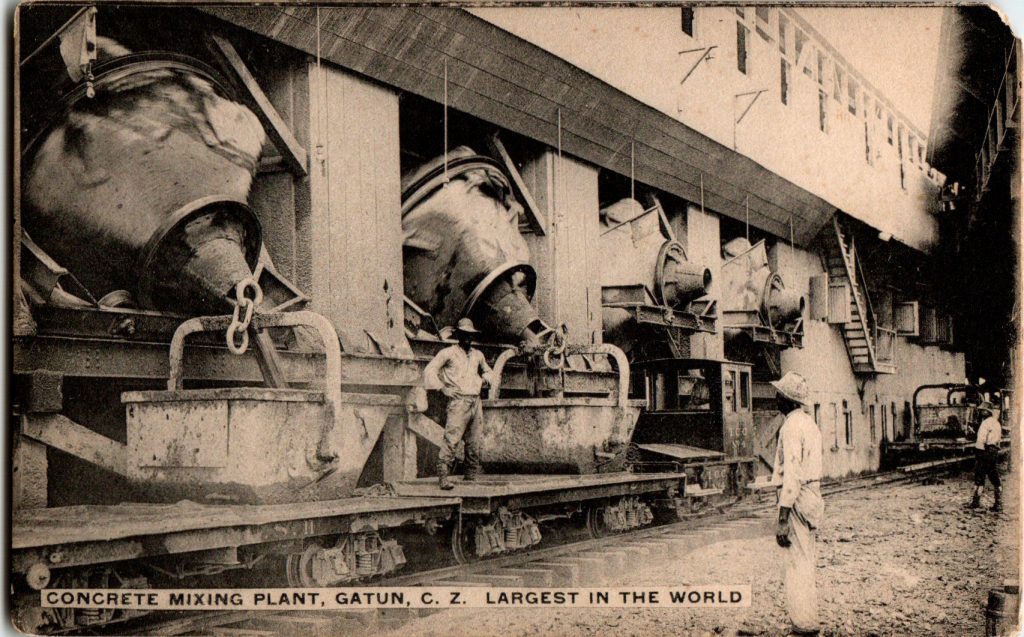 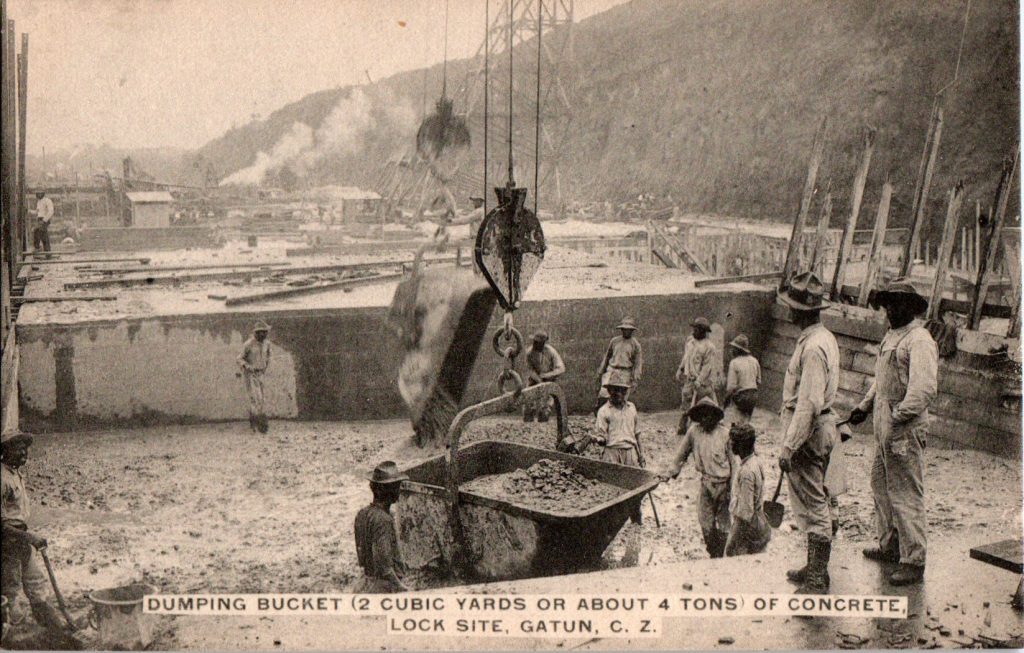 Cards showing the concrete mixers used for building the Gatun lock at the Panama Canal feature four tilting mixers used to load buckets transported by rail. As you can see the buckets are different from the one shown for the Grand Coulee dam, they are smaller. The second card shows how they were discharged, again a crane was needed.

Beginning in 1988 and through to 1994, a tunnel under the English Channel between the UK and France was built. It required 420,000 concrete segments to be put in place.

This card shows the positioning of one of those segments. It is dated 1989. Few postcards from the construction [of the 31- and 1/3-mile-long tunnel, commonly called The Chunnel] show the placement of the concrete, although there are at least four or five series on the construction. 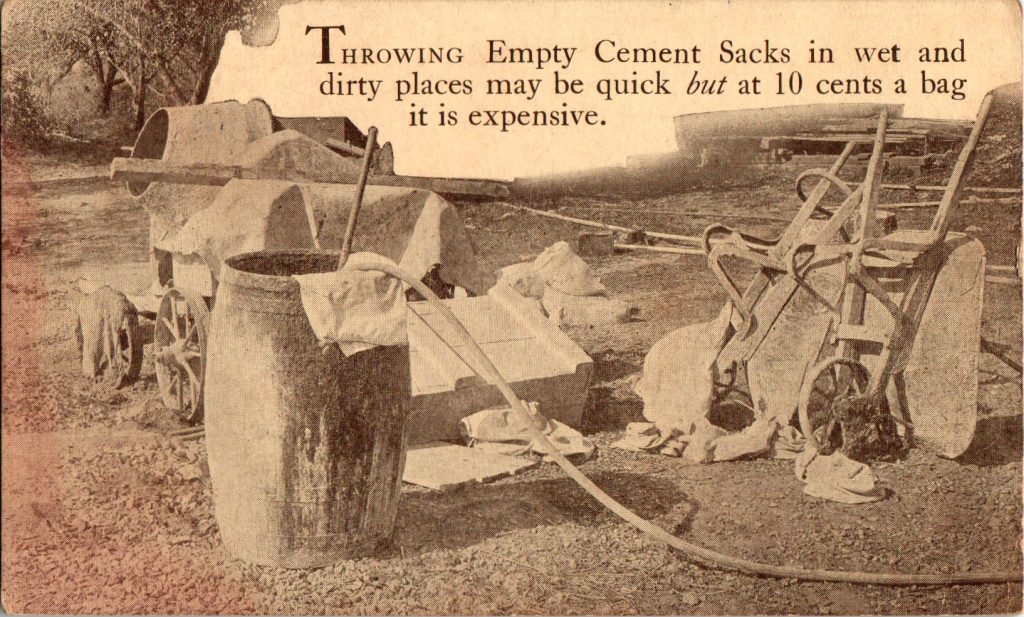 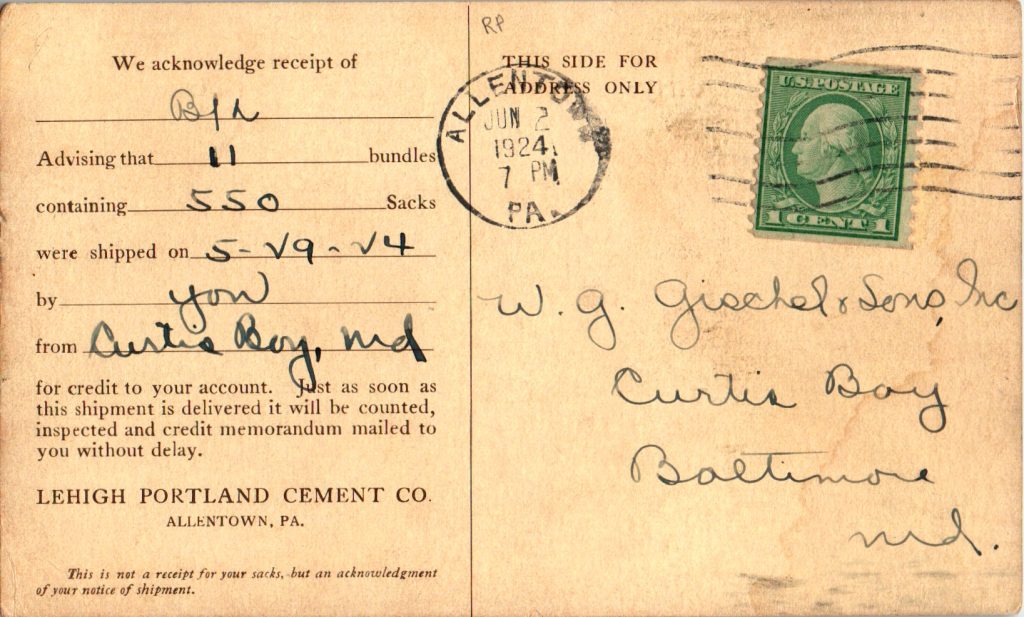 Postcards were also used for advertisement and to order concrete or cement.  One example from 1924 is this card. The front just asks that cement bags not be wasted, but the back is the receipt of shipment of 550 sacks of cement from Curtis Bay, Maryland.

Concrete is used for many purposes, too many to list here. Thus, I leave you with a very intriguing postcard: 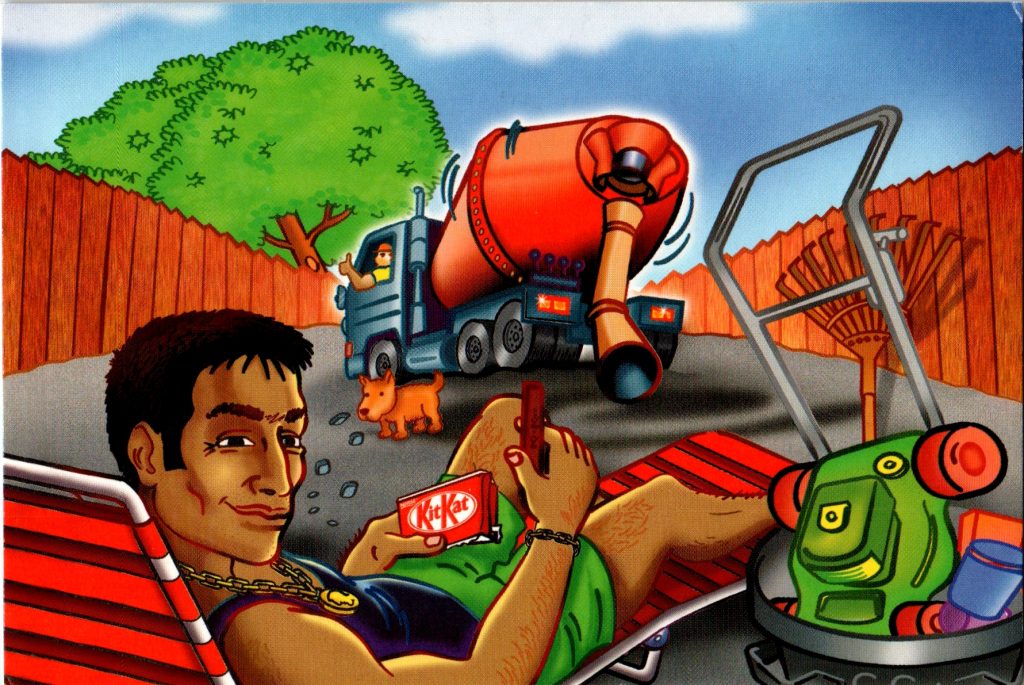 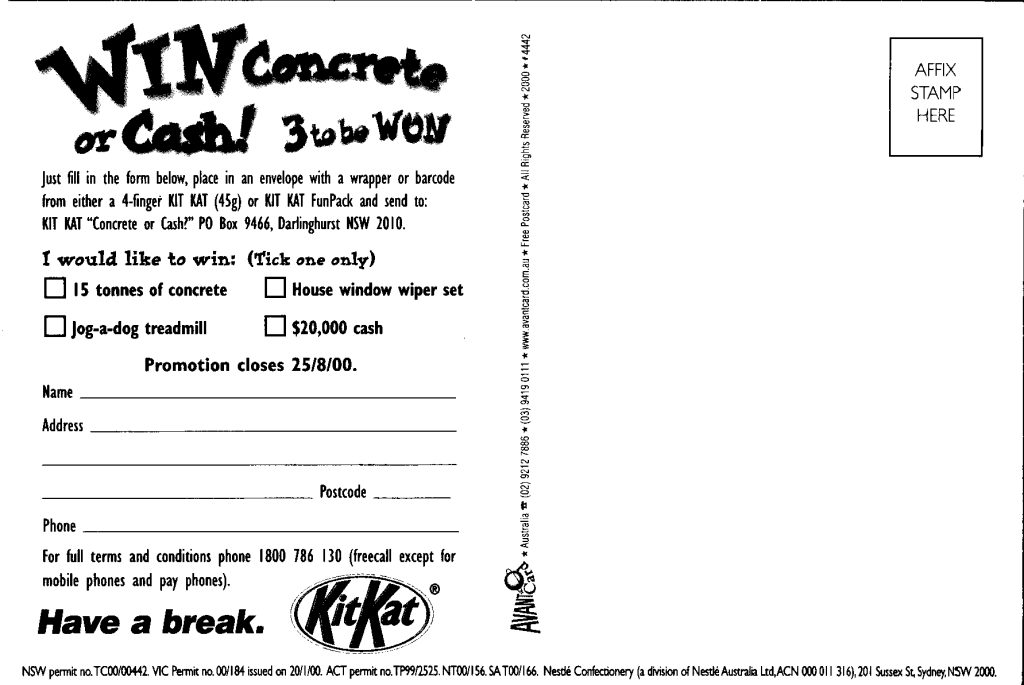 It is a competition and advertisement [card like the ones from the early 2000s that we called Rack Cards] for the KitKat (division of the Nestlé Confectionery, New South Wales, Australia).

[The image shows a property owner relaxing and enjoying a KitKat candy bar after he has just dumped his lawnmower and rake in a trashcan hoping he will never need them again, after having, presumably his back yard, covered with concrete.

Nestlé apparently teamed up with a local concrete company to create a competition] in which you could win 15 tonnes (that’s the way they spell tons in Australia) of concrete or $20,000 cash!]  I could not find who the winner was and what they selected.

I like this postcard as it combines two things that I like a great deal, chocolate and concrete … not in the same way, obviously!

Clarissa Ferraris is a deltiologist and a physicist. She has worked all her life as a researcher on concrete and cement technology. After her Ph.D. she published over 140 papers (under her real name of Chiara Ferraris). She has collected postcard since she was 15 years old. Her main interests are vintage cards from Italy, Girl Scouts, … and men at work with concrete. She lives in Columbia, Maryland.
PrevPreviousDecember 25 and the Calendar
NextProfessor Cizek’s Juvenile Art ClassNext
8 Comments
Oldest
Newest Most Voted
Inline Feedbacks
View all comments
David John Lutz

Concrete is so common but so important to all of us. It is great to be educated about how it is made and how it is used as shown on postcards from an expert! Thanks Clarissa

Very interesting article. I have only just learned about ancient Roman concrete from watching a few streaming TV shows about archaeology. It was a unique formula and has survived in perfect condition. The Roman formula has been much admired a mystery about how it was made. Thanks, Clarissa.

The term ‘cement mixer’ is used interchangeably with ‘concrete mixer’ here in the UK. PS I live on the south coast and can see Portland from my bedroom window.

That is very interesting. Thanks.

Thank you for this interesting article. My interest stems from two reasons: one – I have my Dad’s old iron wheelbarrow in which we mixed cement when needed and two – I worked on building Rocky Reach Dam with the cement finishers during my college days.